The Last Word Before Game 5 vs. North Carolina 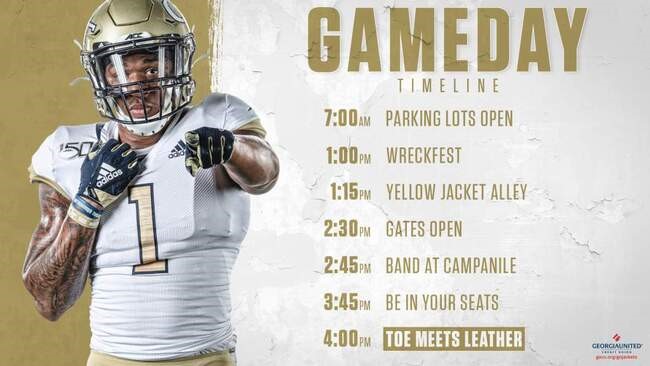 DID YOU KNOW?
Current Georgia Tech running backs coach Tashard Choice, former Yellow Jacket Derrick Morgan and longtime athletic trainer Jay Shoop are among the seven individuals being inducted into the Georgia Tech Sports Hall of Fame on Friday night. The inductees will also be honored during halftime of Saturday’s game.

VIDEO: Pads Off with RB coach Tashard Choice, who is entering the Georgia Tech Sports Hall of Fame this weekend. The segment is part of the #404Takeover, which airs tonight at 6 p.m. on Fox Sports Southeast.

Every game this season, we will HONOR Brandon Adams for being an incredible TEAMMATE. Tomorrow, @_kelton3 will wear 9️⃣0️⃣. #FAMILYoverEVERYTHING #LLBB 🖤 pic.twitter.com/2Paf5LRYJT

Hurricane Dorian has left dozens dead, hundreds missing and thousands homeless. After seeing how drastically the Bahamas were impacted by the Category 5 hurricane, student-athletes at Georgia Tech decided to take action by collecting items desperately needed by those who have been impacted. Please aid the student-athletes’ efforts by bringing donations to Saturday’s football game against the North Carolina. All collections will be sent to the Bahamas via the Bahamian Consulate of Atlanta.

Come out and hang with us tomorrow at WreckFest as we're 🖌️ autographs before the football game! pic.twitter.com/H1kC0I0arh