THE FLATS – Derrick Morgan, a veteran NFL defensive lineman, Alison Silverio, an All-American on Georgia Tech’s 2007 NCAA Championship women’s tennis team, and Cameron Tringale, a 10-year PGA Tour professional, are among seven former student-athletes and staff who have been elected to the Georgia Tech Sports Hall of Fame.

“It is an honor to welcome seven new members to the Georgia Tech Athletics Hall of Fame,” said director of athletics Todd Stansbury. “Each member has left a lasting legacy on The Flats, not just through their actions on the fields and courses, but in how they have represented Georgia Tech throughout their lives. We’re proud that they’re Yellow Jackets and privileged to induct them into our Athletics Hall of Fame.”

Tickets for the Oct. 4 induction dinner will go on sale next week, and complete information on pricing and how to purchase will be announced at that time.

Following are brief bios on the 2019 Hall of Fame class: 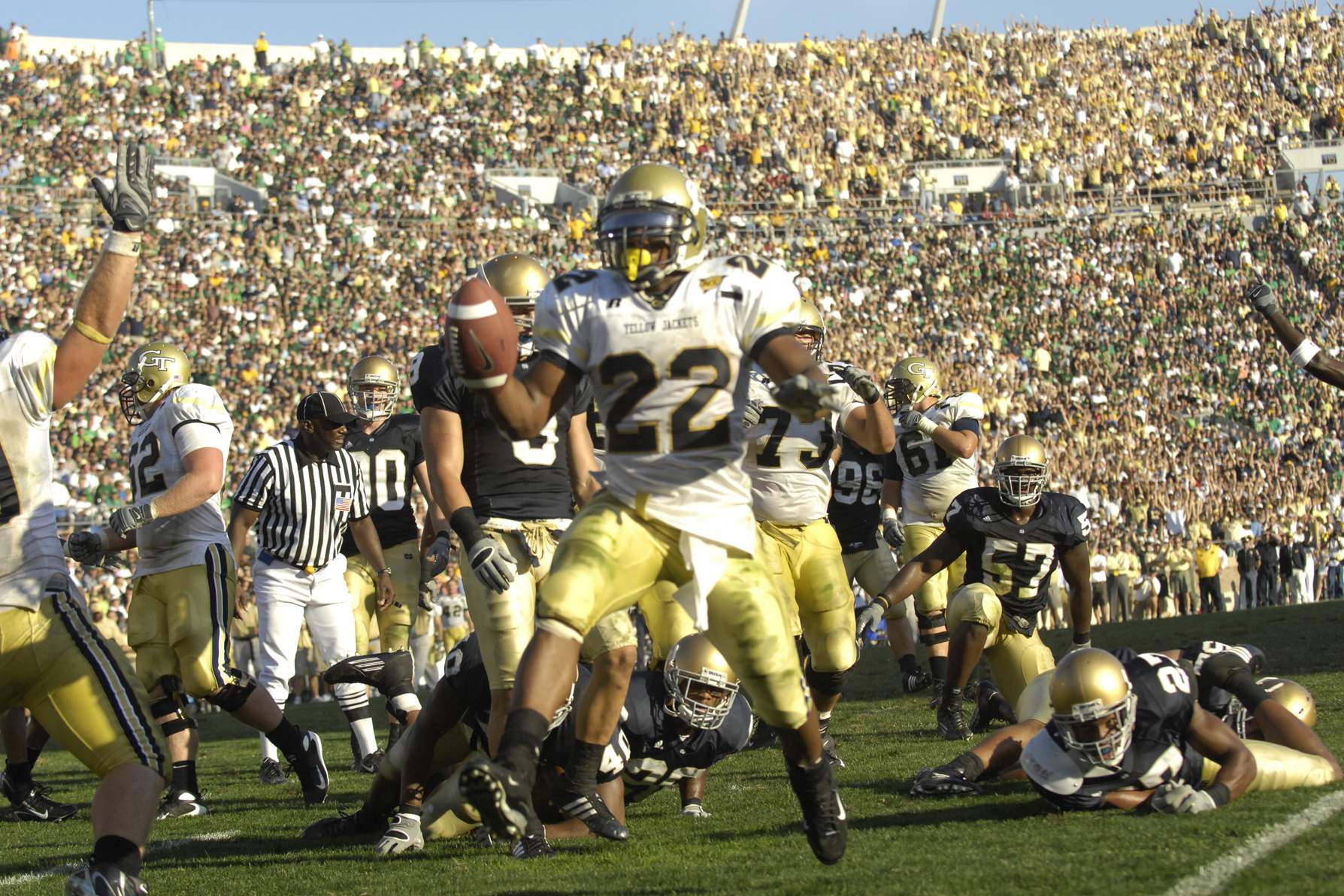 Despite playing only three seasons at Tech after transferring from Oklahoma following his freshman year, Tashard Choice shares the school record for most 100-yard rushing games in a career with 18. A second-team All-ACC honoree as a junior and a first-team selection as a senior, Choice also holds Tech records for most consecutive 100-yard rushing games (9 – 2006-07), most single-season 100-yard rushing games (9 – 2006) and most single-season rushing attempts (297 – 2006). In addition to those accomplishments, Choice ranks fourth in Tech history in career rushing yards (3,365), fourth in career rushing attempts (675) and sixth in career rushing touchdowns (28). Choice also holds the No. 2 and 6 positions in most rushing yards in a single season (1,473 yds. in 2006; 1,379 yds. in 2007), making him one of two players to hold two of the six best rushing seasons in program history. Choice owns two of the top 15 single-game rushing totals in school history (204 yds. vs. Miami, 2007 – 10th; 196 yds. vs. Notre Dame, 2007 – 14th) and owns six of the top 20 single-game rushing attempts totals in school history. Selected in the fourth round of the 2008 NFL Draft by the Dallas Cowboys, Choice played six years in the NFL for the Cowboys and the Buffalo Bills. He returned to campus in January to become the Yellow Jackets’ running backs coach under new head coach Geoff Collins. 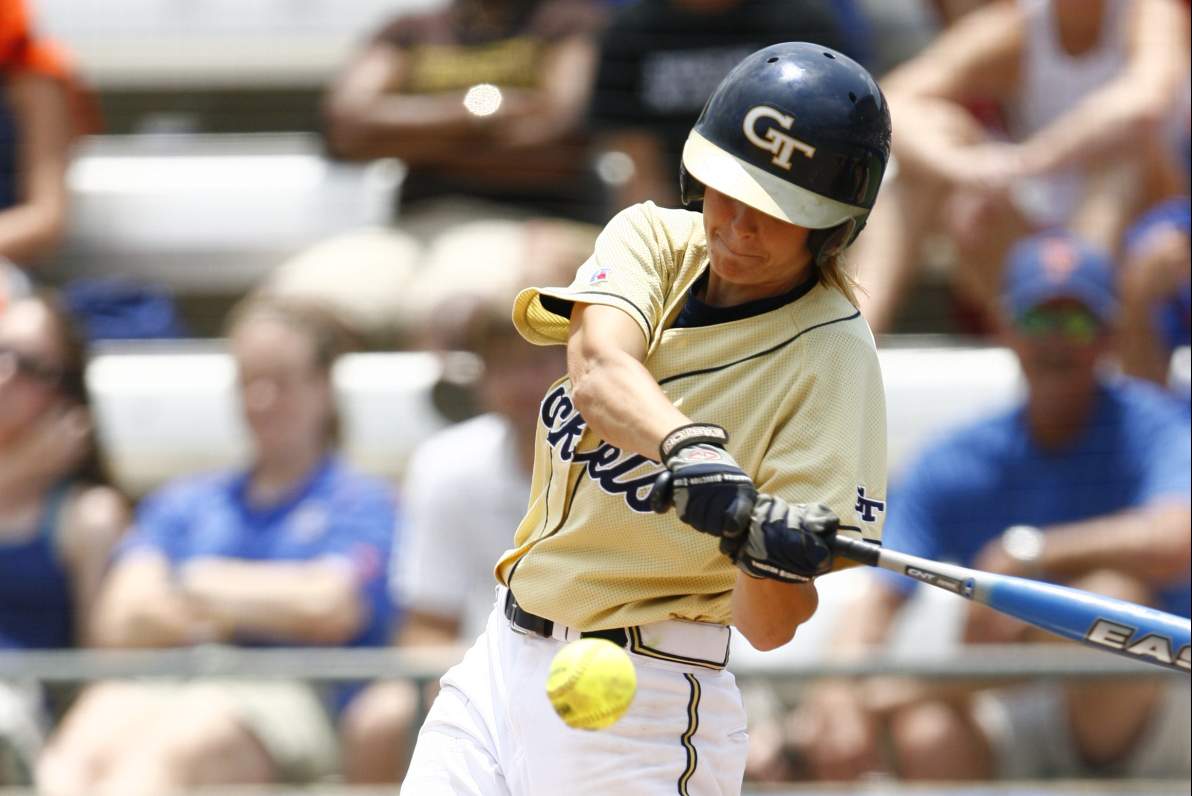 Only the second Georgia Tech player ever to garner first-team All-America honors, Caitlin Lever did so in 2007, when she also was one of the 10 finalists for the USA Collegiate Softball Player of the Year Award. The Canadian was named a first-team All-American by the NFCA in 2007, and also earned first-team All-ACC honors in 2005 and 2007, leading the Yellow Jackets to 153 victories over three years, including a school-record 54 in 2007. She made the ACC All-Tournament team in 2006 and 2007, when the Yellow Jackets finished third and second, respectively, and led the Yellow Jackets to the ACC regular-season and tournament titles in 2005. She set a Tech record for hits in a season (94) in 2007, and remains fourth in career batting average (.337) and posted top-five numbers for a season in several other categories. Lever played for the Canadian national team in the 2008 Beijing Olympics, and played professionally following her graduation from Tech. She now lives in Buffalo, N.Y. 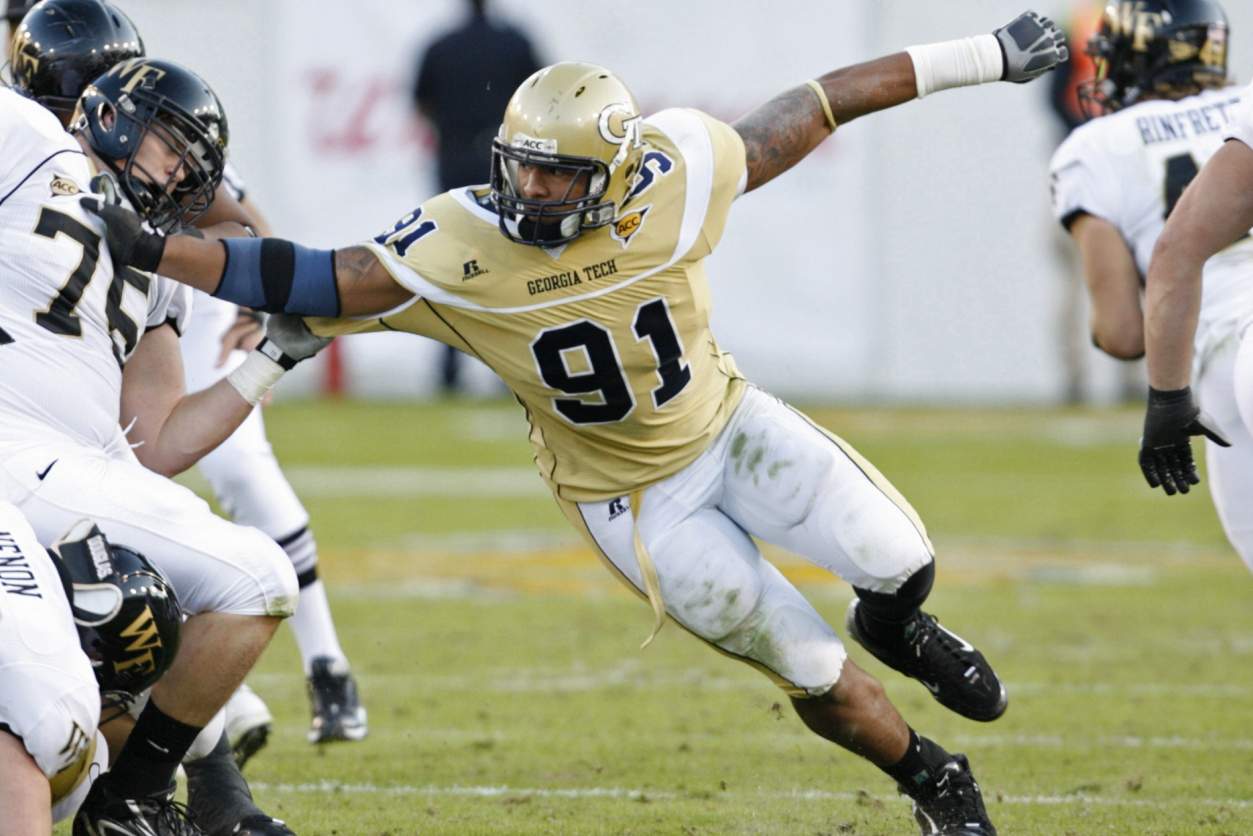 One of the best pass rushers in Georgia Tech history, Derrick Morgan is the only Tech football player to be named the ACC Defensive Player of the Year, which he accomplished in 2009. A first-team All-American by the Associated Press, the American Football Coaches Association and Pro Football Weekly in 2009, Morgan also made the All-ACC first team, culminating a career in which the Yellow Jackets won 27 games and made back-to-back ACC Coastal Division titles and appearances in the ACC Championship game. Morgan also was a finalist for the Ted Hendricks Award (college football’s top defensive end) in 2009 after recording 12.5 sacks and 18.5 tackles for loss, which rank fourth and seventh, respectively, in Tech history. Morgan amassed 19.5 sacks and 29.5 tackles for loss in three seasons, which stand as the second-most recorded in a three-year career on The Flats. Selected No. 16 overall in the 2010 NFL Draft by the Tennessee Titans, he was the ninth-highest NFL Draft pick in Georgia Tech history. Morgan has amassed 306 tackles and 44.5 sacks in nine NFL seasons, all with the Titans. 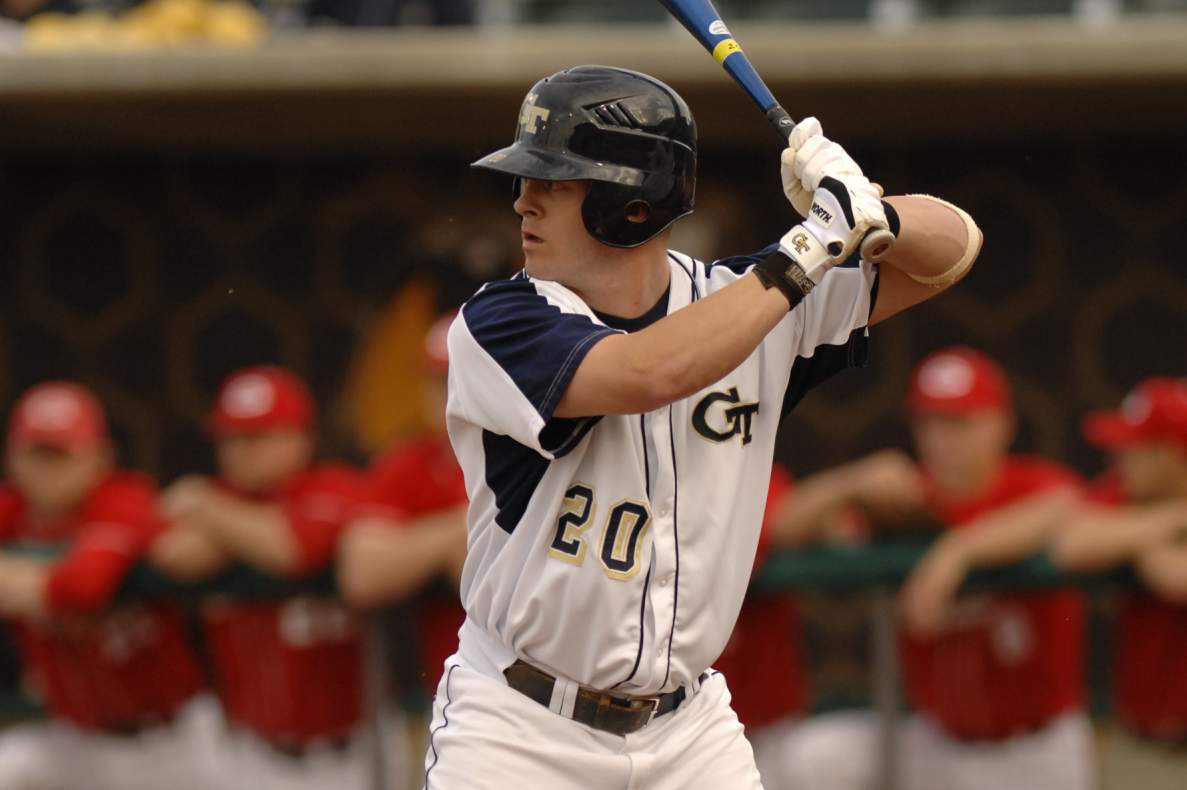 Helping lead Georgia Tech to an ACC title and a College World Series appearance with his bat and his arm during his three-year career, Danny Payne earned first-team All-America honors from Baseball America in 2007 and was a finalist for the Golden Spikes Award, given to the nation’s top amateur player. The left-handed outfielder and pitcher made the All-ACC first team in 2006 and 2007, leading the Jackets in batting both years and putting together a school-record 80-game hitting streak in the process. The Woodstock, Ga., native finished his career with a .332 batting average, 18 home runs, 45 doubles, six triples, 120 RBI and 64 stolen bases over 163 games played, helping the Yellow Jackets to the ACC regular-season and tournament titles in 2005. He also helped Tech win NCAA regionals in 2005 and 2006, and advance to the College World Series in 2006, winning 50 games. A first round supplemental draft pick of the San Diego Padres in the 2007 MLB Draft, Payne now lives in Canton, Ga. 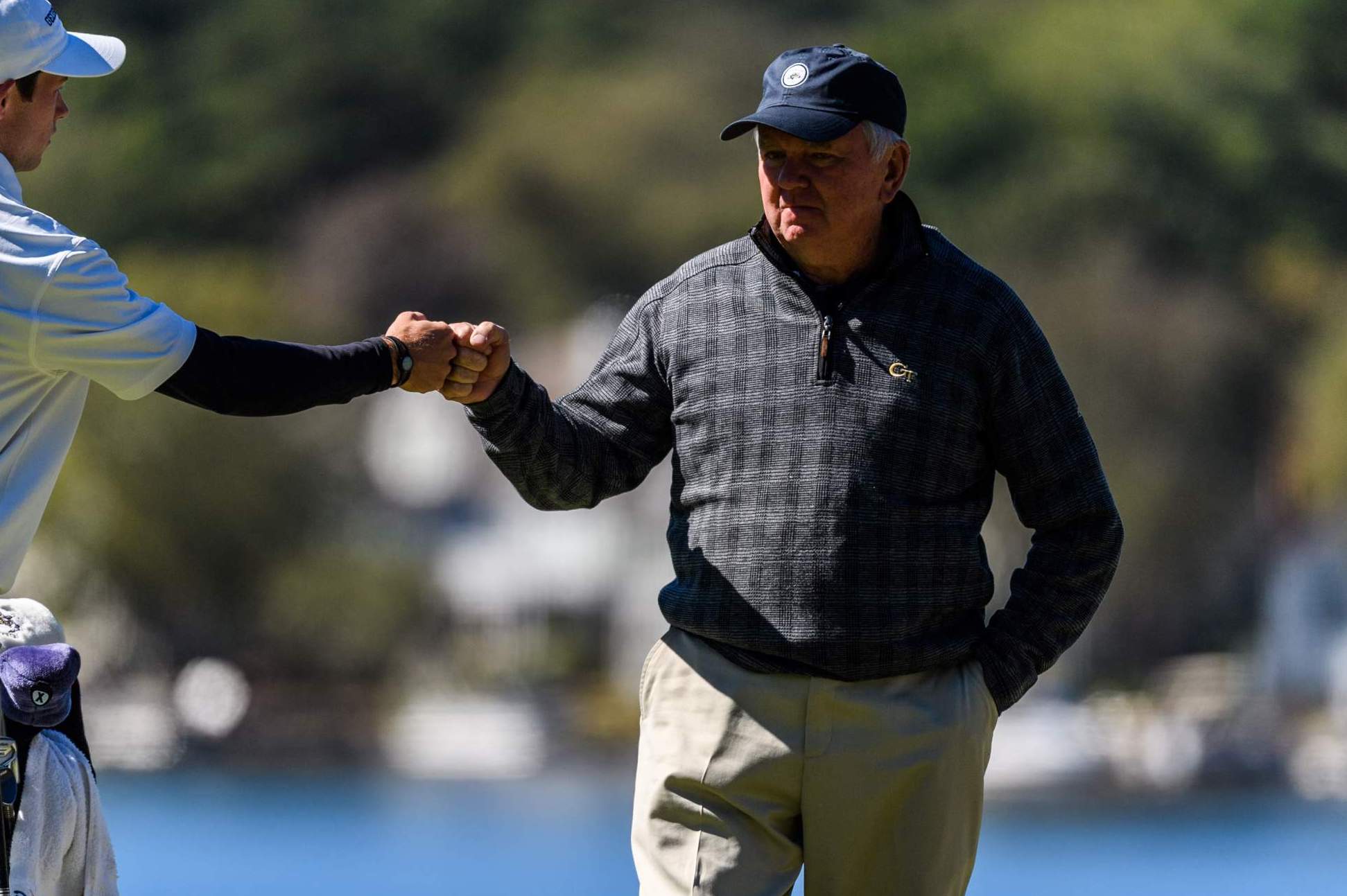 The most recent in a long line of legendary sports medicine practitioners in Georgia Tech athletics, Jay Shoop spent 29 years as Georgia Tech’s director of sports medicine over two stints – 1987-99 and 2002-17. His 29 years at Georgia Tech were part of a 47-year career that included stints with Furman (1970-76), the Atlanta Falcons (1976-82), the Michigan Panthers of the USFL (1983-84), the Tampa Bay Buccaneers (1985-86) and the Detroit Lions (2000), all but seven of which were as a head athletic trainer. Shoop served as the chief athletic trainer for the 1996 Summer Olympics in Atlanta and the 1994 Goodwill Games in St. Petersburg, Russia. He was inducted into the National Athletic Trainers Association Hall of Fame in 2012, and has also been inducted into the East Tennessee State University Athletics Hall of Fame (his alma mater) and Georgia Athletic Trainers Hall of Fame. Among his many other pursuits, Shoop has also authored the official history of the Southeastern Athletic Trainers Association. 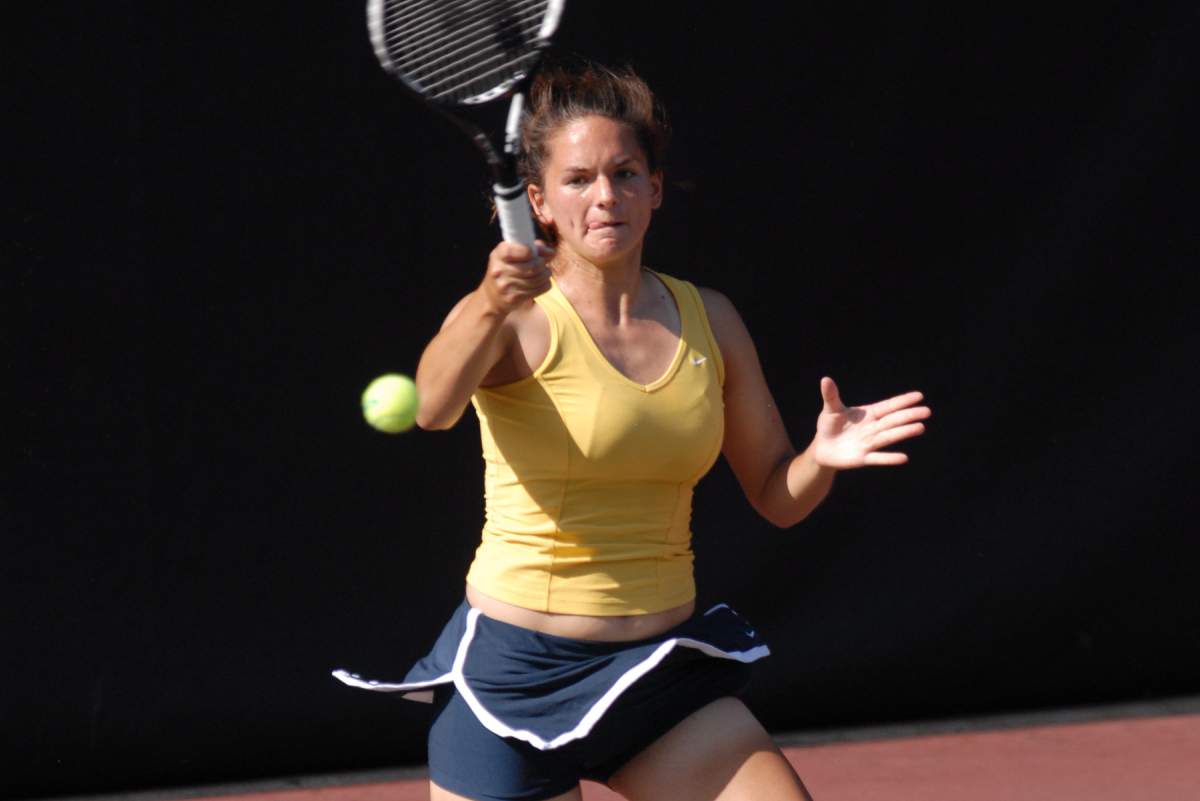 A member Georgia Tech’s first and only NCAA Championship team, Alison Silverio closed out her Yellow Jacket career by winning the clinching match at the No. 2 position for Tech’s 4-2 victory over UCLA in the championship match in Athens in 2007, and earning the NCAA Tournament MVP honor in the process. The 2007 team captain earned All-ACC honors in 2005 and 2007. She also received the ITA Region Arthur Ashe Award for Leadership and Sportsmanship in 2007, the ITA Region Cissie Leary Award for Sportsmanship in 2006 and the ACC Weaver-James-Corrigan Postgraduate Scholarship in 2007. She helped lead Tech to three ACC Championships (2005, 2006, 2007), and earned MVP honors in the 2005 championship, winning the clinching match for Tech. Twice a member of the ACC All-Academic team and an ITA Scholar-Athlete, Silverio ranks fifth in Tech’s all-time record book in doubles wins in a season with 29 in 2004-05 and 2005-06, is fourth in career singles wins with 106 and third in career doubles wins with 98. Silverio has been a head coach on the Division I level the last five years, the first four years at Oregon and now at Notre Dame. 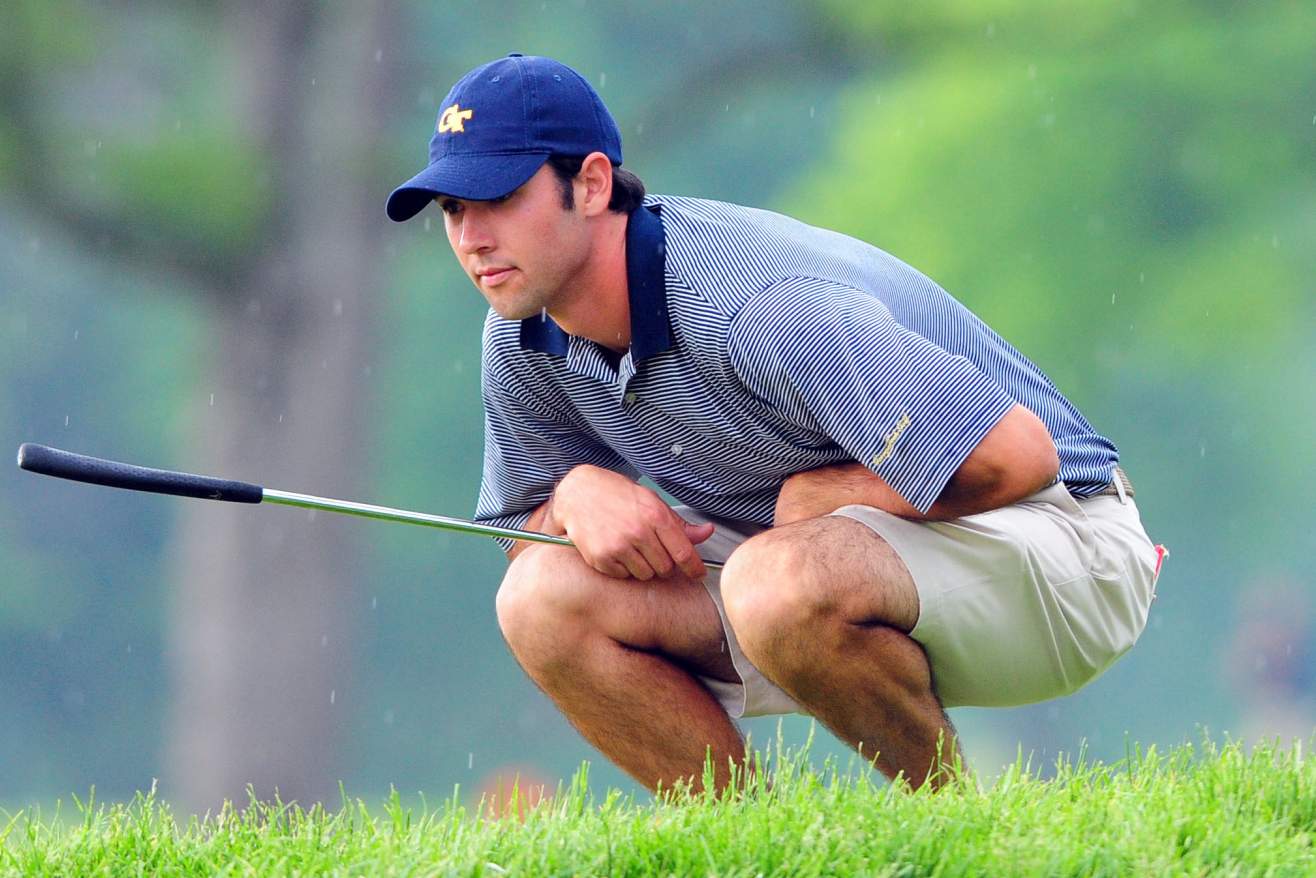 A winner of four tournaments during his career, Cameron Tringale helped Tech to three Atlantic Coast Conference titles and three trips to the NCAA Championship finals. He was named a first-team All-American by the Golf Coaches Association of America and Golfweek magazine as a senior in 2009, and a second-team choice by both organizations as a sophomore in 2007. The California native was named second-team All-American by GCAA as a freshman, when he won the ACC championship and the UH-Hilo Intercollegiate, and won twice more, the Brickyard Collegiate Championship and the Southern Highlands Championship, as a senior. In three NCAA Championship appearances, he finished eighth, ninth and 18th, and he posted finishes of 1st, 2nd, 13th and 3rd, respectively, in four ACC Championships. Overall, Tringale compiled 22 top-10 finishes in 46 events over the course of his career and a 71.81 stroke average, which still ranks fourth in Tech history. He remains the last Georgia Tech player to represent the United States in the Walker Cup (2009), the top international amateur competition, and also played for the U.S. in the 2009 Arnold Palmer Cup (for college players). Tringale, who currently lives in Florida, has been a member of the PGA Tour since 2010.