Inside The Chart: Southers Comfort

Fun fact about Jared Southers, Georgia Tech’s graduate transfer offensive lineman. As a redshirt freshman at Vanderbilt in 2016, he appeared in the last 10 games for the Commodores.  That meant Southers made his collegiate debut in Vanderbilt’s third game, a road contest against…

He half-laughed, half-winced at the memory. The Yellow Jackets pounded the Commodores 38-7 that day.

“I was really nervous. Just getting that first snap was good for me to calm my nerves. But I was just like, ‘Wow, I’m finally playing in college,’” he recalled.

Southers has now made Bobby Dodd Stadium his permanent home, playing his final season for Georgia Tech while working toward his master’s degree in economics. In a transitional year for the Yellow Jackets’ offensive line, head coach Geoff Collins signed Southers to give him a veteran, physically ready presence up front. The 6-5, 310-pounder played in 27 games over his final three seasons at Vanderbilt, which ran a blocking scheme similar to Tech’s.

The Jackets have had to tap into that experience more than expected lately. Georgia Tech began the year with just 11 seniors, the third-fewest in the Football Bowl Subdivision. In recent weeks they’ve lost tackle Jahaziel Lee and center Kenny Cooper to season-ending injuries. With Scott Morgan also nursing an injury in recent weeks, Southers suddenly became the lone senior offensive lineman contributing significant minutes for the Yellow Jackets.

For his part, Southers downplays his status as the elder statesman of Tech’s blocking overhaul. 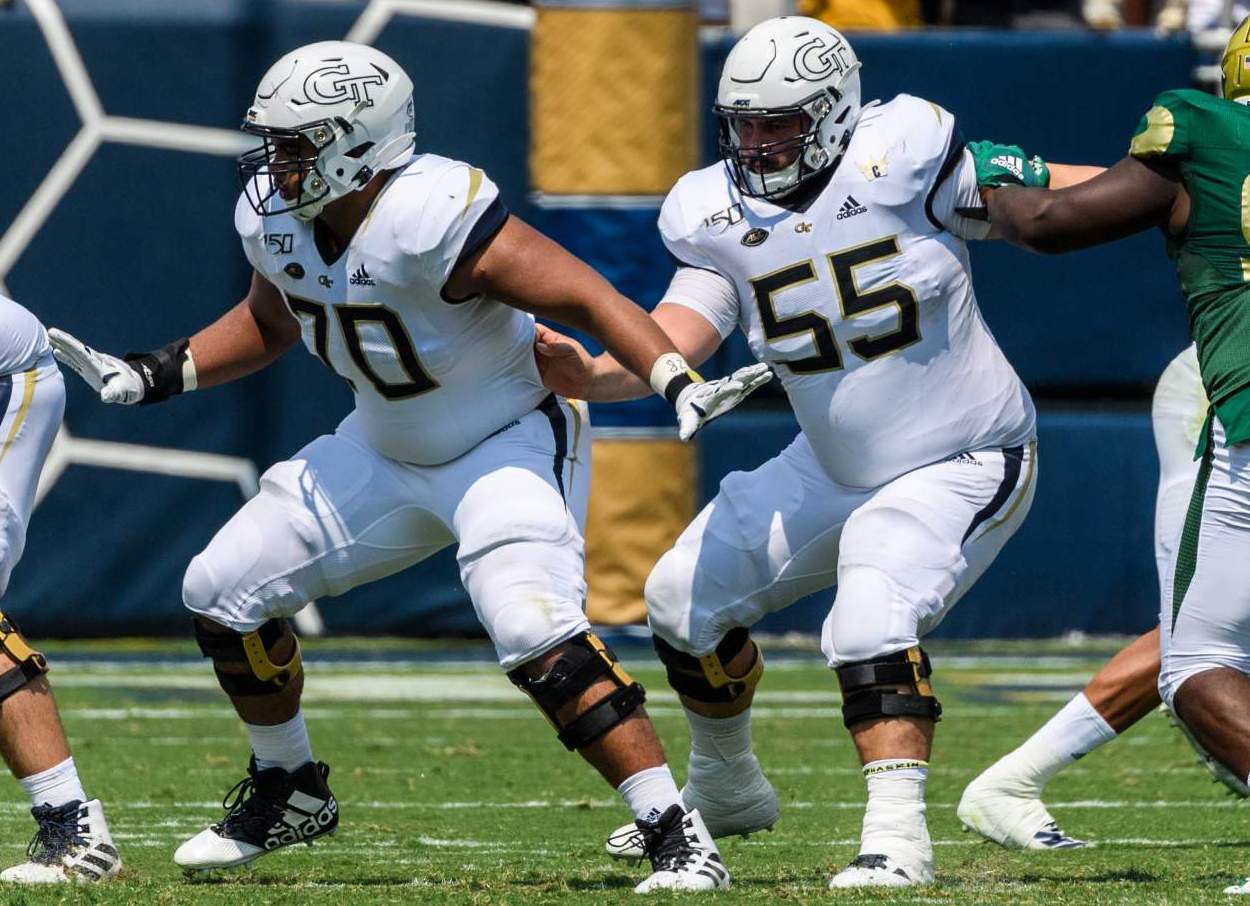 Jared Southers (70) and Kenny Cooper (55) protect the quarterback during Georgia Tech’s 14-10 win over USF on Sept. 7. With Cooper and Jahaziel Lee out for the season with injuries, Southers is the only remaining senior seeing significant playing time across the Yellow Jackets’ offensive front.

Georgia Tech’s coaches knew what they were getting in Southers – namely, because they had gotten him once before. The South Orange, N.J., native originally committed to Temple for his grad transfer season.

“I had a good relationship with that Temple staff. Coach Weeze [Georgia Tech tight ends coach Chris Wiesehan] actually recruited me back in high school. So when the whole grad transfer process started, one of my good friends, Mike Dogbe, who was up at Temple, got me in touch with Coach Collins. I went up there on a visit. That whole relationship with Coach Wiesehan picked up where it left off,” he recalled.

Southers committed to Temple. Four days later, Collins told him he was leaving for Georgia Tech. A scholarship offer went with him.

“I just believed in that staff and trusted Coach Collins so much that I decided to follow him down here.  And hearing Coach Key was coming down here too, that was just icing on the cake,” Southers said.

Even for someone playing his fifth year of college football, Southers says his skills have grown tremendously under the tutelage of assistant head coach and offensive line coach Brent Key, a Georgia Tech grad who was brought in to oversee one of the biggest transformations in recent college football history – the overhaul of an offensive front that paved the way an option offense to one that is leading the charge for a spread, NFL-style attack.

“I get better every day working with him, just because he’s so detail-oriented. He thinks about so many different little things that the average offensive line coach doesn’t even know about. From alignment to different technique pieces, offensive formations and motions that help us out and make our jobs easier – the detail aspect of that is really impressive,” Southers said.

That attention to detail has allowed Southers to fill a number of spots on the injury-plagued Tech offensive line. Heading into Saturday’s game against North Carolina at Bobby Dodd Stadium (4 p.m. ET, Georgia Tech Sports Network from Learfield IMG College), Southers has already rotated at right tackle and right guard.

For an offensive line, nothing fosters growth like continuity. Nothing undermines it faster than injury.  The Yellow Jackets haven’t had that luxury so far. Southers knows Tech’s fortunes may rise and fall this year based on the play of his teammates. But he also sees on a granular level the progress his offensive line is making – and he knows a breakthrough isn’t far away.

“The goal is to improve every day. We’ve improved a lot in terms of our execution and technique. That’s something that’s very, very promising. I’m looking forward to it, and getting these wins going,” Southers said.

If the Yellow Jackets get cooking, it wouldn’t be the first time. Over the summer Southers started what he called “Chef Saturdays,” where he researched and cooked a new dish for him and his roommate, fellow grad transfer Tyler Davis (the chicken piccata and shrimp fettuccine alfredo were particular hits).

Chef Saturdays have since given way to Football Saturdays for Southers. He now pursues the taste of victory instead – while hoping to erase the taste of that first experience at Bobby Dodd.