VIDEO: Georgia Tech and Children’s Healthcare of Atlanta are flipping the script on the traditional superhero narrative with the unveiling of the Yellow Jackets’ newest football uniform

THE FLATS – Georgia Tech football, Children’s Healthcare of Atlanta and adidas unveiled an alternate “Cape Day” uniform that will be worn by Georgia Tech when it hosts North Carolina on Oct. 5 at Bobby Dodd Stadium.

Georgia Tech and Children’s are flipping the script on the traditional superhero narrative with the unveiling of the Yellow Jackets’ newest football uniform, which is part of adidas’ 2019 Strategy Uniform series. Throughout the world, children look up to athletes as heroes – but with this uniform, the Jackets honor the true heroes in the Atlanta community, kids that are battling illnesses and injuries at Children’s Healthcare of Atlanta. Cape Day was first introduced by Children’s in 2014.

The onyx gray uniform, a first for Georgia Tech, features sleek hexagon patterns with metallic Tech gold accents. Adorned on the back of the uniform is a crest paying homage to Cape Day, an annual tradition in the Atlanta community that honors the superhero kids that fight every day at Children’s Healthcare of Atlanta. The jersey features a body-mapping design, using a ribbed, knit pattern on the chest and shoulder pads to produce a refined fit, while knit engineered mesh channels feature Climacool® technology to provide enhanced breathability and cooling zones.

Yellow Jackets will honor superheroes at Children's Healthcare of Atlanta by wearing alternate unis vs. UNC on Oct. 5 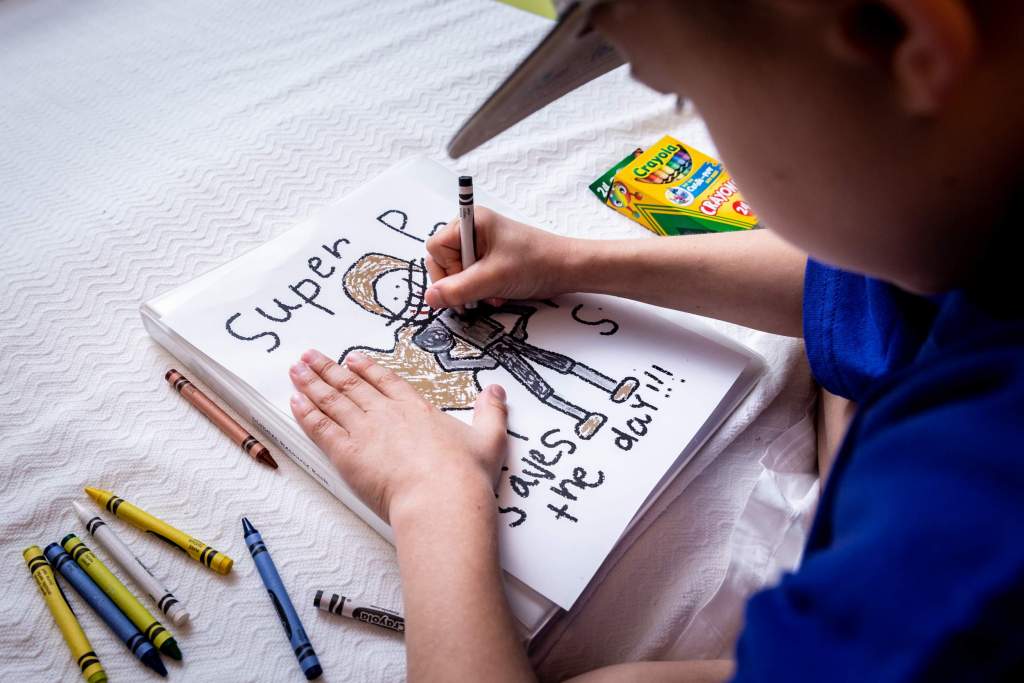 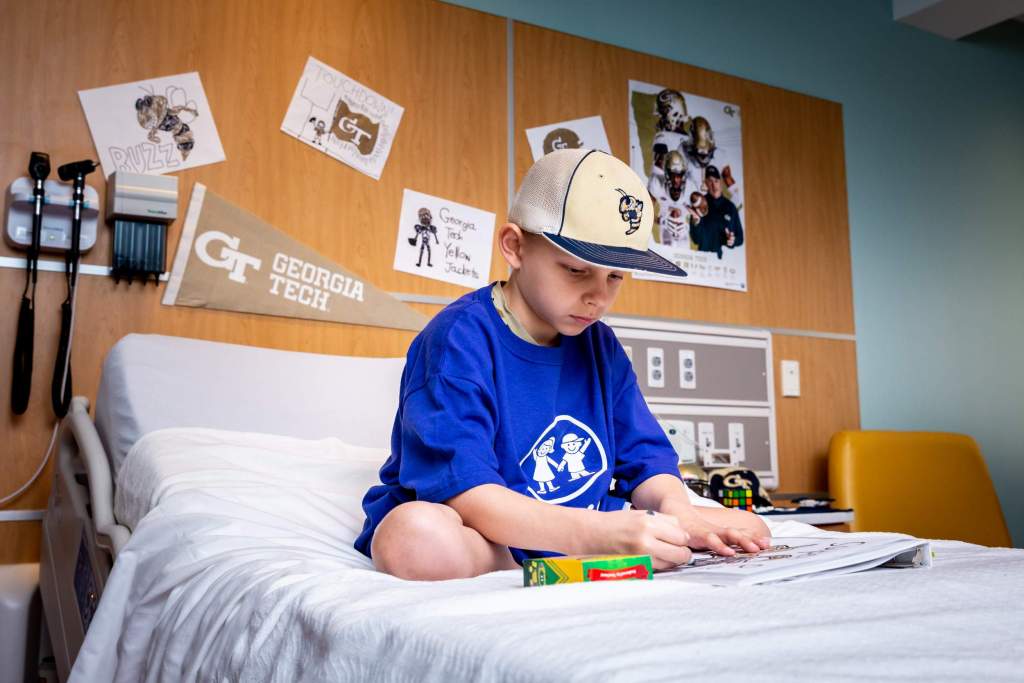 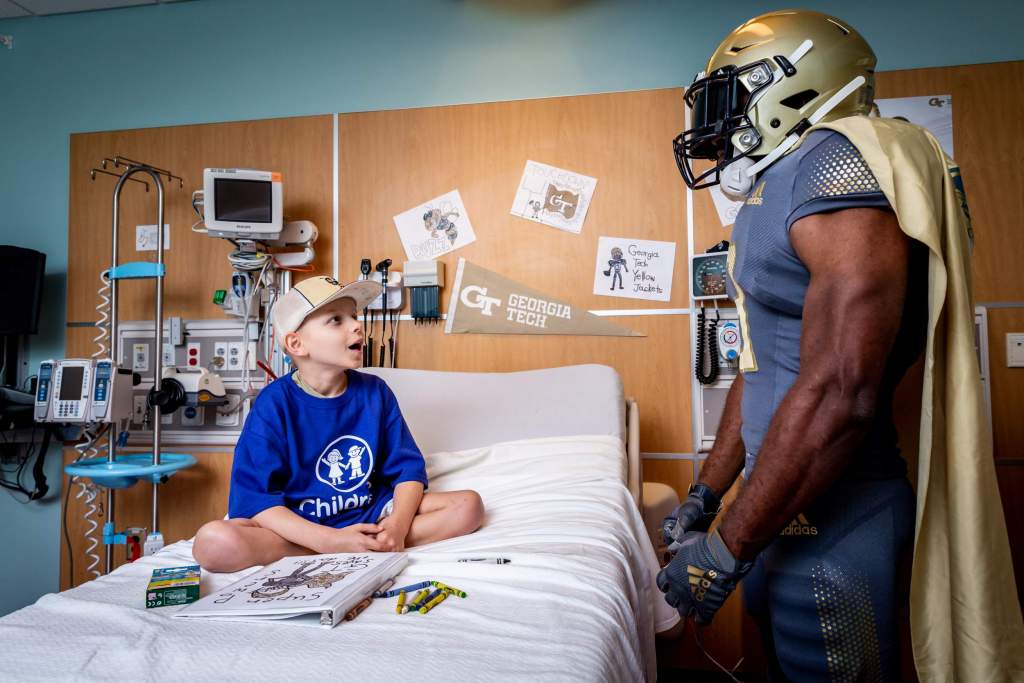 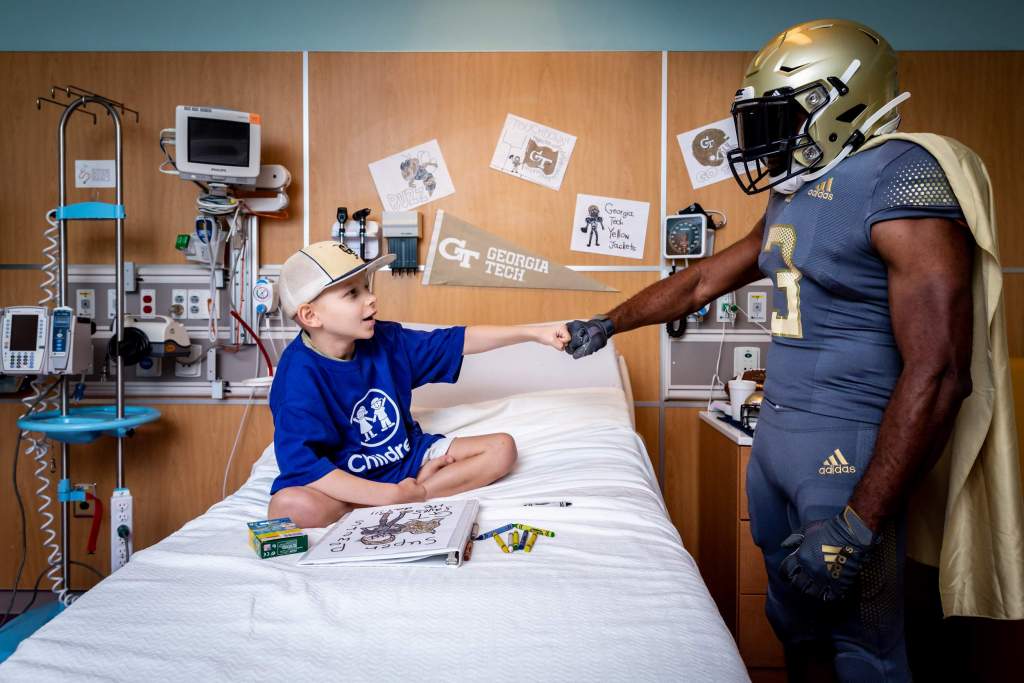 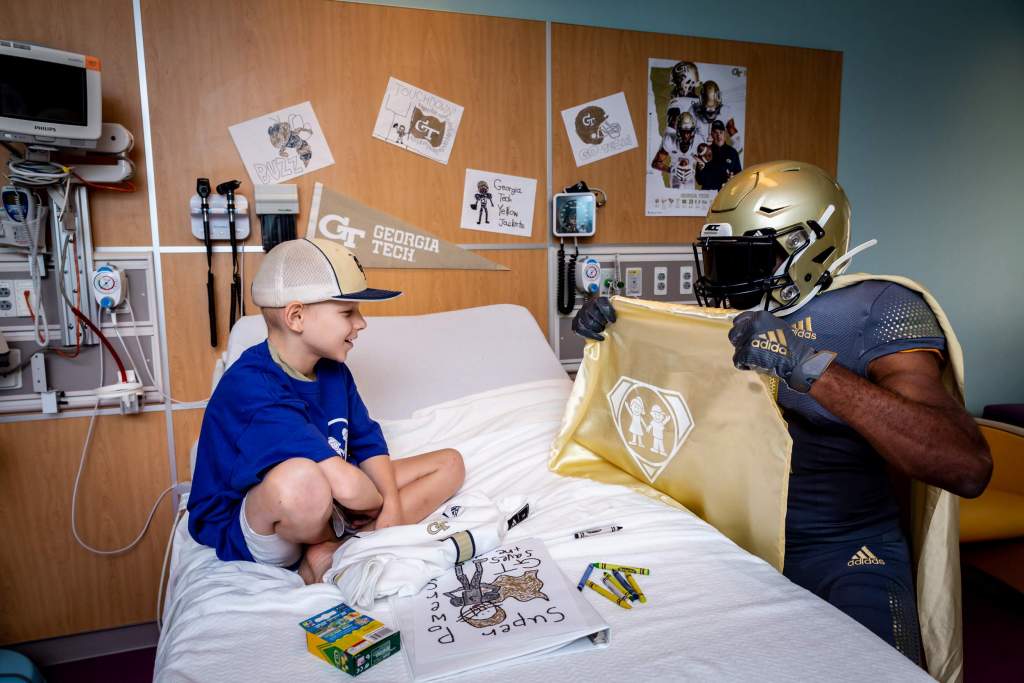 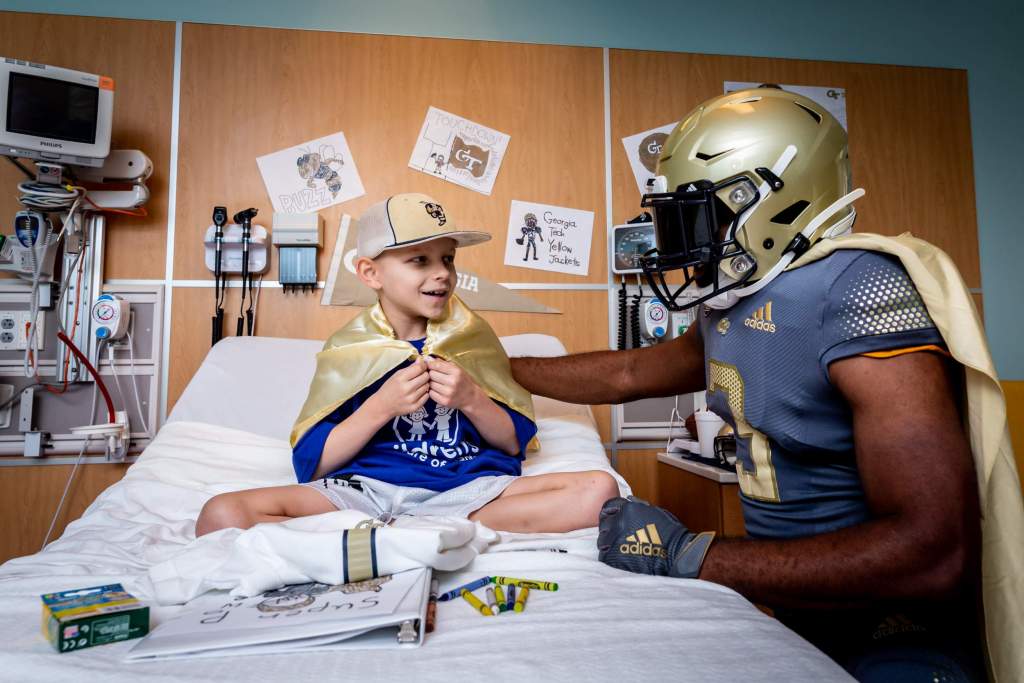 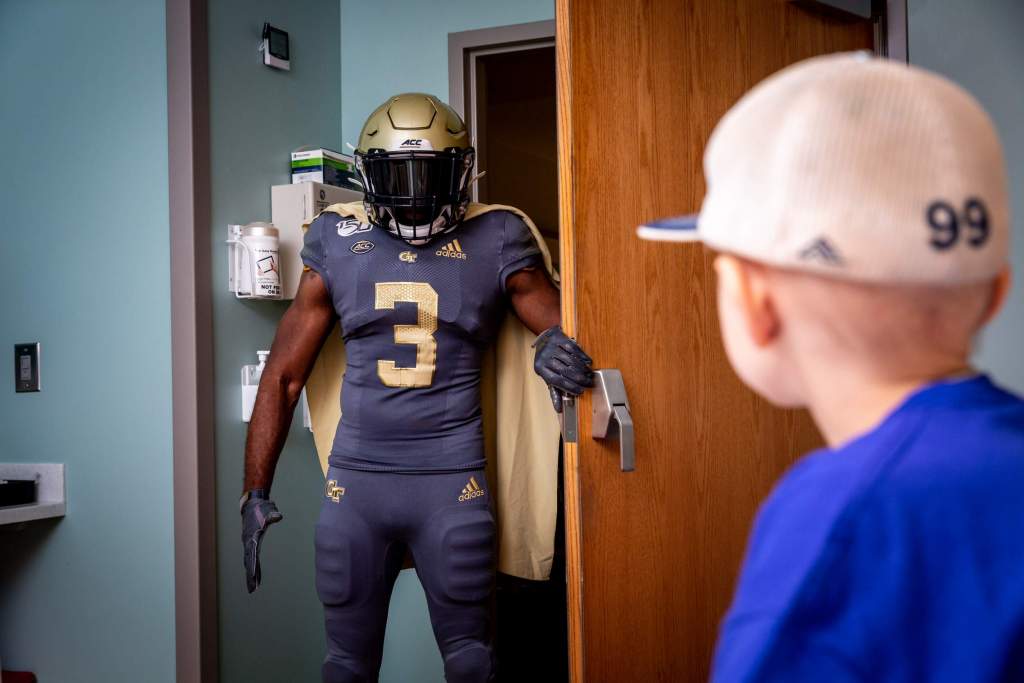 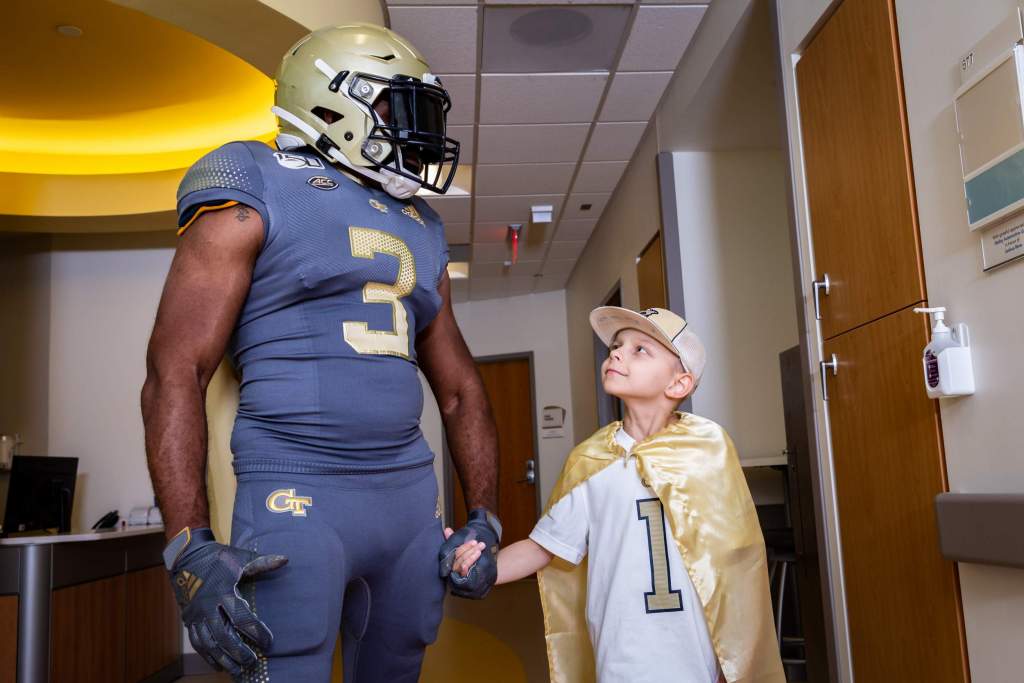 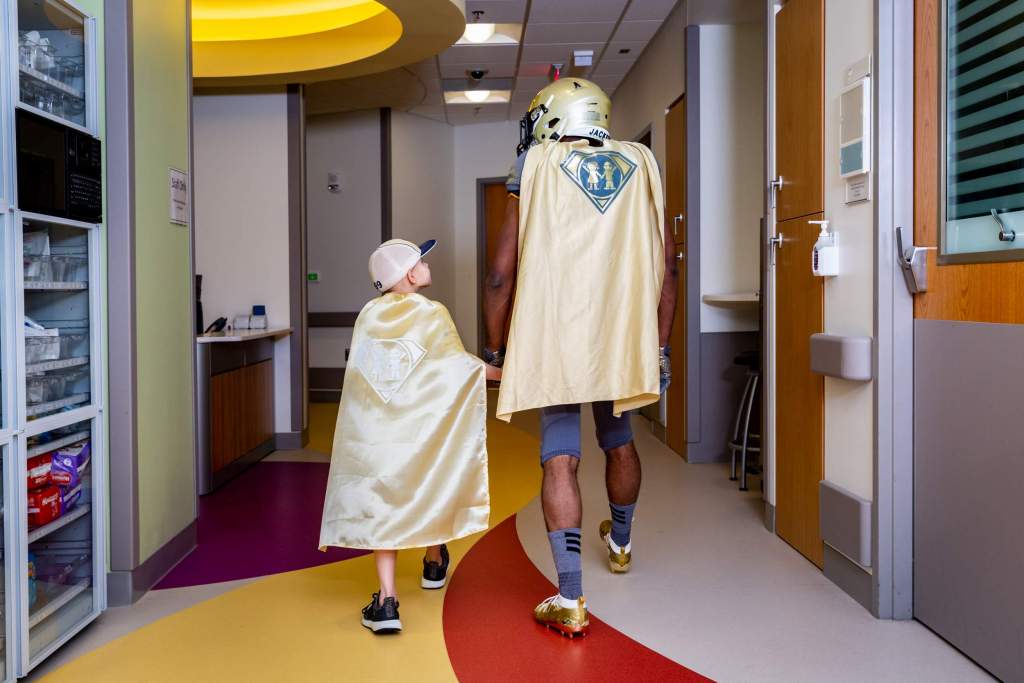 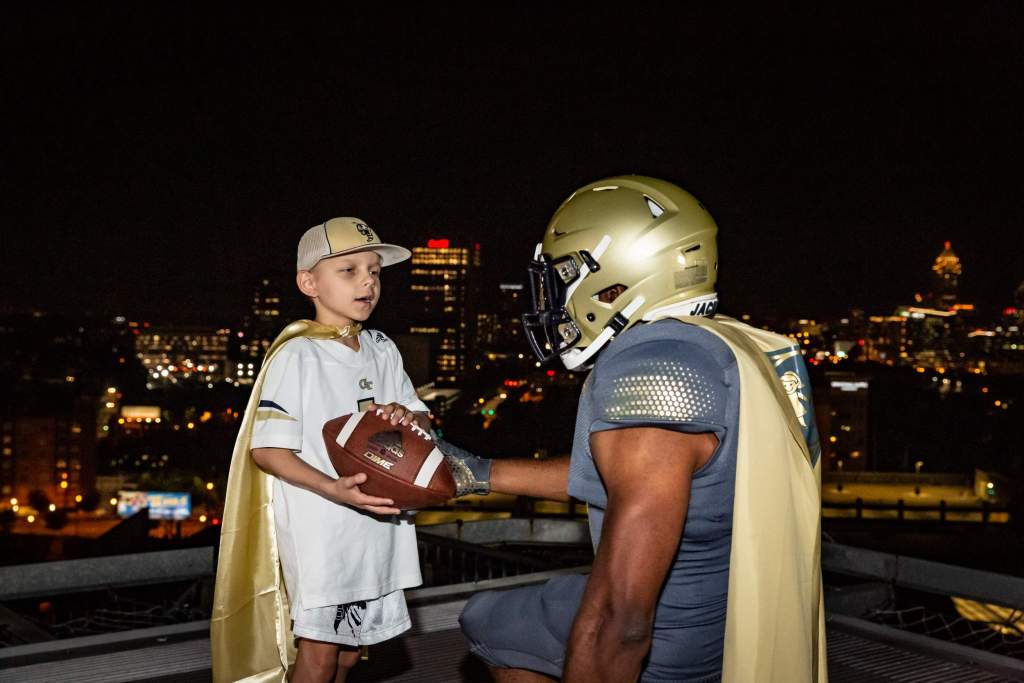 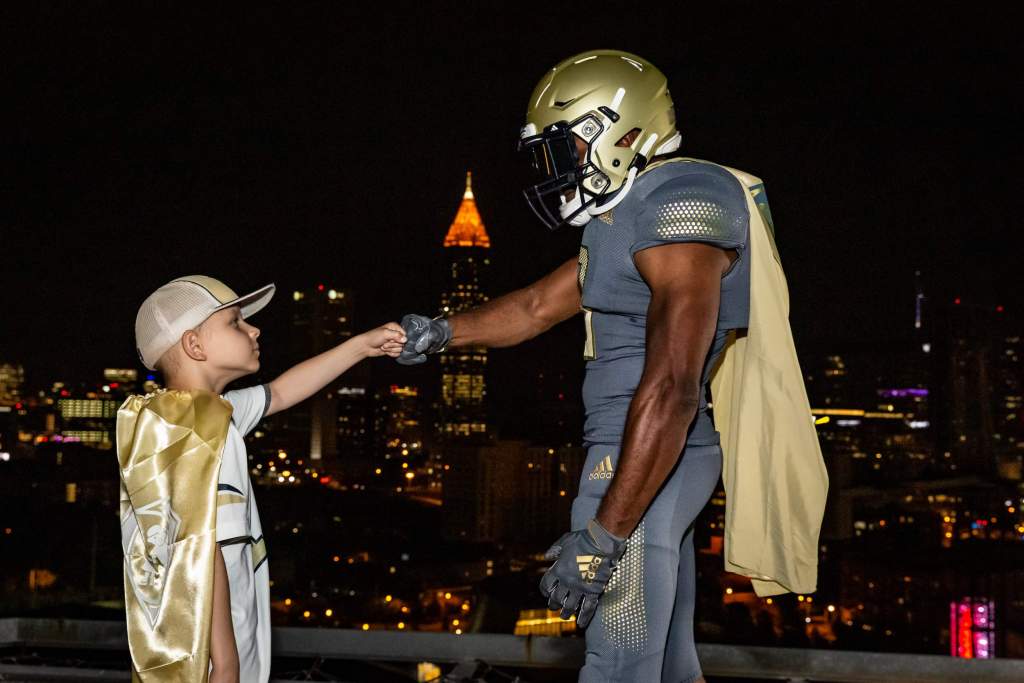 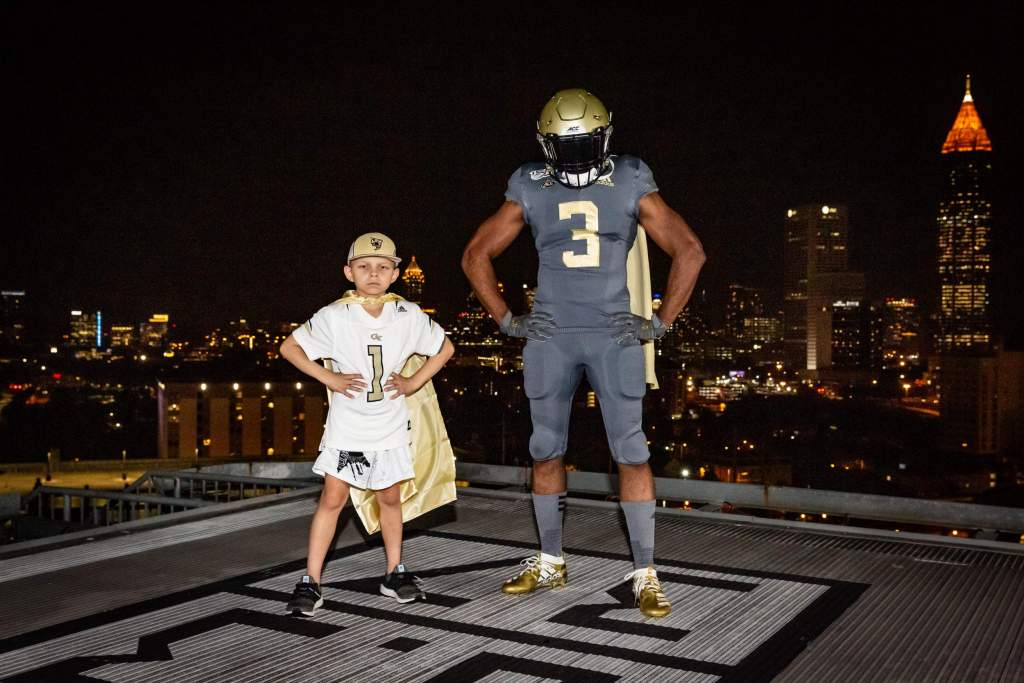 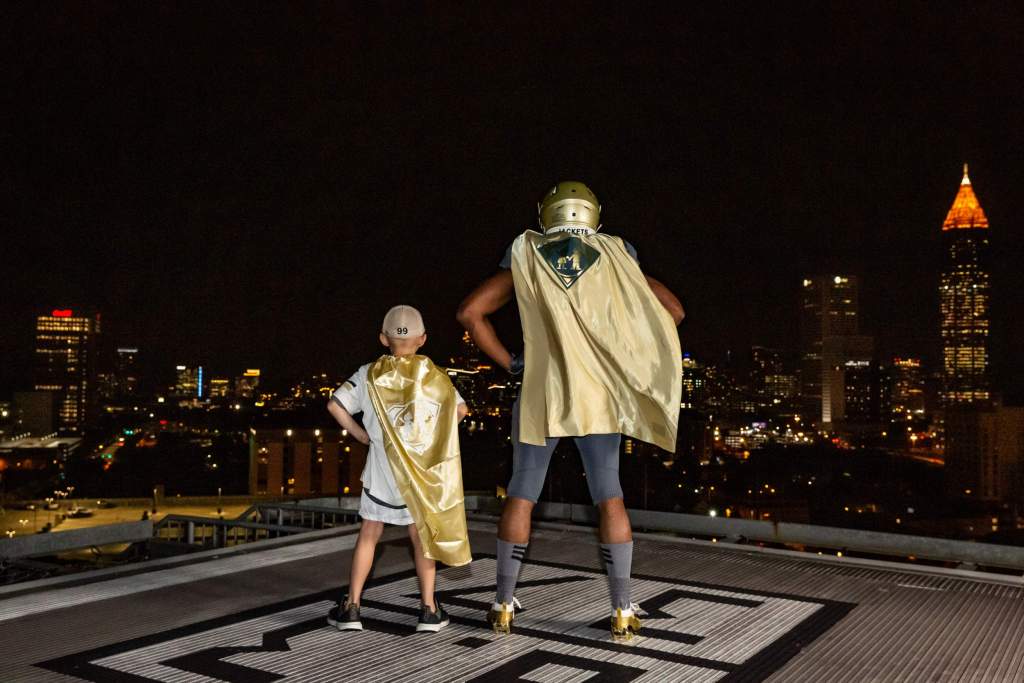 Onyx gray was chosen in part because of the color’s historical tie to legendary Georgia Tech football head coach John Heisman. Heisman was the first college football coach to enlist a practice squad to help the varsity team prepare for upcoming opponents, a unit which became known as the “Gray Devils.”

The Cape Day uniform will also include a new look for Georgia Tech’s iconic gold helmets as well as specialty shoes, with details coming in the weeks leading up to gameday.

Georgia Tech is one of just four teams to be featured as a part of the Selfless Pack of adidas’ Strategy Uniform series, which honors and highlights community engagement. Georgia Tech football student-athletes are a fixture at Children’s Healthcare of Atlanta, where they visit with superhero patients on a regular basis.

The date that the Yellow Jackets will wear the special alternate unis is also significant, as the Oct. 5 contest versus UNC comes just one day after Cape Day 2019, which is set for Friday, Oct. 4.

Season tickets (reserved seats for all seven of Georgia Tech’s 2019 home games – including the regular-season finale vs. archrival Georgia – beginning at $219), Stinger Mobile Passes (starting at just $149) and single-game tickets for the Oct. 5 Cape Day game versus North Carolina are on sale now. For more information and to purchase tickets online, visit ramblinwreck.com/footballtickets.

“It is a tremendous privilege to be a part of adidas’ 2019 Strategy Uniform series and to have the chance to honor the brave young men and women that battle every day at Children’s Healthcare of Atlanta. When adidas approached us with the opportunity to participate in the Strategy Uniform series, our football team was asked to select a community cause and Children’s Healthcare of Atlanta was at the top of their list. Being able to honor the annual Cape Day tradition was the perfect fit for the uniform theme.”

“We’re excited to join with Georgia Tech to put a fun new spin on this annual tradition, an event loved by our patients, families and the community. We have a great relationship with Georgia Tech to innovatively help kids through our joint Pediatric Technology Center, and we’re glad to take their excitement about helping kids onto the field.”

“It has been an honor and a privilege to work on this year’s Strategy Uniforms. We take pride in collaborating with our NCAA partners for this project was something special and something that hit home for us. Through the inspiration and design of these uniforms, we’re able to showcase the relationship and impact that each university has on their community. These uniforms truly highlight the positivity that a university, a team and the game of football can create both on and off the field.”

In addition to the unique design features of the adidas uniform, the Primeknit body-mapping design features a ribbed knit pattern on the chest and shoulder pads to produce a refined fit, while knit engineered mesh channels feature Climacool® technology to allow enhanced breathability and cooling zones. The inside of the jersey features silicon grip patterns on the shoulders to lock the pads in place. Primeknit finishes have been incorporated into the collar, sleeve cuff and hem for an unrivaled level of comfort and range of motion, allowing athletes to perform at their highest levels.

ABOUT CHILDREN’S HEALTHCARE OF ATLANTA

As the only freestanding pediatric healthcare system in Georgia, Children’s Healthcare of Atlanta is the trusted leader in caring for kids. The not-for-profit organization’s mission is to make kids better today and healthier tomorrow through more than 70 pediatric specialties and programs, top healthcare professionals, and leading research and technology. Children’s is one of the largest pediatric clinical care providers in the country, managing more than one million patient visits annually at three hospitals, Marcus Autism Center, the Center for Advanced Pediatrics and 26 neighborhood locations. Consistently ranked among the top children’s hospitals by U.S. News & World Report, Children’s Healthcare of Atlanta has impacted the lives of kids in Georgia, across the United States and around the world for more than 100 years thanks to generous support from the community. Visit www.choa.org for more information.

With 400-plus student-athletes across 17 varsity sports, Georgia Tech athletics competes at the highest level of intercollegiate athletics as a member of NCAA Division I and the Atlantic Coast Conference (ACC), while also developing young people who will change the world. Georgia Tech athletics has long been a leader in innovation in college athletics with the NCAA CHAMPS/Life Skills Program (known as the Total Person Program at GT), commitments to athletics scholarships until a student-athlete graduates and the use of virtual reality in recruiting among the many concepts that originated on The Flats. The Yellow Jackets have won five national championships during their illustrious history (four in football – 1917, 1928, 1952 and 1990; one in women’s tennis – 2007), appeared in two Final Fours in men’s basketball (1990 and 2004) and three College World Series in baseball (1994, 2002 and 2006). Combining world-class education with top-notch athletics, Georgia Tech athletics has produced 85 Academic All-Americans.

adidas is a global designer and developer of athletic and lifestyle footwear, apparel and accessories with the mission to be the best sports brand in the world. As an innovation and design leader, adidas engineers the best in high-performance products to make athletes better, faster and stronger and creates a range of classic and fresh lifestyle and high-fashion lines.