THE FLATS – For the first time in Georgia Tech’s golf history, two former Yellow Jackets – Richy Werenski and Seth Reeves – captured victories on the same weekend at the highest levels of professional golf … Three Jackets are in the field for the first 2020 major championship, the PGA Championship in San Francisco … Former Jackets begin competing in new international tour … More details below in this week’s Georgia Tech #ProJackets Report.

TWO CHAMPIONS IN ONE WEEKEND UNPRECEDENTED

There is a first time for everything. Two Georgia Tech alumni had never before won on the PGA Tour and the Korn Ferry Tour on the same weekend. Last weekend’s accomplishment for Richy Werenski and Seth Reeves seems unlikely in several ways, not the least of which was the ground that each had to make up in the final round on Sunday to win. Werenski began Sunday’s round at the Barracuda Championship in fifth place, seven points behind 54-hole leader Troy Merritt. He caught up with an eagle on the 16th hole and won it with a birdie on the 18th. Reeves was even further back, in a tie for 27th place after making the cut by one stroke, and fired a closing 64 to win by one stroke.

Their victories emphasize the strength of the Yellow Jackets’ golf teams during their careers (2010-14), in which they competed with Ollie Schniederjans and Anders Albertson, each of whom have won on the Korn Ferry Tour, leading Tech to three Atlantic Coast Conference championships and a berth in the NCAA Championship match play three times. Vincent Whaley, a rookie on the PGA Tour this year, was a freshman on the 2014 team and didn’t make the lineup for the NCAA Championship. 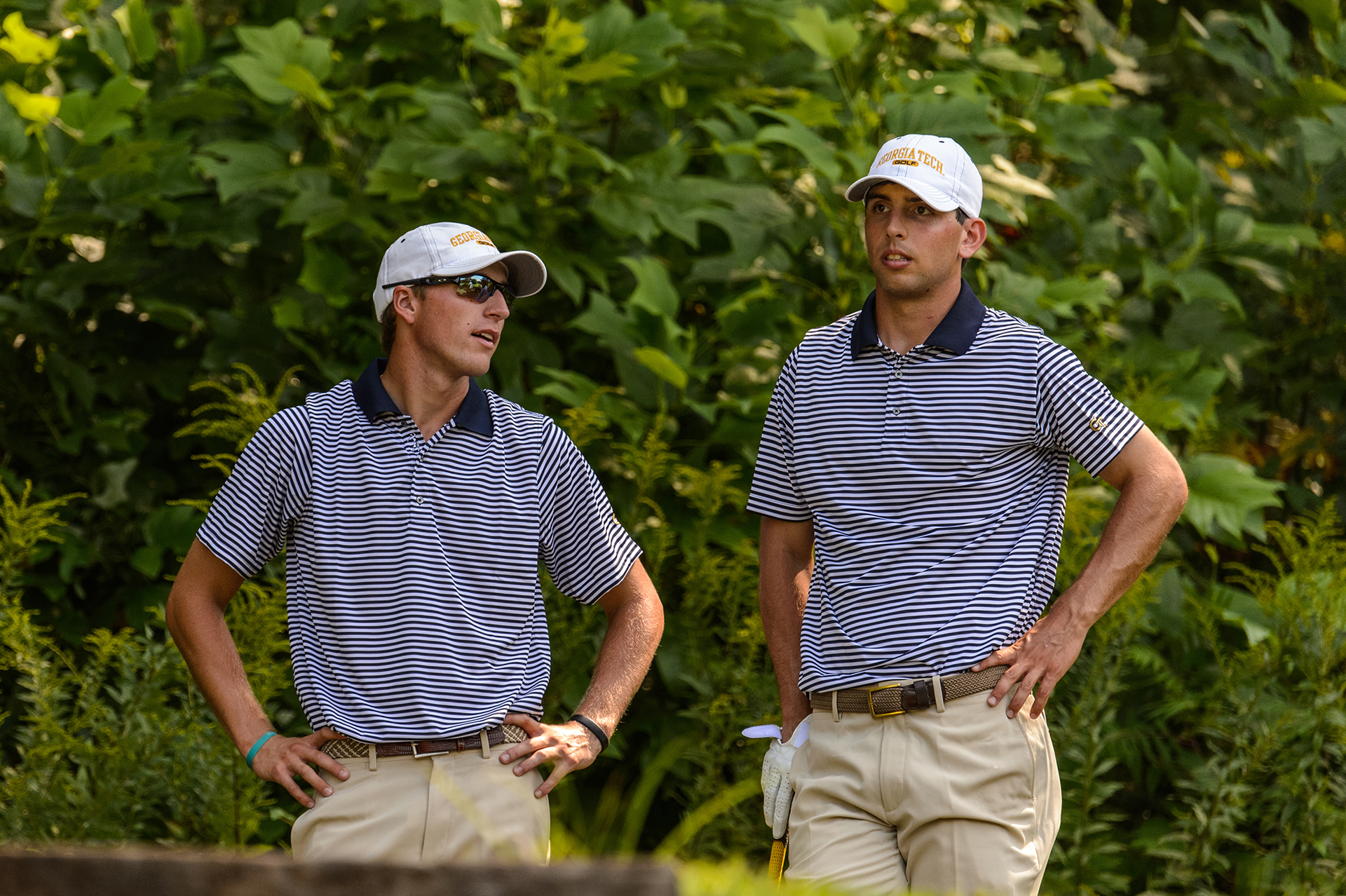 Richy Werenski’s victory at the Barracuda Championship last weekend enabled him to join Matt Kuchar and Cameron Tringale in the field for the first major championship of the season, the PGA Championship at TPC Harding Park in San Francisco, Calif.

Kuchar made the field on the strength of his top-15 finish in 2019 but also accrued the necessary PGA Championship points and qualified in other ways. Tringale’s performance in 2019-20 lifted him high enough to FedEx Cup points to place him the field for the sixth time, while Werenski earned his first berth in the event as a 2020 winner.

Kuchar has made the PGA Championship field every year since 2010 with one exception, finishing in the top 10 four times, including a tie for eighth last year at Bethpage Black on New York’s Long Island.

Richy Werenski’s victory at the Barracuda Championship not only solidified his position to make the FedEx Cup Playoffs but also to advance. Entering this weekend’s PGA Championship, Werenski stands at No. 34 (up from No. 72) with only one regular-season event remains on the PGA Tour schedule, the Wyndham Championship Aug. 13-16 in Greensboro, N.C. The top 125 players in FedEx Cup points following the Wyndham advance to the Northern Trust on Aug. 20-23 in Boston, and the top 70 move on to the BMW Championship Aug. 27-30 in Chicago. The top 30 following the BMW come to Atlanta for the Tour Championship.

The win gave Werenski full PGA Tour status through the 2020-21 season and entry not only into the upcoming PGA Championship, but also the U.S. Open in September, the Sentry Tournament of Champions in January and The Players Championship next spring.

Meanwhile, Matt Kuchar played a solid four rounds to tie for 25th place at the FedEx St. Jude Invitational, the World Golf Championships series event last weekend at TPC Southwind in Memphis. Kuchar posted opening and closing rounds of 66 for a 72-hole total of 275 (-5). He currently sits No. 59 on the FedEx Cup list.

Seth Reeves’ come-from behind win boosted him from 135th to 18th on the Korn Ferry Tour points list, and earned him entry into the remaining nine events on the 2020-21 revamped schedule, as well as 2022. The Tech All-American, whose best finish in 2020 was a tie for 24th, had missed the cut in all six Korn Ferry events since the return to golf after the coronavirus outbreak, and he had barely made the cut following rounds of 74-67. But the lefthander shot 68-64 on the weekend and was still a stroke behind when he finished his round two hours ahead of the leaders.

Beginning the weekend, it was Nicholas Thompson who contended after opening with rounds of 66-70, but the 2005 graduate fell back with a Saturday 79 and finished in a tie for 58th. J.T. Griffin missed the cut, and Anders Albertson had to withdraw following a first-round 67 due to a positive Covid-19 test. Albertson later learned the test was a false positive and will return to action this week.

The Korn Ferry Tour moves to the West Coast this week for the WinCo Foods Portland Open at Pumpkin Ridge Golf Club in North Plains, Ore., where Albertson (No. 104 in Korn Ferry points), Paul Haley II (No. 25), J.T. Griffin (No. 39), Ollie Schniederjans (No. 35) and Nicholas Thompson (No. 132) will be back in action. Griffin missed the cut last weekend, while Haley and Schniederjans took the week off.

The PGA Tour Champions resumed competition last weekend at the Ally Championship in Warwick Hills, Mich., and Larry Mize turned in a tie for 52nd place with a 1-under-par total of 215. He sits No. 43 in the Charles Schwab Cup points list. The senior tour takes this week off before returning to action next week at Firestone Country Club for the Bridgestone Senior Players Championship.

James Clark, Chris Petefish and other Yellow Jacket pros will be competing this week at the Golf Club of Georgia in Alpharetta in the first of an eight-event, U.S.-based tournament series designed for members of the PGA Tours in Canada, Latino America and China. Clark has competed in various developmental tour events around the Southeastern U.S., while Petefish has status on the MacKenzie Tour (PGA Tour Canada).

The first event will be played this Tuesday through Friday at Golf Club of Georgia, with events to follow next week at Echelon Golf Club in Alpharetta, Aug. 25-28 at Callaway Gardens in Pine Mountain, Aug. 31-Sept. 3 in Auburn, Ala., Sept. 22-25 in Jacksonville, Fla., Sept. 29-Oct. 2 in Lady Lake, Fla., and Oct. 6-9 in Fort Lauderdale, Fla. A season finale event will be held Oct. 26-30 at a site to be announced.

DUVAL SIGNS ON WITH ESPN FOR PGA CHAMPIONSHIP

David Duval, the former World No. 1, will serve as ESPN’s lead analyst in the 18th-hole tower for the network’s coverage of the PGA Championship next week alongside Scott Van Pelt. Duval previously worked for ESPN as an analyst for a couple of years before joining Golf Channel in early 2015. He made his debut as a TV analyst on ESPN’s coverage of the U.S. Open in 2012 and became a mainstay of the network’s U.S. Open coverage and at The Open Championship through 2014. Duval will work double duty, contributing to primetime coverage of Golf Central Live From the PGA Championship.  READ MORE

“I asked my caddie, headed to the first tee, ‘What’s the lead?'”

After six straight missed cuts in the Return to Golf, he entered Sunday @PinnBankGolf T27.

Eight off the lead.

Playing 140 minutes ahead of the final pairing, @Seth_Reeves carded 7-under 64 on Sunday @PinnBankGolf.

54-hole leader @RRuffels bogeyed two of the final three holes, falling into a five-way tie at 10-under, one short of Reeves.

After @Seth_Reeves posted 11-under @PinnBankGolf, five players had a chance to match with a birdie at the last.

Mixtape dropping soon 🔥 Found this gem in the attic today. Circa 1999