GT Golf: Are You Next?

Bruce Heppler has guided the Yellow Jackets to an NCAA regional every year since 1998, while 17 of those teams advanced to the NCAA Finals, and 11 finished in the top eight, including three runner-up showings. During his tenure, Tech has won or shared 13 Atlantic Coast Conference titles. Only two ACC coaches have led their teams to more ACC titles than has Heppler. The Yellow Jackets have captured or shared 59 team titles overall.

He was named ACC Coach of the Year in 2019 for the 10th time, more than any ACC coach in conference history.

Since 2000, Tech has finished outside the top 10 in both polls only three times. 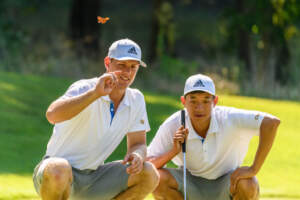 A former standout pitcher for Georgia Tech’s baseball team who has spent time as a strength and conditioning coach and a professional caddie the last several years, Devin Stanton joined joined the Georgia Tech golf staff in July of 2019.

Stanton began his new role after spending the past year as a strength and conditioning intern with Georgia Tech athletics, helping coach the baseball team, golf team and track and field athletes in the weight room, and also training the men’s and women’s cheerleading teams. In the golf program, he will be responsible for recruiting, fitness development during competitions, assisting with practice design and set up, supervising technology at Tech’s Noonan Practice Facility, and assisting with all other daily compliance and reporting responsibilities.

In his 20th year as an assistant player development coach at Georgia Tech, Steve Tamborra oversees the highly-touted strength and conditioning program for the Georgia Tech baseball team.

Since his arrival more than a decade ago, Tamborra has been responsible for the development and implementation of strength training regimes of many student-athletes that have gone on to play professional baseball, with several of those athletes returning to Georgia Tech during their offseason to continue training with him. 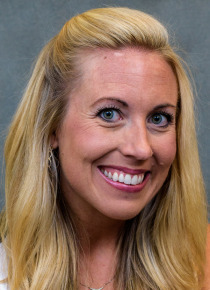 Tobin originally joined the GTAA staff in December 2014 as the assistant to the senior associate athletic director for the Alexander-Tharpe Fund. In May 2015, she was named the executive assistant for Georgia Tech’s director of athletics. In February, 2019, she joined Georgia Tech’s golf staff as director of operations, supporting the team in the areas of fundraising, travel coordination and administrative support while continuing to manage events and projects for Tech athletics.

2002 National Champion and PGA Tour Professional, Troy Matteson, details the Noonan Golf Facility’s elite features. The Noonan Golf Facility is a 13-acre complex on the edge of the Tech campus in midtown Atlanta where the Yellow Jackets can practice and work on every part of their games on a daily basis. There are seven greens, shaped bunkers and approaches, all built with golf architect Tom Fazio’s firm at the helm and former players like Matt Kuchar, Roberto Castro, Kris Mikkelsen and Carlton Forrester and others advising. The East end of the property, named for alumnus David Dorman, is designed for work on every short-game situation imaginable. Routing has been designed into the entire property for a par-3 competition course, named for alumni Linda and Ray Helton.

2002 National Champion and PGA Tour Professional, Troy Matteson, explains how Georgia Tech Golf’s local club memberships elevated him to the highest level. For nearly 30 years, The Golf Club of Georgia has established a reputation as one of the finest private golf clubs in North Atlanta. This secluded, yet desirable enclave for the true golf enthusiast features 36 holes of award-winning golf and provides the ultimate test for players.

PGA Tour Professional and Olympic Medalist, Matt Kuchar, shares what playing at East Lake meant to him while in college at Georgia Tech. Located in Atlanta, Georgia, East Lake Golf Club is the home course of legendary golfer Bobby Jones and is the oldest golf course in the city of Atlanta. The Club is not only historic, but philanthropic as well. Proceeds from operations – more than $20 million to date – support the East Lake Foundation, which has helped transform one of the nation’s worst public housing projects into a thriving community. Since 2005, East Lake has been the permanent home of the TOUR Championship, the culminating event of the PGA TOUR Playoffs for the FedEx Cup, with only the top 30 players on the points list qualifying each year.

Noah Norton explains why he left his hometown of Chico, Calif. to come to Georgia Tech