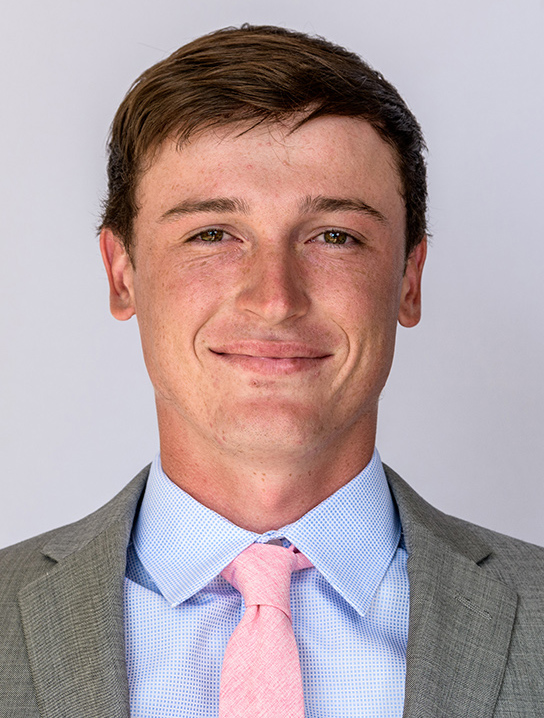 General: Won three individual titles in his career and remained at or near the top of Tech’s lineup … Recorded 11 top-10 finishes and a 71.37 stroke average over 114 career rounds, third lowest in Tech history behind Bryce Molder and his brother Ollie … No. 92 in the World Amateur Golf Ranking and No. 97 in the Scratch Players Amateur Ranking … Listed No. 23 in the inaugural PGA Tour University rankings on July 21 … Came to Georgia Tech ranked No. 51 nationally in the class of 2016 by the Junior Golf Scoreboard when he signed with the Yellow Jackets in the spring of 2016 … Followed older brother and three-time All-American Ollie Schniederjans into the Tech program … Has made the All-Atlantic Coast Conference team all three years at Georgia Tech … Very good driver of the ball … Putted as well as anyone on the team … Creative around the greens and a very good wedge player.

Last name pronounced “shny-der-JANNZ” … Older brother Ollie was a first-team All-American and Atlantic Coast Conference Player of the Year in 2014 and 2015, and is currently a PGA Tour pro … Older brother Ben was a pitcher on the Yellow Jackets’ baseball team … Began playing golf full-time around age 12 … Enjoys all sports, golf history and movies … Graduated from Tech in May, 2020 with a bachelor’s degree in business administration.

2020 Amateur Highlights:  Won the Georgia Amateur Championship (213, E) on the first hole of a sudden-death playoff … Became the 10th Georgia Tech golfer to win the state amateur title and the first since 1964 (Bunky Henry) … Tried to Monday qualify for several Korn Ferry Tour events, made it into the field for the Safeway Open in September … Turned pro in October and tied for first place in his first event (lost a playoff for first prize), the GPro Tour Mimosa Open.

Tied for sixth place at the Puerto Rico Classic (209, -7) for his top finish in three spring events  … Ranked No. 105 in Golfstat and No. 62 in the Golfweek/Sagarin Index … Was Tech’s top-rated player after the fall season (No. 5 in the Golfweek/Sagarin Index, and No. 26 in Golfstat)… Played in all four events and won the Carpet Capital Collegiate by seven strokes (207, -9), his second career victory in the event … Tied for 24th in Tech’s other two stroke-play events, the Olympia Fields/Fighting Illini Invitational and the Golf Club of Georgia Collegiate Invitational … Won two matches to help win the Cypress Point Classic, teaming with Tyler Strafaci to defeat California in fourball and defeating Duke’s Chandler Eaton in singles … Led Tech with a 71.22 stroke average.

All-ACC and GCAA All-Region selection for the third time in his career … Semifinalist for the Jack Nicklaus Award … Played No. 1 on the Tech lineup all spring and was the Yellow Jackets’ second highest-ranked player in the Golfweek/Sagarin Index (22) and in Golfstat (30) … Led the team in stroke average with a career-best 70.27 and in head-to-head winning percentage (78.8), having posted five top-10 finishes … Scored three top-10 finishes in the fall – tied for fourth at the Carpet Capital Collegiate (208, -6), sixth at the Maui Jim Intercollegiate (203, -7) and second at the Golf Club of Georgia Collegiate (206, -10) … Finishes in the spring ranged from T15 to T51 until he tied for third at the Clemson Invitational (202, -14), holding the 36-hole lead after a second-round 62 … Finished sixth in the ACC Championship (208, -8), tied for 17th at the NCAA Pullman Regional (204, -6).

2017-18:  Had a solid sophomore season with six top-20 finishes in 11 events and a 71.67 stroke average, third on the team … Made the All-ACC team and the GCAA All-East Region team for the second straight year … Four of those top-20s came in the fall season, with best finish of T-7 at the Franklin American Mortgage Collegiate … Best showing of the spring was a tie for 12th at the ACC Championship, where he shot a career-best 65 (-7) in the opening round … Tied for 18th at the Valspar Collegiate Invitational … Ranked No. 71 nationally by Golfstat and No. 90 in the Golfweek/Sagarin Ratings … Tied for ninth in the Patriot All-American over the holiday break between semesters.

2016-17:  Made the All-ACC team and the GCAA All-East Region team on the strength of two tournament victories … Made a splash from the start, winning the Carpet Capital Collegiate (competing as an individual) in his very first collegiate event in the fall (205, -11) … Added a second victory at the Puerto Rico Classic in the spring (206, -10) … Earned his third top-5 finish with a T-3 at the Seminole Intercollegiate (205, -11) … Tech’s top finisher at the NCAA Stanford Regional (T-12) … Finished with Tech’s best stroke average at 71.87 in 30 rounds, and is ranked No. 89 nationally in the Golfweek/Sagarin Index (122 in Golfstat) … Teamed with Tyler Strafaci to win both of their foursomes matches at the Cypress point Classic match play event in the fall.

High School/Junior Golf: All-state performer in Georgia in 2014 and 2015 at Harrison High School for coach Dennis Attaway … Helped the Hoyas to three class AAAAAA regional titles from 2013 to 2015 and won medalist honors in 2015 … Graduated from Harrison before his senior season … On the junior circuit, Schniederjans was ranked No. 110 nationally among all classes, No. 6 in Georgia in his class, having earned four victories in junior events and 18 top-10 finishes overall in the last three years … In 2016, won the Amelia Island Junior Open in the Hurricane Junior Golf Tour, tied for seventh at the Florida Azalea Amateur and tied for 19th at the Puerto Rico Junior Open, an American Junior Golf Association event.