Pinehurst, N.C. – Georgia Tech senior golfer Tyler Strafaci captured the biggest amateur title of his career Saturday, winning the 120th North & South Amateur Championship with a 3&1 victory over William Holcomb V, a senior at Sam Houston State, in the championship match. Strafaci had reached the final with a 2&1 win over Jonathan Yaun of Liberty University in the semifinals.

With the victory, the Davie, Fla., senior won a title his grandfather, Frank, won in 1938 and 1939, and his father, Frank, Jr., competed for many years even into the 2000s. Frank, Jr., caddied for his son this week. Tyler and Frank, Sr., became the first grandfather and grandson to win the North & South. Strafaci also became the first Georgia Tech golfer to win the prestigious event, which has been played every year since 1901 (Tech junior Noah Norton lost in the finals in 2019).

Saturday afternoon, Strafaci won six holes with birdies on the famed Pinehurst No. 2 course, the last three on 13, 14 and 17 to rally from a 1-down deficit and put away the match and the title. The birdie at 17 came after he placed his tee shot within four feet of the hole.

ALL IN THE FAMILY

Tyler Strafaci is the 2020 North & South Amateur Champion! His name will go up on the wall with his grandfather Frank Strafaci who won this event in 1938 and 1939! pic.twitter.com/8VnCCewPjy

Here’s the clinching shot by @tystrafaci at the par-3 17th hole in the championship match at the North & South Amateur (courtesy @noahnorton36). #gojackets🐝 pic.twitter.com/hiGAxWBRbL

“I first came to Pinehurst when I was a little kid, and mom and dad and would always tell me what my grandfather thought of Pinehurst,” Strafaci said, clutching the coveted Putter Boy trophy on the 18th green. “The first thing we would do, my dad would walk me into the locker room and we’d find Grandpa’s locker. We’d sit in there and look at all of the names.

“I never thought that this day would ever come.” 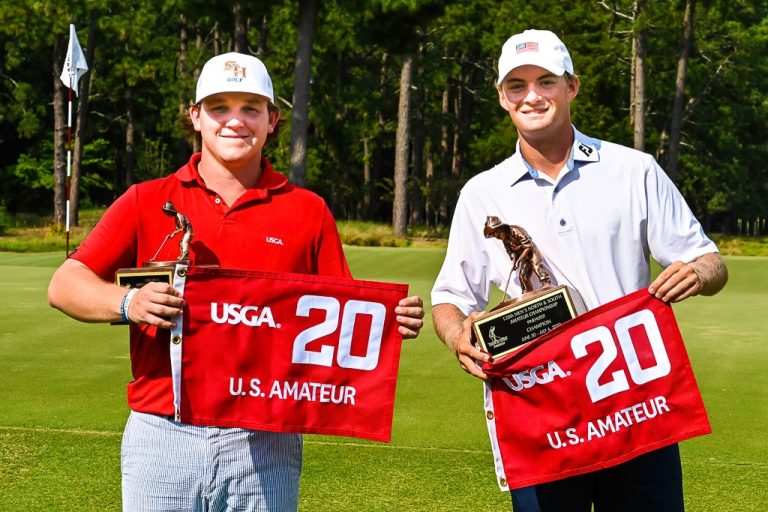 Holcomb (left) and Strafaci each receive exemptions into the 2020 U.S. Amateur Championship at Bandon Dunes, Ore. (all photos courtesy of Pinehurst Resort)

The victory builds on a strong senior year finish for Strafaci, who was a finalist for the Byron Nelson Award and was named a PING honorable mention All-American selection this spring by the Golf Coaches Association of America, finishing the spring ranked No. 52 in both Golfstat and the Golfweek/Sagarin Index. He posted three top-10 finishes this year, two of those in the top-5, and led the Yellow Jackets in subpar rounds (10) while posting the team’s third-best stroke average (71.94) and second-best head-to-head winning percentage (.746).

He has made the All-Atlantic Coast Conference team twice in his career (no team has been chosen this spring) and has earned PING All-East Region honors by the GCAA three times. He made the ACC All-Academic golf team in 2018 and 2019 (no team selected in 2020) and was named an All-America Scholar in 2019 by the GCAA.

He helped Tech win a nation-best four tournaments in 2019-20 as the Yellow Jackets to victory in the Puerto Rico Classic in February before the season prematurely ended due to the coronavirus outbreak, and also three wins in four events in the fall – a 20-stroke victory at the Carpet Capital Collegiate, a share of the title at the Olympia Fields/Fighting Illini Invitational with No. 9 Baylor, and the championship of the Cypress Point Classic match play event. 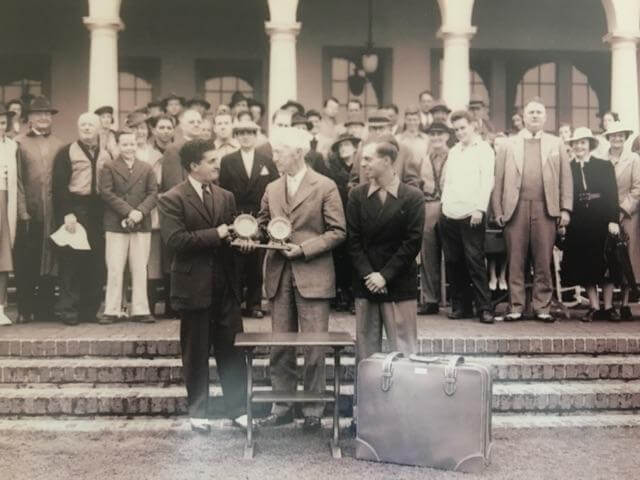 Frank Strafaci, left, after winning the 1938 North & South Amateur, is awarded as the trophy presentation by Kennesaw Mountain Landis. (all photos courtesy of Pinehurst Resort)