Baseball “purists” are dead set against the designated hitter.

They might soften their stance, however, if they watched Michael Guldberg. The sophomore from Marietta (Walton High School) is a purist’s hitting dream.

He hit a three-run homer in his first collegiate at-bat and was batting .368 (.400 in 16 ACC games) with a .579 slugging percentage and a .510 on-base average in 28 games, including 10 starts before a shoulder injury cut short his freshman season.

After three seasons (summer, fall and winter) of hard work rehabbing and getting his swing right, he has picked up where he left off and has wielded a sizzling bat in the season that most matters — baseball season. 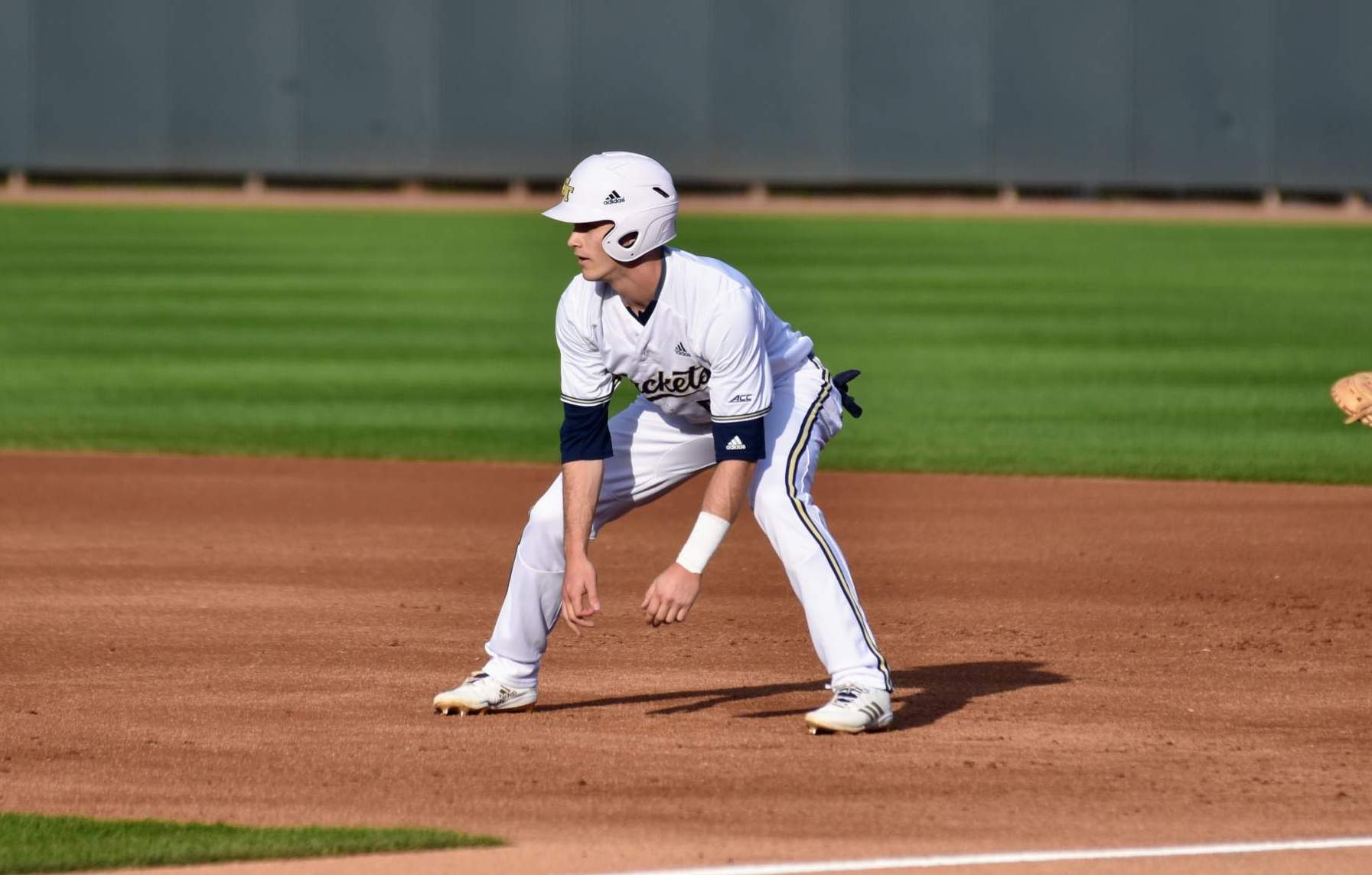 Heading into this weekend’s series at No. 4 Louisville, Guldberg is leading the ACC in batting average at .515 — 112 points higher than second-place Sal Frelick of Boston College — and hits, with 35, and ranks third in on-base percentage at .547, 3/100ths of a point behind teammate Kyle McCann.

As he gets stronger, his bat gets hotter. Guldberg has been scorching over the past 10 games, hitting .561 (23-for-41), with a .581 on-base percentage. He’s riding a multi-hit streak of six straight games — he has eight in nine games and a team-high 11 for the season — and, last weekend against Virginia, tormented Cavaliers pitching, batting .692 (9-for-13), with a walk and five runs scored.

He followed that up Tuesday night with a 3-for-6, three-run game in the midweek win at Mercer.

“He’s on fire,” said head coach Danny Hall, who first saw Guldberg as a teammate of his youngest son, Colin, with the East Cobb Yankees. “He’s doing a tremendous job DH’ing, getting on base. The success that he’s having, No. 1, he’s smart. I don’t think he’s made a B here yet. He’s 4.0 in three semesters and probably will make another 4.0 this semester. He’s very heady and he’s a good player, but he works to get where he is.”

Guldberg has made himself a DH. He’s actually an infielder by trade, a pursuit he hopes to resume shortly. But until he’s improved his arm strength enough to play the field, he’s dedicated to hitting, attacking each plate appearance with the vigor and attention to detail that would be expected of a 4.0 industrial engineering student from a family that is all Georgia Tech — his father, Bob, is a professor of biomedical engineering at Georgia Tech, his mother, Tina, is an engineer at the Institute, and his older sister, Sophia, is a student at Tech.

To Michael, DH’ing is not a job. It’s an opportunity to hit three or four times a game, something he appreciates even more after last year.

“Every day I’m coming out here like it’s a new day,” he said. “Being able to swing the bat is a lot better than last year.”

He not only appreciates getting to DH and being pain-free doing so, he’s unafraid to talk about the success he’s having — as big a taboo to American League fans and DH supporters as well as National League fans.

“I try not to be superstitious. I try to keep it just with me,” he said, with a laugh. 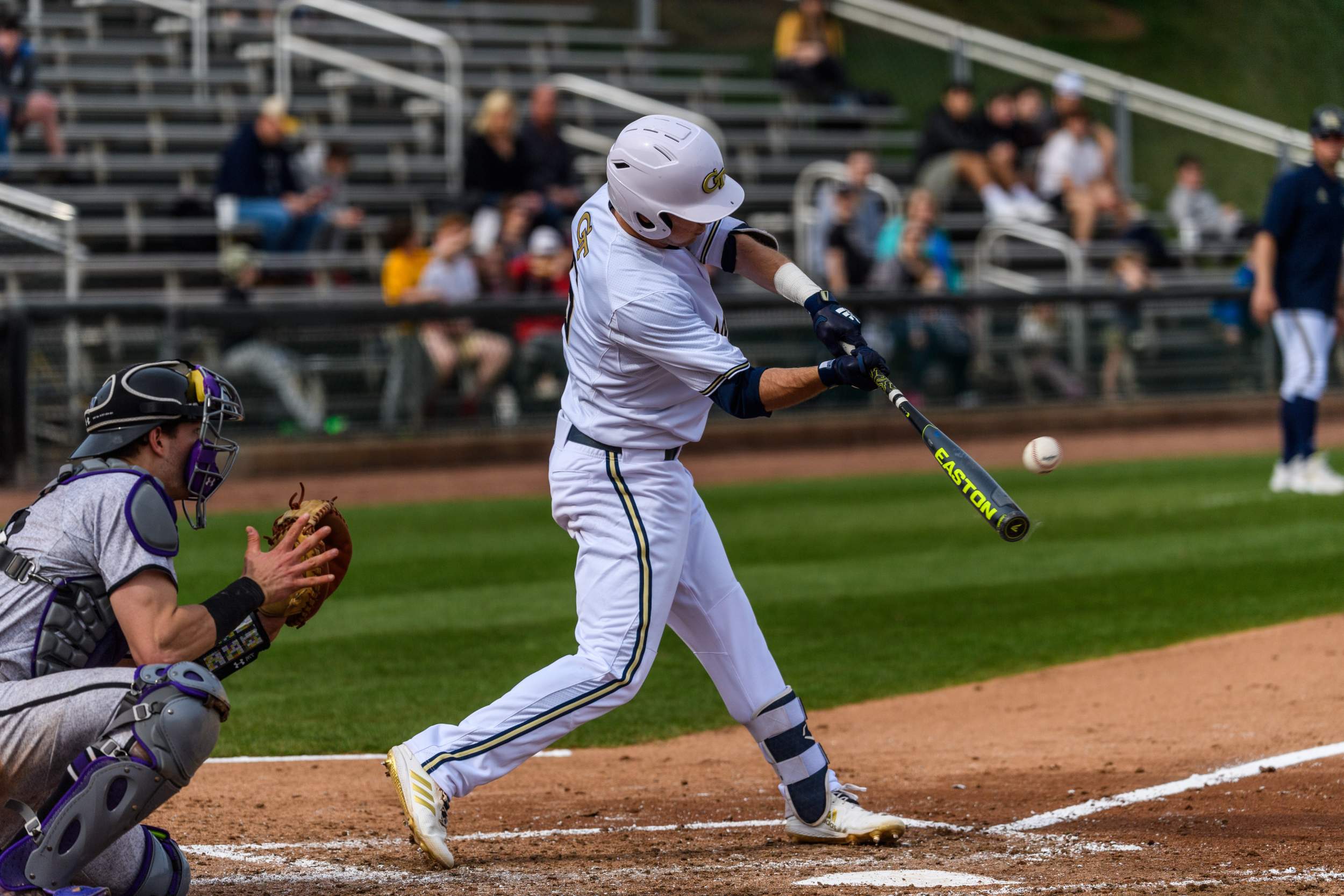 His success is simply a matter of sticking to basics and putting the ball in play — Guldberg was the penultimate batter in the country to strikeout, going 48 plate appearances before doing so, March 9, at Miami.

Guldberg, who calls Detroit DH/1B Miguel Cabrera his baseball idol growing up, admitted that the K was something he took personally. So personally that he started his current tear.

“I probably did.” he said, with a laugh. “That’s one of my big things. I really like to put the ball in play because, as I’ve seen, good things happen when you put a bat on the ball. Strikeouts are frustrating for me, so I like to bounce back from that.

“Every at-bat I go up there just trying to do my job, put a barrel on the ball and good things happen,” he added. ”It’s not always getting a hit. A lot of times it is. I’m trying to read the situation and do my job.”

He read every situation and did his job to perfection on Sunday afternoon in the series-winning 6-5 win over UVA, involving himself in three of the Jackets’ four scoring rallies. In the first inning he worked the hit-and-run with leadoff hitter Luke Waddell, serving a 1-1 pitch into right field, putting runners on the corners. McCann would score Waddell with a double (he also would score on a Tristin English sac fly). In the fifth, with Waddell at second, Guldberg floated a single to left. Waddell would score on the play on an error by the left fielder. Finally, in the seventh, with Waddell on second and none out, he dropped a sacrifice bunt down the third base line that moved Waddell to third where he’d score what proved to be the deciding run on a McCann single. The sacrifice was Guldberg’s fourth, tying him for second in the conference.

His production has become commonplace since Hall moved Guldberg into the second spot in the order on Feb. 26 for the game against Georgia State. Michael celebrated the move by going 3-for-4 with a pair of runs scored and a stolen base. In the 13 games he’s batted in the two-hole, Guldberg has hit .569 (29-for-51) with 10 multi-hit games. He’d been 1-for-8 in the three games preceding GSU, batting toward the bottom of the order.

The move to the top of the order also has benefited Waddell, who has hit .364 (12-for-33) with seven runs in the eight games they’ve batted 1-2, with four multi-hit games in his past six — including a four-hit game at Mercer. Those were Waddell’s first multi-hit games of the season.

The table-setting has been fun, especially feeding the voracious appetites of 3-4 hitters McCann and English.

“It’s awesome,” Guldberg said. “Obviously, (opponents) don’t want to put me on for either of the guys behind me. It seems like every time I come to the plate right now Luke’s on base, which is, obviously, great. It’s a great spot.”

Guldberg, who made ACC Academic Honor Roll last year, doesn’t follow his numbers but he DOES have a feel for when things are going well. It fuels him in his daily pursuit to refine his craft.

We do mean daily.

More than the coaching staff would like, as he found out last week.

“If there was ever a guy that swings too much, it might be him,” said Hall. “He’s the first guy up in the batting cages every day, it doesn’t matter if it’s practice, if we have a game. We have a machine up there that has an automatic feeder on it. He’s hitting off that constantly, he’s hitting with our coaches constantly. Perfectionist would be the right word for him.”

Hall admires the “practice makes perfect” approach, but last week finally had to draw a line in the sand on just how much practice Guldberg could do to reach his desired level of perfection — putting a swing count on him.

“On Saturday he kind of tweaked something in BP and so (assistant coach/hitting James) Ramsey was like, ‘Okay, cages are off limits. You have to cut down.’ But I’d rather have it where you just have to say, ‘Okay, enough’s enough. You’re good. Let’s back down a little bit,’ than the other way.”

As Guldberg cuts down on swings he hopes to ramp up his throwing and get back into the field.

“Hopefully soon the shoulder starts feeling good enough to throw on a daily basis,” he said. “I think it’s close.”

He’s headed in the right direction and feels the team is as well, having won three of four. He’d like to see the Jackets stay hot and change their history with the Cardinals. They’ve lost six straight and scored only five runs during the last visit to Jim Patterson Stadium in 2015.