Palm Desert, Calif. – Veterans Noah Norton and Connor Howe each fired 4-under-par 68s on Friday, pacing Georgia Tech to a 12-under-par round of 276 and second place after the opening round of the Wyoming Desert Intercollegiate. The Yellow Jackets got four subpar scores toward its strong finish to the opening round.

TECH LINEUP – Tech, the 39th-ranked team in the nation according to Golfstat, made a strong push in the final holes of the round, getting four birdies on the par-15 15th hole, and a pair of birdies and an eagle at the 18th with only two bogeys in that stretch.

Norton, a senior from Chico, Calif., had the eagle at the last, finishing off his second-best round of the spring with no bogeys after the opening hole. Howe, a junior from Ogden, Utah, who shot an opening 67 in Tech’s last tournament, birdied three of his first five holes Friday and two of his last five. Both players are tied for third place individually.

Sophomore Andy Mao (Johns Creek, Ga.) and freshman Christo Lamprecht (George, South Africa) each shot 2-under-par 70 for the Yellow Jackets and are tied for 20th place individually. That was Mao’s best score in 13 collegiate rounds to date, posted on the strength of five birdies over 11 holes in the middle of his round. Lamprecht also recorded five birdies in his round as the Jackets led the field with 22 and went 11-under-par on the par-5 holes.

Sophomore Luka Karaulic (Dacula, Ga.) struggled early and had a pair of double bogeys at 10 and 11, but played the last seven holes 2-under-par for a 77 which did not count toward the team score. Freshman Adam Bratton (Newburgh, Ind.) carded a 1-over-par 73 in his collegiate debut and is tied for 43rd place. 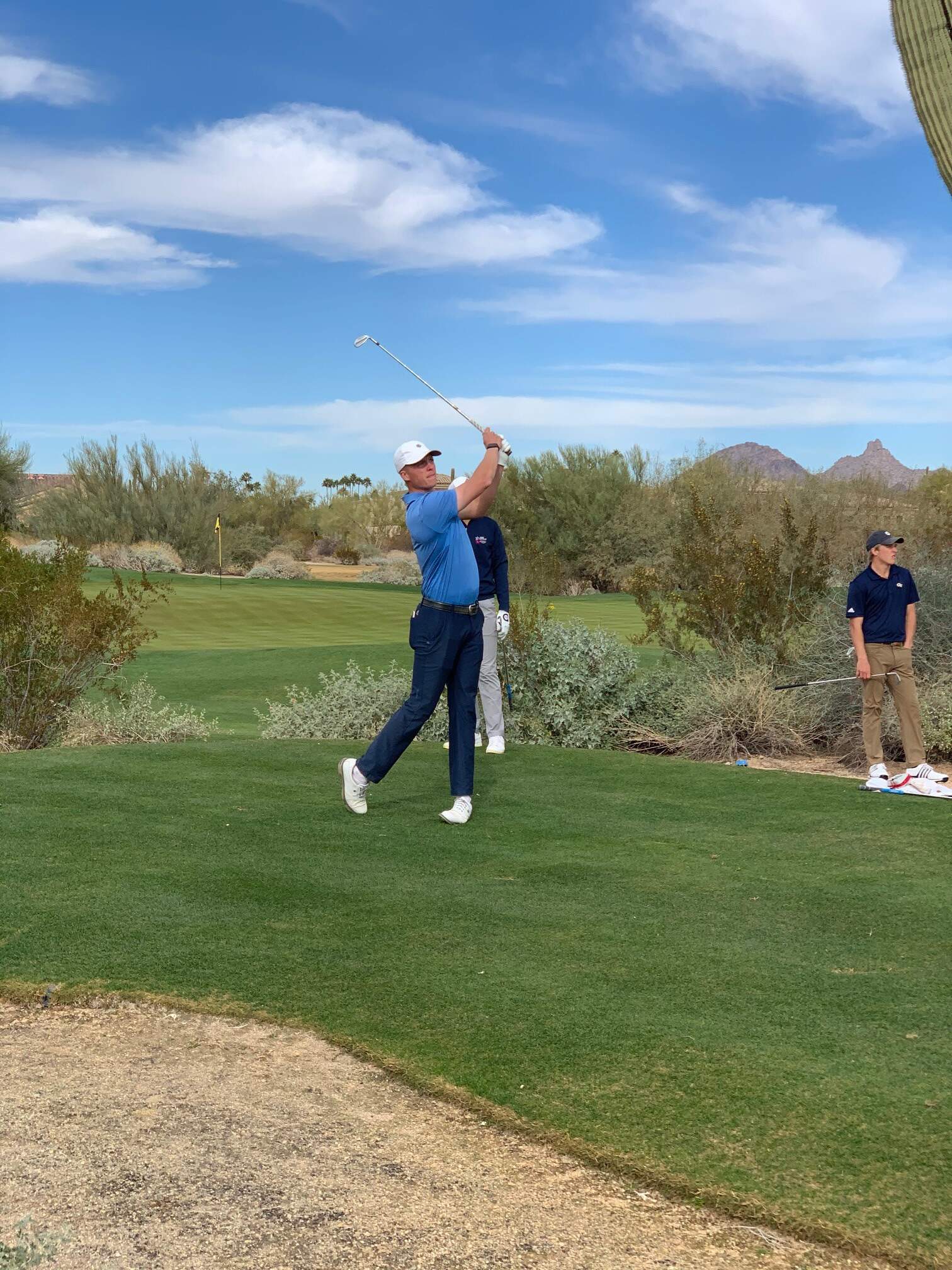 Connor Howe opened the tournament with a 68 Friday.

TEAM LEADERBOARD – No. 28 Kansas received three rounds under 70, including the individual leader with a 65, in putting together a 14-under-par round of 274 to take a two-stroke lead over the Yellow Jackets after round 1. Charlotte also posted four subpar rounds for an 11-under-par total of 277 and stands third, followed by Oregon, whose best score Friday was a 67, at 10-under-par 278.

There’s a seven-shot gap between the Ducks and fifth-place UCLA (3-under-par 285), while Colorado State and Fresno State, the only other teams in the 21-team field to finish under par, are tied for sixth place at 1-under 287.

INDIVIDUAL LEADERBOARD – The Jayhawks’ Luke Kluver played a bogey-free round of 65 (-7) Friday to grab a two-shot lead over Tom Gueant of Oregon (5-under 67). 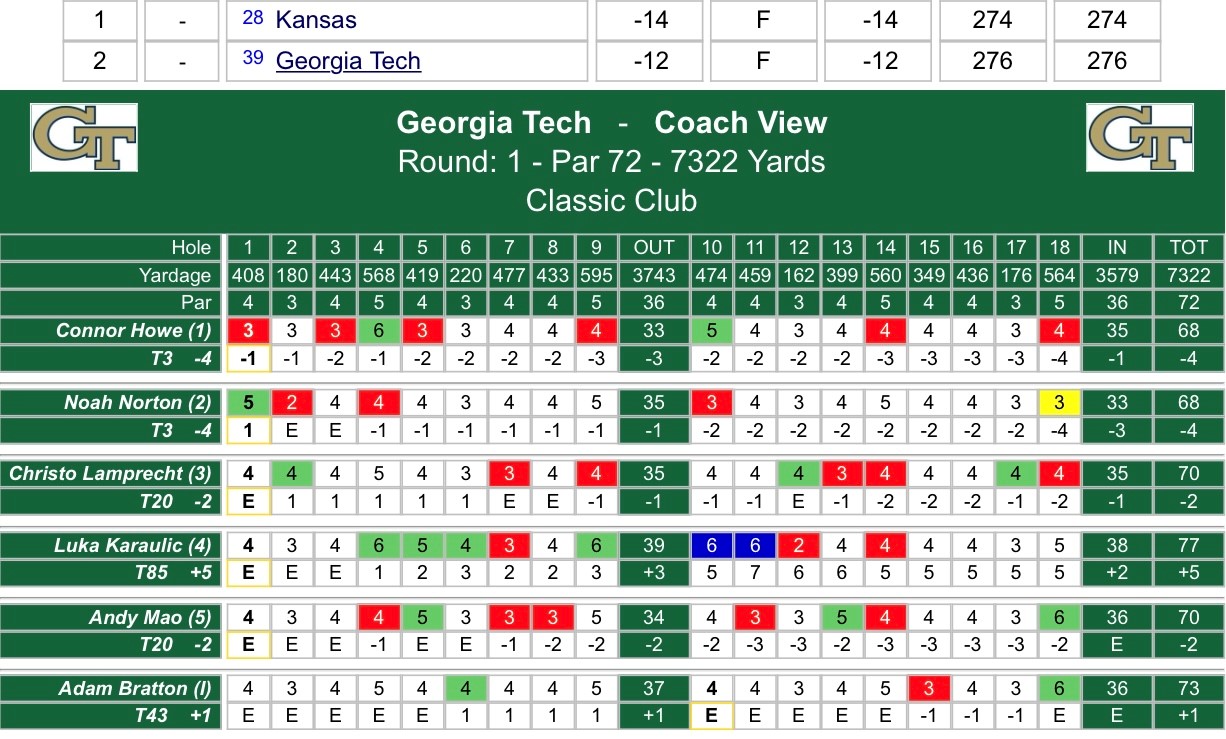 "The golf course is really good. It’s a big place, and the greens are really good. It’s scoreable depending on how the wind blows on the par 5s. Today we played them fairly well, under pretty fair conditions. We’re in the golf tournament and we’ll be playing with the leaders tomorrow. Our veterans gave us good rounds and Andy and Christo were pretty consistent throughout."

TOURNAMENT INFORMATION – Georgia Tech has played in the Amer Ari Intercollegiate every year since 1999. Tech has already played twice this spring, adding a pair of events to its spring slate after the fall season was cancelled. The 30th annual event is a 54-hole, 5-count-4 stroke-play tournament. The event this year was contested on Hapuna Golf Course (6,875 yards, par 72), rather than the usual Kings Course at the Waikoloa Beach Resort.

The change in venue is not the only effect of COVID on this year’s tournament. The field, still strong in quality, included just eight teams rather than the normal 20, with the Jackets joining Arizona State, Hawai’i, Hawai’i-Hilo, Oregon State, San Jose State. Southern California and Washington.