Jackets Wind Up 10th at Golf Club of Georgia

Alpharetta, Ga. –Tyler Strafaci fired a 4-under-par 68 to earn a top-10 finish individually, and top-ranked Georgia Tech improved to a 4-under-par team score of 284 Sunday but remained in 10th place at the finish of the Golf Club of Georgia Collegiate Invitational.

It was the lowest finish for the Yellow Jackets its home event since placing 12th in 2016. Tech returns to action and closed out its fall scheduled Oct. 28-29 at the Cypress Point Classic on the Monterrey Peninsula in California.

TECH LINEUP – Strafaci played excellent golf over his final 36 holes on the weekend, shooting 71 Saturday in steady rain, cold and wind, and a bogey-free 68 Sunday to earn himself a fifth-place finish (212, -4), the eighth top-10 finish of his career. The senior from Davie, Fla., logged his highest finish ever at the Golf Club of Georgia, having tied for 19th for his previous best last fall.

Luke Schniederjans, who had struggled the first two rounds, shooting 75-76, matched Strafaci on Sunday with a 68, recording eight birdies in his round and finishing in a tie for 24th place individually (219, +3). Tech’s other three starters, Andy Ogletree, Noah Norton and Connor Howe, each shot 74 on Sunday. Ogletree tied for 35th at 221 (+5), while Norton and Howe tied for 52nd (225, +9).

Redshirt sophomore Ben Smith (Novi, Mich.) was the best of the five Tech players competing individually, firing a 71 Sunday and finishing in a tie for 58th at 227 (+11). 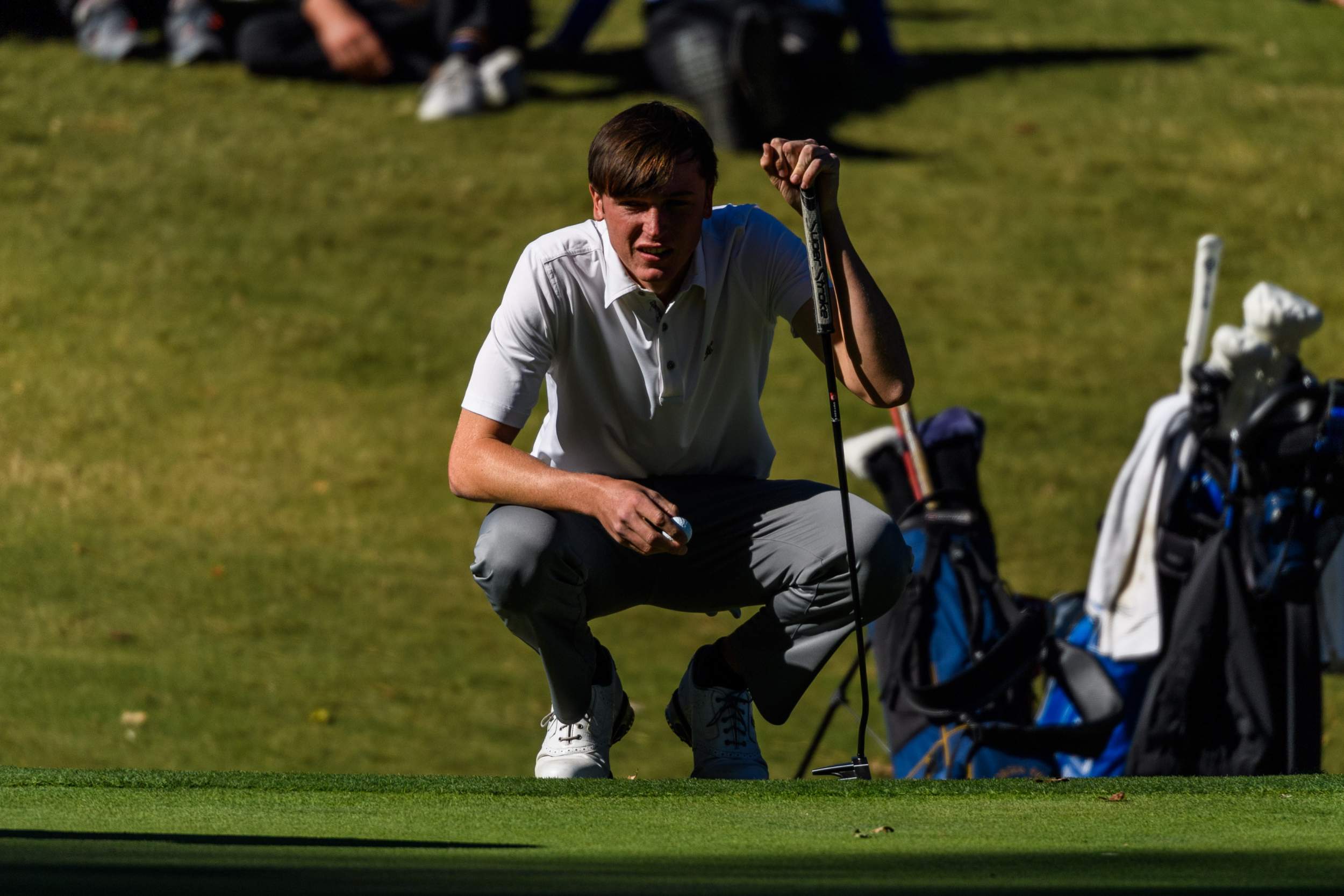 TEAM LEADERBOARD – Duke, the nation’s 10th-ranked team, posted a 1-under-par 287 Sunday to hold off hard-charging Pepperdine and capture the Golf Club of Georgia Collegiate Invitational for the first time. The Blue Devils finished as the only team under par at 2-under 862, two shots ahead of the ninth-ranked Waves (even-par 864, and placed three individuals in the top 10.

Pepperdine completed a roller-coaster weekend, having shot 12-under-par 276 Friday to take a seven-stroke lead, 19-over-par 307 in the bad-weather conditions Saturday and a 7-under 281 Sunday, the best score in the field for the final round.

Kaito Onishi of Southern California and Mark Power of Wake Forest tied for third place, two strokes back, at 5-under-par 211, with Georgia Tech’s Tyler Strafaci alone in fifth place at 212 (-4). All three players shot 68 on Sunday. Duke’s Even Katz finished sixth at 213 (-3), while the Blue Devils’ Adrien Pendaries and North Carolina’s Ryan Gerard tied for seventh at 214 (-2). Steven DiLisio was the third Duke player in the top 10, tying for ninth with Wake Forest’s Alex Fitzpatrick at 215 (-1). 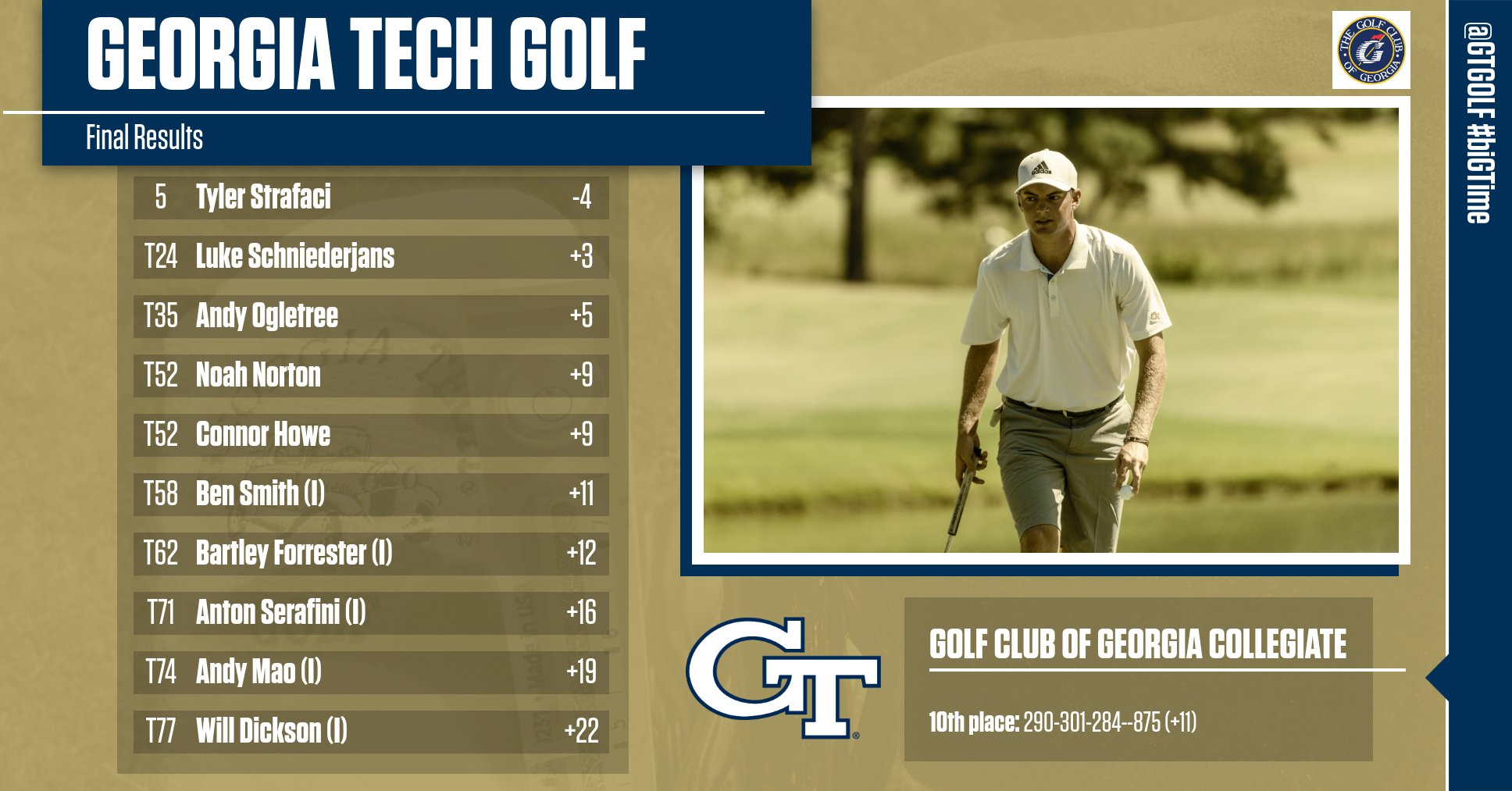 "We got off to a bad start on the first nine holes, and on this golf course, that’s where you have to get it. We got behind the eight-ball both of the first two days. Today we had a couple of really good rounds and fought our way up the leaderboard, but had a couple bogeys on the last hole. When you’re playing against good teams, every shot counts. It was a pretty disappointing weekend. This was a great field. But we’re at home, and I think we’re better than that. Tyler had a good tournament, and Luke had a good day today, so we just need to get back to work and be more consistent week to week."

The Yellow Jackets tied for third place last fall, and have finished out of the top five just three times in 14 years.