Traditionally the opening event on Tech’s spring schedule, Tech will take eight players to the tournament on the Kona Coast of the Big Island to play in the tournament for the 23rd time. Head coach Bruce Heppler’s team has already played twice, finishing seventh in the Camp Creek Seminole Invitational in Florida and the Southwestern Invitational in California. The Yellow Jackets’ slate includes seven events prior to the ACC Championship near the end of April, which will be played at the Capital City Club’s Crabapple Course in Woodstock, Ga.

TOURNAMENT INFORMATION – Georgia Tech has played in the Amer Ari Intercollegiate every year since 1999. Tech has already played twice this spring, adding a pair of events to its spring slate after the fall season was cancelled. The 30th annual event, which runs Tuesday though Thursday, is a 54-hole, 5-count-4 stroke-play tournament. The event this year will be contested on Hapuna Golf Course in Waimea (6,75 yards, par 72), rather than the usual Kings Course at the Waikoloa Beach Resort.

The change in venue is not the only effect of COVID on this year’s tournament. The field, still strong in quality, includes just eight teams rather than the normal 20, with the Jackets joining Arizona State, Hawai’i, Hawai’i-Hilo, Oregon State, San Jose State. Southern California and Washington. 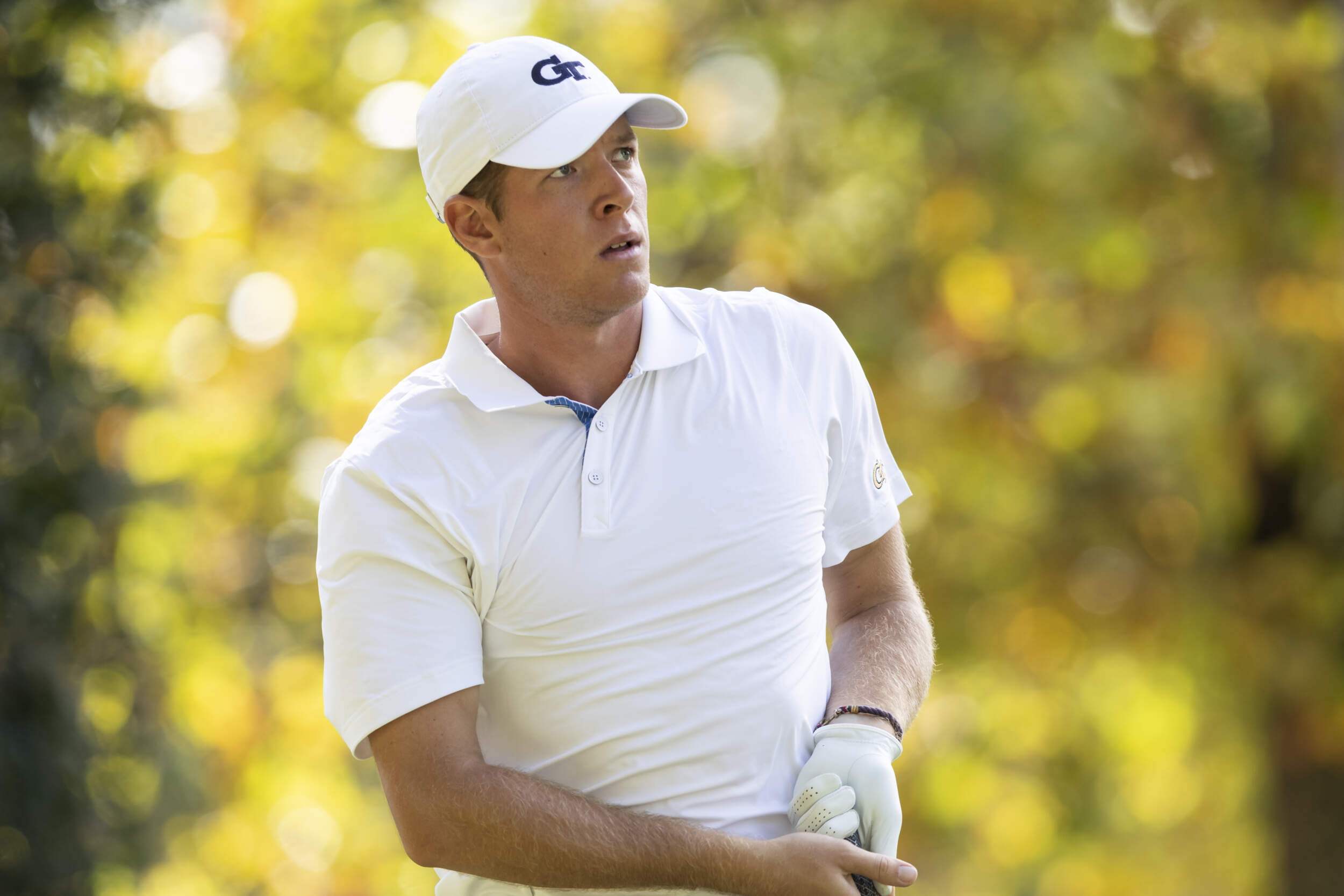 Senior Will Dickson has been Tech’s top finisher in each of its first two tournaments. (photo by Clyde Click)

TEAM UPDATE – Heppler’s 26th Yellow Jacket team is much younger than the one whose 2020 spring was abruptly ended last March. This year’s team did not play any events in the fall and collectively had seen action in a total of 54 collegiate events – 160 rounds – prior to the Camp Creek Seminole Invitational. Tech’s two elder statesmen, senior Noah Norton (Chico, Calif.) and junior Connor Howe (Ogden, Utah), own 118 of those 160 rounds between them. Beyond that, the rest of Tech’s roster is quite green.

Will Dickson, a senior from Providence, R.I., who played as an individual in two events prior to January, resurrected his game in fall amateur events and led the Yellow Jackets in their pre-spring qualifying, and has been Tech’s top finisher in both spring events. Luka Karaulic, a redshirt sophomore from Dacula, Ga., who had seen no action prior to January, played solid golf in both events.

Pairings for round 1 of the Amer Ari Intercollegiate

Dickson – After seeing action in just two events over his time at Tech, Dickson began to show promise last fall by finishing 13th or higher in all four amateur events he played, including a fourth-place effort in the Orlando International Amateur in December. He won the team’s 126-hole qualifying tournament and has been Tech’s top finisher in both January events (15th at Camp Creek Invitational, 11th at Southwestern Invitational).

Karaulic – In his third year in the program, Karaulic made his collegiate debut at the Camp Creek Invitational, earning a spot in team qualifying, and tied for 26th place as the Yellow Jackets’ No. 2 finisher (219, +3). Tied for 34th at the Southwestern Invitational (228, +12).

Lamprecht – At 6-foot-8, he may be the tallest player ever in the Tech golf program. Stewart Cink and Matt Kuchar were 6-foot-4. Current sophomore Bartley Forrester is 6-4. The top-rated member of Tech’s freshman class, he is South Africa’s No. 2-ranked amateur and a member of his country’s national team, and No. 138 in the World Amateur Golf Ranking. Tied for 32nd (227, +11) in his collegiate debut at the Southwestern Invitational.

Howe – Tied for 34th (221, +5) at Camp Creek and the Southwestern (228, +12). He has competed in 17 events as the Jackets’ No. 4 or 5 player in his first two years on The Flats, won the Southeastern Amateur last summer as well as two other regional events near his home in Utah, and tied for ninth at the Patriot All-America in December.

Norton – A California native who has been a two-time All-ACC honoree, he missed the Camp Creek Invitational due to a back injury, and struggled to a 59th-place finish at the Southwestern Invitational. Though thumb and back injuries limited him to just 10 rounds in 2019-20, Norton advanced to match play (round of 32) at the U.S. Amateur and earned his way into two Korn Ferry Tour events, tying for eighth place at the Wichita Open.

Forrester – The only member of Tech’s current team to win a collegiate tournament, sharing medalist honors at the Puerto Rico Classic last February in his second career start. He had a solid summer in amateur competition, tying for seventh place at the Palmetto Amateur and 19th at the Southeastern Amateur. He tied for 46th at the Camp Creek Invitational, and for 44th playing as an individual at the Southwestern.

Mao – Amer Ari Intercollegiate will be just his fourth collegiate event. He made the travel team for the Camp Creek Invitational and finished 43rd. Tied for 18th in his college debut at the Carpet Capital Collegiate in the fall of 2019.

Smith – Had a tie for 20th finish at the Camp Creek Seminole Invitational (217, +1), playing as an individual, but did not make the lineup to travel to the Southwestern. Former Michigan Amateur Champion has 21 collegiate rounds under his belt in two-plus years. He had three top-15 finish in fall GCAA Amateur events, tied for fifth at Orlando International Amateur and sixth at South Beach Amateur in December.