Jackets in 2nd Place at the Puerto Rico Classic

Rio Grande, Puerto Rico – Connor Howe (Ogden, Utah) fired a 4-under-par 68 to grab a share of the first-round lead, leading No. 3 Georgia Tech to a 6-under-par score of 282 and second place after the first day of the Puerto Rico Classic. The Yellow Jackets trail No. 2 Oklahoma by one stroke.

TECH LINEUP – Starting on the third hole in the shotgun start at the Rio Mar Resort’s River Course, Howe stood 1-over-par through his first seven holes, then ran off a string of five birdies in his next six holes. The sophomore finished with five straight pars to match his best round of the year.

Senior Luke Schniederjans (Powder Springs, Ga.) birdied six holes on his way to a 3-under-par 69 and is tied for third individually. Redshirt freshman Bartley Forrester (Gainesville, Ga.) matched par with a 72 and is tied for 28th, while senior Andy Ogletree (Little Rock, Miss.) posted a 73 and is tied for 38th. Senior Tyler Strafaci (Davie, Fla.) struggled to an 82 Sunday and did not count for the Jackets.

TEAM LEADERBOARD – All five Oklahoma players broke par Sunday as the Sooners posted a 7-under-par team total of 281, taking a one-shot lead over the No. 3 Yellow Jackets (282, -6). No. 18 Georgia, with one subpar round and three even-par rounds, is tied for third place with Alabama at 3-under-par 285.

No. 23 Clemson and host Purdue are tied for fifth place at 2-under-par 286, the only other teams under par for the round. Mississippi is alone in seventh place at even-par 288. 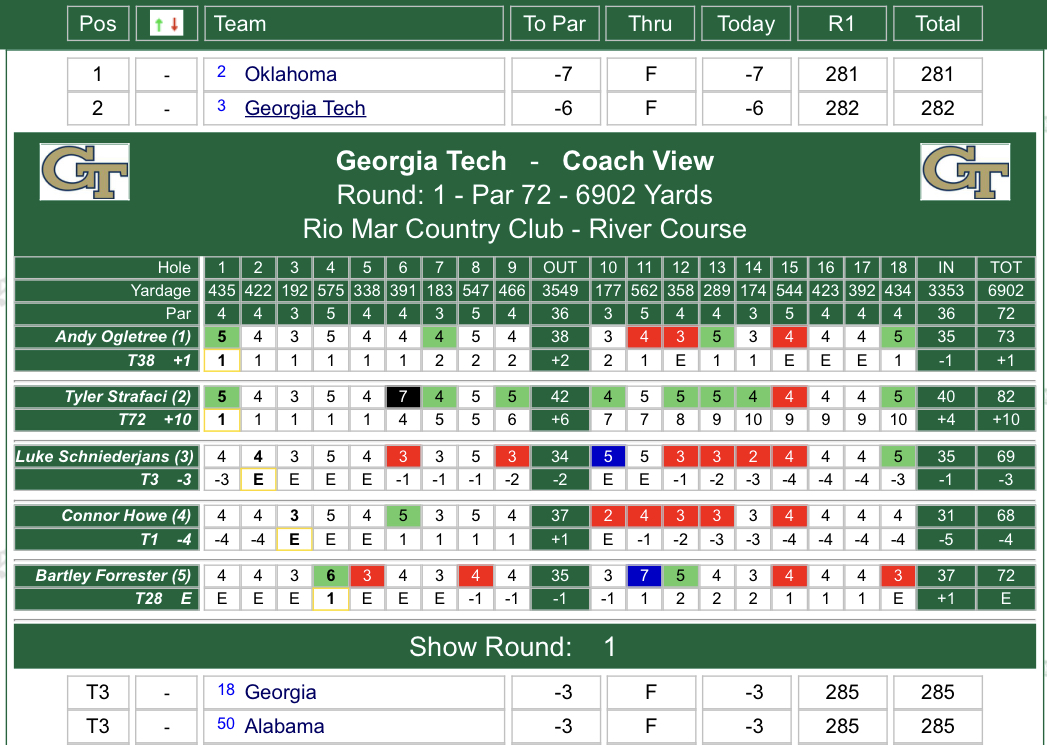 "Teams struggled to make a lot of putts and the scores weren’t as low as they typically are here, but Connor and Luke did a good job taking advantage of the holes that are scoreable, and Bartley hit a lot of really good shots today. It’s nice when your fourth and fifth guys can shoot good scores for you. All in all, a good day for us."

TOURNAMENT INFORMATION – Georgia Tech is making its 28th appearance in the Puerto Rico Classic, typically the second event on the Yellow Jackets’ spring schedule after its opening trip to Hawai’i, having participated in every renewal of this tournament. The 54-hole event runs through Tuesday with a shotgun start at 8 a.m. local time Monday, and 7:30 a.m. Tuesday. The event is played at the River Course (6,902 yards, par 72) at Rio Mar Beach and Spa Resort.