Jackets, Forrester Hold on to Win at Puerto Rico Classic

Rio Grande, Puerto Rico – Redshirt freshman Bartley Forrester (Gainesville, Ga.), fired a 3-under-par 69 Tuesday to claim a share of the individual title, and No. 3 Georgia Tech held off a late rally by No. 2 Oklahoma to claim victory at the Puerto Rico Classic.

The Yellow Jackets fired a 6-under-par 282 Tuesday to win by two shots over the Sooners, capturing their fourth tournament victory this year and the 63rd in the program’s 25 years under head coach Bruce Heppler. Tech won the Puerto Rico Classic for the seventh time in 28 appearances, and Forrester became the eighth Jacket to win medalist honors.

TECH LINEUP – Forrester, playing in just his third collegiate event, and first as a counting member of the squad, followed his second-round 66 on Monday with a solid round of golf Tuesday, recording just one bogey along with four birdies to complete 54 holes at 9-under-par 207.

Andy Ogletree (Little Rock, Miss.) shot 2-under-par 70 on Tuesday, while Luke Schniederjans (Powder Springs, Ga.) carded a 1-under-par 71, and Tyler Strafaci (Davie, Fla.) added an even-par 72 to give the Yellow Jackets a closing 6-under-par 282. Ogletree and Schniederjans both finished in a tie for sixth place at 7-under-par 209.

Sophomore Connor Howe (Ogden, Utah), who held a share of the 36-hole lead, missed a chance for his first collegiate victory after shooting 76 Tuesday, but still wound up in a tie for 13th place at 212 (-4).

Redshirt freshman Bartley Forrester picks up a victory at the Puerto Rico Classic, his third event as a Yellow Jacket. How do you feel Bart? pic.twitter.com/Ocdsg98yyr

TEAM LEADERBOARD – The final round Tuesday was a two-team battle between Georgia Tech and Oklahoma for the title. The Yellow Jackets led by as many as seven shots before finishing 54 holes at 832 (32-under-par). That was two shots better than the Sooners, who shot 283 (-5) Tuesday and had four individuals finish in the top 10, to finish at 30-under-par 834.

INDIVIDUAL LEADERBOARD – Forrester’s closing 69 put him in a share of medalist honors with two of the three 36-hole leaders, Oklahoma’s Garett Reband (70 on Tuesday) and the College of Charleston’s Logan Sowell (71). Their tournament score of 207 (-9) was one shot better than the Sooners’ Patrick Welch, who shot 71 Tuesday, and Georgia’s Trent Phillips, whose 66 matched the low round of the tournament.

Andy Ogletree and Luke Schniederjans tied for sixth at 7-under-par 209 with Oklahoma’s Quade Cummins. A fourth Sooner, Jake Holbrook, finished among a trio of golfers at 6-under-par 210.

"To see all my hard work pay off with a win is the most gratifying feeling. I hit the ball probably the best I’ve ever hit it, and I made enough putts to get the job done."

TOURNAMENT INFORMATION – Georgia Tech made its 28th appearance in the Puerto Rico Classic, typically the second event on the Yellow Jackets’ spring schedule after its opening trip to Hawai’i, having participated in every renewal of this tournament. The 54-hole event is played at the River Course (6,902 yards, par 72) at Rio Mar Beach and Spa Resort. 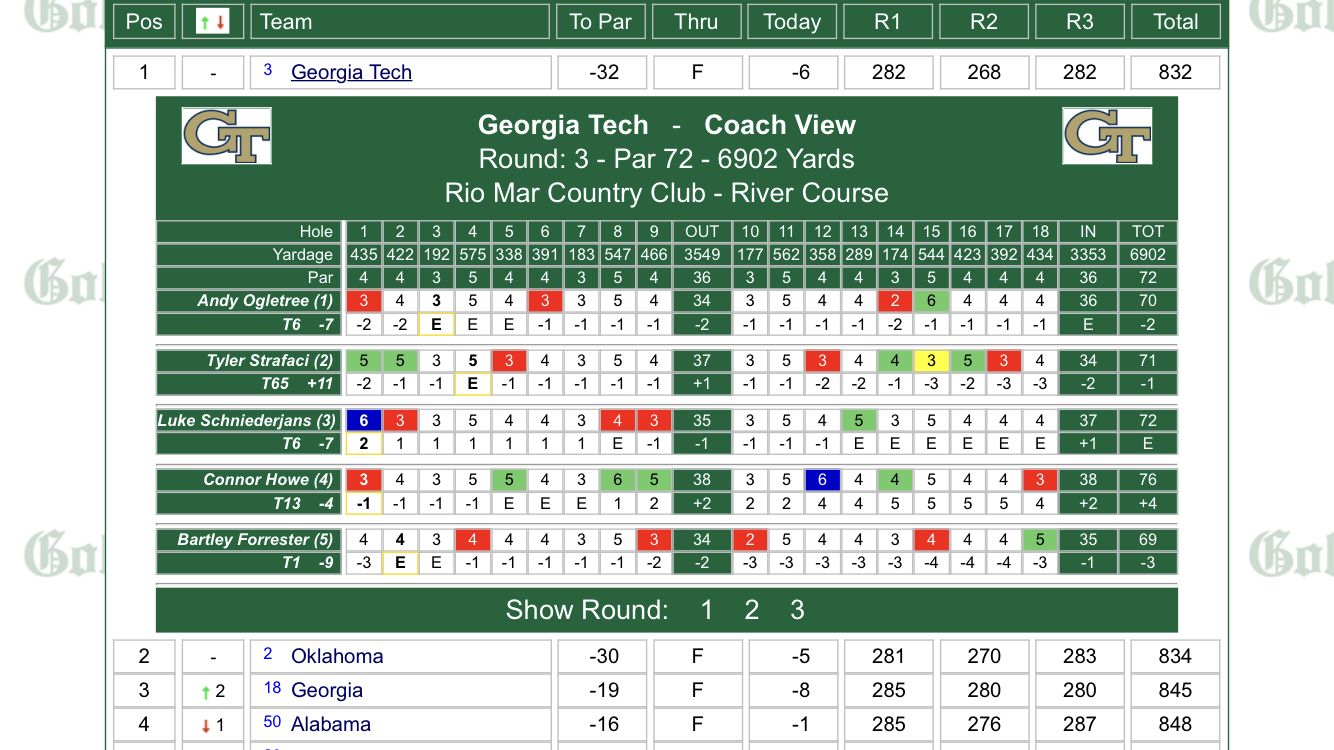