THE FLATS – Luke Schniederjans fired a 5-under-par 67 and Tyler Strafaci added a 3-under 69 Saturday as No. 3 Georgia Tech built its lead to 12 strokes over North Florida after two rounds of the 31st Carpet Capital Collegiate at The Farm Golf Club in Rocky Face, Ga.

The Yellow Jackets will look for their 10th title in the team’s traditional season-opener when they begin Sunday’s final round at 9:40 a.m., paired with the Ospreys and No. 21 Alabama. Schniederjans, a senior from Powder Springs, Ga., goes for his second win in the tournament.

TECH LINEUP – Seniors Schniederjans (Powder Springs, Ga.) and Strafaci (Davie, Fla.) carried the day on a day when Tech was missing junior Noah Norton, who came up with back spasms and was unable to play, meaning the Yellow Jackets would have no high score to drop. Still, the Jackets were the only team to finish the round under par as a team at 3-under-par 285.

Schniederjans racked up eight birdies and leads the field with 14 over two rounds, finishing 36 holes at 9-under-par 135 and grabbing the outright lead in the medal race. Strafaci posted five birdies against a pair of bogeys for his 69 and is tied for second.

Freshman Andy Mao (Johns Creek, Ga.) chipped in with a 1-under-par 71 with six birdies on his card, and is tied for third in most birdies for the tournament (10). Redshirt sophomore Ben Smith (Novi, Mich.) shot 78.

The Jackets have piled up 43 birdies over two days despite the difficulty of the golf course, 10 more than North Florida. 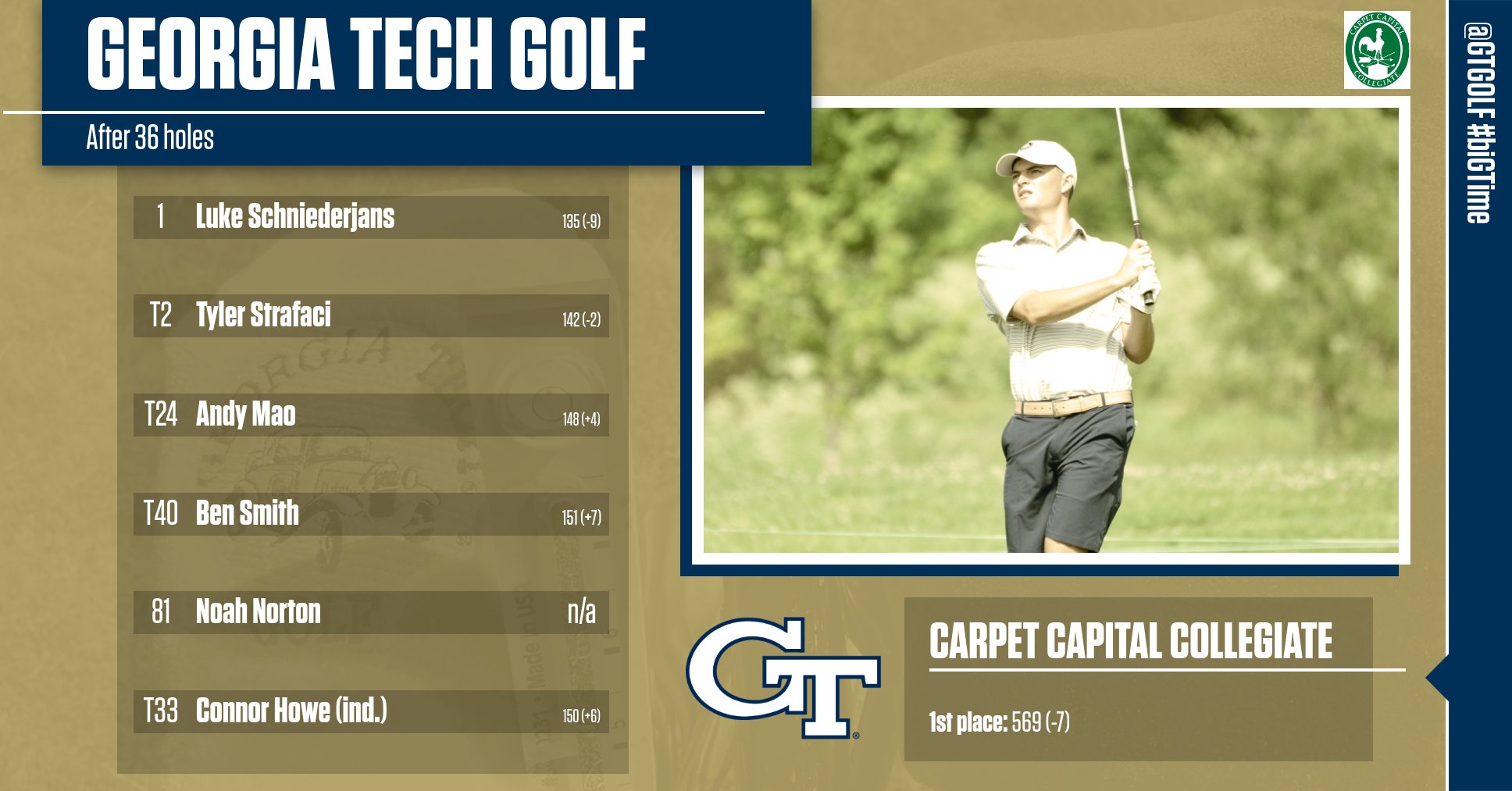 INDIVIDUAL LEADERBOARD – Schniederjans’ 67 was the low round of the day, giving him a 9-under-par total of 135. Charlotte’s Mark Boucher matched Schniederjans on Saturday, but the 49ers senior sits seven strokes back at 2-under-par 142, tied with Strafaci. North Florida’s Michael Mattiace headlines a group of seven players tied for fourth at 1-under-par 143.

"That’s kind of what we need, and [Tech’s seniors] were solid today. Today was really special day because everything counted. Ty finished much better today and played the back nine really well. For Luke, it’s his last year, and he’s an All-American. It’s different level of focus, he’s zeroed in and he’s playing great. Andy has played 33 really good holes. He’s had a couple holes give him trouble, but he just smiles about it and moves on. He’s made 10 birdies over two days, so that means he’s really playing good golf. To shoot under par without Noah was a really good day."

Freshman Andy Mao has carded 10 birdies over 36 holes, tied for third in the field.

TOURNAMENT INFORMATION – The Carpet Capital Collegiate concludes Sunday at The Farm Golf Club, a 7,180-yard, par 72 layout designed by Tom Fazio near Dalton, Ga. The Yellow Jackets have been the institutional host of this event since its inception in 1989, winning or sharing nine titles, most recently last fall with Tennessee. The 15-team field for this year’s event includes Clemson and Virginia from the Atlantic Coast Conference, as well as Auburn, Alabama, South Carolina and Tennessee from the Southeastern Conference.