Rio Grande, Puerto Rico – Luke Schniederjans fired a 4-under-par 68, and Andy Ogletree completed his best career performance with a 71 Tuesday, and No. 4 Georgia Tech posted a 5-under-par 283 to claim a share of the championship at the 27th annual Puerto Rico Classic.

With a piece of the title, Georgia Tech notched its fourth victory this year, three in stroke-play events, and its 57th in the 24-year tenure of head coach Bruce Heppler.

TECH LINEUP – Schniederjans played his best round since the opening day of the Golf Club of Georgia Collegiate in the fall. Recording six birdies against a pair of bogeys along the way to a 4-under-par par 68, which improved his position individually to a tie for 15th place at 214 (-2). The junior from Powder Springs, Ga., has three top-10 finishes this year and two other top-20 efforts.

Ogletree finished off the best effort of his career and his first top-10 finish of the year, getting an eagle and a pair of birdies on the way to a 1-under-par 71. The junior from Little Rock, Miss., had the best week of any player on the par-5 holes (-8) and tied for fourth place individually at 211 (-5), best among the Yellow Jackets in this event.

Junior Tyler Strafaci (Davie, Fla.) and freshman Connor Howe (Ogden, Utah) provided the Jackets’ other two counting scores Tuesday, each with an even-par 72. Strafaci claimed his third top-10 finish this year, tying for seventh place at 212 (-4), while Howe tied for 43rd. Noah Norton, who shared the 36-hole lead, did not count for Tech Tuesday after carding a 73, but also tied for seventh place, his second top-10 finish of the year. 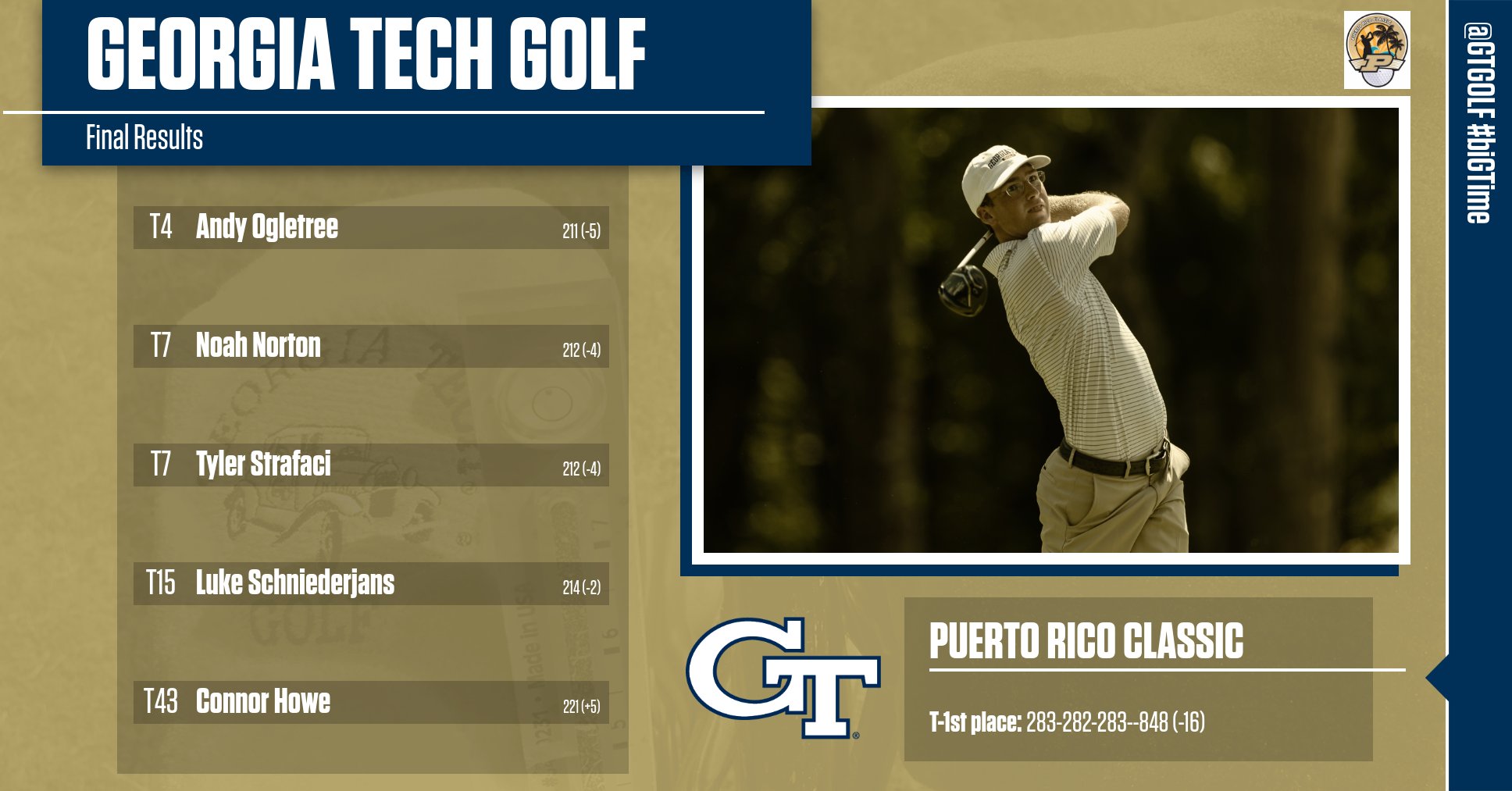 Tech began the day with a one-stroke lead over NC State and a three-shot lead over Georgia, with Oklahoma in fourth place. The Sooners surged early and pulled into a tie with Tech but leveled off. The Yellow Jackets built a five-stroke lead and got to 20-under-par on the back nine, but Tech struggled coming home while the Bulldogs rallied, and the lead changed hands twice over the final few holes.

With the Jackets clinging to a two-shot lead, Norton hit a couple of stray shots on the par-4 17th hole and wound up with an 8, giving Georgia a two-shot lead. The Bulldogs’ Trent Phillips, who lifted his team into the lead with an eagle at the par-5 15th and a birdie at 16, hit a shot into the hazard at the final hole and round up with a triple-bogey, leaving the teams tied.

The Bulldogs and Sooners, along with Purdue, posted the best rounds of the day at 8-under-par 280, while the Yellow Jackets posted a 5-under-par round of 283.

INDIVIDUAL LEADERBOARD – The late troubles for Norton and Phillips, who both held at least a share of the lead Tuesday, cost both players a chance at medalist honors, which were shared by Clemson’s Bryson Nimmer, NC State’s Benjamin Shipp and Middle Tennessee State’s Marcus Byrd. The three players finished at 6-under-par 210.

Tech’s Andy Ogletree tied for fourth place at 211 (-5) with Phillips and his sibling teammate, Trevor. Norton and Tyler Strafaci finished in a six-way tie for seventh place at 212 (-4).

Twenty of the 75 players in the field finished the tournament under par.

COACH BRUCE HEPPLER SAYS – “We played well today given the wind and rain at the end of the round. We didn’t putt the greens here very well, but we played well overall, and we’re happy to get out of here with a win, or at least a share of it.”

TOURNAMENT INFORMATION – Georgia Tech made its 27th appearance in the Puerto Rico Classic, typically the second event on the Yellow Jackets’ spring schedule after its opening trip to Hawai’i, having participated in every renewal of this tournament. The 54-hole event is played at the Rio Mar Beach and Resort’s River Course (6,902 yards, par 72).