THE FLATS – Matt Kuchar gets two cracks at a victory on a comfortable golf course at Muirfield … Charlie Rymer is back home after a “scary” bout with Covid-19 … Richy Werenski continues to improve since play resumed … J.T. Griffin and Ollie Schniederjans continue solid play on Korn Ferry Tour … More details below in this week’s Georgia Tech #ProJackets Report.

The PGA Tour and the Memorial Tournament announced Monday that despite a robust health and safety plan and State of Ohio approval for limited patron attendance, the world-renowned event founded and hosted by Jack Nicklaus will instead be held without fans on site and with no pro-am, due to the rapidly changing dynamics of the COVID-19 pandemic. The news comes as many of the world’s best players arrive at Muirfield Village Golf Club for an unprecedented two-week swing at the “Course that Jack Built” — the Workday Charity Open this week, followed by the Memorial Tournament, with the 45th edition of the Tournament being staged July 14-19.  Read more

Retired PGA Tour pro and former Golf Channel personality Charlie Rymer is back home after being hospitalized with COVID-19. Rymer, 52, who left Golf Channel in 2018 and now serves as an ambassador for Myrtle Beach, South Carolina, detailed his battle with the novel coronavirus on Twitter and to famed writer John Feinstein in a Golf Digest article. Read more

Buzz is quite the therapy dog! An afternoon Waccamaw River cruise on a tritoon with him will definitely get your attitude right! Especially with some @KipMooreMusic crankin! pic.twitter.com/ippVjhy98Y

KUCHAR A FAVORITE AT MUIRFIELD

The 2013 Memorial Tournament is one of Matt Kuchar’s nine PGA Tour victories, and the former Yellow Jacket will get two cracks at winning at Muirfield Village over the next two weeks, beginning this week when he competes in the Workday Charity Open, a one-time event that fills a spot vacated by the cancelled John Deere Classic. Workday also is one of Kuchar’s primary sponsors.

“He’s comfy here. Prior to an uncharacteristically poor showing at Muirfield Village last year, he went 11-for-11 from 2007-2018 with a win, a T2 and another three top fives among 10 top 15s,” writes Rob Bolton on PGATour.com.  Read more

Kuchar will be joined for the Workday event by Stewart Cink, Chesson Hadley, Cameron Tringale and Richy Werenski.  Inside the field 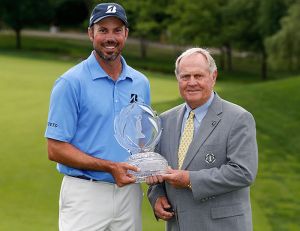 Richy Werenski has finished T58 (Charles Schwab Challenge), T46 (Travelers Championship) and T21 (Rocket Mortgage Classic) in the last three weeks since competition returned, and improved his FedEx Cup position 10 more spots last week after opening with rounds of 67-66 at the Detroit Golf Club and finishing with a 13-under-par 275. Cameron Tringale closed with a 69 tied for 30th at 12-under 276 and sits 93rd in FedEx Cup points.

J.T. Griffin posted his best finish since golf resumed, tying for 17th place along with Ollie Schniederjans at the TPC Colorado Championship. The 33-year-old Griffin was among a group of six first-round co-leaders, but stumbled to a 75 in round 2 before finishing 69-69 for an 8-under-par 280. The former Georgia Tech standout carded three top-10 finishes in four starts prior to the hiatus, and sits at No. 28 in the Korn Ferry points race.

“I gave some online lessons (during the break) and it was good to get some rent paid, but I don’t know if looking at golf swings is a great idea if you want to play professionally,” Griffin told PGATour.com. “It got me thinking about my own swing a little more. It was really fun to talk to some people and try to help them as much as I can. But I hope I don’t have to do that in the long run.”

Schniederjans posted an identical total of 280 after his closing 66, and improved to No. 37 in Korn Ferry points.

Paul Haley II, who lost a playoff and tied for second place at the previous week’s Utah Championship, missed the cut and fell to 34th on the points list. He talked about his comeback to the Korn Ferry Tour to the Salt Lake Tribune.

Griffin, Haley and Schniederjans are back in action along with Anders Albertson, Reeves and Thompson.

The PGA Tour Champions had been set to resume this week with the Bridgestone Senior Players Championship at venerable Firestone Country Club in Akron, Ohio, but that event has been pushed back to Aug. 13-16. The senior tour is now set to return to action July 30 with The Ally Challenge in Grand Blanc, Mich.

Happy 4th of July! I hope everyone has a fun filled day celebrating our country’s independence. It is a privilege to live here and have the freedom we have. God Bless America. USA USA USA! pic.twitter.com/DtRDxyqfZ7

Look good, feel good, play good. 😎@JTGriffinGolf rides a fresh haircut and 5-under 67 to a tie at the top of the leaderboard @TPC_ColoradoHL. pic.twitter.com/I8gZG2aMTz

*Giveaway 🚨 Time*. I am stoked to be back in the 313 for the @rocketclassic and the nostalgia is real. A lot sure can happen in a year, and even though much has changed, I am beyond grateful to continue to play the game I love. As a thanks to all those who supported last year, and the fans I miss this year, I wanted to give away 3 special edition @GreysonClothiers polos with the Detroit 313 logo on the left sleeve. These are the exact shirts I wore last year en route to a top 5 finish. Birds of Prey, Batweb, and Blue Valentine Polos, size Medium. To enter, simply: Follow me and @greysonclothiers Like this photo Tag a friend in the comments One lucky winner will be announced on Tuesday, July 7th! Good luck. Photo creds: Gregory Shamus for Times Union