The general consensus is that the PGA Tour made a safe and triumphant return last weekend after a 13-week hiatus, with the Charles Schwab Challenge played with no fans in attendance and decided in a dramatic final nine holes and a playoff at Colonial Country Club.

From Golfweek magazine: “Its reward after more than 90 intense days of discussion that produced safety protocols and a detailed plan to produce a “bubble” of protection aimed to reduce the risk of the coronavirus was a stacked leaderboard and a Sunday stampede unfortunately played out in front of no spectators. But players made the noise, and eight held at least a share of the lead during the final round before Berger and Collin Morikawa survived the heated battle on a sunlit day and headed to extra holes.  Read more

From Golf.com: A roundtable of discussion including some of the magazine’s writers and John Wood, caddie for former Yellow Jacket Matt Kuchar. Interesting comments from him. Read more

HOW THE JACKETS FARED

Four former Jackets were in the field – Chesson Hadley, Matt Kuchar, Richy Werenski and amateur Andy Ogletree – were in the field, with Hadley and Werenski making the cut. Hadley played himself into possible contention with a Saturday 64, but wound up in a tie for 23rd place at 8-under-par 272. Werenski tied for 58th place at even-par 280.

Ogletree, a two-time All-American who graduated from Tech in May and remains an amateur, played in his inaugural PGA Tour event on a sponsor exemption, posting rounds of 73-69 to miss the cut. Kuchar also missed the cut after rounds of 71-68.

Ogletree also has a sponsor exemption into this week’s RBC Heritage at Hilton Head, S.C., which has a strong 155-player field with 114 former Tour winners. Stewart Cink, a two-time champion at Hilton Head (2000, 2004) and Kuchar, the 2014 champion, also are in the field along with Hadley and Cameron Tringale.

J.T. Griffin, who has the highest points ranking (No. 25) of any Jacket on the Korn Ferry Tour, and Seth Reeves missed the cut. Four other Jackets – Chris Petefish, Ollie Schniederjans, Luke Schniederjans and Nicholas Thompson – attempted to Monday qualify for the event but fell short.

Albertson, Griffin, Ollie Schniederjans, Thompson, Werenski and Whaley are in the field this week for the King & Bear Classic at the World Golf Village in St. Augustine, Fla.

Chris Petefish (right in photo at top) picked up his second first-place check in a week when he shared the title at the rain-shortened SwingThought Tour event at Disney Palm in Orlando, Fla. He and longtime friend Gregor Main shot 9-under-par 63, and Petefish had the lead to himself in round 2 before weather forced cancellation. I week earlier, Petefish had won the Tallahassee Open Pro-Am Classic, and also fell short in a Monday qualifier for the Korn Ferry Challenge.

After missing out on Monday qualifying for the Korn Ferry Challenge, Ollie and Luke Schniederjans competed in an event on the Unbridled Tour that was taking place at Flemings Island Golf Club in Jacksonville, Fla. The event drew some competitors with PGA Tour experience and carried a $10,000 first prize. Ollie tied for eighth place at 14-under-par 199, while Luke tied for 14th place at 13-under 2000.

KUCHAR TO STAR IN VIDEO GAME 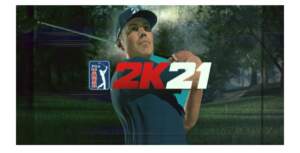 Gosh it was awesome to get back out there today. Got the competitive juices going again and turned on the grind.

The @PGATOUR has done a great job of getting us back out here while keeping us safe at the same time. Kudos to them. Here’s to a healthy and success come back!

Found a @Titleist Professional 90 wound ball from the late 1990’s in the heap today at practice. Did a Two ball driver Trackman comparison between it and a Pro-v1. The balls performed similarly except for one glaring difference: Ball Speed. The wound ball was a full 8MPH slower!

We’ve had this little bird nest on our front porch for awhile. Looks like the general contractor decided to add a snake skin to the materials. pic.twitter.com/dkLaBrNjxf

Bryson won the NCAA, the US Am, the Memorial, and whatever else he’s won…35 yards ago. If he doesn’t get significantly worse at another part of the game, or get hurt…lookout.