THE FLATS  –  Looking to defend its 2018 conference title, Georgia Tech’s No. 8 golf team returns to one of its favorite golf courses this weekend to compete in the Atlantic Coast Conference Men’s Golf Championship at the Old North State Club on the banks of Badin Lake in New London, N.C.

The scheduled for the tournament has been altered to avoid expected bad weather on Friday, the day on which round 2 was scheduled. The teams will now play 36 holes (rounds 1 and 2) Thursday beginning at 7:30 a.m., and the ACC will then determine the schedule for round 3.

TOURNAMENT INFORMATION – The 66th annual Atlantic Coast Conference Men’s Golf Championship will be held Thursday, Friday and Saturday, at the Old North State Club in New London, N.C., which has hosted the event 22 of the last 25 years. Old North State is a 7,102-yard, par 72 layout adjacent to Badin Lake, about 50 miles north of Charlotte, N.C.

The championship is contested over 54 holes. Seeding for the championship is based on Golfstat rankings: eight ACC teams are ranked in the Golfstat Top 30, with Wake Forest leading the way at No. 3 followed by No. 8 Georgia Tech, No. 9 Duke, No. 18 Clemson, No. 21 Louisville, No. 23 North Carolina, No. 26 NC State, and No. 29 Florida State.

Eleven of Georgia Tech’s 17 ACC men’s golf championships have been won at the Old North State Club, most recently in 2018, when the Yellow Jackets won the title by two strokes over Clemson. Wake Forest leads all schools with 18 league titles and 22 individual champions. Tech, which has won 15 outright ACC Championships and shared two more, has produced 11 individual medalists since joining the conference in 1979. North Carolina is third with 11 titles (10 outright), followed by Clemson with 10 (nine outright) and Duke with nine.

Pairings and tee times for Friday and Saturday will be based on team score. The video coverage of the championship will be streamed live on ACC Network Extra beginning at 2 p.m. on Saturday and 1 p.m. on Sunday. There is no charge for admission for fans. 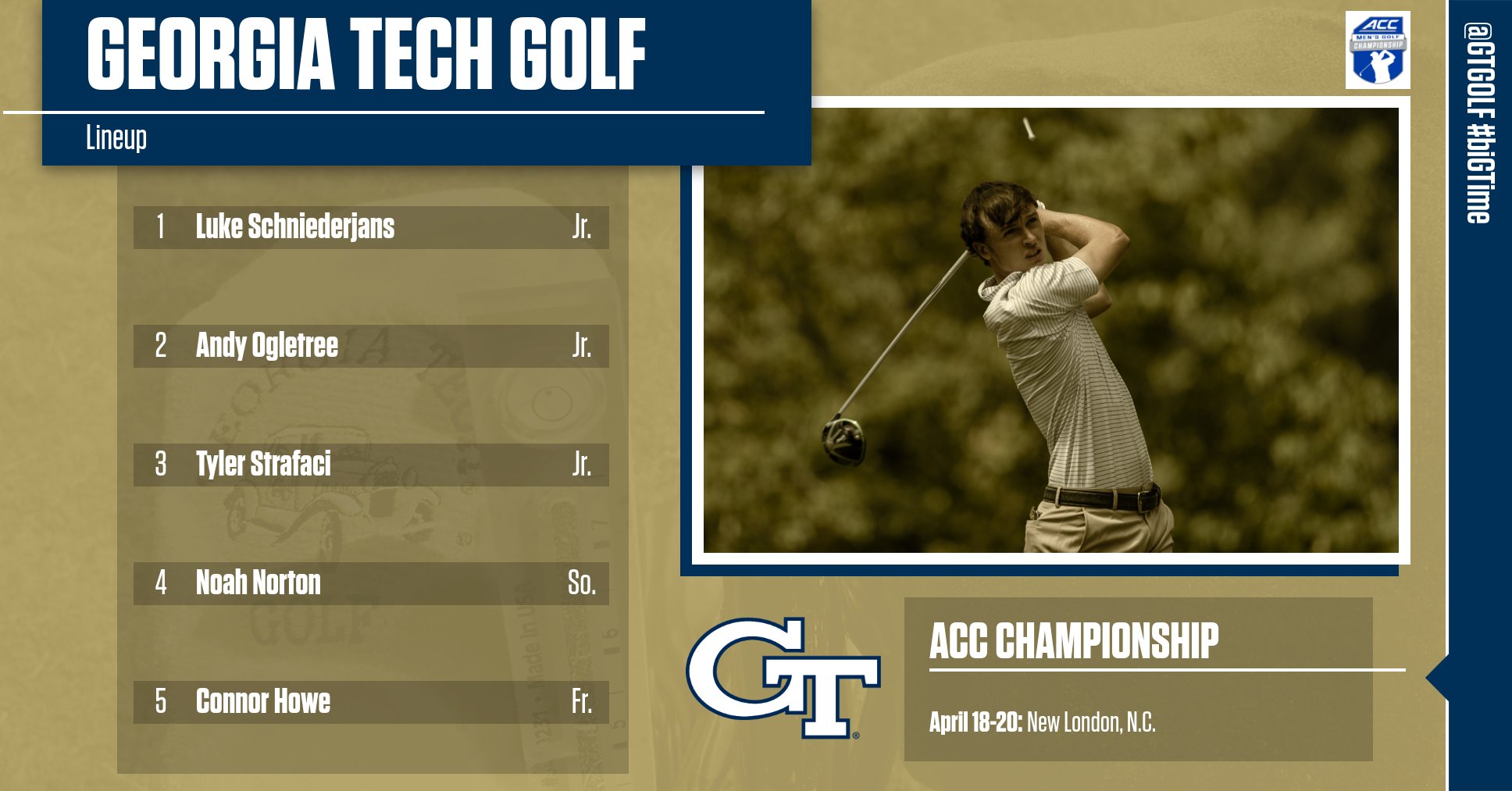 TEAM UPDATE – The Yellow Jackets stand No. 8 in the nation in the Golfstat, and No. 5 in the Golfweek/Sagarin rankings and No. 8 in the Bushnell Coaches Poll. Tech has won four stroke play events this year, including a share of the Puerto Rico Classic title and an 11-stroke victory at the Clemson Invitational this spring. Tech finished sixth at the Southern Highlands Collegiate after holding the 36-hole lead, and was 12th in the Valspar Collegiate Invitational, both against extremely strong fields, prior to winning the Clemson event the first weekend of April.

Four Yellow Jackets playing this week are ranked 65 or higher in the national Golfstat rankings, led by Ogletree (No. 26), who has been the Yellow Jackets’ top finisher in four of Tech’s five spring events and has three top-10 finishes. He is followed by Schniederjans (No. 29), Strafaci (No. 50) and Norton (No. 65). Those four have combined for 14 top-10 finishes (Schniederjans and Strafaci each have four, Ogletree and Norton each have three). They are separated by less than a stroke in stroke average, with Schniederjans leading the way at 70.04.

Howe, with a 72.48 stroke average in 21 rounds, is playing in his fifth straight event as a counting member of the travel team, having tied for 22nd at the Clemson Invitational.

COACH BRUCE HEPPLER ON THE ACC – “Wake Forest has had a tremendous spring. You’re looking at eight teams in the top 30. No one’s talking about Louisville, but they’ve played some really nice golf. They’ve got some guys at the top of their lineup who are really good. Same for NC State. Duke’s really, really good. They’re as complete a team as anybody. Clemson’s lost a guy who has struggled for them, but if he’s squared away, they’d be a top-10 team. Florida State has a guy who could be player of the year in the conference, and when you have that, you’ve got a chance. North Carolina has had the best year they’ve had in a long time, and they have experienced guys. So it could come from anywhere.”

Georgia Tech’s golf team is in its 24th year under head coach Bruce Heppler, having won 58 tournaments in his tenure. The Yellow Jackets have won 17 Atlantic Coast Conference Championships, made 28 appearances in the NCAA Championship and been the national runner-up four times. Connect with Georgia Tech Golf on social media by liking their Facebook page, or following on Twitter (@GTGolf). For more information on Tech golf, visit Ramblinwreck.com.