THE FLATS  –  Georgia Tech’s No. 8-ranked golf team, which earned an automatic bid to the NCAA Men’s Golf Championship by winning the ACC Championship two weeks ago, and has been assigned to compete as the No. 2 seed in the NCAA Pullman (Wash.) Regional, to be played May 13-15 at Palouse Ridge Golf Club.

The Yellow Jackets are playing in an NCAA regional for the 22nd straight year and for the 29th time in the 31 years the NCAA has used a regional qualifying format for its championship. They are part of a regional field that includes 14 teams and five individuals.

Tech is playing in an NCAA regional on the West Coast for the fourth time in the last five years, having played in San Diego, Calif. (2015), Tucson, Ariz. (2016) and Stanford, Calif. (2017) before playing last year in Raleigh, N.C. The Yellow Jackets look to advance to the NCAA Championship for the first time since 2015, having come down to the final hole and failing to qualify by one stroke each of the past two years.

The Yellow Jackets are no stranger to traveling out West, having played a fall tournament in Arizona each of the last three years and regularly playing spring events in Hawai’i and Las Vegas.

Nine Atlantic Coast Conference teams were selected to compete in the 2019 NCAA regionals. The nine league representatives – Clemson, Duke, Florida State, Georgia Tech, Louisville, North Carolina, NC State, Virginia, and Wake Forest – are the second most from any conference. It marks the 13th time in the last 14 years that at least eight ACC teams have earned a bid. 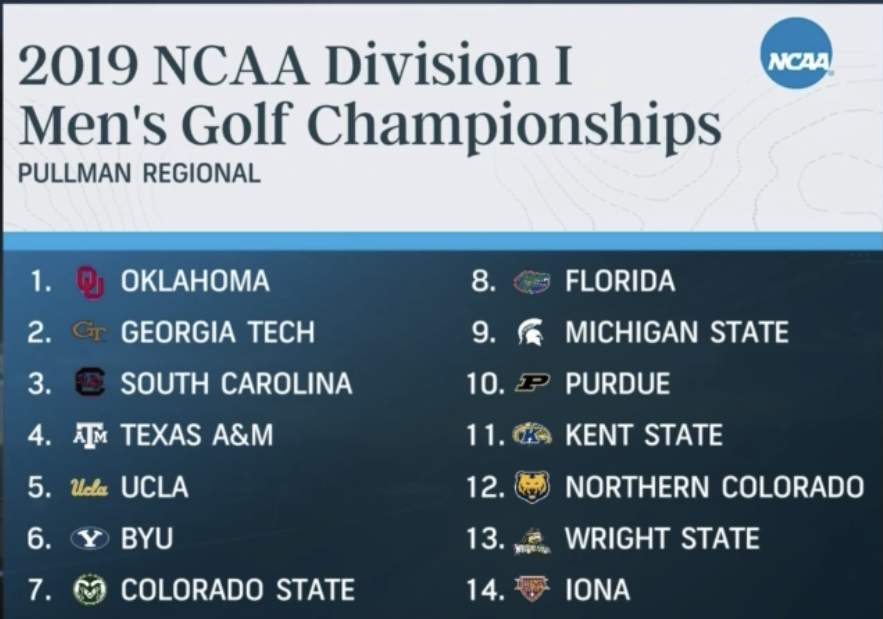 Palouse Ridge Golf Club will measure 7,246 yards and play to a par of 70 for the Pullman Regional. It is located at the East edge of the Washington State University campus and opened in 2008.

The NCAA uses a regional qualifying format for its championship, with 81 teams and 45 individuals competing for spots in the NCAA Division I Men’s Golf Championship, which will be contested May 24-29 at Blessings Golf Club in Fayetteville, Ark. Of the 81 teams, 31 were automatic qualifiers by winning their conference championships, and the other 50 earned at-large bids.

TEAM UPDATE – The Yellow Jackets stand No. 8 in the nation in the Golfstat, and No. 2 in the Golfweek/Sagarin rankings and No. 4 in the Bushnell Coaches Poll. Tech has won six tournaments this year, one shy of the all-time high of seven won by the 2001-02 and 2013-14 teams and more than any other team in Division I golf. (Golfstat rankings are used to seed teams in NCAA regionals, which is why the Yellow Jackets are a No. 2 seed.) 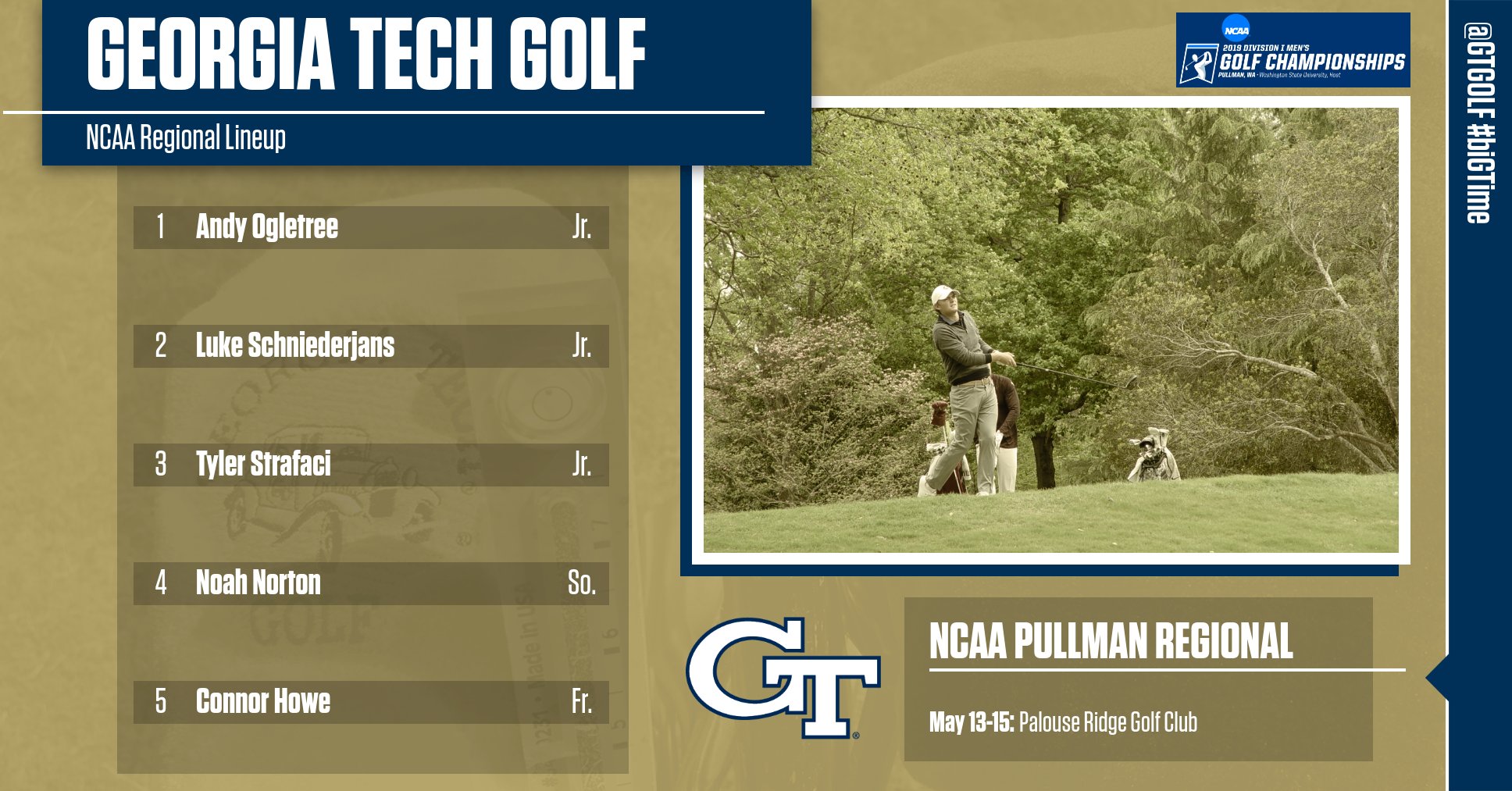 Four Yellow Jackets playing in the NCAA regional, each of whom have played all 10 team events this year, are ranked 66th or higher in the national Golfstat rankings. Ogletree (No. 15), who has been the Yellow Jackets’ top finisher in five of Tech’s six spring events and has four top-10 finishes, including a runner-up performance at the ACC Championship, is the team’s highest ranked player, followed by Schniederjans (No. 19), Strafaci (No. 50) and Norton (No. 66). They have combined for 16 top-10 finishes (Schniederjans has five, Ogletree and Strafaci each have four, Norton has three). They are separated by less than a stroke in stroke average, with Ogletree and Schniederjans leading the way at 69.96.

Howe, with a 72.25 stroke average in 24 rounds, is playing in his sixth straight event as a counting member of the travel team, having tied for 14th place at the ACC Championship.

COACH BRUCE HEPPLER SAYS – “The biggest downside to playing out West is that it prevents some of the parents from coming to see their sons play. But we’ve never been there, and we always try and go early to get some fun things in. When we went to Palo Alto, we were able to play at the Olympic Club and see a San Francisco Giants game. That’s part of the memories. We’ll go to Washington and do some stuff, and we’ll go play. We’re prepared.

“The course is a lot of drivers, and one side of the fairways is always a good miss. It has bentgrass greens with a little Poa Annua in them, somewhat flat. It’s a course that if the wind blows, it’s really hard. If it’s not, the course is gettable. The forecast shows we have some good weather to play in.”