Atlanta, Ga. – Former Georgia Tech All-American and veteran PGA Tour golfer Stewart Cink has been named the professional sports recipient of the 15th Annual Coach Wooden Citizenship Cup, an award given to the most outstanding role models among athletes.

Cink and other recipients of the Wooden Citizen Cup Award will be honored at its 2019 awards ceremony, to be held April 25 at SunTrust Park in Atlanta. Bob Ryan, the famed sportswriter for the Boston Globe and analyst for ESPN, will serve as the Master of Ceremonies. The dinner begins at 6 p.m. in the SunTrust Park Infiniti Club, and tickets can be purchased here.

Since turning pro, Stewart Cink has established himself as one of the most popular and philanthropic players on the PGA Tour.  In 2017, he was awarded the Payne Stewart Award in recognition of his philanthropic endeavors, his commitment to growing the game, his professionalism, and the distinguished manner in which he embraces the values of golf. 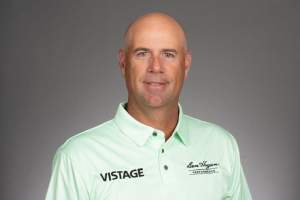 Founded by Athletes for a Better World (ABW), a non-profit organization committed to changing the culture of American sports, the Wooden Cup is unique in that it is open to athletes in all high school, collegiate, Olympic, and professional sports. Annual nominations are open to every division and conference in college sports, and to athletes in public and private high schools across the country in partnership with the National Interscholastic Athletic Administrators Association.  The Wooden Cup is becoming one of the most prestigious awards in all of sports. Previous professional recipients include Jack Nicklaus, Pat Summitt, Dikembe Mutombo, Drew Brees, Mia Hamm, Peyton Manning, John Smoltz, John Lynch, Andrea Yaeger, Shannon Miller and Cal Ripken, Jr.

John Wooden, who won ten national championships during the years 1964-1975 as basketball coach at UCLA, is commonly regarded as the greatest college coach of any sport who ever lived. Universally regarded as one of the finest human beings to ever grace the world of sports, his character, conduct and selfless gifts stand at the highest level by any standard. When Coach Wooden learned about Athletes for a Better World, he gave authorization to attach his name to this annual award, and he attended and addressed the inaugural event in Los Angeles in 2005. In his honor, the Coach Wooden Citizenship Cup is presented to four distinguished athletes, one collegiate, one professional or Olympic, and a male and female from the high school ranks, for their character and leadership both on and off the field.