Basketball will be available for public consumption in mere days, and when the Georgia Tech men’s team lifts the curtain for a contest against Florida Tech, the Yellow Jackets will look different than you might remember them.

This seems like a good time to look around the roster, and ask what head coach Josh Pastner thinks he has to work with in his third season on The Flats.

They’ll run around more, yet will not be fully formed Saturday at 6 p.m. as freshman guard Michael Devoe – the most highly-acclaimed recruit Tech has landed since hiring Pastner in the spring of 2016 – is a longshot to play.

It’s an exhibition game, so Devoe has more time to recover from his toe injury before the Nov. 9 season opener against Lamar, and Pastner is not waiting.

“We’ve been working on a lot of time and score situations, to make sure we do a better job finishing out games,” the head coach said. “For us to take the next step, we need to be able to win on the road and some of these ACC games are decided by four to six points.”

Pastner is right about that.

The Jackets were 1-12 away from home last season, and 12-7 in McCamish Pavilion.

Part of that was attributable to a friendly home schedule, which Tech hopes to replicate in the first five contests with home games against Lamar, East Carolina, Texas-Rio Grande Valley and Prairie View A&M wrapped around a trip to Tennessee on Nov. 13.

Devoe figures to be involved in most of those games, but, “He’s not going to be really ready for Florida Tech because he hasn’t done any conditioning,” Pastner said. “I’m hoping by Lamar, our first game, he’s somewhat back, but we don’t know. It might be another game or two before he’s back in full swing because he’s got to get his conditioning back.”

Pastner has a better feel for the rest of the roster. Here are his thoughts on scholarship players, including redshirt transfer James Banks, who won’t be eligible to play until next season. 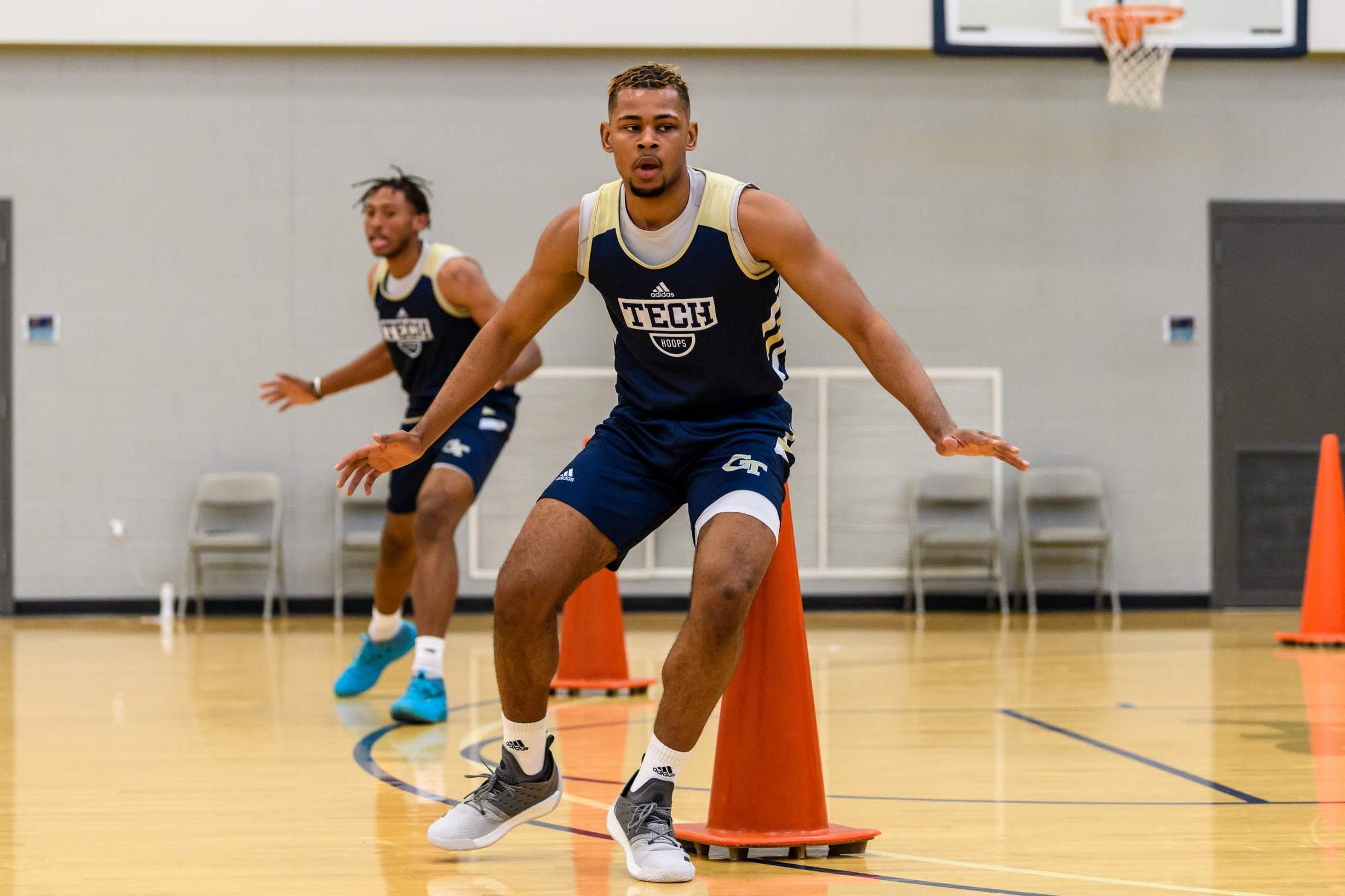 “Brandon’s better today than he was last year, there’s no question. He’s making a higher clip of shots, and he’s doing a better job of finishing around the hoop. He’s using his body to finish around the hoop,” Pastner said. “We need him to be a great 3-point shooter for us. He’s put in the time and effort; he’s just got to get it done.”

“I really think Jose has really matured. You can tell his maturation, especially on the defensive end. He’s playing really well in practice. He’s fully healthy,” Pastner said. “I think he’s going to have a good year. I really think when he’s a junior and Michael Devoe is a sophomore, we’ll have one of the best backcourts in the ACC.”

“I like how he’s playing. He’s an energy guy. When he plays with great energy, he’s a really good player,” Pastner said. “It’s all about the way he cuts. He’s worked hard on his shooting too, and he’s shot the ball better. He’s got to live and die by his energy, and how hard he cuts, the speed of his cuts.”

“I think he’s one of the few guys in the country who can score at the block because he can score with his right or left hand as a skill shot, like a jump-hook. He’s just got to stay out of foul trouble,” Pastner said. “With the new rules, the focus is you’ve got to have palms to the ball.

“You can’t ever show the back of your [hands]. Otherwise, it’s going to be an automatic foul if you’re in post play. His key is being able to stay on the floor by still defending at a high level but defending without fouling, sort of what Ben did.”

“He’s doing well. He needs to gain experience. His next thing is being consistent, because when he’s really good, he’s really good, and when he’s not, he’s not as good. It’s just being more consistent, “Pastner said. “And he’s a motor guy. He’s got great instincts off the ball defensively, as far as being in the passing lanes, but it’s just him playing with that motor every time he steps on the floor.”

“Sylvester is one of our best shooters,” Pastner said. “He had an injury in the month of September, so he’s getting back into the flow of things, but he’s really a good shooter.”

“He was great last year on scout team. He can really defend, and is a high-clip shooter,” Pastner said. “He’s just got to do it under the lights. He hasn’t played in over a year obviously because of the transfer situation.”

“He can really shoot the ball. It’s just an adjustment, understanding the speed of the game, especially on the defensive end,” Pastner said. “He’s going to be a really good player for us; it’s just going to take time.”

“I think he’s going to be better than people rated him based on recruiting rankings,” Pastner said. “There’s going to be some highs and lows with him just because he’s a freshman, and understanding the speed of the game and what he’s got to do. Just keep things simple and sound.”

“James is a big part for us, and we’re counting on him. He’s a vocal, high-energy guy, runs the floor. He’s a big guy,” Pastner said. “He’s got to keep getting better on his ball skills, but he’s going to be a big part, and I think he’s got a chance to be a really good player for us long term.”

“The only guy (among Tech’s non-scholarship players) would be Avi because he’s a big man, and he plays inside. He played on the Japanese senior national team this year,” Pastner said. “He’s gotten better. He is a very, very good passer for his position, but if he plays it would be spot minutes.”