Andy Ogletree caught a flight again Thursday afternoon, heading back to the site of his seminal achievement, and he was fairly exhausted because when you win the U.S. Amateur golf championship, you fetch burdens of various sorts.

Officially a senior business major as of Monday, when fall classes began at Tech, Ogletree traveled back to the Pinehurst Golf Club in North Carolina to practice for upcoming Walker Cup competition. It is the same place where last Sunday he rallied remarkably from four holes down to become the third Yellow Jacket to win perhaps golf’s most rigorous competition.

His was a grueling week: 149 holes of competitive golf, the last 113 in head-to-head match-play.

He’ll be more relaxed at Pinehurst this weekend while practicing for the Walker Cup, a semi-annual, Ryder Cup-style team competition between America’s top amateur golfers and those from Great Britain and Ireland combined. That will take place Sept. 7-8.

But he’s tuckered out after a 2&1 win over John Augenstein, a burly Vanderbilt senior who will be one of his Walker Cup teammates.

“I’ve had about 10 minutes to myself (in three days),” he said Wednesday afternoon. “I’ve been pulled in a lot of different directions. It comes with it, but I wouldn’t trade it for sure . . . a lot of interviews, a lot of media stuff, and trying to go to class, workouts, and trying to get some practice in, too, because it’s not really slowing down golf-wise.”

Ogletree is now the third Georgia Tech golfer to win the U.S. Amateur along with Bobby Jones (who won five between 1924-‘30, all after graduating) and Matt Kuchar (who won in 1997 as a rising sophomore).

The gauntlet starts on a Monday with 312 golfers from around the world. After two days of stroke play, 18 holes time, the field is whittled to 64. From there, it’s match play for five days as the field is trimmed to two, with two matches on Thursday, and a 36-hole final on Sunday.

Ogletree had to go overtime in his Thursday morning match, winning on the 19th hole, and now he’s back where it all happened, where he trailed by four holes after five last Sunday. 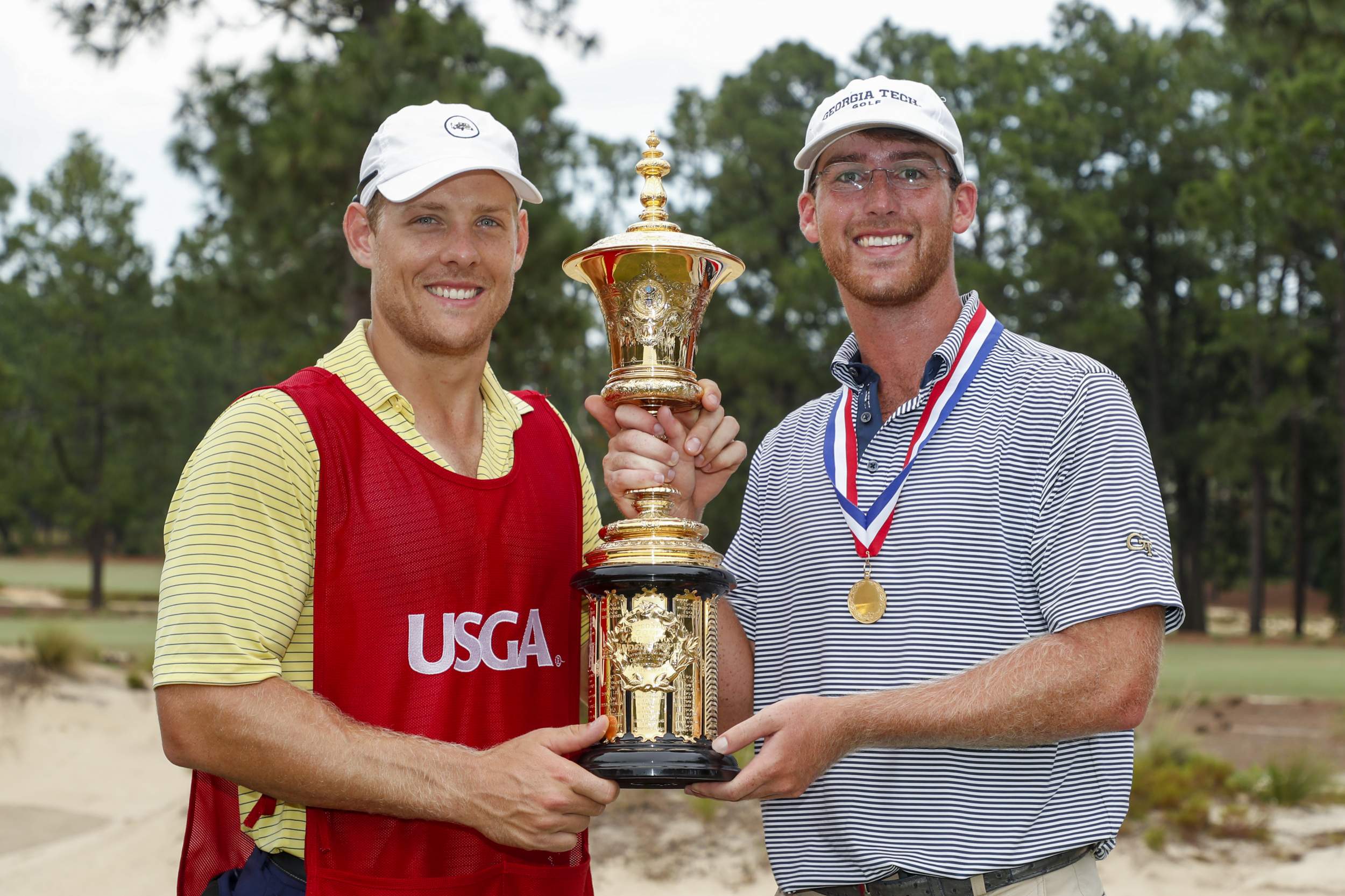 He’ll be at Pinehurst until this Sunday evening preparing for the Walker Cup, a semi-annual, Ryder Cup-style team competition between America’s top amateur golfers and those from Great Britain and Ireland.

In a way, he’ll return to Tech-connected history.

The Walker Cup will be staged at the Royal Liverpool Golf Club in Hoylake, England, where the first one was staged in 1921 and Jones was on the winning American side, and where Jones won the British Open in 1930 on his way to becoming the only man to ever win golf’s Grand Slam in the same calendar year. At the time, the Grand Slam was considered the U.S. and British Opens and the U.S. and British Amateurs).

That’s a lot of history, a lot of weight.

It was probably a good thing that former Georgia Tech pitcher Devin Stanton was working as Ogletree’s caddy.

After pitching for the Jackets from 2011-‘15, Stanton became an athletic trainer, and eventually caddied in golf’s minor leagues for some of his clients, like former Tech golfers Anders Albertston and Vince Whaley.

Recently hired as Tech’s assistant golf coach, he worked Ogletree’s bag at the U.S. Amateur. Head coach Bruce Heppler was there all week as well, along with senior Luke Schniederjans and junior Noah Norton.

Stanton’s job: tote clubs, offer reassurance and keep an eye on the dude who was so locked in on Sunday while walking 35 holes that he looked like he knew nothing else.

“I was making sure that he was eating and drinking. I packed the bag with snacks,” Stanton said. “Once he gets in the zone, he’ll forget to eat and drink. I would throw him his water bottle after every tee shot.”

At the turn of rounds in the final, Ogletree closed his deficit to two with a birdie on No 18 on Pinehurst No. 4.

“He snagged that putt on 18, which kind of flipped momentum a little bit I feel like, and then you have the two‑hour break (before the afternoon round),” Augenstein told reporters. “I think that’s an under-rated turning point of the day was him making that putt on 18 and then coming out and birdieing the first hole (on the second round), as well.” 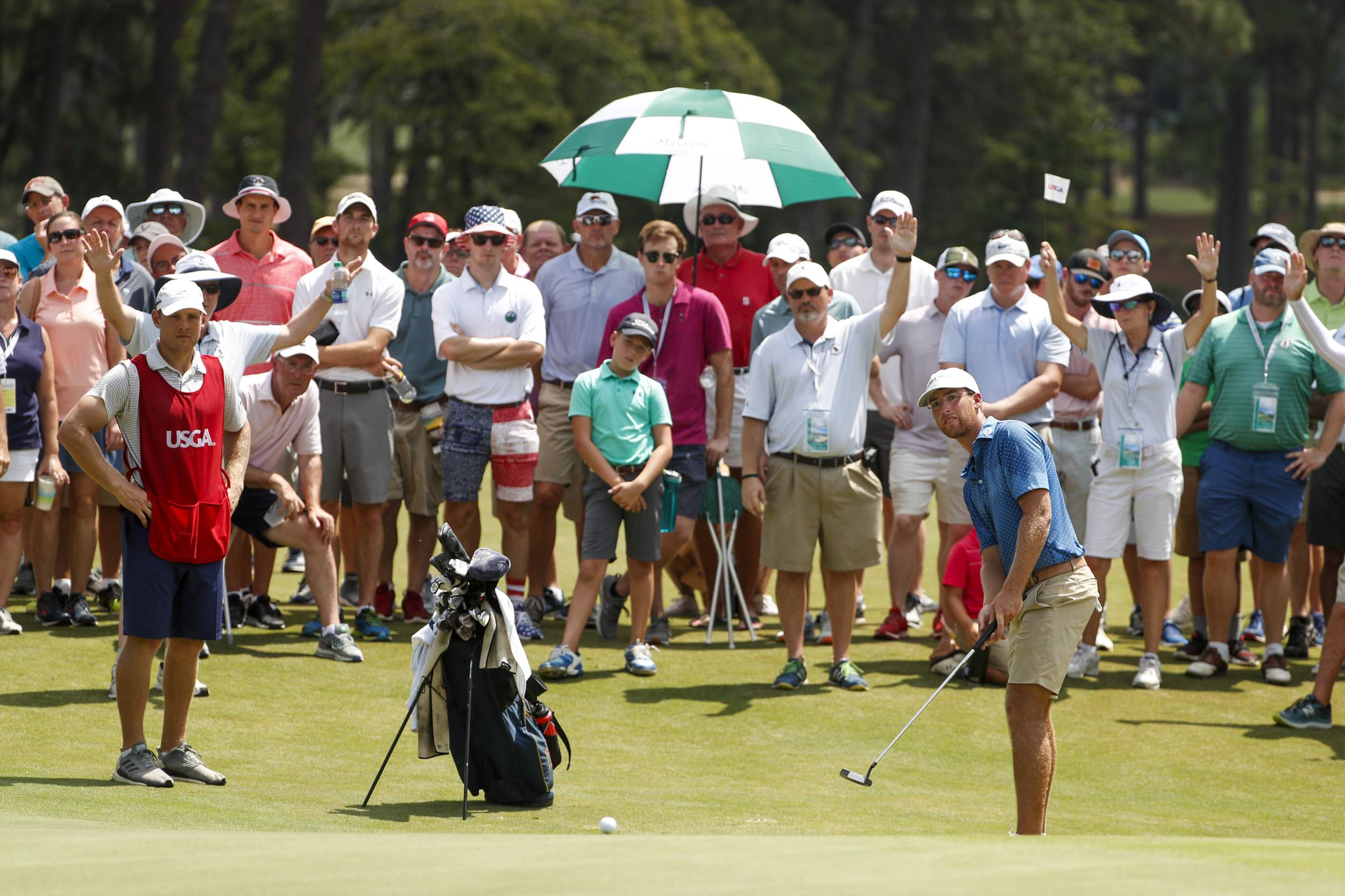 At the turn of rounds in the final, Ogletree closed his deficit to two with a birdie on No 18 on Pinehurst No. 4.

Ogletree indeed cut the gap to one with a birdie on No. 1 to start Sunday’s second round.

Augenstein twice more pushed his lead to two, and then Ogletree won four of the last seven holes played – once with a birdie at No. 13 and three times with par. He just kept grinding.

And, he didn’t attack. The greens at Pinehurst No. 2 are too fast for that. Andy played the course rather than his opponent.

“Most courses you would pay a lot of attention to what (the opponent) is doing because most courses are fire at the pin and make as many birdies as you can, but not Pinehurst because the greens are pretty severe,” Ogletree said. “You have to play conservative even if you’re behind. You can’t be super aggressive … it can roll 20 feet past.”

It came down to the last couple holes of a long week, perhaps with Heppler’s advice winning over.

On No. 16, Ogletree found himself in a green-side sand bunker while one-up.

That took him back to last fall, when he had a chat between semesters with his head coach. The coach basically said, “You’re good enough off the tee and with your long irons to play on the PGA Tour, but you’ve got to work on your short game.”

Ogletree did. Over and over at the Noonan practice facility he worked with the short sticks in bunkers and fringes.

And it’s helped. He finished one stroke out of the lead at the ACC Championship in April and won the Monroe Invitational earlier this summer.

Ogletree punched that sand shot on 16 to about eight feet, and drained the putt to halve the hole. He played down the stretch like an emotionless machine.

“That’s kind of the deciding factor in our match coming down the stretch was he made a lot of those nice seven‑, eight‑footers, and I didn’t,” Augenstein said. “But he just ‑‑ he played really, really well, and I was very impressed with how he putted.“

The win came on No. 17, where Ogletree hit his tee shot on the par 3 hole to about 12 feet, and Augenstein landed on the left fringe perhaps 20 feet away.

Augenstein blasted with his putter well past the hole. Andy then putted about 30 inches past on the high side. Then, again, Augenstein putted far beyond the hole and conceded the championship to Ogletree by pointing a finger to him that said, “you’re the man.” 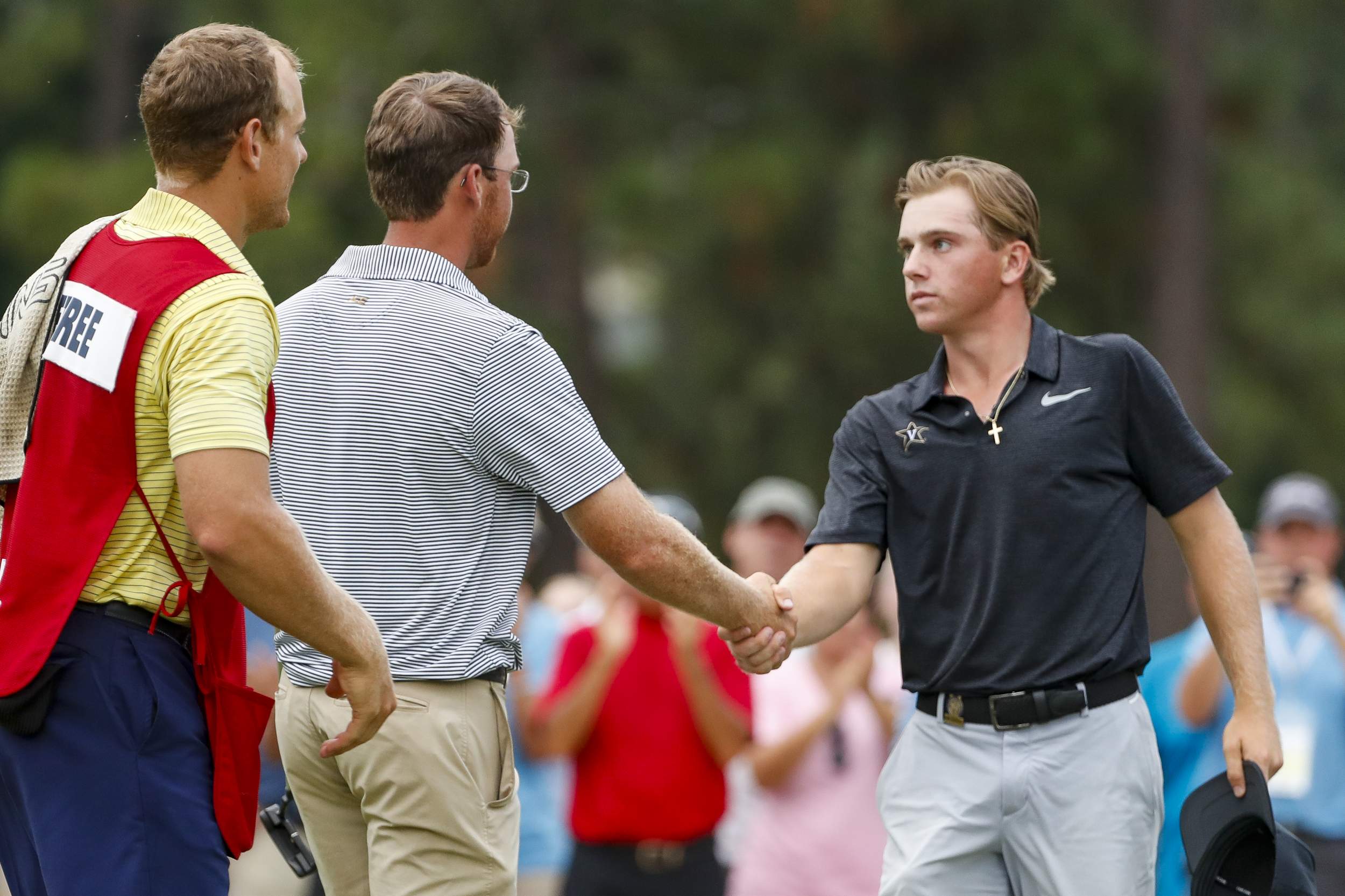 Augenstein putted far beyond the hole and conceded the championship to Ogletree by pointing a finger to him that said, “you’re the man.”

Ogletree kept the pressure on with consistency. He had seen Augenstein before, probably in “25 to 30 tournaments” in junior golf and college competitions. Sunday, though, was the first time he played aside the sturdily-built competitor.

“He definitely got frustrated with himself,” he said. “That’s just the kind of player he is. He’s tough, he’s gritty and I think that’s always how he’s playing. I think he probably intimidates a lot of guys, but I don’t really pay any attention to that stuff. It really didn’t bother me. I’ve always been super even-keel, and I think that really helped me in the match.”

After shaking Augenstein’s hand, Ogletree hugged his parents, who traveled from teeny-tiny Little Rock, Miss., and then his coach and his caddy. It was a big moment for many.

“Ah, man, I was trying to hold back tears, to be honest,” Stanton said. “I was just so happy for him. It was a mix of emotions just to be right there and play a small part in it. It sounds cliché, but it was life-changing for him. For me, not so much. I told him this is about you. This is your tournament to win.”