The timing has changed over the years and so have the faces and even the tournament’s name, yet the Golf Club of Georgia Collegiate Invitational remains one of the sport’s top events, and it will be in the same place as always when Georgia Tech plays host for the 13th time.

When the No. 3-ranked Yellow Jackets tee it up with 13 other squads Friday through Sunday at Alpharetta’s Golf Club of Georgia, the goal will be unchanged: to measure up against heavyweights.

Tech has won or tied for the title in all three fall events to date, and head coach and tournament organizer Bruce Heppler is aiming to close out the fall schedule with another championship in the 13th annual event.

The Jackets will square off against No. 2 Duke, No. 5 Alabama, No. 9 Texas A&M, No. 10 Southern California and No. 11 Wake Forest plus NCAA tournament teams UCLA, Stanford, Florida State and Virginia among others in search of serious tests.

Players likewise are embracing the challenges ahead.

“I think they want to win the tournament, and you can do two things when you have a home tournament: you can try to make sure you win it with who you invite, or you can make it where it really means something if you do win it,” Heppler explained. “We’ve tried to go with that. We want to show [college golf] what our guys use every day.”

Well, maybe not every day.

The Jackets split their practice time three ways between the Noonan Practice Facility just off campus, East Lake Golf Club and the Golf Club of Georgia.

One thing is certain: they love the Golf Club’s Lakeside and Creekside courses, which both play to par 72. Tech won titles in 2010 and ’12.

Preparing to play this tournament – which before 2016 was known as the United States Collegiate Championship at the Golf Club of Georgia – for the fourth and final time, fifth-year senior James Clark is pretty jazzed up.

There’s so much to enjoy about Tech’s only true “home” tournament of the school year.

“It’s a different feel, a different vibe, and I think it’s a good thing because you get excited about it … when you come home, it kind of ups the ante,” Clark said. “I’m pretty sure my parents are going to come up and watch. I’m not sure if my brother will make it. He goes to school at Auburn.

“We’ve tried to do some recruiting on campus, going around and say, ‘Hey, come to the tournament, come support, come watch,’ and there might be a couple friends from back home in Columbus who’ve said they might watch.”

When Heppler set up the tournament in 2005, there were differences. For starters, the first four times it was staged in the spring from 2006-’09 before moving to the fall in 2010.

“Initially, it was in the spring and we wanted to have a small, little warm-up before we went to ACCs with fast greens and good conditions,” coach said. “And Jeff Paton, who was the director of golf at the time, said, ‘No, we’re not going to have some small, little tournament,’ and he blew it out with grandstands and caddies and bibs. It became pretty extravagant.”

From the jump forward, one thing beyond tournament location has not changed: the fields have always been stacked with talented squads from near and far.

“We’ve been able to maintain a national field,” Heppler said. “We’ve tried to get teams from California to come. Stanford UCLA, USC have been here regularly. It’s hard for those guys to come east more than once or twice a year. It’s certainly one of the four or five best in college each year.”

It seems plausible that the depth of the field might leave an edgy atmosphere for the Jackets. Nobody wasn’t to lose at home, after all.

Clark’s not so sure about that. He tied for 25th in this event as a freshman while playing as an individual, tied for 36th as a sophomore and then tied for 29th as a junior. “I really enjoy playing the Lakeside course. I’ve had some my lowest rounds there,” he said.

“I think pressure is what you make it. Pressure is only pressure if you respond to it and put it on yourself. But it can be taken that way. That extra feeling you have if taken the right way is kind of more excitement. This is it: we’re playing in front of the home crowd, this is our home course and you have all these advantages.”

The tournament swung from spring to fall for scheduling reasons at the Golf Club.

“They decided it was the week before the Masters and it was hard for them to be closed when people like to have their friends come in, play the Golf Club, and then go watch the tournament [in Augusta],” Heppler said.

“So, they asked if we could move it to the fall, and it’s remained a really good tournament. I think a lot of that has to do with the competition is so good, the course is great and Atlanta is easy to get to.”

It will be easier for more Tech players to play in addition to the five whose scores will count toward team totals – Clark, juniors Luke Schniederjans, Andy Ogletree and Tyler Strafaci and sophomore Noah Norton. Heppler said that every Jacket who wants to play other than those who are injured or redshirting, will have the option. That includes junior Anton Serafini, who will make his collegiate debut as an individual. “He’s finally got his health back,” Heppler said.

Visiting teams find simplicity upon arrival. Most teams – including Tech – lodge at a hotel along Alpharetta’s Windward Parkway one mile or less from the Golf Club, and there are multiple dining options in the area as well.

There will be a similar convenience for Tech student-athletes, who left campus Wednesday for the tournament site.

“There is a benefit and we might even drive our own cars up there,” Clark said. “If somebody has a lab or a test on Thursday [during practice rounds], it’s easy for us to shoot down to campus if we have something we need to do.” 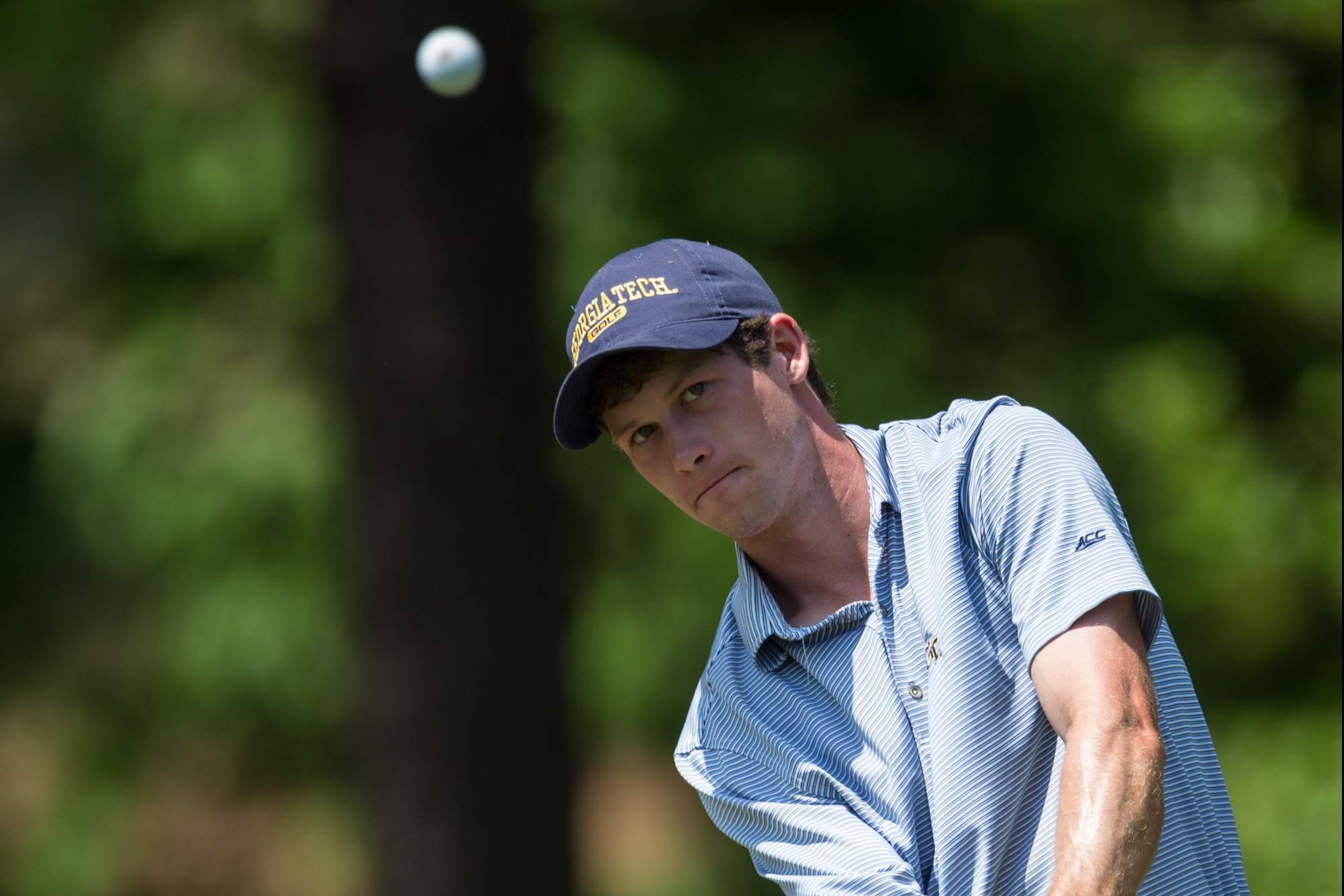 James Clark tied for 25th in the Golf Club of Georgia Collegiate as a freshman while playing as an individual, tied for 36th as a sophomore and then tied for 29th as a junior.

This is not easier for Heppler nor assistant coach Drew McGee.

Tech is also the host for the season-opening Carpet Capital Collegiate at The Farm in Rocky Face, Ga., near Dalton, but course and tournament officials there do most of the legwork to make that happen.

“This one here we’ve got to get the hotel arrangements made, get food [at the course], get the rules officials … really, there’s a lot going on. We’ll go 50 [percent] with me and 50 with Drew,” the coach said. “We don’t have operations people. I could probably ask, but I don’t. Sometimes, it’s a home football weekend, and we’re understaffed anyway.”

In collaboration with GCoG executive director Jacqueline Welch and club staffers, Heppler and Tech keep pulling off this great tournament.

“I’m busier, but it’s also a home course so there’s less coaching,” Heppler said. “The only real negative is I think sometimes they try too hard.”