James Clark is back, not that he went anywhere, and that may help Georgia Tech go further than ever.

When we last saw the young man from Columbus, he was a three-year starter for one of the best college golf programs in the nation and preparing to help the No. 7-ranked Yellow Jackets chase more titles.

Then, he decided not to play in 2017-18. A business administration major, Clark made an engineering decision, and redshirted.

And Tech won its 17th ACC championship and three other tournaments anyway.

So, when the Jackets tee off Friday morning in the Carpet Capital Collegiate near Dalton with four of five starters back plus a new old guy who made the travel squad for all but three events in his first three seasons with Tech (all freshman year), they expect to be very good again.

And Clark thinks he’ll be better than he was after taking a year to re-tool his game.

“I think the sky’s the limit with this team,” he said Tuesday. “We basically have the same starting guys, at least the core of the team. If you look at the postseason starting team we lost one senior (Chris Petefish), and you throw myself back in the lineup, I have quite a bit of experience …”

He also has a new swing, at least off the tee, and an adjusted mindset.

Truth be told, Clark’s decision to go on a working sabbatical of sorts was layered and connected to the teammates he’ll join at The Farm Golf Club in Rocky Face, Ga.

Juniors Andy Ogletree, Luke Schniederjans and Tyler Strafaci and sophomore Noah Norton return from strong seasons. Their presence going into last season, plus that of now-graduated golfers Petefish, Jacob Joiner, Tyler Joiner and Michael Pisciotta, made it clear that he was going to have to compete like mad to make travel squads.

Plus, beyond the short term there is the long term. Clark wants to play professional golf, and figured that to he needed to work on his game – particularly off the tee – to stop pulling his drives and pull that off.

“I wasn’t expected to redshirt at all. I took a look at my swing and my game, and I realized that if I ever wanted to take it to the next level, I needed to get my swing technically better where it would be more consistent,” Clark said.

“During those first three years, you get into sort of a playing mode where you just worry about where the ball is going; you don’t worry about the technique of the swing.” 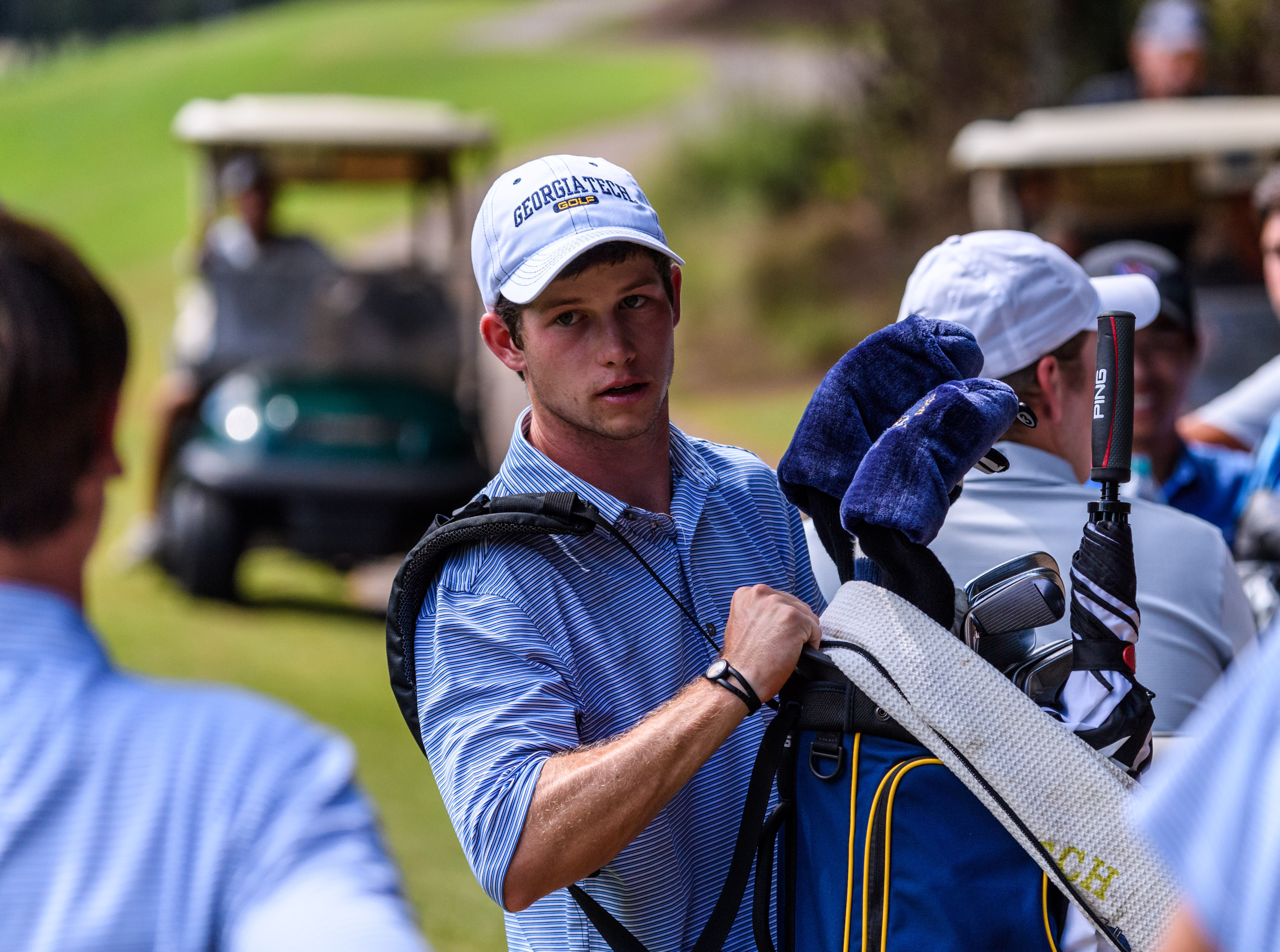 Clark worried about his drive.

He’s not a big guy, going about 5-feet-9 and 133 pounds, so he went overboard trying to add length off the tee. He succeeded to a significant degree, adding some 30-40 yards in his time at Tech, but that extra juice came at a cost.

“I’ve always been kind of a smaller-frame guy and never really got a ton out of it, so I started to get a really strong grip and hitting kind of a power draw, and it was hard to control,” he explained. “I needed to be consistent if I wanted to play on Tour. Then, it lined up for me to do it with the makeup of our team.

“We had four guys leaving [in 2018], so if I was the fifth guy to leave that’s kind of a big hit to the team. If I could stay back for another year, we’d be deeper and better for another year.”

So, Clark exempted himself from competition last fall, played some amateur tournaments over Christmas break, and a few more in the spring and summer.

The goal has been to keep the power swing and straighten it out.

Clark drove back to Columbus Tuesday, in fact, for another lesson.

“The main solution is trying to stabilize the club face at impact, because before, I had a lot of face rotation, and that was the cause of a lot of inconsistency,” he said. “If I could get the face to be square longer, that’s going to allow me to hit the ball more clean and straighter.

“I’ve worked with Mark ever since I was probably eight years old. He’s the only swing coach I’ve ever worked with, and we mix well.”

There’s more to this than tweaking swing mechanics. Clark played helicopter golf fan last year, studying his teammates and other players and the way they approach the game.

You could say that he’s overhauled his engine through work, and changed his playing style through observation.

“Definitely, definitely. I went and watched the team at the ACC Championship, and also just stepped back and watch everybody,” he said. “I’ve always been a kind of high-strung competitor type, and I sometimes run pretty hot. It’s something I’ve had to work pretty hard on to stay calm and stay in that right mindset.

“I’ve noticed I’ve been able to manage the mental side of golf really well, a whole lot better than I used to. One of my goals going forward is to enjoy every round because I think the happiest golfers tend to play the best.”

Clark is happier now than ever, better pacing himself on the course and off.

“I’ll graduate next spring. It was more of a long-term decision for golf, and it also helped me lighten up the school work,” he said. “I’ve sort of settled into a groove, and it’s starting to feel more natural with this new swing.

“I got to see what it was like from the outside looking in, how people act when they play, and what’s really important. The team chemistry is awesome this year. It has such a different feel from the teams that I’ve been on in the past. Everybody has sort of settled in well, and we all pull for each other and we’re trying to bring the best out in everybody.”