Westlake Village, Calif. – In weather conditions that sent scores soaring across the board, Connor Howe and Luka Karaulic each shot 75 to lead No. 20 Georgia Tech Wednesday, and Will Dickson earned his second top-15 finish in a row as the Yellow Jackets finished seventh at the Southwestern Invitational.

On a cloudy day with temperatures in the low 50s, winds of 20 miles per hour and minimal rain at North Ranch Country Club, the Yellow Jackets posted a 17-over-par score of 305 Tuesday. Tech finished seventh in a field loaded with some of the nation’s top programs with a 38-over-par total of 902. The 11 of the 12 teams posted scores in double digits in relation to par Tuesday on the 6,992-yard, par-72 layout. The team that didn’t, San Diego State with a 5-over-par 293, rallied to win the team title.

TECH LINEUP – Karaulic, a sophomore from Dacula, Ga., and Howe, a junior from Ogden, Utah, both endured see-saw rounds with multiple birdies but also a couple of “other” scores. Each player had four birdies on his card en route to their team-low 75s, and tied for 34th place in the end with 12-over-par scores of 228.

Senior Noah Norton (Chico, Calif.) provided the Yellow Jackets’ fourth counting score with a 79 Tuesday, and tied for 59th place at 237 (+21). Freshman Christo Lamprecht (George, South Africa), bidding for a top-20 finish in his collegiate debut after 36 holes, struggled to an 80 Tuesday and tied for 32nd place at 227 (+11). 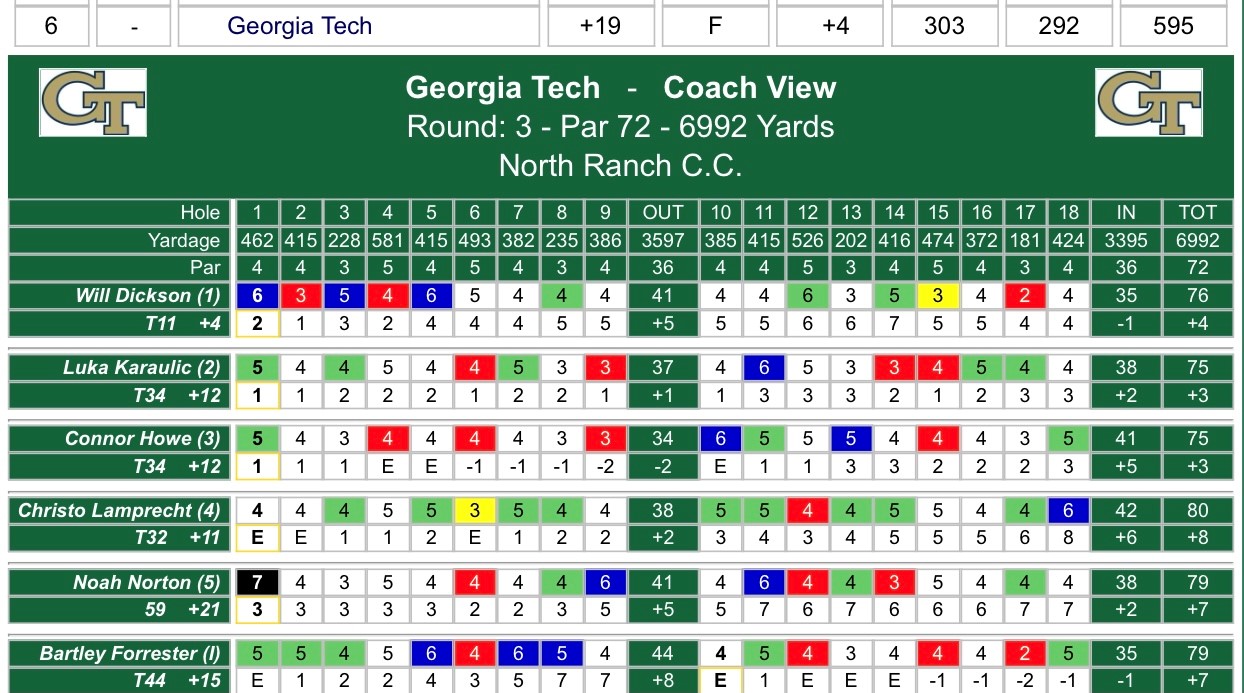 TEAM LEADERBOARD – An 10-stroke turnaround flipped the top two teams on the leaderboard in the final round as San Diego State came from seven strokes back to win by three. The Aztecs shot 5-over-par 293 Tuesday, while the Sun Devils posted a 15-over-par 303 (same as Georgia Tech). San Diego State finished 54 holes with a 10-over-par total of 874, while ASU finished at 877 (+13).

INDIVIDUAL LEADERBOARD – Arizona State couldn’t hold on to win the team title, but the Sun Devils’ David Puig kept the hammer down in the individual race, firing a 2-under-par 70 Tuesday to win medalist honors by nine strokes. Puig posted a 10-under-par total of 206 to outdistance Pepperdine’s Joshua McCarthy (215, -1), who was competing as an individual. They were the only players to finish 54 holes under par.

"The day was a whole lot better than we expected, it was windy but the rain never came. We made the turn in 5-over which was phenomenal, and we had the back nine downwind, but we let it get away from us. Luka fought hard all three days, and I’m really pleased with what he’s doing. Will had a rough start, but he fought and went 1-under on the back. This was a strong field, the green complexes were severe and there were a lot of tough pin placements, so it hasn’t been easy. All in all, not a bad tournament."