Tech Rallies to Finish 9th at The Goodwin

Stanford, Calif. – Freshman Christo Lamprecht fired a 5-under-par 65 Saturday, while Noah Norton and Bartley Forrester each shot 1-under-par 69, rallying Georgia Tech to a 7-under-par round of 273 and a ninth-place finish at The Goodwin at the Stanford Golf Course. The Yellow Jackets posted their best round of the weekend and the second-lowest round of the day, leaping nine spots against the field.

TECH LINEUP – In posting the low round by a Yellow Jacket player in 2020-21, Lamprecht eagled the opening par-5 first, the par-5 7th and the par-5 15th holes, adding a pair of birdies at 16 and 17 in fashioning his 65. The freshman from George, South Africa finished 54 holes with a 5-over-par total of 215 to tie for 43rd place individually.

Forrester (Gainesville, Ga.) and Norton (Chico, Calif.) each birdied five holes to shoot 69 in the final round, while junior Connor Howe (Ogden, Utah) eagled No. 1 and added a pair of birdies to supply the Yellow Jackets’ fourth counting score, an even-par 70, on Saturday.

Howe and Forrester finished the tournament tied for 39th place at 214 (+4), while Lamprecht and Norton tied for 43rd place at 215 (+5). Luka Karaulic (Dacula, Ga.) didn’t count for Tech Saturday after carding a 72, but birdied four holes and finished tied for 97th place in the 146-player field.

Tech totaled 17 birdies Saturday, and the Yellow Jackets’ five eagles in the round were more than any team for the entire tournament. 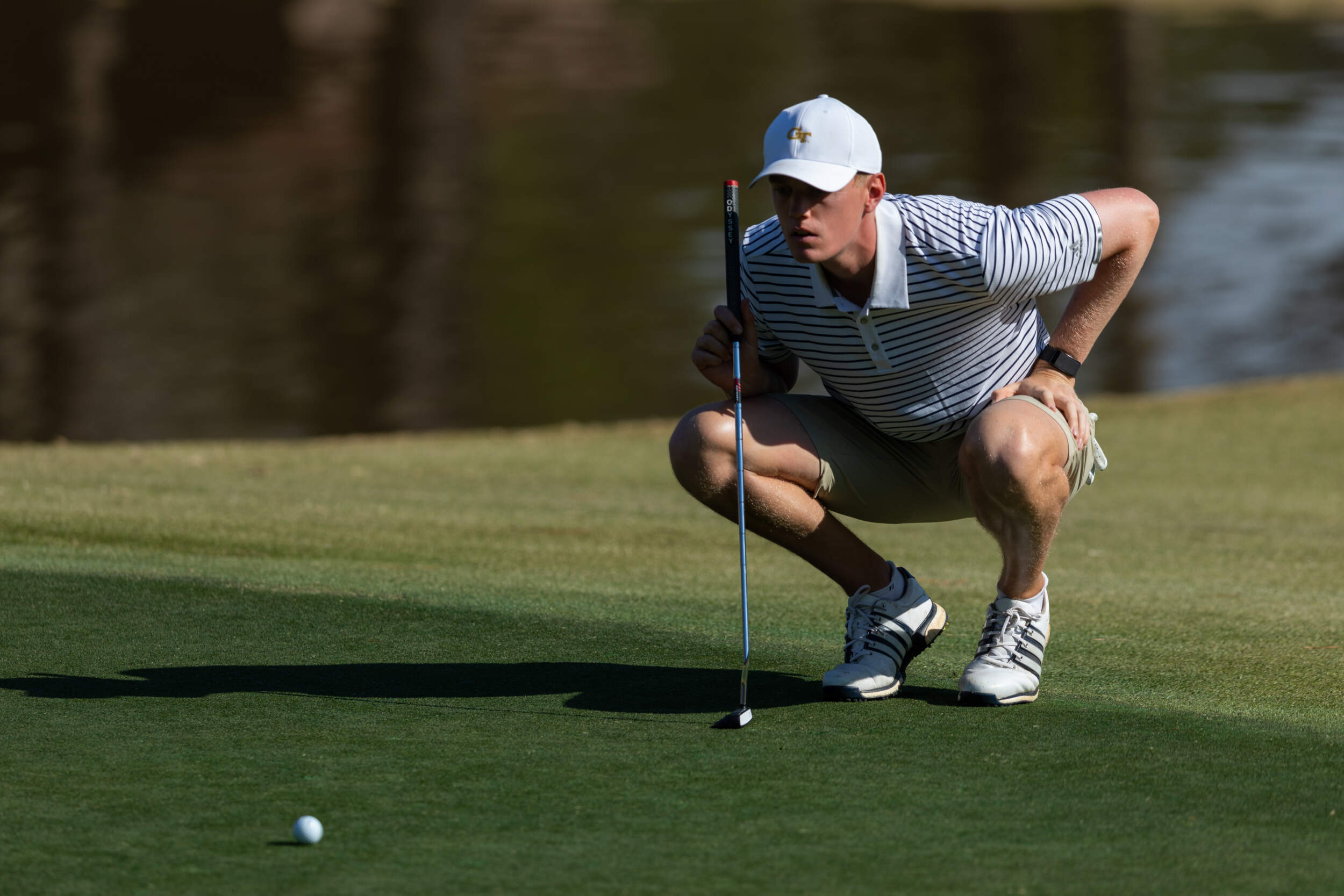 Bartley Forrester closed with rounds of 71-69 to tie for 39th place. (photo by Clyde Click)

TEAM LEADERBOARD – Eighth-ranked Arizona State, with three players finishing among the top 10 individuals, cruised to the team title by posting a 6-under-par 276 score Saturday and completed 54 holes at 15-under-par 825. The Sun Devils won by eight strokes over host Stanford, which closed with a 3-uner-par 277 and finished the tournament at 7-under-par 833.

INDIVIDUAL LEADERBOARD – Sam Harned from Nevada fired a 2-under-par 67 Saturday, while 36-hole leader Blake Hathcoat of Saint Mary’s closed with a 68, and the two players finished the tournament as co-medalists at 10-under-par 200. Oregon’s Tom Gueant, who shot 8-undr-par 62 Saturday, finished a stroke behind in third place at 9-under-par 201.

Kaito Onishi of Southern California and Noah Goodwin of SMU tied for fourth place at 7-under-par 203, while Pepperdine’s Joe Highsmith finished alone in sixth place at 6-under-par 204. Arizona State teammates Ryggs Johnston and Chun An Yu tied for seventh at 205 (-5), while Washington’s Henry Lee and Santa Clara’s Matt McCarty rounded out the top 10 at 207 (-3).

Nineteen players in the 146-player field finished the tournament under par.

"It was an encouraging finish for our guys today, four really good rounds. We had chances to finish even better, but it’s nice to know we have that kind of a round in us. I’m not sure we’ve ever had a player get three eagles in a round, and Christo came close to getting a fourth. We’re looking forward to building on this."

TOURNAMENT INFORMATION – This was Georgia Tech’s first appearance at The Goodwin, named for legendary Cardinal head coach and the second time Yellow Jackets have played an event at the Stanford Golf Course (6,732 yards, par 70), having competed in an NCAA regional tournament there in 2017. The format was 54 holes, 18 each day beginning at 7 a.m. Pacific time from both the first and 10th tees, with the low four individual scores of five each day counting toward the team total.

The field, larger than usual at 28 teams, includes only two teams from East of the Mississippi River (Tech and Florida Atlantic) and seven teams from outside the Pacific time zone. Host Stanford has won the tournament 16 times since the inaugural event in 1968. Arizona State (No. 5), Pepperdine (No. 15) and SMU (No. 19) are the highest ranked teams in the field, which also includes California, Colorado, Minnesota, Northwestern, Oregon, Southern California, UCLA, Washington and Washington State.