THE FLATS  – Georgia Tech’s golf team, ranked No. 2 in the nation with a pair of stroke-play wins under its belt from the fall, opens the 2019 spring schedule with its annual trip to the Big Island of Hawai’i for the Amer Ari Intercollegiate at the Waikoloa Resort.

TEAM UPDATE – The Yellow Jackets stand No. 2 in the nation in the Golfstat rankings and the Bushnell Coaches Poll, and No. 3 in the Golfweek/Sagarin Index entering the spring season. Tech, favored to win the Atlantic Coast Conference once again, won the Maui Jim Intercollegiate and tied for first in the Carpet Capital Collegiate in the fall, and won both of its matches in the Jack Nicklaus Collegiate Invitational before finishing third in its own Golf Club of Georgia Collegiate Invitational.

Tech played a lot of impressive golf in the fall, leading the nation in average score (70.18), first-round scoring average (68.50), scoring on par 4s and par 5s, subpar strokes per round and fewest bogeys per round. The Jackets average drop score over six rounds is 74.39, best in the nation. Tech piled up 215 birdies in its nine stroke play rounds, which only ranks No. 60 because most teams ahead of it played four stroke-play events, rather than the three the Jackets played.

All five Yellow Jackets playing this week are ranked No. 138 or higher in the Golfstat rankings, while three of them – Junior Luke Schniederjans (No. 8), junior Tyler Strafaci (23) and sophomore Noah Norton (32) are listed among the top 40. Junjor Andy Ogletree is No. 134, and senior James Clark is No. 138. The five are ranked similarly in the Golfweek/Sagarin ratings, although Ogletree is significantly higher at No. 74. 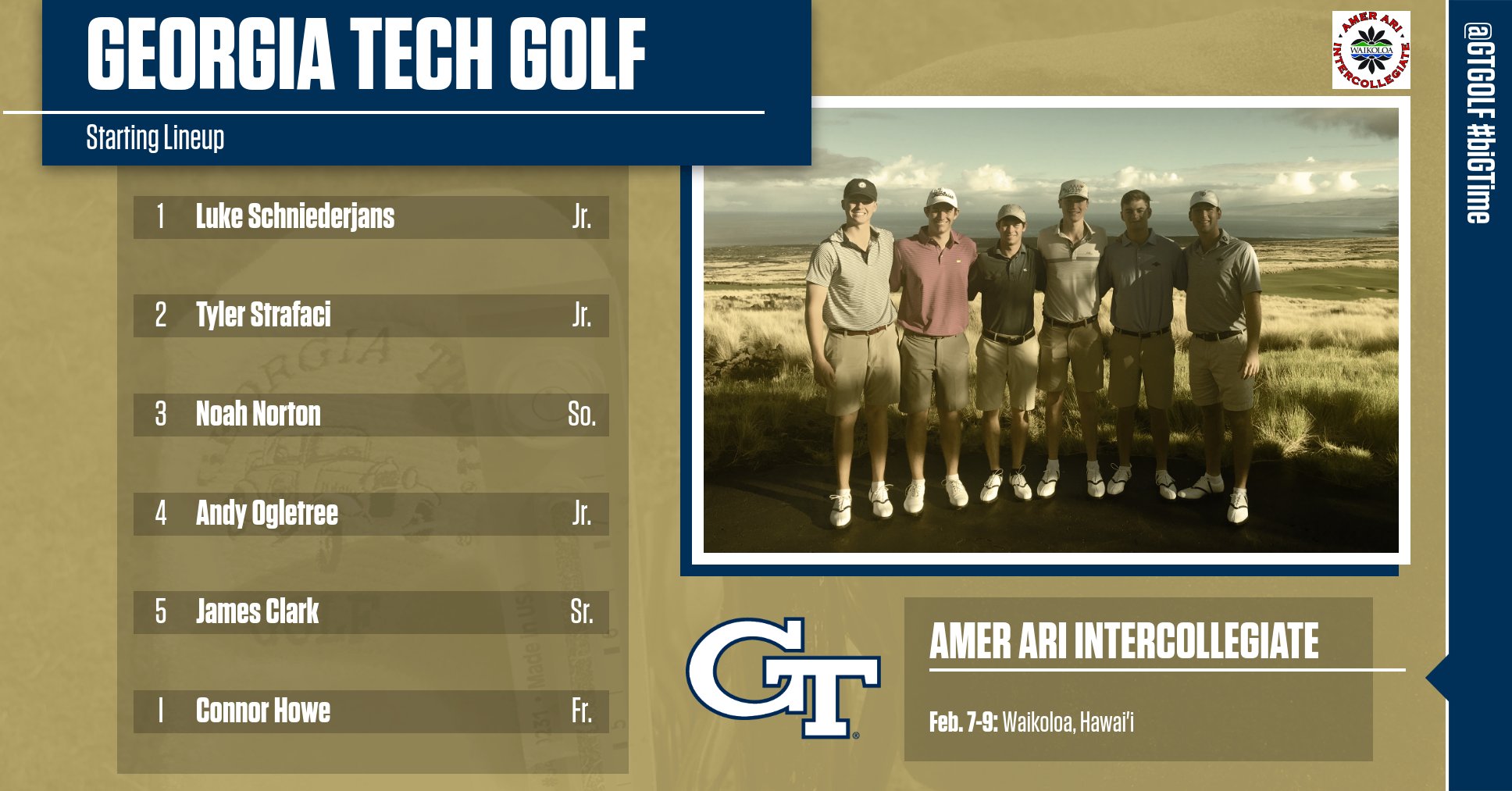 TECH LINEUP – Schniederjans (Powder Springs, Ga.), Strafaci (Davie, Fla.), Ogletree (Little Rock, Miss.), Norton (Chico, Calif.) and Clark (Columbus, Ga.) are in the lineup for the Amer Ari Invitational, each having played in all four events in the fall. Freshman Connor Howe (Ogden, Utah) is competing as an individual, playing his fourth event.

Schniederjans finished in the top 10 of all three stroke play events in the fall, and earned an exemption into the Tech lineup this week as a results. Strafaci posted a pair of top-10 finishes in the fall, while Ogletree posted a tie for 16th and 12th, and Clark logged a pair of top-20 showings. Strafaci and Clark each won two matches at the Jack Nicklaus Invitational.

COACH BRUCE HEPPLER SAYS – “One reason we keep going back is just weather. That side of the island gets about three inches of rain every year, so we’ve never had a problem playing the event. It really motivates our guys to work over the break and be ready to come back and qualify. It’s also a great reward for our guys who stay around and work hard. We’re not the only ones who feel that way, because the field is loaded, and it’s a great chance for us to have a measuring stick early in the season.”