Alpharetta, Ga. – Sophomore Noah Norton fired a 7-under-par 65 Friday to take the individual lead, junior Luke Schniederjans carded a 6-under 66, and No. 3 Georgia Tech has a six-shot lead after the opening round of Golf Club of Georgia Collegiate Invitational.

The Yellow Jackets, bidding for their third victory in the 13-year history of the event, posted a tournament-record team score of 270 (18-under-par) Friday, eclipsing the 17-under 271 shot by Tech in the opening round of the 2010 tournament and matched by Wake Forest in the second round of the 2017 event.

TECH LINEUP – Norton, who missed Tech’s last event with a sore back, bettered his previous career-low round by two strokes. The Chico, Calif., sophomore birdied nine holes, starting his round with two consecutive and finishing with three in a row. Schniederjans, the nation’s 20th-ranked player according to Golfstat, matched Norton most of the way around the par-72 Lakeside Course, but bogeyed the final hole, leaving the Powder Springs, Ga., junior in a tie for second place with a 6-under-par 66.

James Clark (Columbus, Ga.), a senior playing in his final Golf Club of Georgia Collegiate, birdied four of his first five holes Friday and had seven altogether along with an eagle at the last against four bogeys to post a 4-under-par 68, his best in 10 career rounds in this event. Junior Tyler Strafaci (Davie, Fla.) had five birdies to finish at 1-under-par 71.

Junior Andy Ogletree (Little Rock, Miss.) did not count Friday after being disqualified after six holes for playing an incorrect ball. His score will count for the Jackets Saturday and Sunday, but he is ineligible for the individual title.

The Yellow Jackets, who ranked No. 2 in the nation in birdies after piling up 148 in its first two stroke-play events this year, racked up another 29 Friday, seven more than Southern Cal’s 22.

Noah Norton fires a career-low 65 Friday in the opening round of the Golf Club of Georgia Collegiate, helping the 3rd-ranked Jackets to a 6-shot lead (270, -18). pic.twitter.com/AIH9x8YzgL

TEAM LEADERBOARD – The Yellow Jackets are six strokes ahead of No. 11 Wake Forest and No. 15 Clemson, who each shot a 12-under-par team total of 276 Friday. The Tigers have four competitors in the top 15 on the individual leaderboard, while the Demon Deacons were led by Eugenio Chacarra with a 66 Friday. No. 10 Southern California is alone in four place after posting a 10-under-par total of 278.

Another group of four players, including Tech’s James Clark, is tied for seventh place at 4-under-par 68. A total of 29 individuals broke par on Friday.

COACH BRUCE HEPPLER SAYS– “That’s the kind of scoring we need to be successful and win tournaments. The guys played really, really well, and they knew they needed to count today. Those two rounds by Noah and Luke were big, and then James hits it to within two feet at 18 to make eagle. He’s had a nice fall so far. We just need to try and keep making [birdies], because there are a lot of them out there. The conditions are ideal, the greens got really good the last two days. You can make putts, and it’s ideal for scoring.”

TOURNAMENT INFORMATION – The Golf Club of Georgia Collegiate, formerly called the United States Collegiate Championship, continues through Sunday at the Golf Club of Georgia, which serves at the Yellow Jackets’ home club. The tournament will be played exclusively on the 7,017-yard, par 72 Lakeside Course. Competition begins at 8:30 a.m. each day. Admission is free. 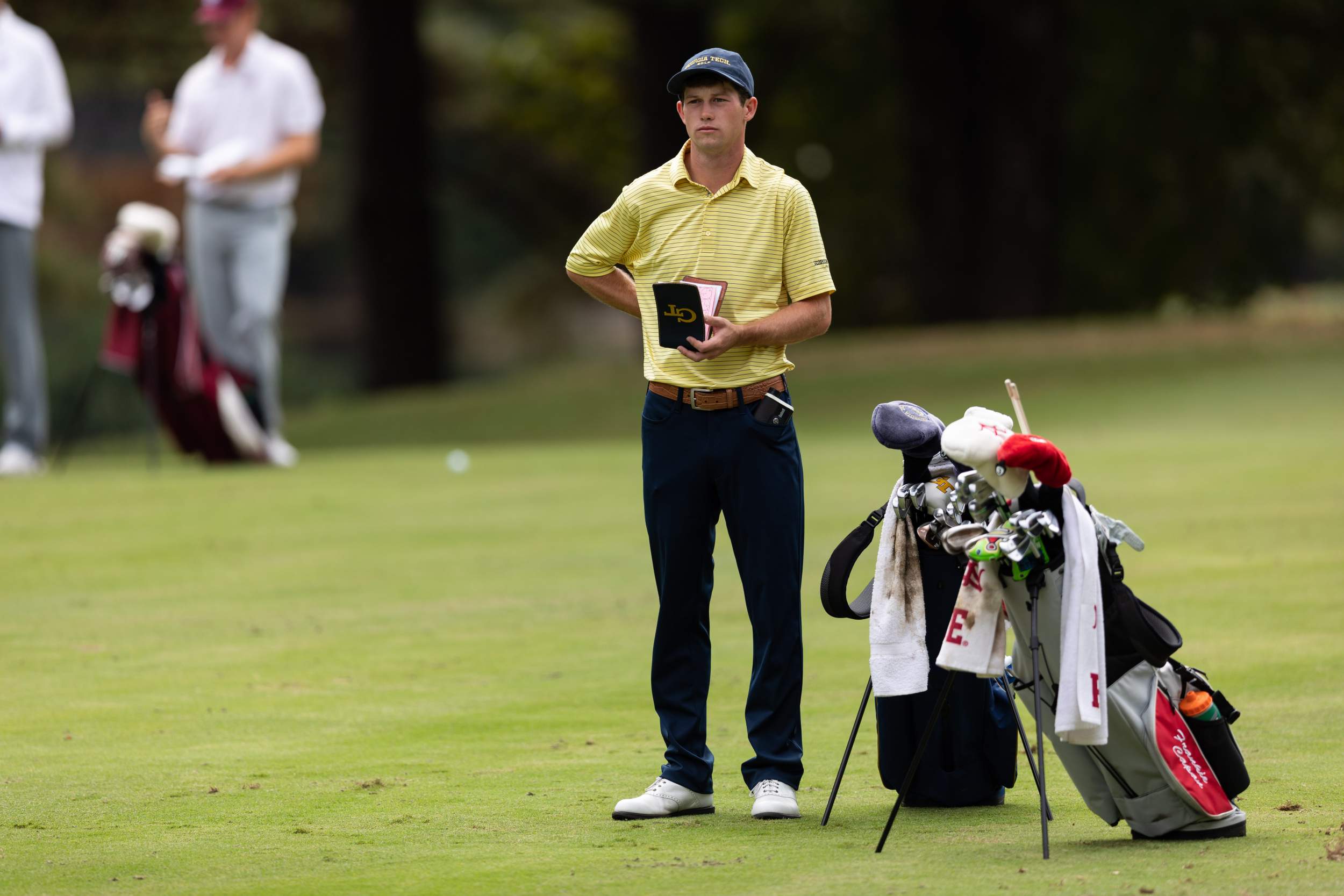 James Clark fired a 4-under-par 68 Friday, his best career round in the Golf Club of Georgia Collegiate.

TECH’S GOLF CLUB OF GEORGIA COLLEGIATE HISTORY – Georgia Tech has won the Golf Club of Georgia Collegiate twice in its history, in 2010 and 2012. James White, who set tournament records for 18-hole score (62) and 54-hole score (204, broken in 2014), won medalist honors in 2010, while Ollie Schniederjans won it in 2013 for Tech’s only individual titles. Clemson, Oklahoma State and Texas also have won twice. The Tigers captured the inaugural title in 2006 and again in 2009, the Longhorns won in 2014 and shared the title with Virginia in 2016, and the Cowboys won in 2013 and again last fall.