Rio Grande, Puerto Rico – Connor Howe (Ogden, Utah) fired his second consecutive 4-under-par 68 to keep a share of the individual lead, leading No. 3 Georgia Tech to a 20-under-par score of 268 Monday and the solo lead after 36 holes at the Puerto Rico Classic. The Yellow Jackets lead No. 2 Oklahoma by one stroke heading into Tuesday’s final round.

TECH LINEUP – Georgia Tech’s 268 surpassed its previous low round of the year, a 19-under-par 269 last week in round 2 of the Amer Ari Invitational, in which the Yellow Jackets also counted four rounds under 70. It matched the fifth-lowest round in program history (a 268 at the Waikoloa Intercollegiate in 2006).

Collectively, the Yellow Jackets’ four counting players recorded just two bogeys Monday. They piled up 20 birdies and have 40 over 36 holes, third-most in the field.

Like that round, reigning U.S. Amateur champion Andy Ogletree (Little Rock, Miss.) led the way with a bogey-free 6-under-par 66, and surged into the top 10 individually at 5-under-par 139. Sophomore Connor Howe (Ogden, Utah) also went bogey-free in posting his second straight 68, keeping a share of the lead after 36 holes at 8-under-par 136.

Redshirt freshman Bartley Forrester (Gainesville, Ga.), whose 72 counted for Tech Sunday, followed that with a 6-under 66 Monday, posting five birdies and an eagle on the Rio Mar Resort’s River Course. Senior Luke Schniederjans (Powder Springs, Ga.) provided the Jackets’ fourth counting score with a 68. Senior Tyler Strafaci (Davie, Fla.) shot 74 and did not count for Tech.

TEAM LEADERBOARD – The top teams on the leaderboard all posted strong rounds Monday, with the top four teams all under par by double digits. But the Yellow Jackets’ were strong top to bottom with four sub-70 rounds in fashioning their 20-under-par round of 268, allowing them to leapfrog No. 2 Oklahoma, who led by one shot after 18 holes and shot 18-under-par 270 on Monday. The Yellow Jackets finished 36 holes at 26-under-par 550, and the Sooners at 25-under-par 551.

INDIVIDUAL LEADERBOARD – Connor Howe leads four Yellow Jackets among the top 10 through 36 holes. The sophomore from Ogden, Utah is tied for the lead at 8-under-par 136 with Logan Sowell of the College of Charleston, who shot the best round of the tournament so far Monday with a 7-under-par 65. 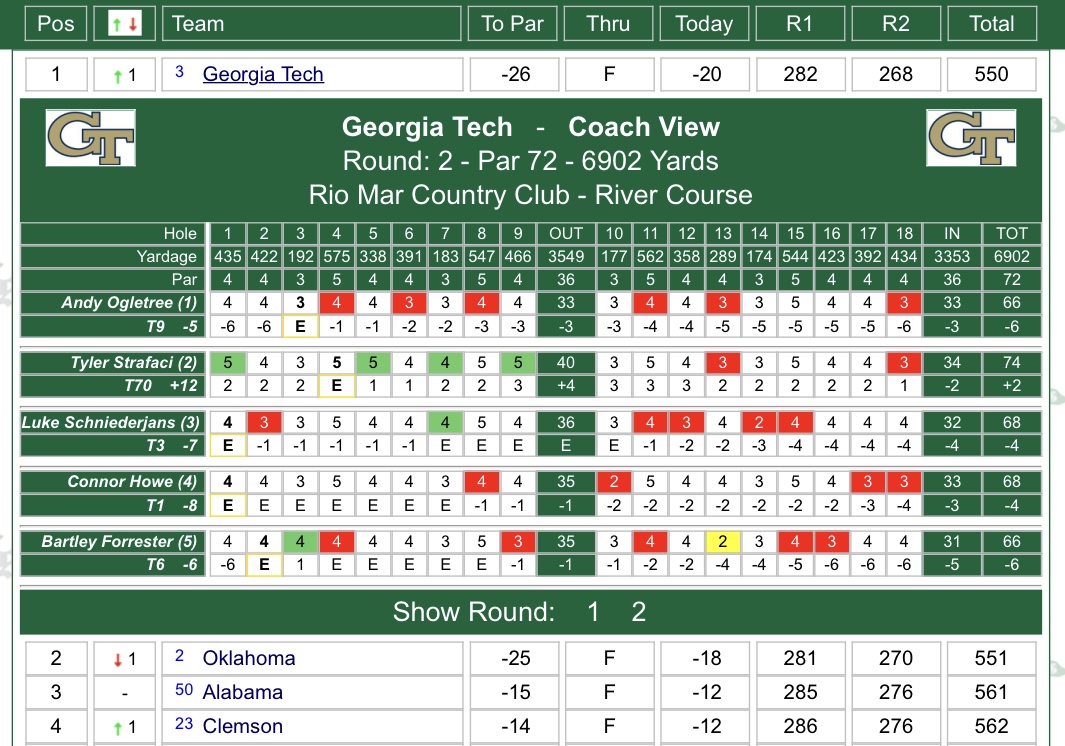 "This was one of our best days ever as a group. We started better than round one and then just kept moving forward. From the golf that I saw first-hand, the ball striking was tremendous, and we made some very good putts. So it was a pretty stress-free day as a group from tee to green. We had no bogeys on the back nine for the entire team, I believe, just an outstanding effort all-around. We’re in the final group again, so we’re looking forward to the challenge."

TOURNAMENT INFORMATION – Georgia Tech is making its 28th appearance in the Puerto Rico Classic, typically the second event on the Yellow Jackets’ spring schedule after its opening trip to Hawai’i, having participated in every renewal of this tournament. The 54-hole event concludes Tuesday with a shotgun start at 7:30 a.m. Tuesday. The event is played at the River Course (6,902 yards, par 72) at Rio Mar Beach and Spa Resort.

Andy Ogletree Named to U.S. Team for Palmer Cup
Around the Green with Ben Smith