Strafaci is one match away from duplicating the feat his teammate, Andy Ogletree, accomplished last August at Pinehurst, N.C., and also become the fourth Georgia Tech golfer to win the national amateur title. No collegiate golf program has ever had two different team members win the U.S. Amateur in back-to-back years. Should Strafaci win Sunday, Georgia Tech would become the first. Sunday’s 36-hole championship match begins at 12:30 p.m. Eastern time, with the second 18 holes starting at 6 p.m. and Golf Channel airing coverage beginning at 7 p.m.

The Davie, Fla., senior will face Charles “Ollie” Osborne of Reno, Nev., an SMU junior who defeated Strafaci’s teammate, Noah Norton, in the round of 32. Osborne dispatched Matthew Sharpstene of Asheville, N.C., 4 and 2, in Saturday’s other semifinal.

By reaching the championship match, Strafaci and Osborne receive exemptions into the 2021 U.S. Open Championship and likely invitations to the 2021 Masters. The champion also receives a berth in the 2021 Open Championship, provided he remains an amateur. That’s a lot on the line for a player who, after the Covid-19 pandemic scuttled most of the spring golf season, decided not to turn pro and instead take advantage of the NCAA’s rule allowing him to repeat his senior year. Now he is on the precipice of winning amateur golf’s biggest title.

“So cool, just awesome,” said an emotional Strafaci in his post-round interview with Golf Channel. “I’ve always dreamt of just being in the championship match and potentially playing in the Masters as an [amateur]. I never thought this would come, because I thought I was done with amateur golf. So it’s pretty amazing.”

It’s going to be an epic #USAmateur championship match 👊

Tyler Strafaci is moving on to the #USAmateur Championship Match!

Strafaci, ranked No. 56 in the World Amateur Golf Rankings, looked as though he would finish off Gupta early in Saturday’s opening semifinal, leading from the first hole. The Tech All-American built his advantage to three holes with a birdie at the fourth and a par at the fifth. After dropping the eighth hole, Strafaci birdied the next two holes to move ahead by four and maintained that lead after the players parred 11 and 12.

Gupta, however, staged a remarkable comeback as Strafaci played solidly but conservatively, but continued to leave potential winning putts short of the hole. The Concord, N.C., native used his deft short game to win four of the next five holes, getting birdies at 13 and 16, and squared the match with a par at 17, setting the stage for another dramatic final hole finish.

At the par-5 18th, Strafaci hit a solid tee shot and placed his second shot short and right above a greenside bunker. Meanwhile, Gupta landed his drive in a fairway bunker and took three shots to exit, hitting the front lip of the trap with his first two attempts. Gupta managed to get his third try from the bunker onto the green while Strafaci pitched up within birdie range. After Gupta missed his bogey putt, he conceded the hole and the match to Strafaci.

“After nine holes I was in complete control of the match, but Aman just turned it on and played really well on the backside,” said Strafaci. “I didn’t play great but I still was playing fine. Aman made two or three birdies on the back side and put me in a bad spot pressure-wise. I wasn’t responding to it well, I’m not gonna lie. My Dad (and his caddie, Frank) helped me out on the last hole to stay positive and just try to make birdie. That helped a lot. It’s just another weird finish, I don’t know how to describe it.

“It was a great match. I still played solid, but tomorrow I need to do a better job, if I get ahead, of keeping the pedal down.”

.@TyStrafaci showed his skill early and his perseverance late. After losing a 4-up lead to Aman Gupta, the @GTGolf standout closed out his third consecutive match on the 18th hole.

Strafaci reached the final four with a 4 and 2 opening-round victory over Kelly Chinn of Great Falls, Va., a 2 and 1 win over Julian Perico of Peru in the round of 32, and 1-up decisions over Segundo Oliva Pinto of Argentina and Stewart Hagestad of Newport Beach, Calif., in the round of 16 and quarterfinals, respectively. In the quarterfinals, Strafaci needed to make a 3½-foot par putt to oust 2016 U.S. Mid-Amateur champion Stewart Hagestad by the same margin, and in Thursday afternoon’s Round of 16, a rules breach by Segundo Oliva Pinto’s caddie on No. 18 gave Strafaci a 1-up triumph after the two were deadlocked going to Bandon Dunes’ par-5 closing hole.

In addition to the U.S. Amateur history at stake Sunday, the 22-year-old Strafaci is attempting to win his third major title this summer and join Tech’s legendary Bobby Jones (1924, 1925, 1927, 1928, 1930), Matt Kuchar (1997) and Ogletree as champions of the national amateur. He not only has a chance to become the fourth Georgia Tech player to win the U.S. Amateur, but also the second member of his family to win a USGA championship. His grandfather, Frank Strafaci, won the 1935 U.S. Amateur Public Links.

Earlier this summer, Strafaci won the North & South Amateur on July 4, also with his father Frank on his bag, and captured the Palmetto Amateur title one week later. Strafaci, who competed in the 2018 U.S. Open at Shinnecock Hills and two U.S. Junior Amateurs, has played in three previous U.S. Amateurs and reached match play twice, advancing as far as the round of 32. Strafaci will return to Georgia Tech for a fifth year in 2020-21 as a three-time All-East Region and two-time All-Atlantic Coast Conference performer. 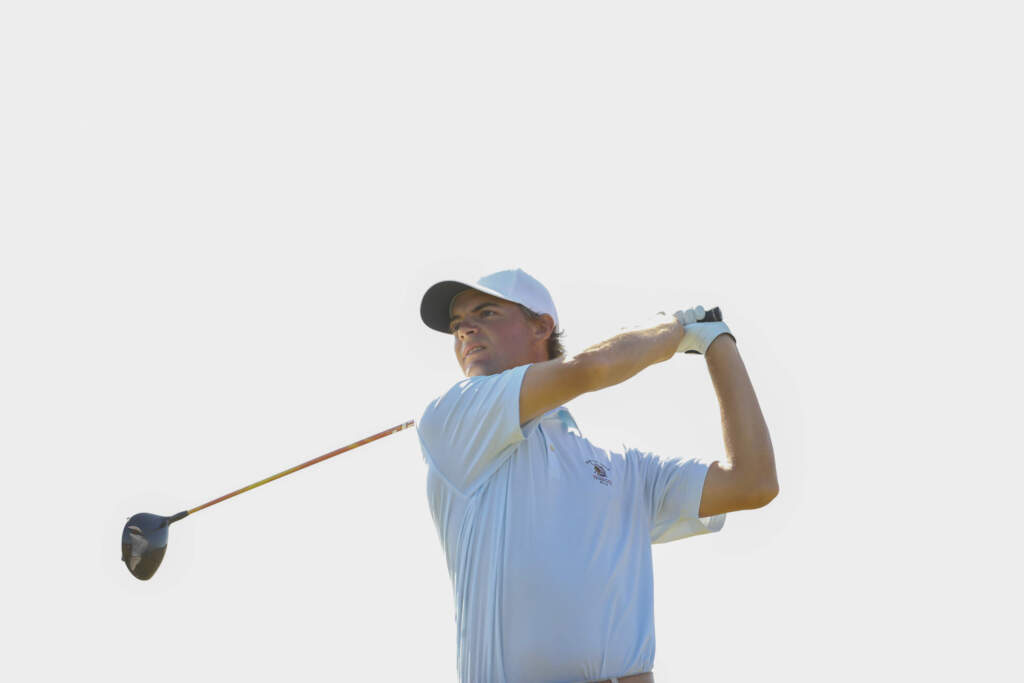 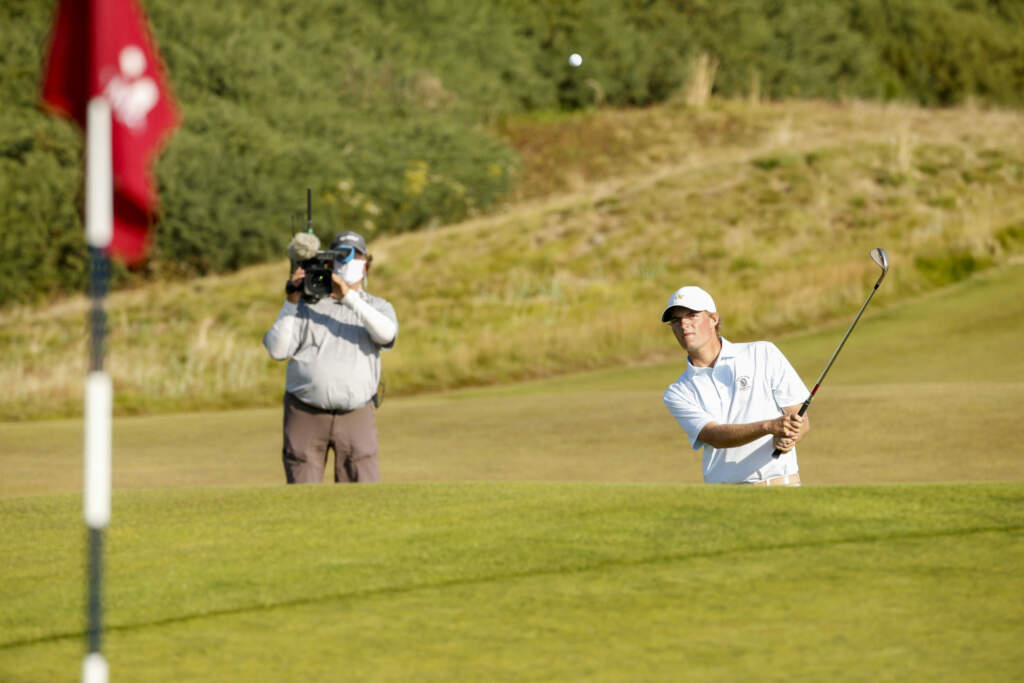 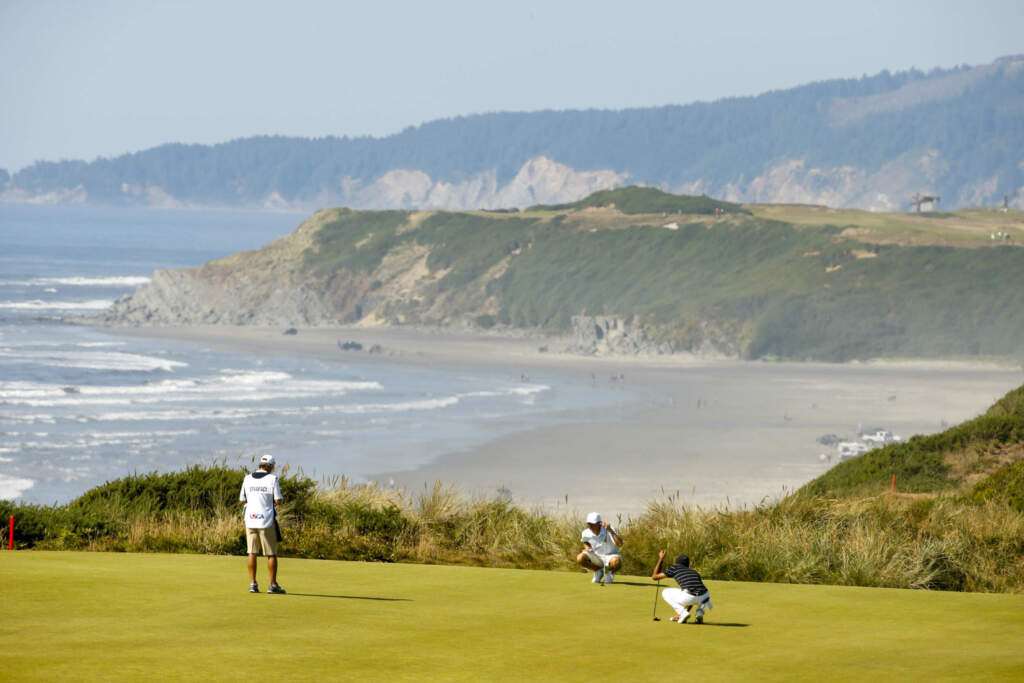 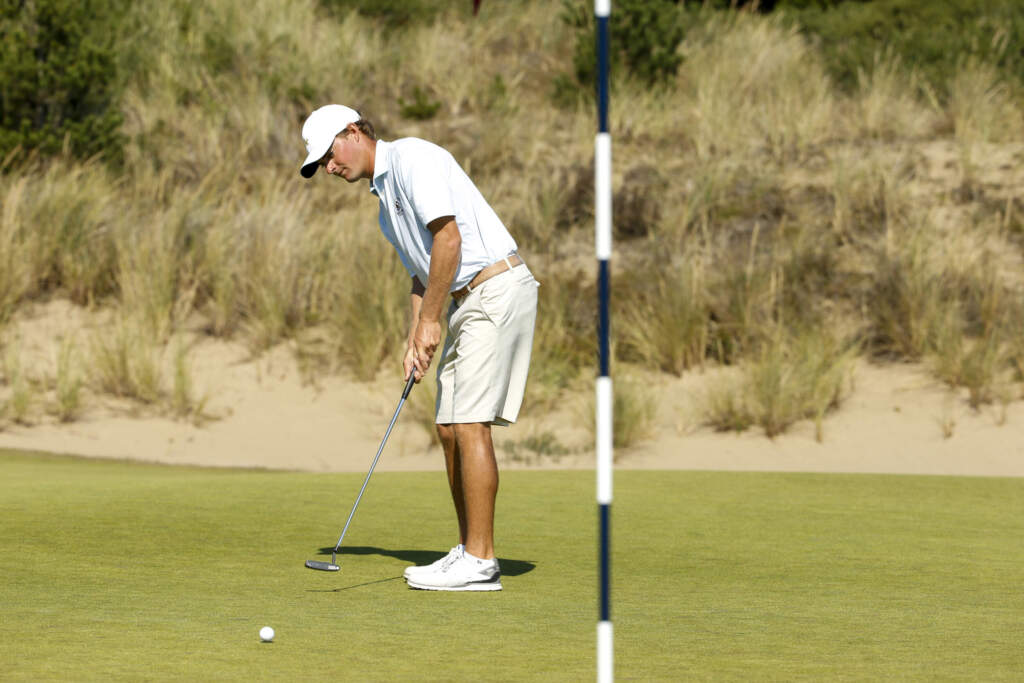 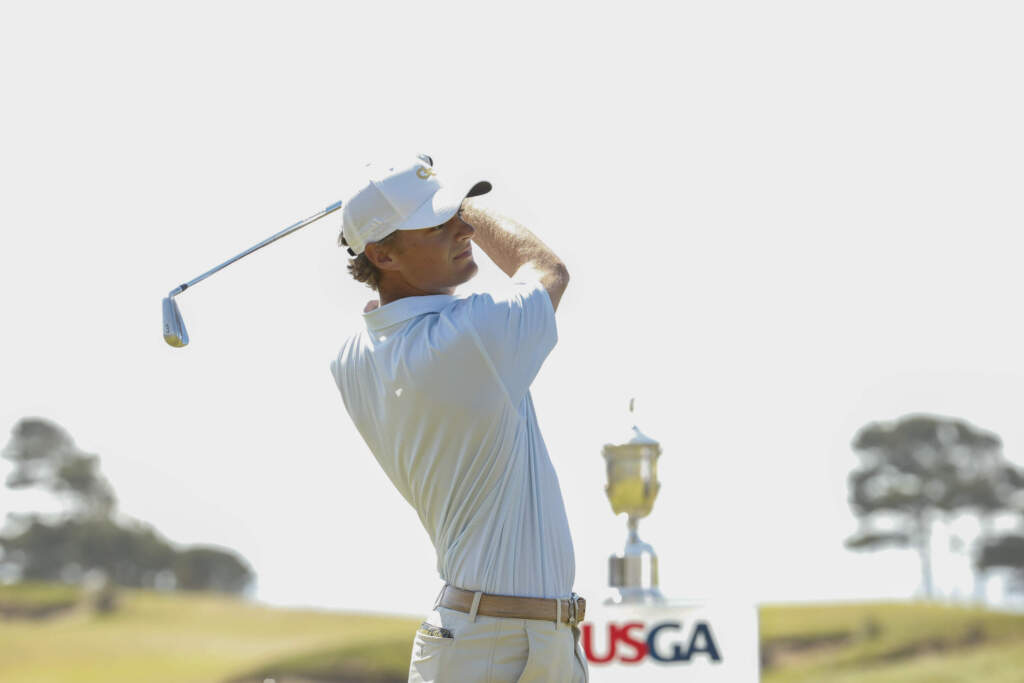 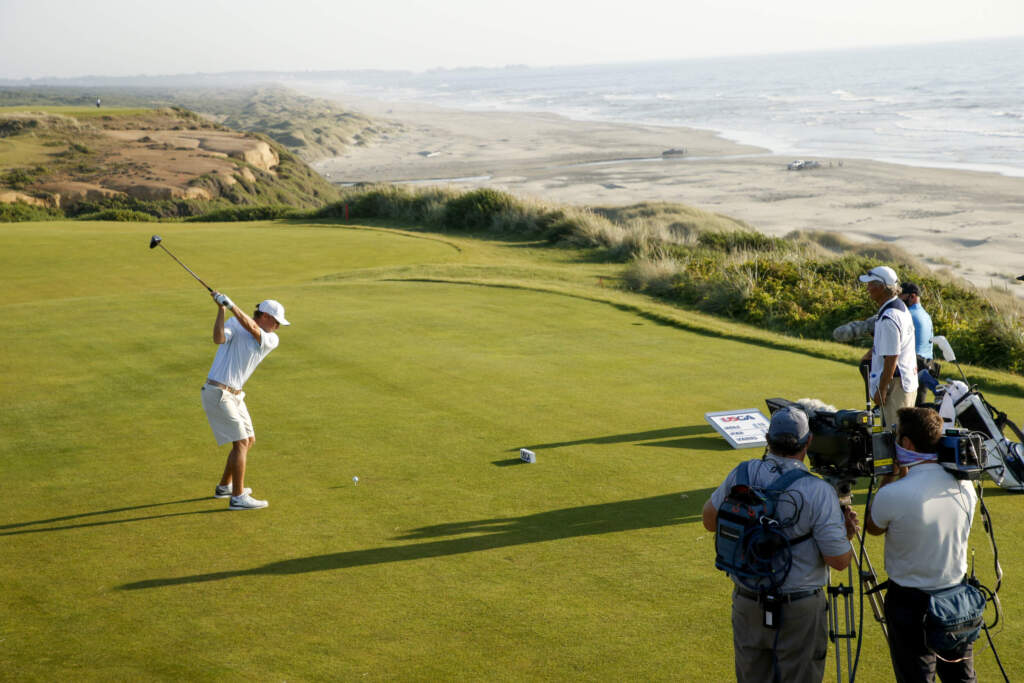 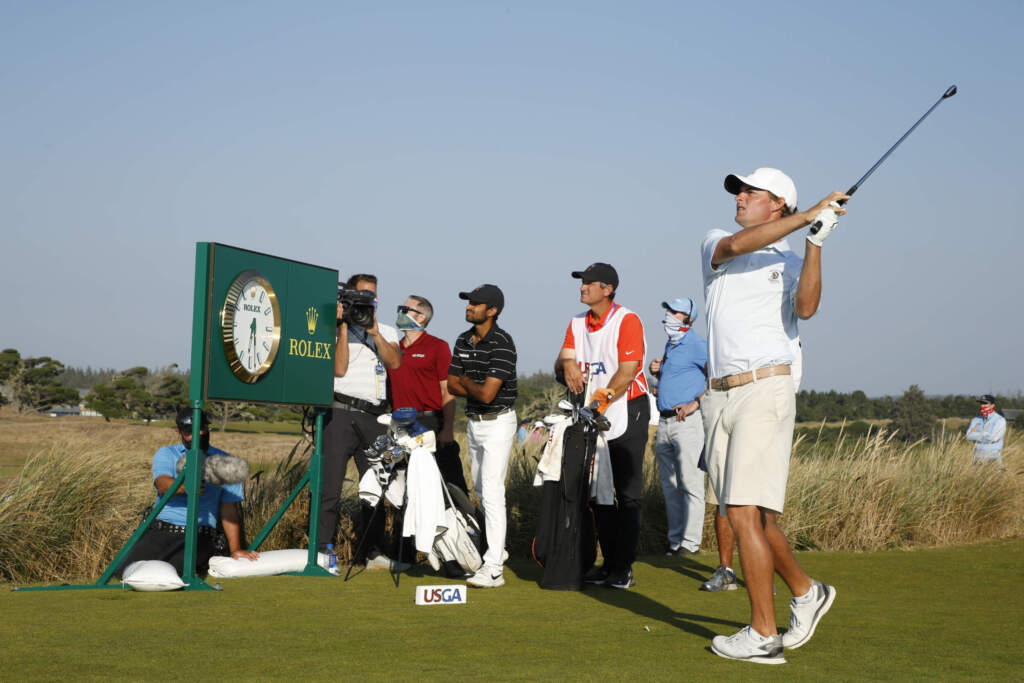 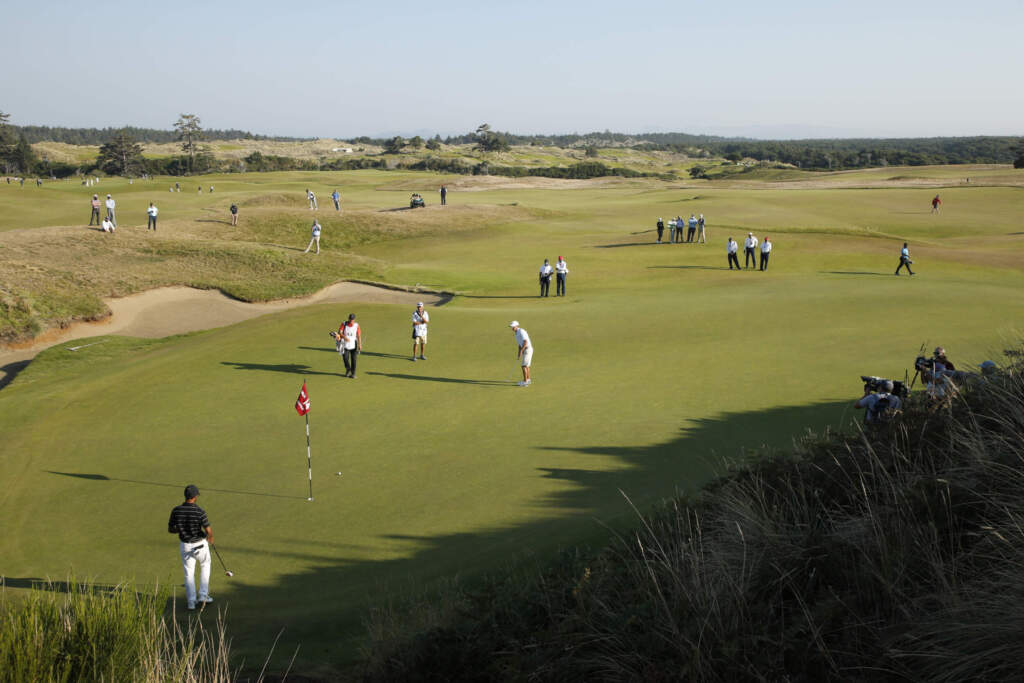 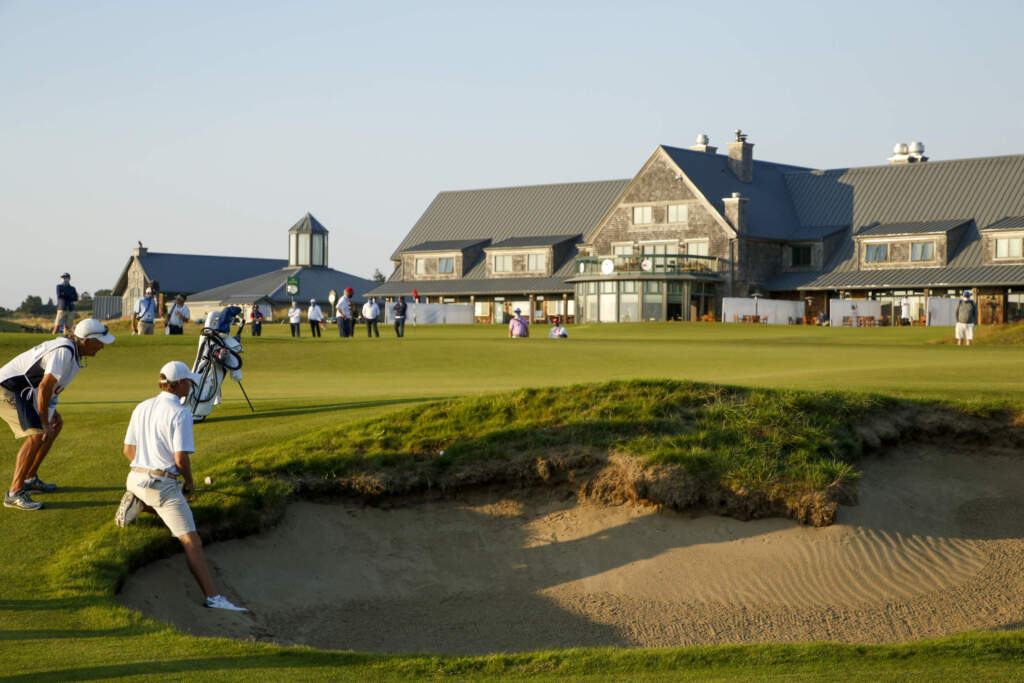 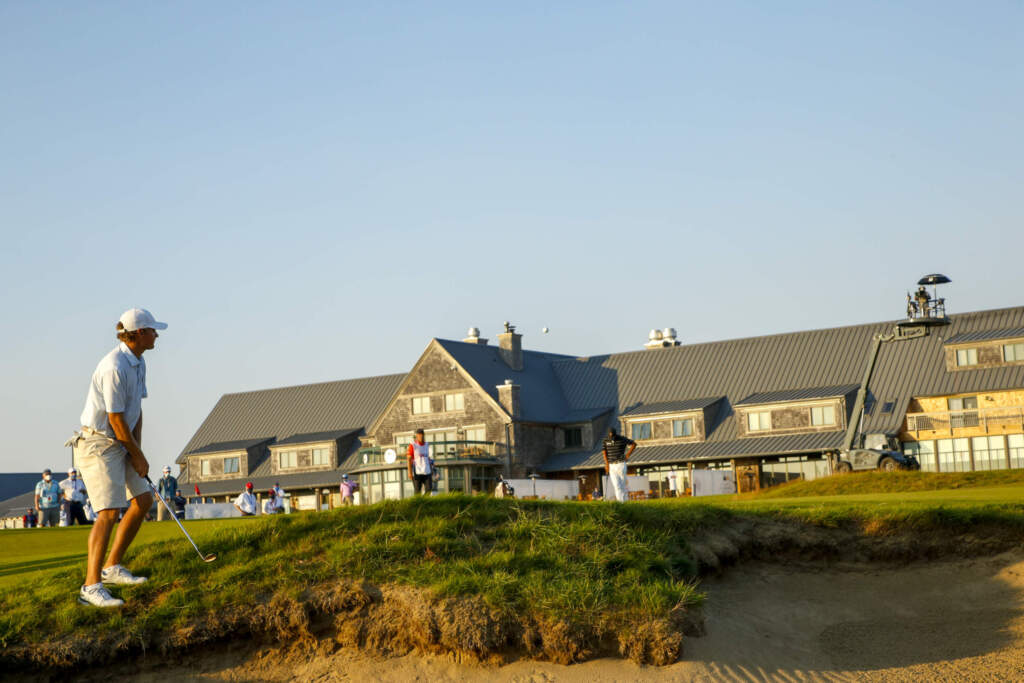 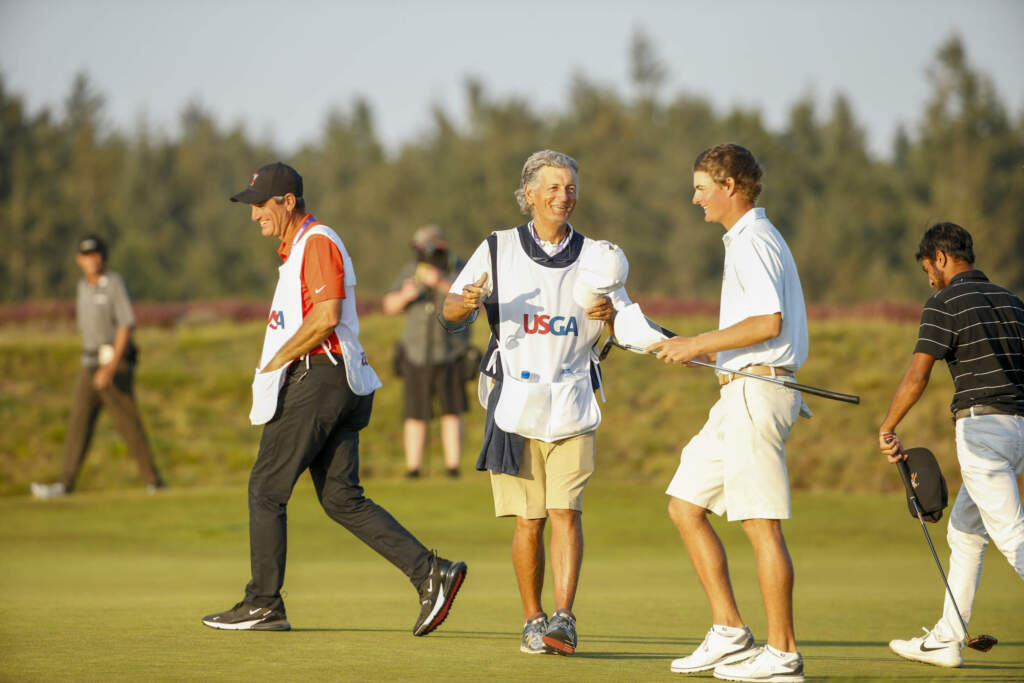 "I just need to keep doing what I’m doing. I would say the only thing I need to improve on from today is my putting. I was very conservative with my lag putts, and I feel like that put a lot of pressure on my short putts, which in turn wore me out at the end of the round. I feel like I’m hitting it fine, I just need to be confident and play to win, and whatever happens, happens."