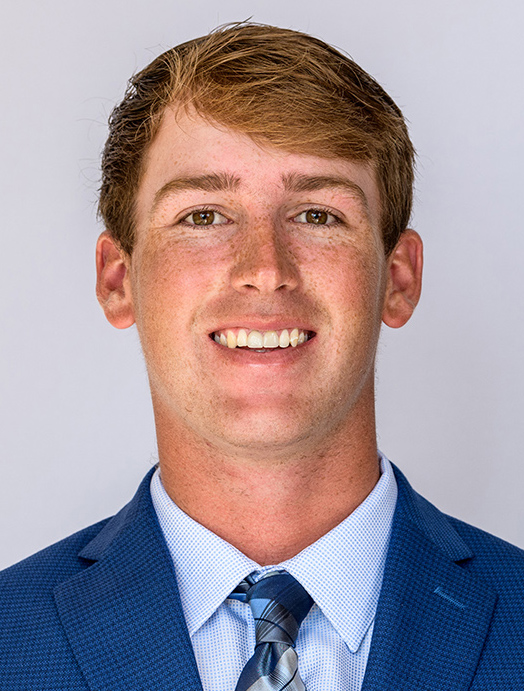 General:  Two-time All-American by the Golf Coaches Association of America and by Golfweek magazine … Won the 2019 U.S. Amateur Championship at Pinehurst Resort and Country Club, joining Bobby Jones (five times) and Matt Kuchar (1997) as the three Georgia Tech players who have won the title … Repeated Kuchar’s accomplishment by finishing as low amateur at the 2020 Masters to capture the Silver Cup … Finished his amateur career No. 4 in the World Amateur Golf Ranking and No. 4 in the Golfweek Amateur Ranking … Earned a spot on the winning United States team for the Walker Cup matches in September in Hoylake, England, and with the USA team for the Spirit International competition in November in Trinity, Texas … Named to the U.S. team for the 2020 Arnold Palmer Cup in Lahinch, Ireland … Compiled a career stroke average of 71.54 over 110 rounds, fifth-lowest in Tech history, and eight top-10 finishes … Strong, long hitter with good athletic ability … One of the best drivers ever in the program … Markedly improved his putting, taking advantage of a tip from teammate Noah Norton, and worked hard on his short game between the fall and spring of his junior year … Top-ranked player in the state of Mississippi (was Tech’s first golfer from Mississippi) and and No. 11 nationally in his class when he signed … Enjoys all sports … Graduated with his bachelor’s degree in business administration in May, 2020.

2020 Amateur Highlights:  Received exemptions to compete in three PGA Tour events  – the Charles Schwab Challenge, the RBC Heritage and the Memorial – as well as the U.S. Open and the Masters as a result of winning the 2019 U.S. Amateur … Tied for fourth in stroke play and reached the quarterfinals of the Western Amateur in Carmel, Ind. … Failed to advance to match play in defense of his U.S. Amateur title at Bandon Dunes, Ore. … Tied for 34th and finished as the low amateur at the Masters (286, -2).

Made the second-team PING All-American team chosen by the Golf Coaches Association of America, third-team by Golfweek magazine … Top-ranked Tech player at the time the spring season was halted due to the coronavirus outbreak – No. 20 in Golfstat, No. 25 in the Golfweek/Sagarin Index … Logged two top-10 finishes in three events in the spring … Opened the spring with near-victory at the Amer Ari Invitational, tying for third place (204, -12), and tied for sixth at the Puerto Rico Classic (209, -7) … Tied for 26th at the Southern Highlands Collegiate (220, +4) … Had a solid fall season capped by winning all three of his matches to lift Tech to the championship of the Cypress Point Classic, including a 5 and 4 victory over Duke’s Quin Riley in singles … Tied for ninth at the Olympia Fields/Fighting Illini Invitational (212, +2) and tied for 35th at the Golf Club of Georgia Collegiate Invitational (221, +5) … Missed the Carpet Capital Collegiate while competing for the United States in the Walker Cup.

2019 Amateur Highlights: Tied for 19th in stroke play at the U.S. Amateur  at Pinehurst, N.C., and won the title after he came from four holes behind to defeat John Augenstein of Vanderbilt, 2&1, in the 36-hole final … Defeated Chandler Phillips of Texas A&M in the round of 64, Indiana high schooler Maxwell Moldovan in the round of 32, Blake Hathcoat of Fresno, Calif., in the round of 16, Spencer Ralston of Georgia in the quarterfinals and Mississippi high school junior Cohen Trolio in the semifinals … Victory earned him invitations to play in the 2020 Masters, U.S. Open, Open Championship, Memorial Tournament and RBC Heritage … Helped the United States to a 15 1/2 to 10 1/2 victory over Great Britain and Ireland in the Walker Cup, the first U.S. victory on GB&I soil since 2007 … Earned a point for the U.S. in its Sunday rally with a 2 and 1 singles victory over Conor Gough …  Won the Monroe Invitational with a 1-under-par score of 279, winning by two strokes … Tied for 11th in stroke play at the North & South Amateur (also at Pinehurst) and reached the round of 16 of match play … Tied for 17th at the Players Amateur in Bluffton, S.C. (277. -11) … Qualified for the U.S. Amateur by finishing fourth and grabbing one of five spots at Capital City Club-Crabapple (133, -7) … Competed for Team USA in the Spirit International Amateur Golf Championship in Trinity, Texas, teaming with Texas’ Cole Hammer to win the men’s title.

Second-team All-American by the Golf Coaches Association of America … Made the All-ACC team for the first time in his career, and GCAA All-Region for the second time … Semifinalist for the Jack Nicklaus Award … Was Tech’s top player in the spring season, high finisher for the Jackets in six of eight events … Only event he was not the high finisher was the Clemson Invitational, where he tied for fifth (205, -11) and the NCAA Championship … Runner-up at the ACC Championship by one stroke (204, -12) … Tied for 12th at the NCAA Pullman Regional (203, -7) … Has four top-10 finishes this spring – tied for fourth at the Puerto Rico Classic (211, -5) and for ninth at the Southern Highlands Collegiate (208, -5) … Tied for 14th at the Valspar Collegiate Invitational after closing with a career-low round of 63 … Under par 15 of 21 rounds in the spring, compiling a 69.33 stroke average, 68.33 over his last 12 rounds, prior to the NCAA Championship … Second on the team for the year with a career-best 70.38, collectively 37-under-par … Highest-ranked Tech player in both national rankings, finished spring at No. 19 in Golfstat and No. 23 in Golfweek/Sagarin Index.

2018 Amateur Highlights: Advanced out of a U.S. Open local qualifier April 30 in Marietta, Ga., co-medalist with a 67 (-3), but fell two shots shy of qualifying for the U.S. Open at his sectional qualifier in Roswell, Ga. … Shot 70-69 on the weekend to finish tied for third at the Monroe Invitational (284, +4) … Tied for 38th at the Players Amateur … Qualified for the U.S. Amateur by finishing third (71-69) at the Brickyard in Macon, Ga.

2017-18:  Continued his solid, steady play, posting five top-20 finishes and between 16th and 43rd in the rest … Earned GCAA All-East Region recognition … Tied for seventh in the opening event of the fall, the Carpet Capital Collegiate … Top finishes in the spring were a T-15 at the General Hackler Championship and T-13 at the Valspar Collegiate, and he tied for 16th at the NCAA Raleigh Regional (209, -4) … Stroke average of 71.88 was fifth on the team … Ranked No. 86 nationally by Golfstat, No. 101 in Golfweek/Sagarin ratings … One of three Jackets to play in all 10 events this year.

2017 Amateur Highlights: Qualified for the U.S. Amateur by tying for third place in his qualifier at Capital City Club-Crabapple Course … Tied for 15th in stroke play at the U.S. Amateur, but lost his opening round match … Three top-10 finishes this summer; T-7 at the Monroe Invitational, T-10 at the Dogwood Invitational and T-10 at the Players Amateur.

2016-17:  Enjoyed a solid freshman year, playing in every event, eight of those as a member of the travel team … Had four top-20 finishes (T18 at Maui Jim Intercollegiate, T12 at Puerto Rico Classic, T18 at Valspar Collegiate, T17 at NCAA Stanford Regional), and three others close to the top 20 (T22 at Amer Ari Invitational, Clemson Invitational and ACC Championship) … Best tournament score was 211 (-2 at Maui Jim, -5 at Amer Ari) .. Did not finish lower than 44th with one exception (Golf Club of Georgia) … Posted a 72.63 stroke average (5th on the team) and was ranked No. 173 by Golfstat (No. 194 in the Golfweek/Sagarin Index).

2016 Amateur Highlights: Capped off a solid summer with a five-shot victory at the Cardinal Amateur … Also tied for 13th at the Southeastern Amateur and 36th at the Sage Valley Junior Invitational.

Junior Golf: Ranked No. 25 nationally in all classes and No. 11 in the class of 2016 by the Junior Golf Scoreboard … Top-ranked junior in his class in the state of Mississippi and No. 2 overall … In 2015, finished 23rd in the Western Junior, 24th in the Junior Players and 24th in the Foot Joy Junior … Made it to the quarterfinals of the U.S. Junior Amateur Championship and shot a 65 in a sectional qualifier to reach the U.S. Amateur.