“I fist pumped my birdie putt on No. 18 because I thought it secured a top-10,” Reeves said after his win became official. “I’m just kind of shocked, really.”

Reeves won three times as a collegiate golfer at Georgia Tech, earning All-America honors as a senior before graduating in 2014.

Reeves, who teed off more than two hours before the final group, dropped a shot with an early bogey on the par-4 third. Despite the setback, the Georgia Tech product rebounded with birdies on Nos. 4, 6 and 7 to get back to 6-under for the week.

As Reeves made his way to the back nine, 54-hole leader Ryan Ruffels began his final round. Ruffels struggled early carding back-to-back bogeys on Nos. 2 and 3. Despite the early struggles, he followed a birdie on the par-5 fourth with an eagle at the par-5 seventh and regained the solo-lead at 13-under.

Reeves caught fire on the back nine and continued his climb up the leaderboard. After birdies on Nos. 10 and 11, the 29-year-old recorded an eagle on the par-5 15th, moving him to 10-under for the week. On his 72nd hole, Reeves made his sixth birdie of the day to post 11-under and take the clubhouse lead. 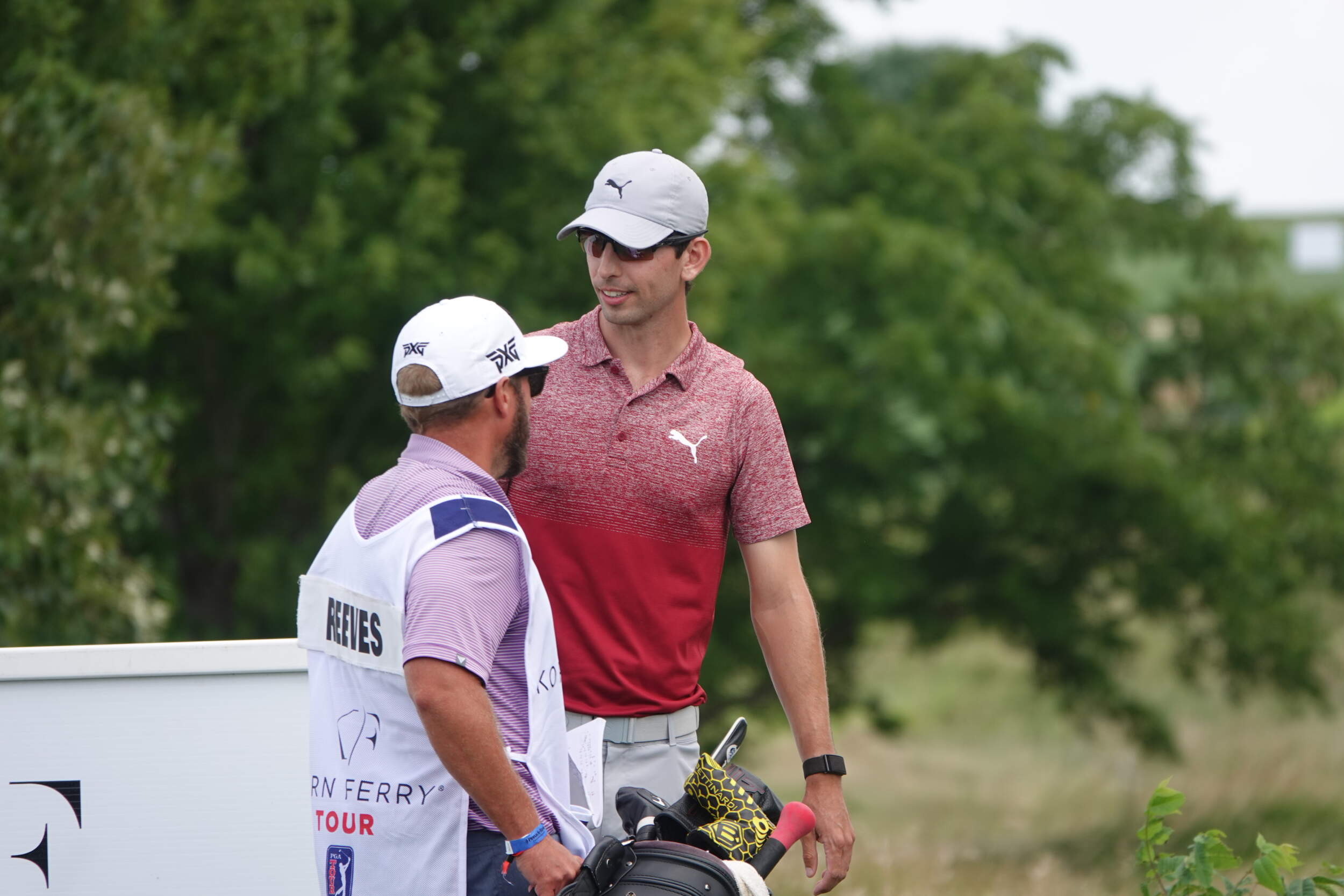 Reeves made his sixth birdie of the day on the final hole and took the clubhouse lead.

“I started realizing it was close when I was tied for the lead and the last group only had two holes to play,” Reeves said. “I just was just kind of like, ‘Wow this could actually happen.’”

After the eagle, Ruffels gave a stroke back with a bogey on the par-3 eighth. The Australian tallied another birdie at the par-4 10th to get back to 13-under, but quickly gave two strokes back with bogeys on Nos. 11 and 13. Entering his final stretch of holes, Ruffels carded a birdie on the par-5 15th to regain the lead at 12-under.

As Reeves began to warm up on the range for a potential playoff, Ruffels carded back-to-back bogeys on Nos. 16 and 17, giving Reeves the solo-lead at 11-under. On his 72nd hole, Ruffels’ lengthy birdie attempt narrowly missed, securing Reeves’ first Korn Ferry Tour title.

“I didn’t think I was going to get it done,” he said. “I decided to come back out here and warm up like normal and was shocked that I had the lead with one hole to be played in the tournament. It went the opposite of how I thought, I’m still shocked.”

Our largest come-from-behind victory since 2010!

“For her to be with me through all the lows and to now experience a high, it’s amazing.”

All smiles when @seth_reeves FaceTimed his wife Patricia after learning he had won the 2020 @PinnBankGolf. pic.twitter.com/Dk4aKtX66J

Grateful and thankful.@GTGolf alum @seth_reeves goes from finishing in last to rising to the top of the leaderboard all within two weeks. pic.twitter.com/WTRgMh79ih

After earning his PGA TOUR card through the 2018 Korn Ferry Tour Finals, Reeves struggled as a rookie on TOUR. In 25 TOUR starts, Reeves made 11 cuts but failed to retain his card.

“I finished dead-last two weeks ago. It’s been hard, I’ve been in kind of a dark place with my game and trying to figure out how to play to my abilities,” Reeves said. “When you struggle as much as I have, you have all those doubts. This tells me I can do it. If I can do it once, I can do it again.”

Next week, the Korn Ferry Tour travels to Portland, Oregon, for the WinCo Foods Portland Open presented by KraftHeinz.