Norton, Strafaci Reach Round of 32 at U.S. Amateur

Bandon, Ore. – Georgia Tech’s Tyler Strafaci and Noah Norton each defeated higher seeded players Wednesday to win in the opening round of match play and advance to the round of 32 at the 120th United States Amateur Championship.

Strafaci, who tied for 36th in the stroke play qualifier and was seeded No. 41, teed off early against No. 24-seed Kelly Chinn of Great Falls, Va., and downed the rising high school senior, 4 and 2. The Tech senior from Davie, Fla., methodically built a 3-hole lead after nine holes, winning all three holes with birdies. Chinn not able to get closer than two holes, and Strafaci closed him out with pars at the par-3 15th and the par-3 16th holes.

Norton, who had tied for 48th place in stroke play but wound up with the No. 59 seed, bolted out of the gate against the No. 6 seed David Ford, winning the first six holes, five of them with pars. The Chico, Calif., senior made bogey on three of the net four holes, however, allowing the rising high school senior from Peachtree Corners, Ga., to creep back into the match. But that was as close as it would get as Norton eliminated Ford on the 16th hole as both players made par.

Strafaci has a chance to make his deepest match play penetration Thursday in three career tries Wednesday when he meets Julian Perico of Peru in a 7:30 a.m. (Pacific time) match in the round of 32. Perico, the No. 9 seed and a junior at Arkansas, scored a 3 and 2 win over Argentina’s Andres Schonbaum in his opening match. Norton, who reached the round of 16 in 2018 at Riviera Country Club, can match his deepest run if he can get by No. 27 seed Charles Osborne, an SMU junior from Reno, Nev. (9:20 a.m. Pacific time). Winners advance to the round of 16, which will be played Thursday afternoon. 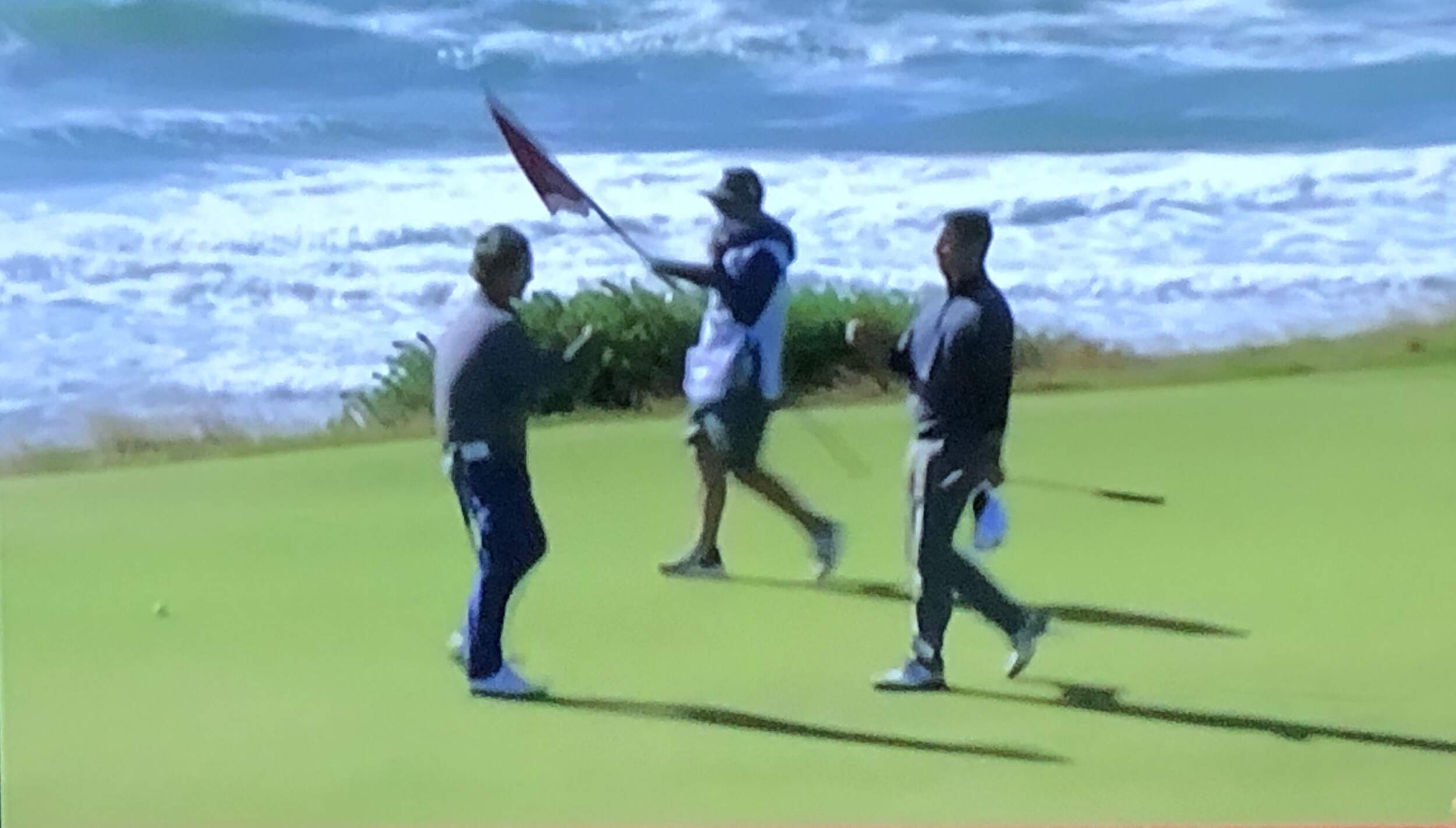 Noah Norton bumps fists with David Ford after finishing off his 3&2 victory Wednesday.

Norton, 21, has competed in three previous U.S. Amateurs and reached match play in two. Norton also qualified for the 2019 U.S. Open at Pebble Beach and has reached match play in two U.S. Junior Amateurs. Norton, a rising senior at Georgia Tech, is ranked No. 60 in the World Amateur Golf Ranking. He is a two-time All-Atlantic Coast Conference (ACC) selection and won the Patriot All-America Invitational last December. He finished runner-up to Cooper Dossey in the 2019 North & South Amateur and was the 2017 California State Amateur runner-up.

Strafaci, 22, won the 2020 North & South Amateur on July 4, defeating William Holcomb V, 3 and 1, in the final. Strafaci, who competed in the 2018 U.S. Open at Shinnecock Hills and two U.S. Junior Amateurs, has played in three previous U.S. Amateurs and reached match play twice. Ranked No. 51 in the world, Strafaci also won the Palmetto Amateur this summer, a week after his North & South triumph. He will return to Georgia Tech for a fifth year in 2020-21 and is a three-time All-East Region and two-time All-Atlantic Coast Conference (ACC) performer.

Because of the Covid-19 outbreak, all qualifying events for the U.S. Amateur were cancelled, and the 264-player field (down from the normal 312) was established using a set of exemption categories, expanded use of the World Amateur Golf Ranking and finishes in recent United States Golf Association championships.