Rocky Face, Ga. – Tyler Strafaci fired a mistake-free 7-under-par 65 Saturday, taking a share of the individual lead, and No. 6 Georgia Tech fired a 13-under-par 275 to tie Tennessee for the team lead after 36 holes of the 30th Carpet Capital Collegiate at The Farm Golf Club.

TECH LINEUP – Strafaci, a junior from Davie, Fla., parred his first six holes, then birdied seven of the last 12 in posting a mistake-free 65, the best round of his career and the low score of the tournament so far, to move into a tie for first place individually at 9-under-par 135. Norton, a sophomore from Chico, Calif., birdied six holes with one bogey to post a 67 and move into fifth place alone at 6-under-par 138.

Junior Luke Schniederjans (Powder Springs, Ga.), who shot a 69 Friday, had five birdies in his round of 70, and is tied for sixth place at 5-under-par 139, while senior James Clark (Columbus, Ga.) posted a 73 Saturday as the Jackets’ fourth counting player.

Tech leads the tournament with 51 total birdies over 36 holes, with Alabama and Tennessee next with 42 each. Andy Ogletree leads individually with 12, while Strafaci and Schniederjans have 11 each.

TEAM LEADERBOARD – The Yellow Jackets got hot on the latter part of the front nine, and the four counting players wound up posting 23 birdies Saturday in their 13-under-par round of 275. Tech is 20-under-par (556) after 36 holes. Tennessee, which held a one-stroke lead on the Jackets after the opening round, posted a 12-under-par round of 276 and also has a 36-hole total of 556.

But the best round of the day belonged to Alabama, who scored even par in its opening round but blistered The Farm with an 18-under-par round of 270 Saturday to take third place at 558 (-18), making it a three-team race heading into Sunday’s final round.

INDIVIDUAL LEADERBOARD – Three Yellow Jackets are among the top seven individuals in the medal race, with Strafaci (70-65) sharing the lead with Tennessee’s Jake Meenhorst (69-66) at 9-under-par 135.

Davis Riley of Alabama and Brayden Garrison of Tennessee are tied for third place at 137 (-7), while Norton is alone in fifth place at 138 (-6). Schniederjans and Alabama’s Wilson Furr are tied for sixth place at 139 (-5). Seven other players are under par through 36 holes. 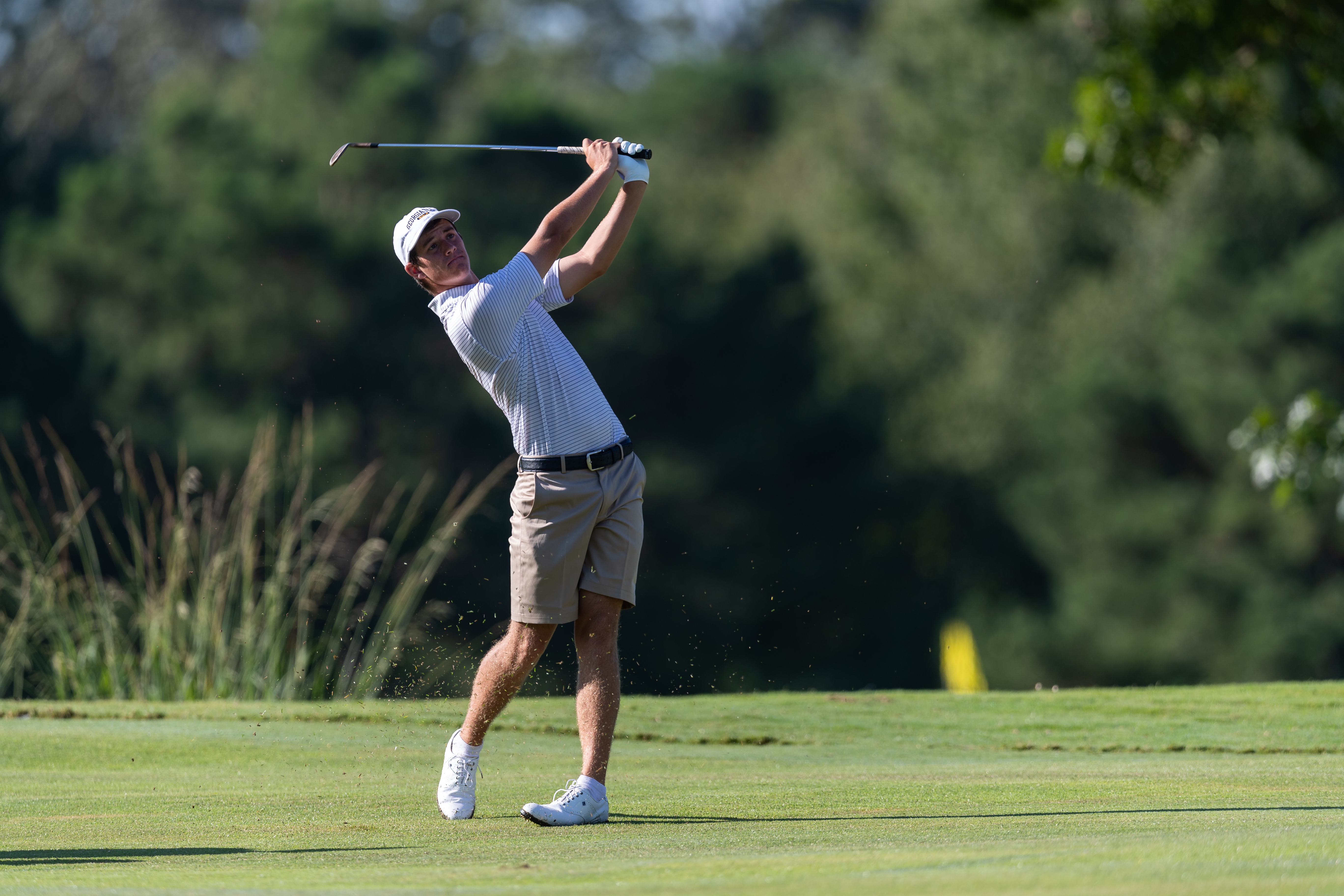 COACH BRUCE HEPPLER SAID – “We played really great from about the fifth hole on today. Three teams have played really well here. The conditions are really good and the greens are perfect. Tyler did everything you’re supposed to do during his round today. He got it done on all the scoring holes, made some solid plays on the other holes. He’s playing like he did during the summer. Luke was a couple of swings away from a really great day. Noah played very well, and James saved us a couple of shots by grinding it out. It’s all good.”

TOURNAMENT INFORMATION – The Carpet Capital Collegiate concludes Sunday at The Farm Golf Club, a 7,178-yard, par 72 layout designed by Tom Fazio near Dalton, Ga. The Yellow Jackets have been the institutional host of this event since its inception in 1989, winning eight times, most recently last fall in a playoff over Alabama. The 15-team field for this year’s event includes NCAA Tournament teams Clemson and Virginia from the Atlantic Coast Conference, as well Auburn, Alabama, Florida, LSU and South Carolina from the Southeastern Conference. Tech players have won medalist honors four of the last five years, including 2016 champion Luke Schniederjans.

TECH’S CARPET CAPITAL COLLEGIATE HISTORY – Georgia Tech has won the Carpet Capital Collegiate eight times in its 29-year history, most recently in 2017, the most of any participant. Clemson has won four times, Alabama three. Tech won the 2017 event in a playoff over Alabama. A Yellow Jacket has won medalist honors nine times, including four of the past five years (Luke Schniederjans in 2016, Jacob Joiner in 2015, Ollie Schniederjans in 2013 and 2014). Current PGA Tour pros Stewart Cink, Chesson Hadley, Troy Matteson and Bryce Molder also have claimed victory at The Farm, with Molder taking the title three consecutive times between 1998 and 1999, when the event moved from the spring to the fall schedule.