Tech posted its lowest score in seven rounds so far in the spring season, playing in sunny and warm, but windy (15 mph) conditions on the 6,875-yard, par-72 Hapuna Golf Course on the Eastern shore of the Big Island of Hawai’i. Those four Yellow Jackets, Howe, Noah Norton, Christo Lamprecht and Will Dickson, are among the top 11 individuals after the first round.

TECH LINEUP – Howe, a junior from Ogden, Utah, closed his opening round in strong fashion, playing 4-under-par over his final seven holes for his 67, and recorrded six birdies to share third place after the opening round.

Sophomore Luka Karaulic (Dacula, Ga.), despite four birdies on his card, shot 37 (+1) and didn’t count toward the team score Tuesday. The five Tech players in the counting lineup combined for 25 birdies, which leads the eight-team field.

Even Tech’s three players competing as individuals combined for 14 birdies Tuesday. Sophomore Bartley Forrester (Gainesville, Ga.) was the best of the group with a 2-under-par 70 and is tied with Dickson for 11th place, while Ben Smith (Novi, Mich.) shot 74, and sophomore Andy Mao (Johns Creek, Ga.) posted a 77.

Freshman Christo Lamprecht shot 69 and is in 10th place for the Yellow Jackets. (photo by Jeff Golden)

INDIVIDUAL LEADERBOARD – Arizona State’s Blake Wagoner, playing as an individual and not scoring for the Sun Devils’ team, set the tournament 18-hole record with a 9-under-par 63 Tuesday and grabbed a three-stroke lead over Washington’s Noah Woolsey (6-under-par 66). Wagoner birdied six of his first seven holes, and had a stretch of four more birdies in six holes on the back before a closing bogey.

Puig, Sisk, Tech’s Howe and Hawai’i’s Isaiah Konno are all tied for third place at 67, with Tech’s Norton in a group of three players tied for seventh place at 68. The Yellow Jackets’ Lamprecht is along in 10th place with his 69, and Dickson is tied with five other players for 11th place at 70. 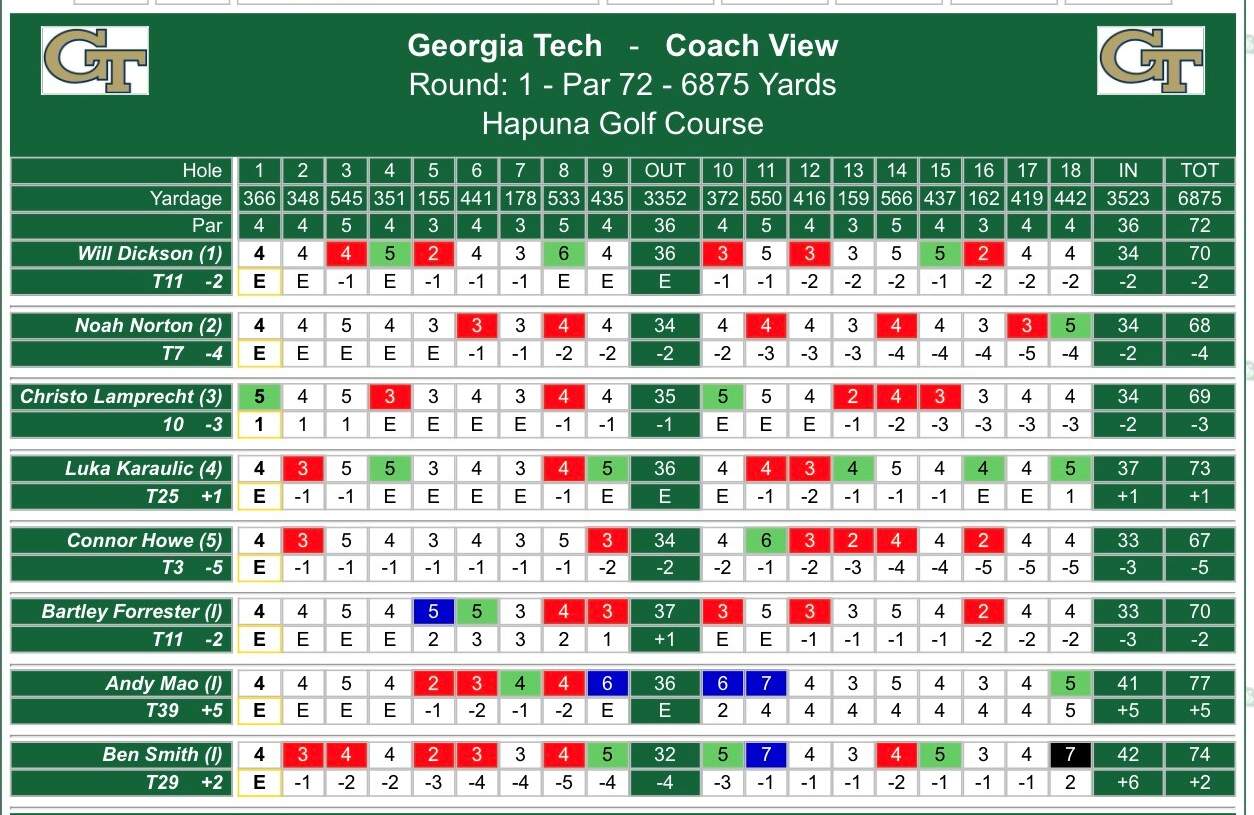 "This we a relevant scoring round for us, what a good team would shoot. The golf course is fun, with a lot of elevation changes and unique holes, and the conditions were positive for scoring today. We played well up and down through the lineup, Connor had a couple of good up-and-downs coming in to keep a good round together. This was a good round for our confidence and should build some belief in ourselves."

TOURNAMENT INFORMATION – Georgia Tech has played in the Amer Ari Intercollegiate every year since 1999. Tech has already played twice this spring, adding a pair of events to its spring slate after the fall season was cancelled. The 30th annual event, which runs through Thursday, is a 54-hole, 5-count-4 stroke-play tournament. The event this year will be contested on Hapuna Golf Course in Waimea (6,75 yards, par 72), rather than the usual Kings Course at the Waikoloa Beach Resort.

The change in venue is not the only effect of COVID on this year’s tournament. The field, still strong in quality, includes just eight teams rather than the normal 20, with the Jackets joining Arizona State, Hawai’i, Hawai’i-Hilo, Oregon State, San Jose State. Southern California and Washington.