THE FLATS – Luke Schniederjans fired a 4-under-par 68 Friday, leading No. 3 Georgia Tech to a 4-under-par score of 284 and a six-stroke lead after the opening round of the 31st Carpet Capital Collegiate at The Farm Golf Club in Rocky Face, Ga.

TECH LINEUP – Schniederjans birdied six holes and put the icing on the cake with an eagle-2 at the last, a difficult 417-yard, par 4 finishing hole. The senior All-American from Powder Springs, Ga., who won this event as a freshman, started out hot with four birdies in his first six holes. He gave all but three shots back after a double-bogey at 9, then played the back nine in 3-under-par to finish the day in a tie for first place individually.

Noah Norton was the only other Yellow Jacket under par Friday, posting a 2-under-par 70 that included an eagle at the par-5 15th, and the junior from Chico, Calif., is tied for third place, two shots off the lead. Senior Tyler Strafaci (Davie, Fla.) and redshirt sophomore Ben Smith (Novi, Mich.) both shot 73 to count for Tech, and are tied for 14th place.

Freshman Andy Mao (Johns Creek, Ga.), making his collegiate debut, stood 1-under-par through 14 holes but stumbled with a quadruple bogey and a double bogey at 15 and 16 and shot 77. Sophomore Connor Howe (Ogden, Utah), competing as an individual, shot 75 and is tied for 30th. 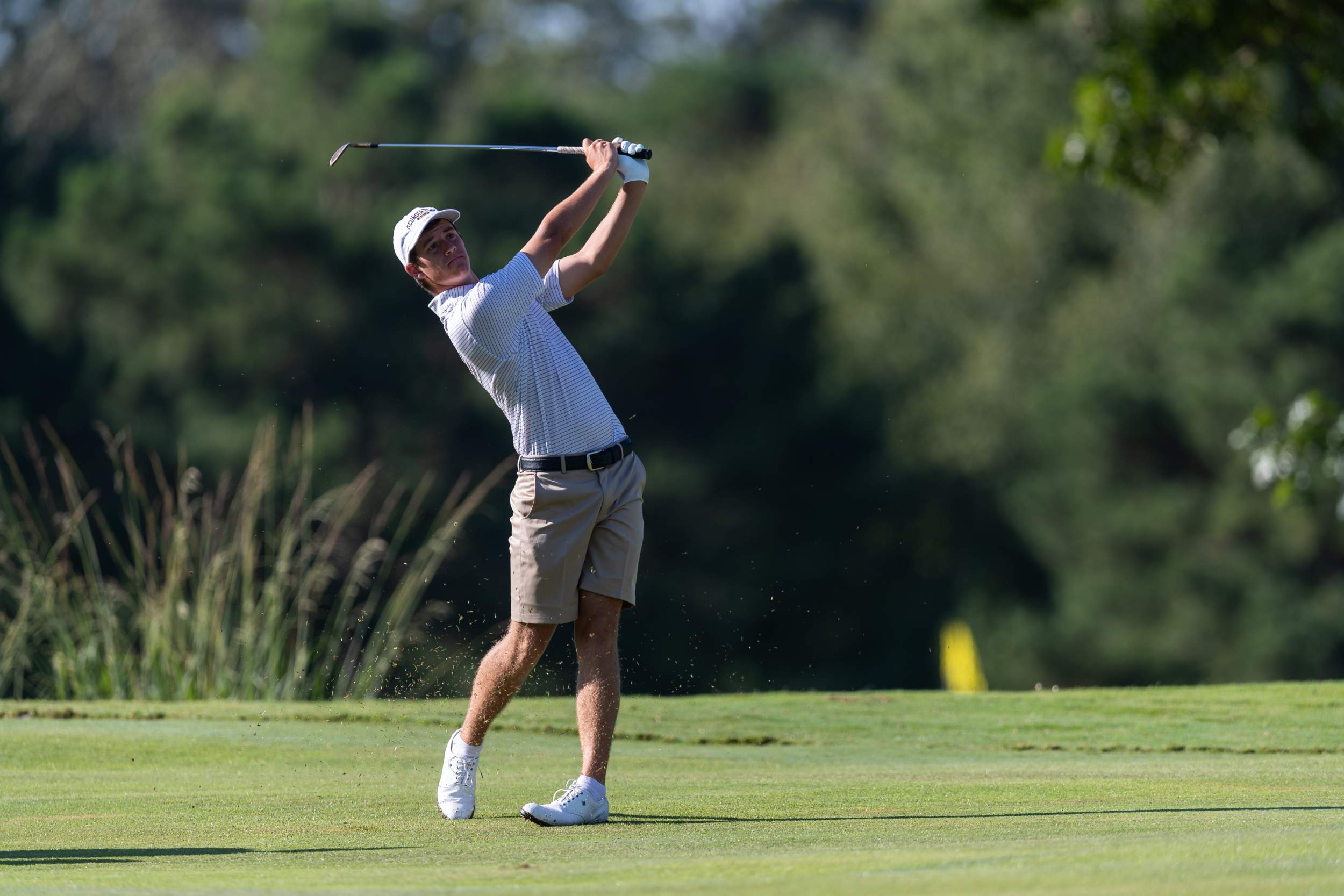 Noah Norton fired a 70 and is two shots back of the lead.

TEAM LEADERBOARD – Playing without All-American Andy Ogletree, who is in England this weekend representing the United States at the Walker Cup, Georgia Tech was the only team to post a subpar score Friday, getting as low at 6-under-par before finishing at 284 (-4). The Jackets hold a six-stroke advantage over North Florida (290, +2). The Ospreys played strong golf through 13 holes, getting to 11-under-par, but made just one birdie against 11 bogeys, three double bogeys and a triple bogey over their final five holes.

Seven players are tied for seventh place at even-par 72.

"If you look at the way some of those teams finished on the back, we handled those holes pretty well. We played those tough holes pretty even, and we had the right mindset so something good can happen at the end. Andy played 16 great holes, positive start for him. Noah hung in there until the end and made an eagle and great up and down on 18. Luke landed his second shot perfectly (at 18) and just a couple of hops and it went in. We had a North wind today, which make all the hard holes play into the wind. The golf course is probably the best we’ve ever seen it. The rough is up, the greens are great but very fast, so it’s a really good test." 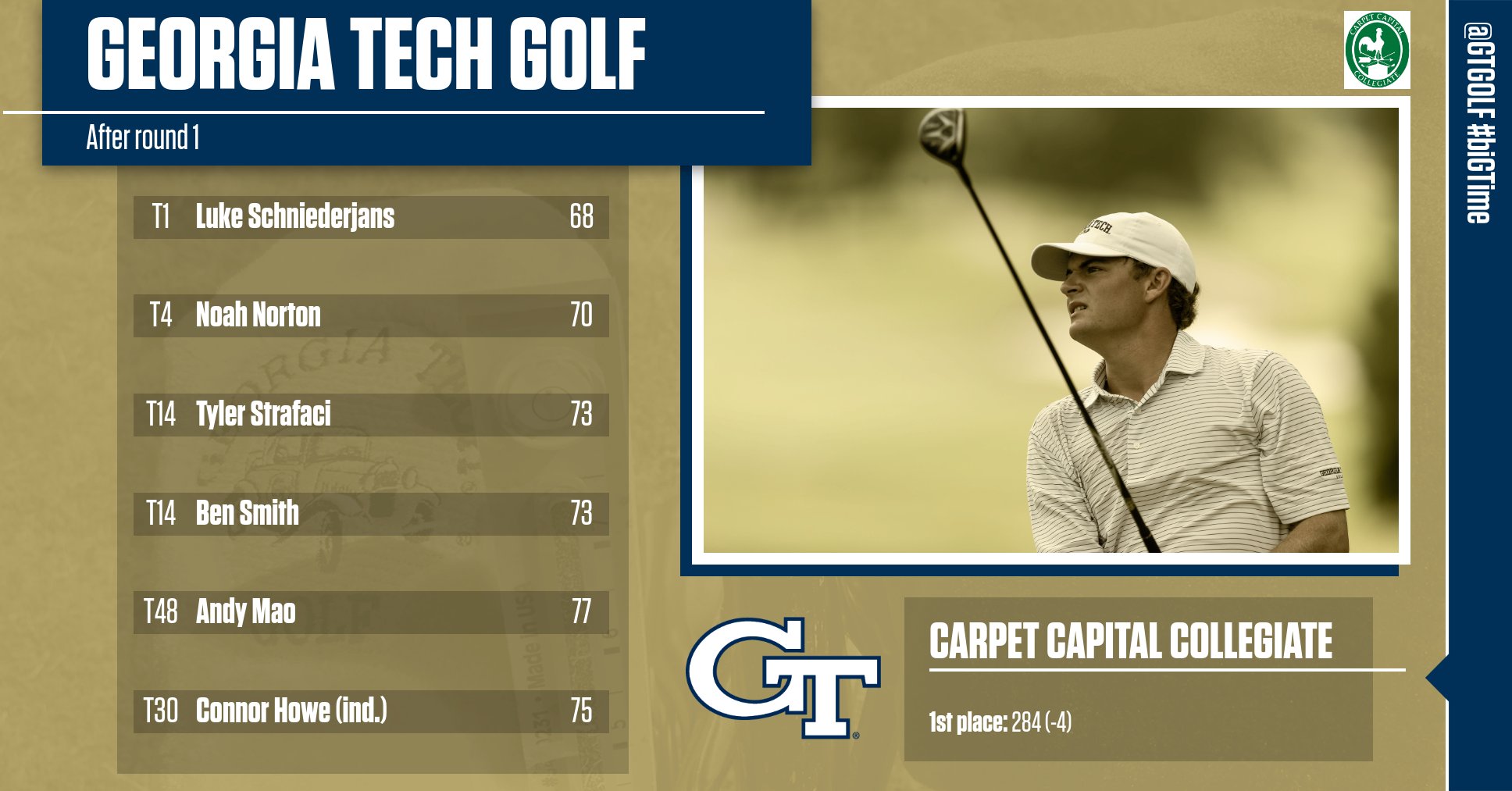 TOURNAMENT INFORMATION – The Carpet Capital Collegiate is being played through Sunday at The Farm Golf Club, a 7,180-yard, par 72 layout designed by Tom Fazio near Dalton, Ga. The Yellow Jackets have been the institutional host of this event since its inception in 1989, winning or sharing nine titles, most recently last fall with Tennessee. The 15-team field for this year’s event includes Clemson and Virginia from the Atlantic Coast Conference, as well as Auburn, Alabama, South Carolina and Tennessee from the Southeastern Conference.