Jackets in 9th Place at Golf Club of Georgia Collegiate

Alpharetta, Ga. – U.S. Amateur champion Andy Ogletree fired a 3-under-par 69 Friday, pacing No. 1 Georgia Tech to a 2-over-par score of 290 and ninth place following the first round of the Golf Club of Georgia Collegiate Invitational.

The 54-hole event runs through Sunday on the Lakeside Course at the Golf Club of Georgia in Alpharetta, and admission is free. Competition begins at 9 a.m. each morning.

TECH LINEUP – Other than an eagle from senior Luke Schniederjans (Powder Springs, Ga.) on the par-5 first holes and a 4-under-par front nine from Ogletree, the top-ranked Yellow Jackets struggled out of the gate Friday. But they picked up six birdies on the eighth and ninth holes, and three more at the 18th to finish at 2-over-par.

Ogletree, a senior from Little Rock, Miss., birdied five holes on the front side and recorded another at 18 in fashioning his 69. He is tied for seventh place individually, two shots off the lead.

Tech’s other counting scores came from senior Tyler Strafaci (Davie, Fla.), who carded a 73 and is tied for 33rd place, and junior Noah Norton (Chico, Calif.) and sophomore Connor Howe (Ogden Utah), each with 74s and tied for 43rd place. Schniederjans wound up with a 75 and did not count.

Among the five Yellow Jackets competing as individuals, sophomore Ben Smith (Novi, Mich.) led the way with a 73, tying for 33rd place, while freshmen Bartley Forrester (Gainesville, Fla.) and Andy Mao (Johns Creek, Ga.) each shot 74 and are tied for 43rd place.

Tyler Strafaci is tied for 33rd place after shooting 73.

TEAM LEADERBOARD – West Coast teams ruled the day Friday, with No. 9 Pepperdine opening a seven-stroke lead over Stanford. The Waves has four players under par for the round and posted a 12-under-par total of 276. Stanford finished at 5-under-par 283, paced by individual leader David Snyder at 67.

No. 10 Duke had three under-par rounds to grab third place at 4-under-par 284, while UCLA, with a pair of subpar rounds, and No. 13 North Carolina are tied for fourth place at 3-under-par 285. No. 16 Texas A&M is in sixth place at 286 (-2), with the remaining eight teams over par. Southern California and Wake Forest are tied for seventh place.

Ogletree is among four players at 3-under-par 69, tied for seventh place, and another five players finished their opening rounds at 2-under-par 70, tied for 11th.

Twenty-one of the 78 players in the field broke par on Friday. 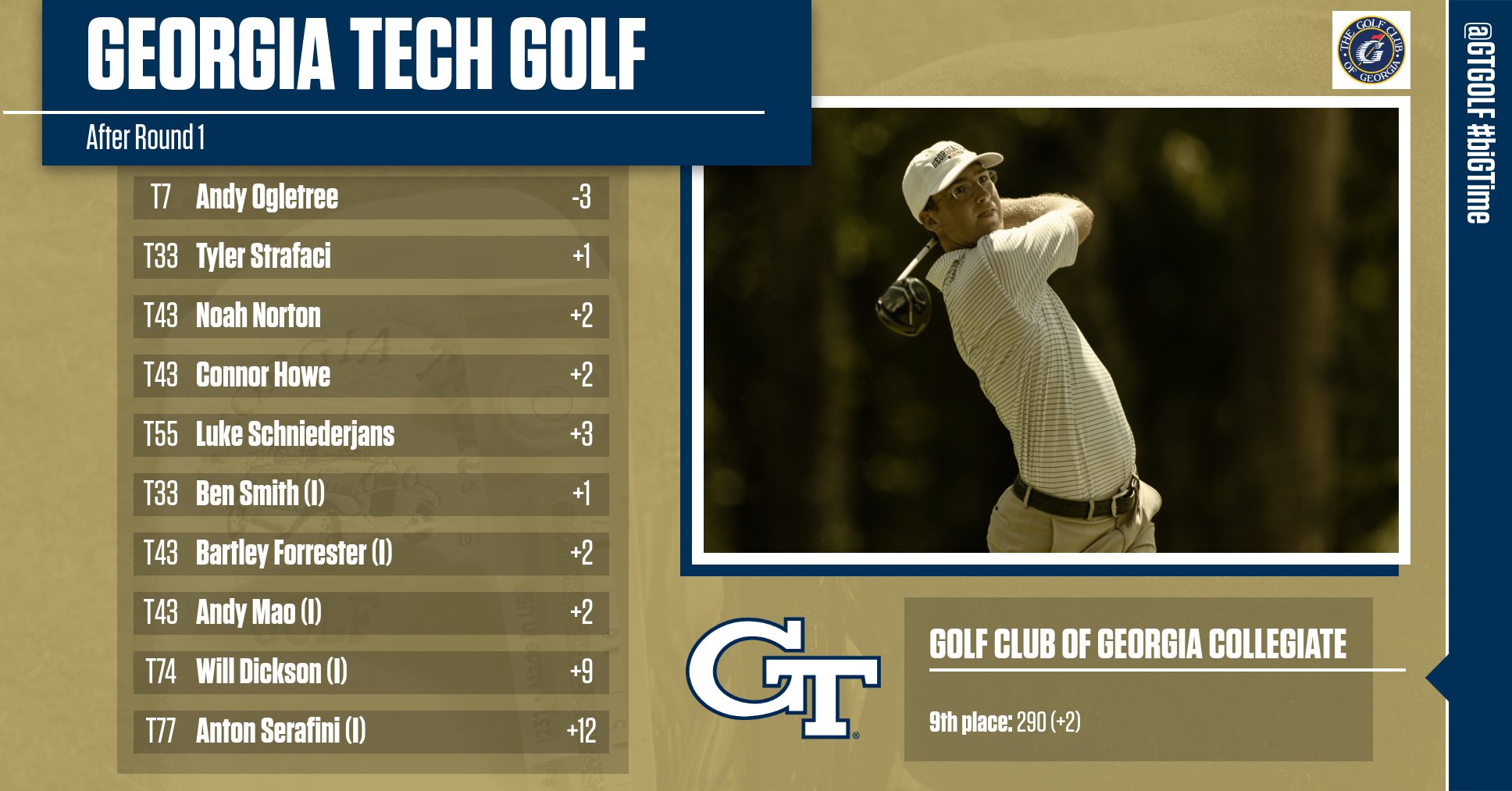 "Not as good a round as we would expect today with conditions being pretty good. We’re keyed up playing on our home course, which happens. As we know well, you’ve got to play, 1, 2, 3, 4 and 5 well, because it gets harder from there. We got off to a horrific start, and the back nine is hard, especially when the wind was blowing this afternoon. If you don’t get it done (on the early holes), it’s going to be a long day. Pepperdine had a great round, and if you look at their front nine, it’s good. We fought hard all day and made some birdies. Tomorrow is going to be a bear (weather-wise), so hopefully we can make up some ground."

The Yellow Jackets tied for third place last fall, and have finished out of the top five just twice in 12 years.