Inside The Chart: Ready To Fly

True story. It happened over the summer, before Georgia Tech’s OTAs, near the end of a conditioning session at the Brock Indoor Facility. Ben Wilhelm, Tech’s 6-5, 260-pound redshirt freshman tight end and a member of Brown’s workout cohort, challenged him to a showdown. Fifty yards, or somewhere in that vicinity.

Okay, so technically Brown gave Wilhelm a 10-yard head start. Initially it was five, but after Wilhelm took his stance, Brown, a former 10.4 100-meter runner in high school, didn’t sense much of a threat.

“I get a lot of requests [for races], but I haven’t really taken a lot because it’s more of a downfall for me,” the sophomore explained.

Yet even Brown, whose speed ranges somewhere between blazing and blinding, couldn’t make up the gap.

It may also be the only sprint Brown has ever lost at Georgia Tech. Since arriving on The Flats in January 2019, the 5-10, 170-pound slot receiver has become a field-stretching, DB-vaporizing weapon for the Yellow Jackets, blowing past expectations like they were a hapless, backpedaling cornerback. The Tampa, Fla., native led Tech with 21 receptions for 396 receiving yards in 2019. His seven touchdown catches tied him with Calvin Johnson for the most ever by a Tech freshman.

They were glossy numbers – and in the case of Johnson, esteemed company – but Brown knows he’ll no longer be overlooked.

That’s fine by him.

“I don’t feel any different. I go into the game with a lot of confidence in myself that no one can guard me.  Whether it happens or it doesn’t happen, I just keep my confidence up,” he said.

Even Brown’s recruitment went fast. When Geoff Collins brought his spread, pro-style system to Tech in December 2018, the Yellow Jackets’ head coach had to fill several position vacuums on his roster, slot receiver among them. Brown had recently de-committed from his previous school and wasn’t even considering Tech, but Collins sold him on the merits of his system and the strength of a Georgia Tech degree. Nine days after Collins was hired, Brown committed to the Jackets.

“It was a blur,” recalls Collins.

A blur that quickly became a boon to the Yellow Jackets. Brown started at slot receiver in Tech’s season opener versus No. 1 Clemson and hauled in a touchdown pass in the fourth quarter, becoming the first true freshman with a touchdown catch in his first career game since Kerry Watkins in 1999. He showed a knack for running underneath passes that seemed hopelessly overthrown, finishing with an average of 18.9 yards per catch. His speed numbers might have caused director of applied sports science Ryan Horton to think there was a glitch. Twice Brown topped 24 miles per hour in a practice. In seven games, he recorded a top speed of over 20 miles per hour.

“That doesn’t sound like a big deal, but it is when you’re not on kickoff or a gunner on punt,” Horton noted.

Yet as much pride as he takes in being a speed merchant, Brown doesn’t want speed alone to define him. In fact, as he trained this offseason, quickness actually took a backseat.

“I started to lift more. I started to work on my routes more, my hands – everything else besides speed,” he explained. “I know if I work on my other game, it’ll take it to the next level.” 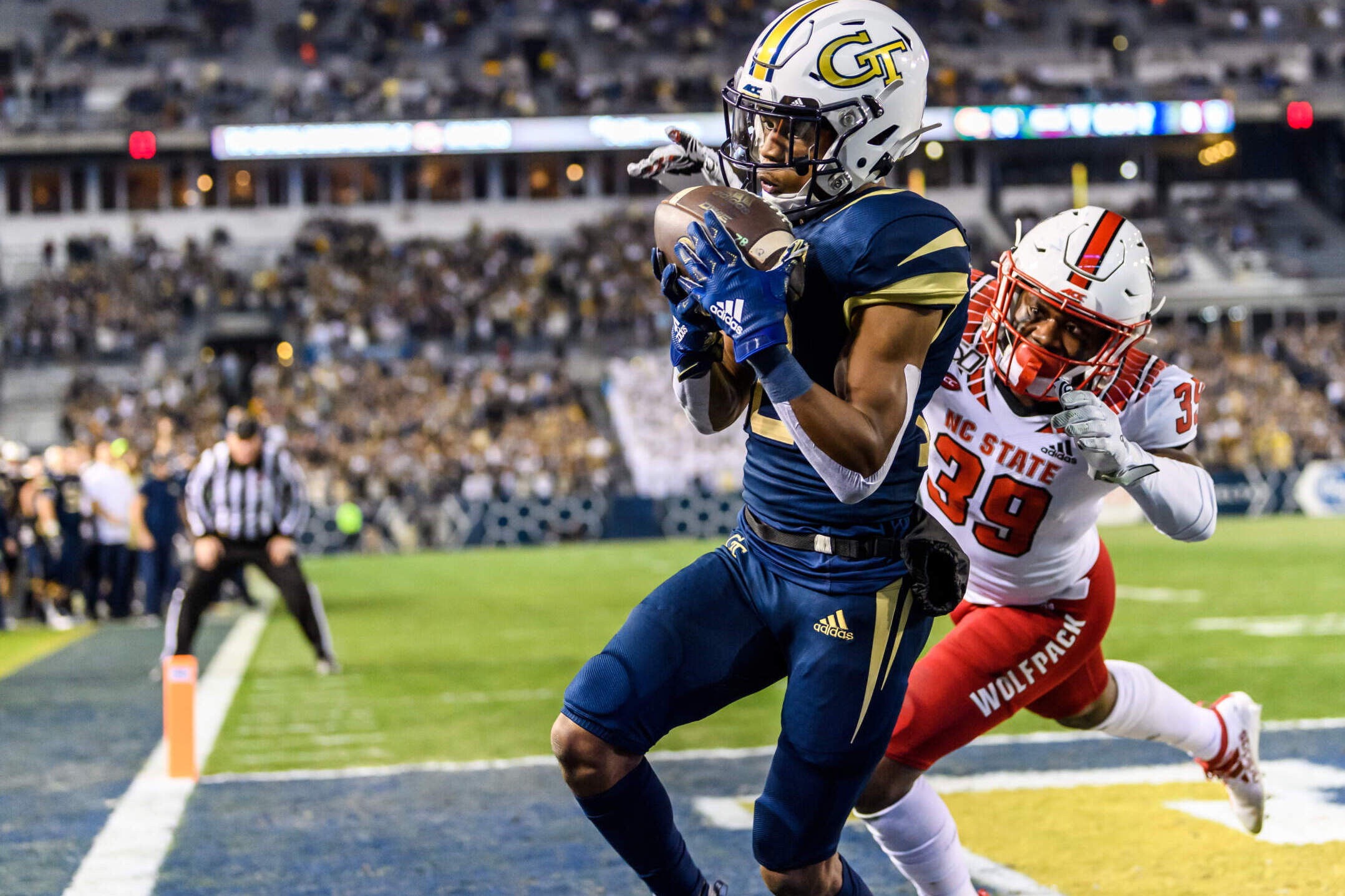 Brown added 15 pounds of muscle – a not-insignificant amount, considering his wispy frame – and begins the year weighing 170 pounds. He also heeded wide receivers coach Kerry Dixon’s calls to improve his hand strength. One of his favorite exercises was doing sets of “plate pinchers,” where he gripped a thick, 45-pound squat plate and repeatedly flipped it over in his hands.

“One of the things that we saw watching film was that contested catches was something he needed to work on – catching balls in traffic, and when somebody tries to knock your hands down, being able to secure the ball,” Dixon said.

“During practice and a lot of things we’ve done, I’ve made a lot of good, contested catches that maybe last year wouldn’t have happened,” Brown added.

He also wants to go from being a downfield threat to an all-field threat. Brown said he worked hard to refine his route running, knowing he needs to be a bigger factor in the Jackets’ intermediate passing game, a point of emphasis for offensive coordinator Dave Patenaude. He enjoys studying Green Bay Packers receiver Davante Adams for that very reason.

“Last year he ran a lot of ‘take-offs’ and corner balls and those vertical routes, but just the intermediate passing game, getting in and out of cuts, he’s done a really nice job with that piece of it. Understanding leverage, understanding the whole passing game – I’m really excited to see him play on Saturday,” Collins said on GT:60.

Brown will get his first opportunity in his home state when Georgia Tech takes on Florida State at Doak Campbell Stadium in Tallahassee (3:30 p.m. ET, Georgia Tech Sports Network from Learfield IMG College). With a stable of young quarterbacks, Brown knows the success of that group may only go so far as the reliability of their receivers.

The pressure won’t slow him down, he says. At this point, little has.

Said Brown: “We know what our goals are this season, and we’re ready to attack.”