Tech advanced to the championship finals with a 22-under-par score of 818 in the Pullman Regional, finishing behind Texas A&M, Brigham Young and Oklahoma. South Carolina was the fifth team to advance from that regional.

The Yellow Jackets are playing in the NCAA Championship for the 29th time in program history, for the 28th time since 1985, and for the first time since 2015. Tech is paired for the first two rounds (Friday and Saturday) of the 72-hole stroke-play portion of the championship with No. 8 Duke and No. 9 Southern California, teeing off at 2:05 p.m. Eastern time Friday and 8:45 a.m. Saturday. Pairings for the final two rounds Sunday and Monday will be based on team score.

The field will be cut to 15 teams for the final round of stroke play Monday, after which the individual champion will be crowned. The top eight teams will advance to the match play bracket, which will determine the team champion. Quarterfinal and semifinal matches take place Tuesday, May 28, followed by the championship match Wednesday, May 29.

TECH’S NCAA CHAMPIONSHIP HISTORY – Georgia Tech has reached the NCAA Championship finals 28 times since 1985 (29 times in program history), which is tied for fifth most in that time period behind Oklahoma State (34), Arizona State (32), Florida (31) and Texas (31). Tech has posted nine top-8 finishes in the last 14 tries.

In 2000, the Yellow Jackets rallied to tie Oklahoma State after 72 holes, but lost to the Cowboys on the first hole of a playoff. Tech and OSU matched the lowest 72-hole team score in NCAA Championship history (36-under-par 1,116) at the Grand National Lake Course in Opelika, Ala. In 2005, Tech finished 11 shots behind Georgia, and seven shots ahead of third-place Washington.

TEAM UPDATE – The Yellow Jackets stand No. 7 in the nation in the Golfstat, and No. 4 in the Golfweek/Sagarin rankings and No. 4 in the most recent Bushnell Coaches Poll. Tech has won six tournaments this year, one shy of the all-time high of seven won by the 2001-02 and 2013-14 teams and more than any other team in Division I golf except top-ranked Oklahoma State. (Golfstat rankings are used to seed the teams in the NCAA Championship and the regional qualifying tournaments.)

Tech advanced to the NCAA Championship by finishing fourth in the NCAA regional held in Pullman, Wash., behind Texas A&M, Brigham Young and Oklahoma. 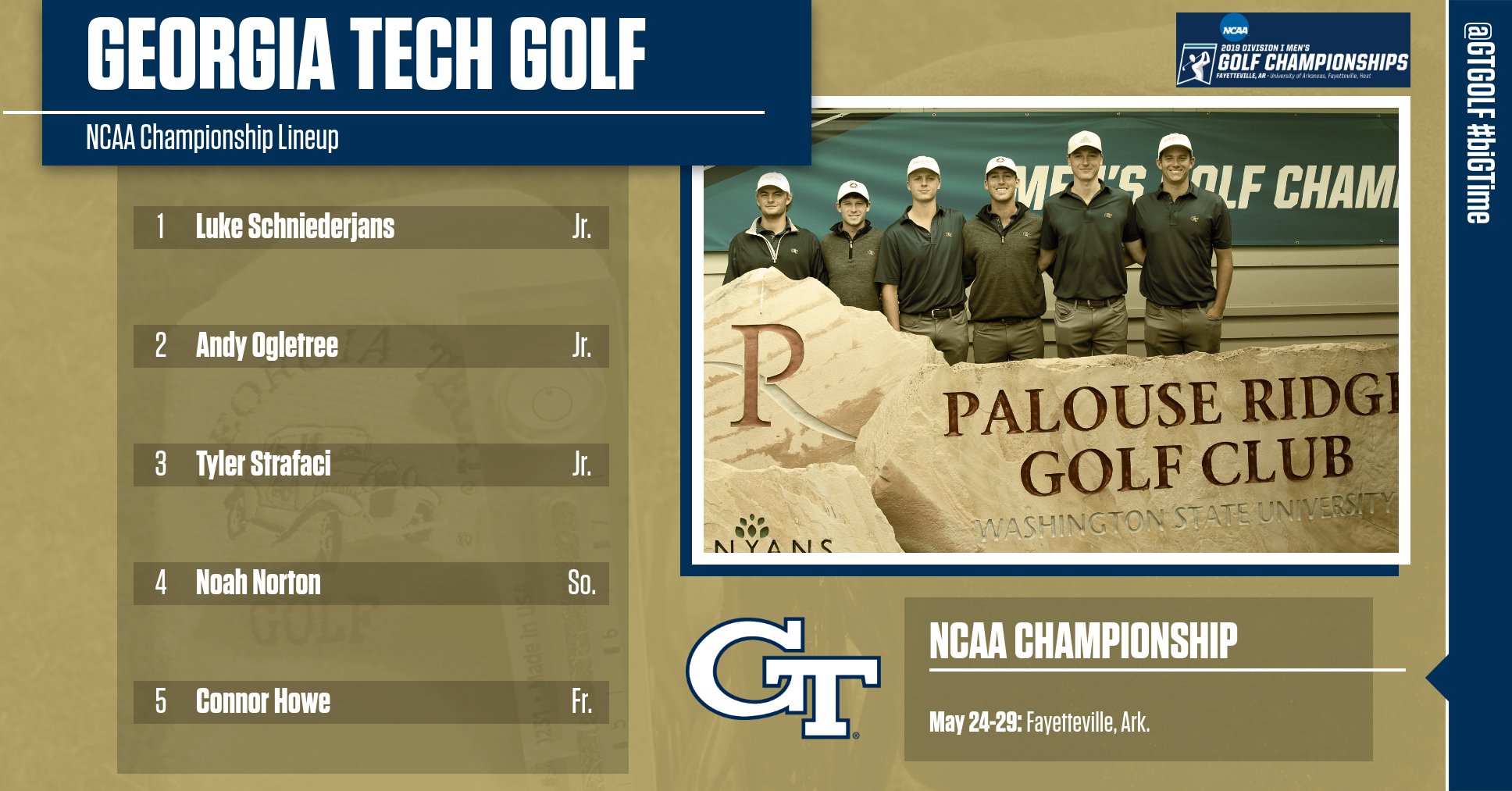 Four Yellow Jackets playing in the NCAA regional, each of whom have played all 11 team events this year, were selected to the All-Atlantic Coast Conference team and are ranked 81st or higher in the national Golfstat rankings. Ogletree (No. 18), who has been the Yellow Jackets’ top finisher in six of Tech’s seven spring events and has four top-10 finishes, including a runner-up performance at the ACC Championship, is the team’s highest ranked player, followed by Schniederjans (No. 26), Norton (No. 74) and Strafaci (No. 81).

They have combined for 16 top-10 finishes (Schniederjans has five, Ogletree and Strafaci each have four, Norton has three). They are separated by just over a stroke in stroke average, with Ogletree and Schniederjans leading the way at 69.71.

Ogletree tied for 12th place at the NCAA Pullman Regional to lead the Jackets, while Schniederjans tied for 17th.

Howe, with a 71.18 stroke average in 27 rounds, is playing in his seventh straight event as a counting member of the travel team, having tied for 14th place at the ACC Championship and 17th at the Pullman Regional.

TOURNAMENT INFORMATION – The NCAA Division I Men’s Golf Championship field includes 30 teams, five advancing from each of six regional qualifying tournaments that were contested May 13-15 around the United States, and six individuals, one qualifying from each of those regional sites.

Finals play consists of three days of stroke play on Friday, May 24 thru Sunday, May 26 (54 holes), after which the top 15 teams and nine individuals not on an advancing team will be determined. That is followed by a final day of 18 holes of stroke play on Monday, May 27 to determine the top eight teams that will advance to match play as well as the 72-hole individual champion. The team national champion will be determined by a match-play format that will consist of quarterfinals and semifinals conducted on Tuesday, May 28, followed by finals on Wednesday, May 29.

Noah Norton brings the music to the Yellow Jackets' practice round