Pairings and Live Scoring via Golfstat

THE FLATS  –  Making its final tuneup for the Atlantic Coast Conference Championship in two weeks, Georgia Tech’s 8th-ranked golf team returns to action this weekend by participating the fourth annual Clemson Invitational, which is being contested at The Cliffs at Keowee Falls in Salem, S.C.

TOURNAMENT INFORMATION – The Clemson Invitational is a 54-hole event, hosted by Clemson University, that begins Friday and runs through Sunday with 18 holes each day. It is played at The Cliffs at Keowee Falls, a 7,103-yard, par 72 layout in Salem, S.C. Competition begins at 1 p.m. Friday with a shotgun start.

TEAM UPDATE – The Yellow Jackets stand No. 8 in the nation in the Golfstat, and No. 10 in the Golfweek/Sagarin rankings and No. 8 in the Bushnell Coaches Poll. Tech, favored to win the Atlantic Coast Conference once again, has won three stroke play events this year, sharing titles at the Carpet Capital Collegiate and the Puerto Rico Classic, and won the Maui Jim Intercollegiate outright. Tech finished sixth at the Southern Highlands Collegiate after holding the 36-hole lead, and 12th in the Valspar Collegiate Invitational, both against extremely strong fields, in its last two outings. 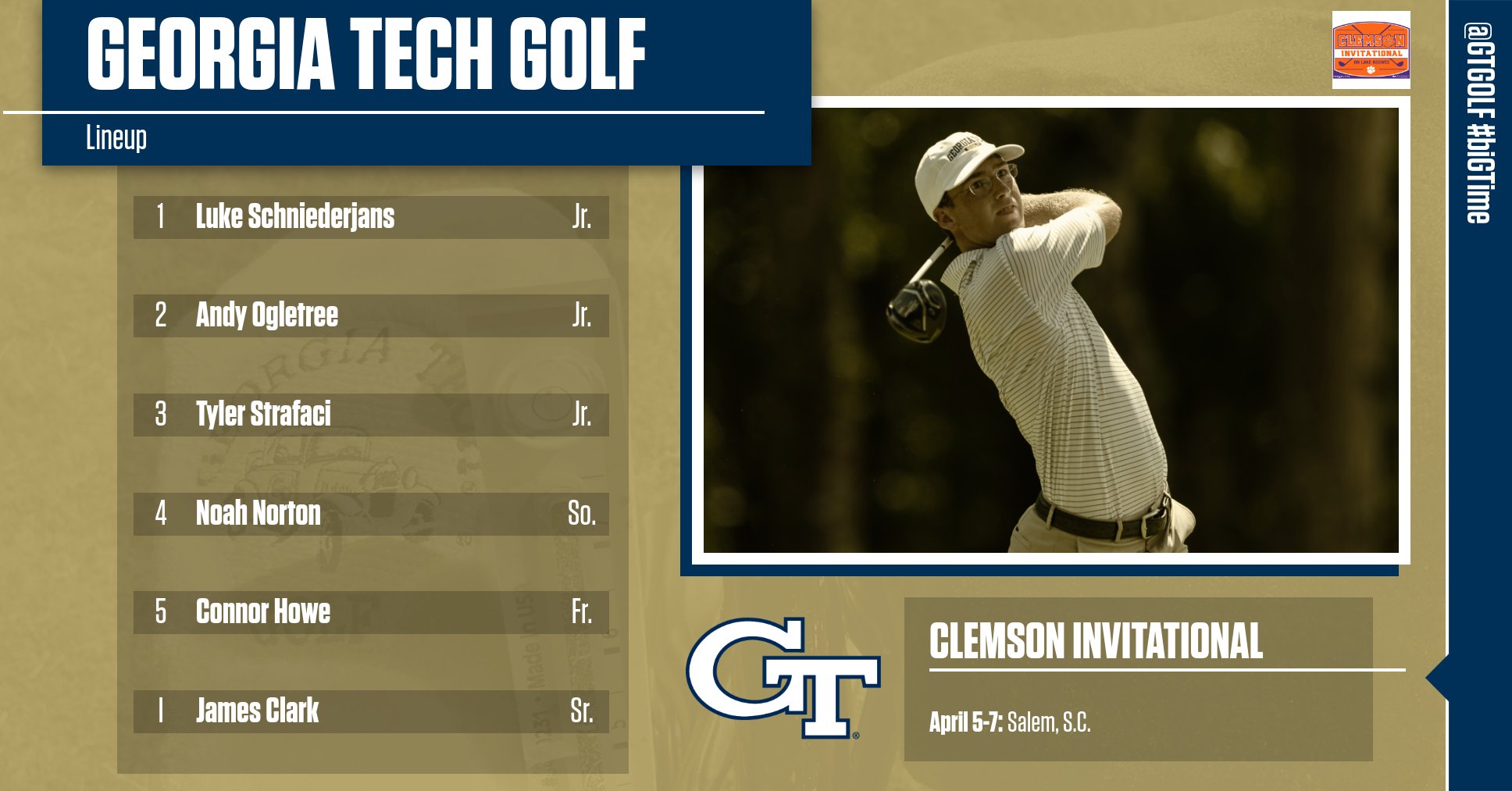 Four Yellow Jackets playing this week are ranked among the top 70 in the national Golfstat rankings, led by Ogletree (No. 32), who has been the Yellow Jackets’ top finisher in all four spring events. He is followed by Schniederjans (No. 38), Strafaci (No. 63) and Norton (No. 70). Those four have combined for 10 top-10 finishes (Schniederjans and Strafaci each have three, Ogletree and Norton each have two). They are separated by less than a stroke in stroke average, with Schniederjans leading the way at 70.43.

Freshman Connor Howe (Ogden, Utah), with a 72.78 stroke average in 18 rounds, is playing in his fourth straight event as a counting member of the travel team.

COACH BRUCE HEPPLER SAYS – “The dates for the tournament this year gave us a break in between it and the ACC Tournament, and the field is stronger than it was the first couple of times we played. It’s an easy place to get to, and it’s a more difficult version of the Old North State (site of the ACC Championship). The place is similar to what we’ll see at ACC’s and it’s a good opportunity to gather some momentum heading into the conference championship.”