Waikoloa, Hawai’i  – Tyler Strafaci held on to his lead in the medal race after posting a 67 Friday, and Andy Ogletree joined in with a 66 as third-ranked Georgia Tech shot 19-under-par and opened a five-stroke lead after 36 holes of the Amer Ari Invitational at the Waikoloa Resort.

Tech heads into Saturday’s final round, which begins at 12:30 p.m. Eastern time, looking for its fourth victory of the year and 10th in the last two.

TECH LINEUP – The Yellow Jackets could hardly have played better, with only one bogey and one double bogey the only blemishes on the cards of Tech’s four counting players over the 7,074-yard Kings Course at Waikoloa Resort. Tech’s score of 269 was its best since last spring’s Clemson Invitational.

Ogletree, the reigning U.S. Amateur champion, went bogey-free for the second straight day, pacing the Jackets on Friday with a 66 that included an eagle on the 327-yard, par-4 fifth hole. Coupled with his opening-round 68, the senior from Little Rock, Miss., is tied for third place individually at 10-under-par 134, three shots off the lead set by Strafaci.

Strafaci also avoided trouble Friday with an error-free 67 that included three birdies and an eagle on the 513-yard, par-5 fourth hole. At 13-under-par 131 for 36 holes, he has a two-shot lead over Oklahoma State’s Aman Gupta.

Junior Noah Norton (Chico, Calif.) cruised along bogey-free as well until carding a double-bogey at the par-4 17th, but rallied to birdie his final two holes and post a 68. He is tied for ninth place at 7-under-par 37. Sophomore Connor Howe (Ogden, Utah) fired a 68, with five birdies and one bogey, to provide the Jackets’ fourth counting score.

Senior Luke Schniederjans (Powder Springs, Ga.) struggled to a 77 in the second round Friday and did not count for Tech. Redshirt freshman Bartley Forrester (Gainesville, Ga.), playing as an individual, continued his solid play with a 1-under 71 Friday. 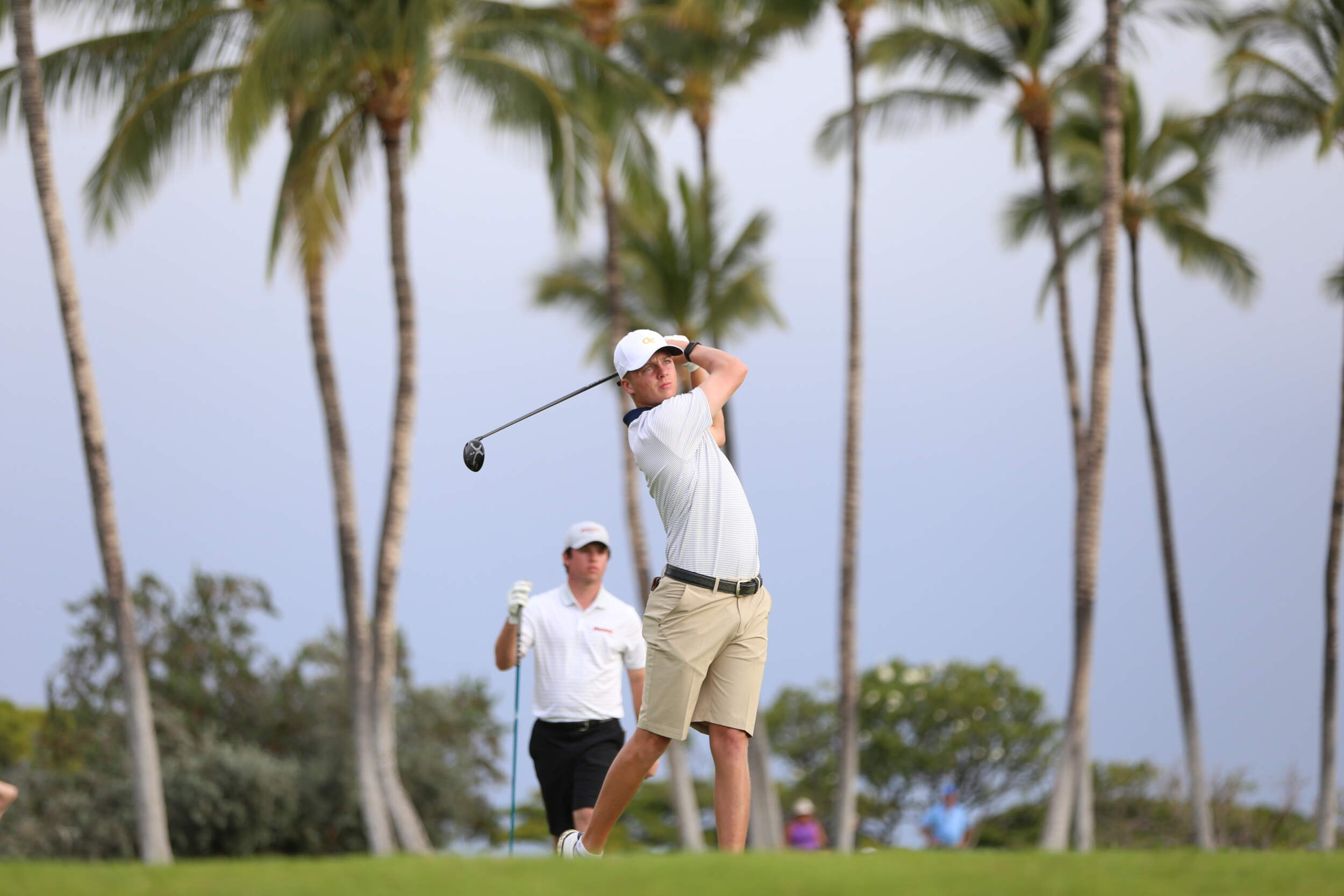 TEAM LEADERBOARD – Georgia Tech’s 19-under-par 269 is the fifth-lowest score ever shot in a single round in program history, and five of the top 13 rounds in the Tech record book have been shot in this event. The Yellow Jackets, at 33-under-par 543 after 36 holes, opened a five-stroke lead on 19th-ranked Texas, who shot 14-under-par 274 Friday and hold second place at 28-under-par 548.

Fifteen of the 20 teams in the field are under par through 36 holes.

INDIVIDUAL LEADERBOARD – Three Yellow Jackets are in the top 10 individually after 36 holes, with Strafaci at 13-under-par 131 with a two-shot lead over Oklahoma State’s Aman Gupta, whose second-round 68 left him at 11-under-par 133.

Ogletree, whose 66 was the low round of the day, is tied for third place at 10-under-par 134 with Pepperdine’s Sahith Theegala and Texas Tech’s Ludvig Aberg, both of whom shot 68 Friday. Three players – Auburn’s Jovan Rebula, Hawai’i’s Kotara Murata and Arizona State’s Blake Wagoner – are tied for sixth place at 8-under-par 136.

"We started on holes 1-2-3-4, and when you play it in the morning, that stretch is pretty gettable. I wasn’t sure we could beat our score from yesterday, but we continued to play well all the way around. It was nice to have Connor come in with a great round, and everybody contributed with some outstanding golf today."

TOURNAMENT INFORMATION – Georgia Tech is making its 22nd appearance in the Amer Ari Invitational, which has been the traditional spring opener for the Yellow Jackets every year since 1999, with one exception. The 29th annual event, which concludes Saturday, is a 54-hole, 5-count-4 stroke-play tournament played at the 7,074-yard, par 72 Kings Course at the Waikoloa Beach Resort on the Kona Coast of Hawai’i.