Watersound, Fla. – Sophomore Luka Karaulic, making his collegiate debut for No. 20 Georgia Tech, fired a 1-under-par 71 Sunday and paced the Yellow Jackets as they posted a 5-over-par 293 and stand in seventh place after the opening round at the Camp Creek Seminole Invitational.

TECH LINEUP – Karaulic, a Dacula, Ga., native in his third year in the Tech program, and Will Dickson, a senior from Providence, R.I., making his first start as a counting member in the Yellow Jackets’ lineup, led Tech in its first competitive round in nearly 10 months, both taking spots among the individual top 20.

Karaulic recorded three birdies and no bogeys on the back nine om the 7,159-yard Camp Creek Golf Club, and sits in a tie for 13th place after the opening round. Dickson birdied four holes on the back nine, five altogether, to offset three bogeys and a double bogey for an even-par 72, good for a tie for 18th place.

Sophomore Andy Mao (Johns Creek, Ga.), with an opening 74 in just his third collegiate event, and junior Connor Howe (Ogden, Utah), who posted a 76, were the other counters for the Yellow Jackets.

Sophomore Bartley Forrester (Gainesville, Ga.), making his third career start for the Jackets, took a pair of double bogeys on par 5s and posted an 80. Junior Ben Smith (Novi, Mich.), competing as an individual, is tied for 33rd after carding a 74. 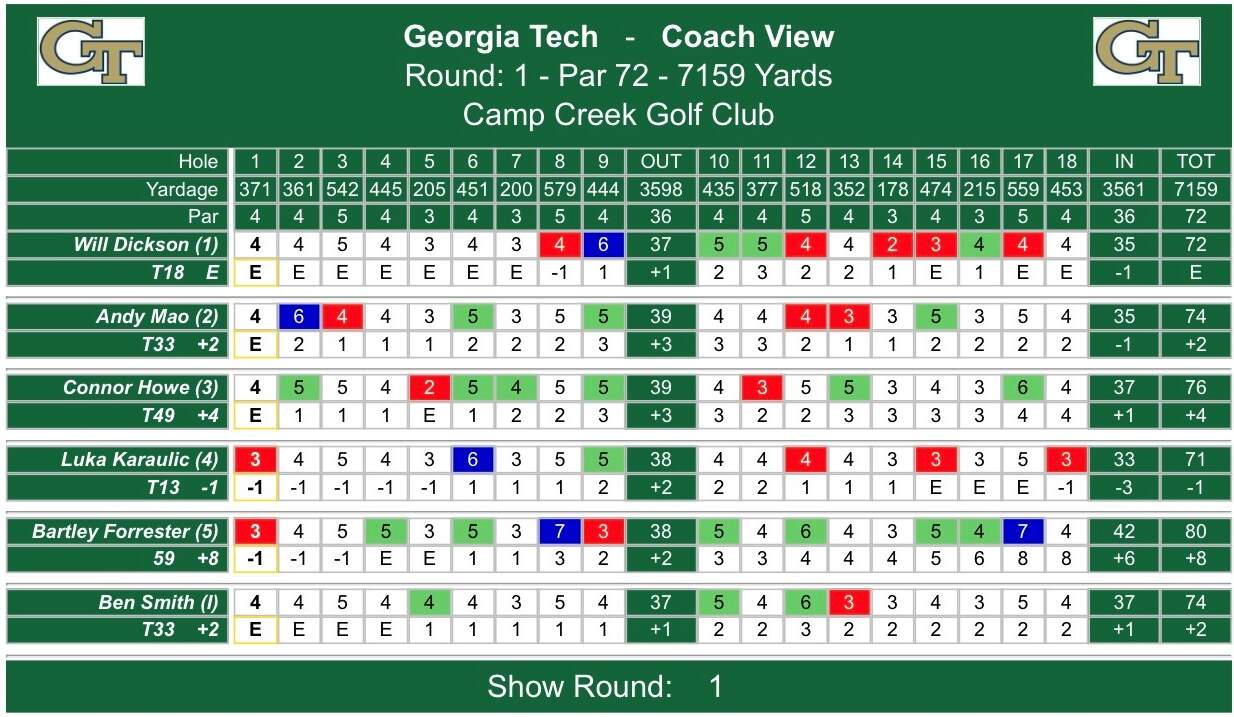 TEAM LEADERBOARD – No. 25 Clemson broke out to a six-stroke lead Sunday with the help of three subpar rounds, posting a 12-under-par 276, with No. 17 Wake Forest in second place at 6-under-par 282 behind a pair of 67s. Duke and host Florida State were the only other teams to record under-par scores Sunday, the Blue Devils taking third place with a 5-under-par 283, and the Seminoles in fourth position after a 3-under-par 285.

North Carolina’s Peter Fountain is along in fifth place following his 4-under-par 68, while Clemson’s Colby Patton and Kyle Cottam are part of a five-player tie for sixth at 3-under-par 69.

Seventeen of the 60 competitors in the field broke par Sunday.

"We’ve got a young lineup here playing their first competitive round together. Our practice round was tremendous, but when the gun went off we didn’t play as well. We played a lot better on the back, and Luka and Will gave us a couple of good rounds, so hopefully we’ll be more comfortable tomorrow."