Perry Adair (1899-1953) was an integral part of the “Golden Age of Golf.” He grew up in Georgia and loved the game, playing at the Atlanta Athletic Club’s East Lake Golf Course, mentored by selfless East Lake club pro Stewart Maiden, who brought with him from Carnoustie, Scotland the knowledge of what it was like to play for national championships. Perry’s father George Adair was instrumental in Perry’s early career development and took the boy off to compete in tournaments where he had to face new conditions and adult competition. He thrived on it.

He was already a celebrity in the golf world when he enrolled at Georgia Tech in 1917 and played No. 1 for the Yellow Jackets before enlisting in Army Artillery School. After his military stint, he joined his family’s real estate development firm and also involved himself in efforts to build municipal golf courses in the Atlanta area. 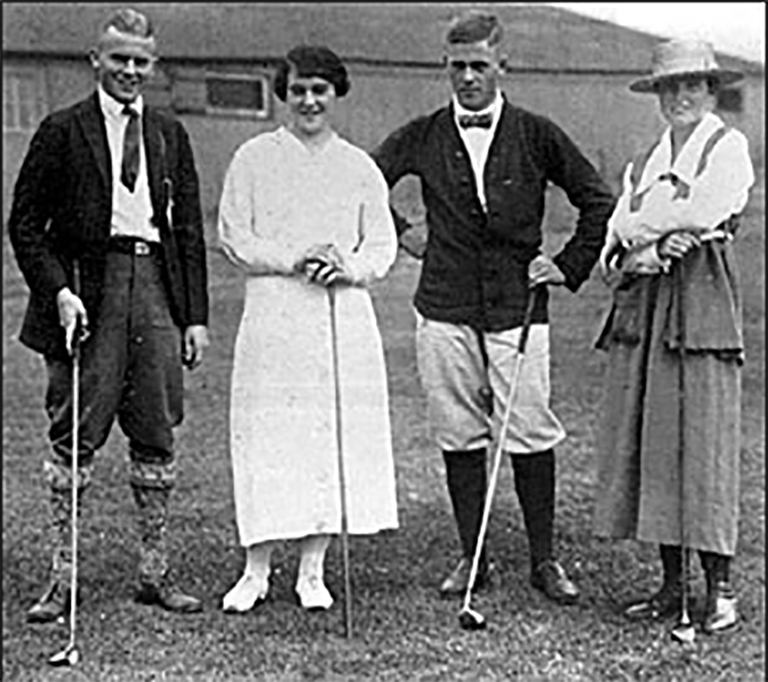 Among the fund-raising tours by professional and amateur golfers for the war effort in 1918, Adair toured the East Coast and the Midwest as part of the “The Dixie Whiz Kids,” playing in exhibition matches featuring fellow Atlanta teenagers Watts Gunn, Bobby Jones and Alexa Stirling, and Chicagoan Elaine Rosenthal, raising $150,000 for the Red Cross. While playing the Midwest, these famous teens were often joined by pros Chick Evans and Walter Hagen. 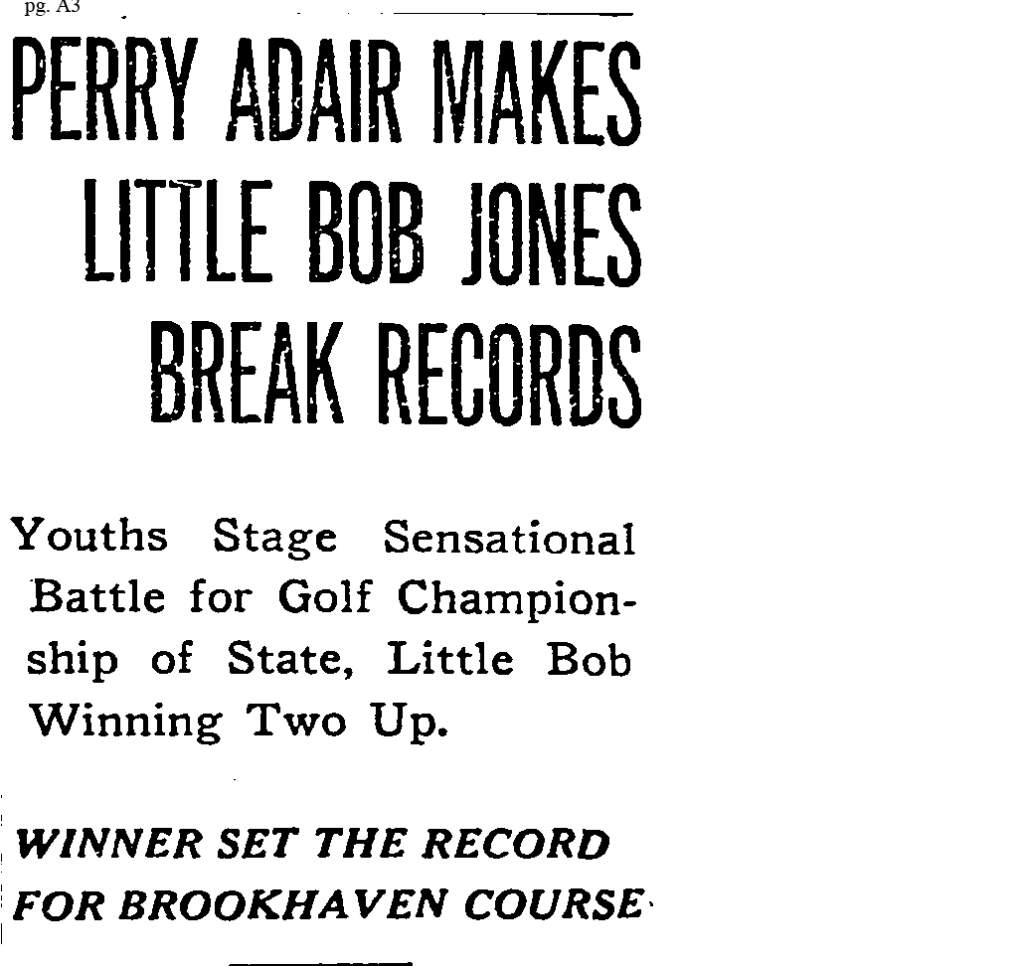 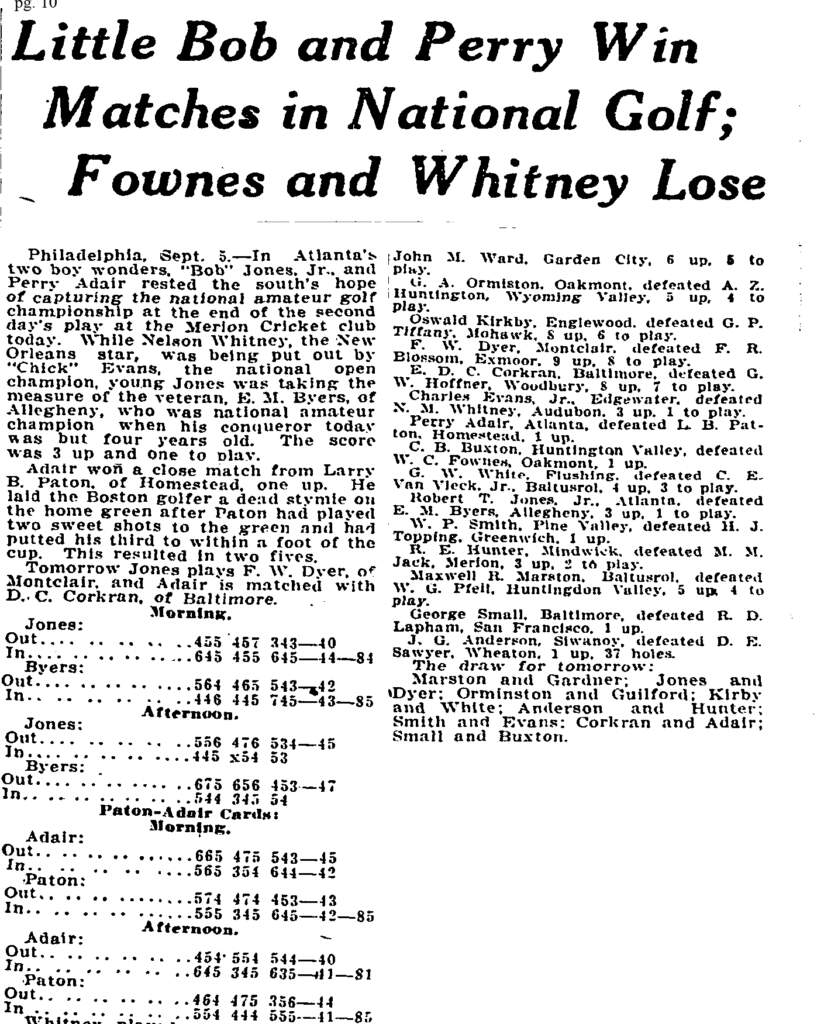 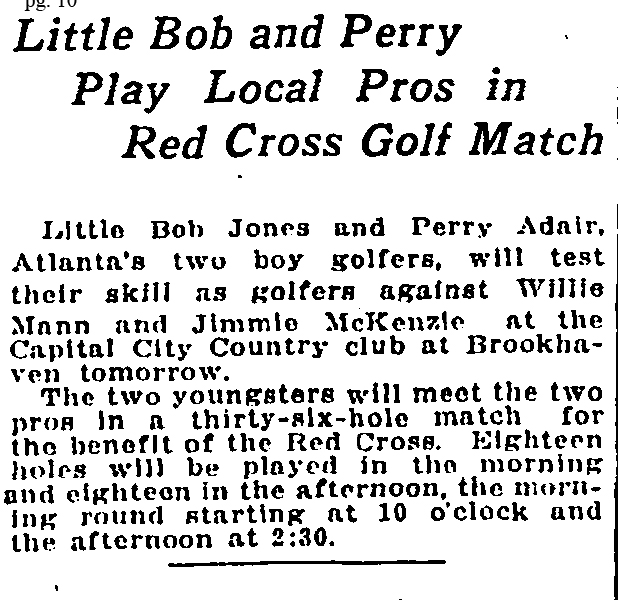 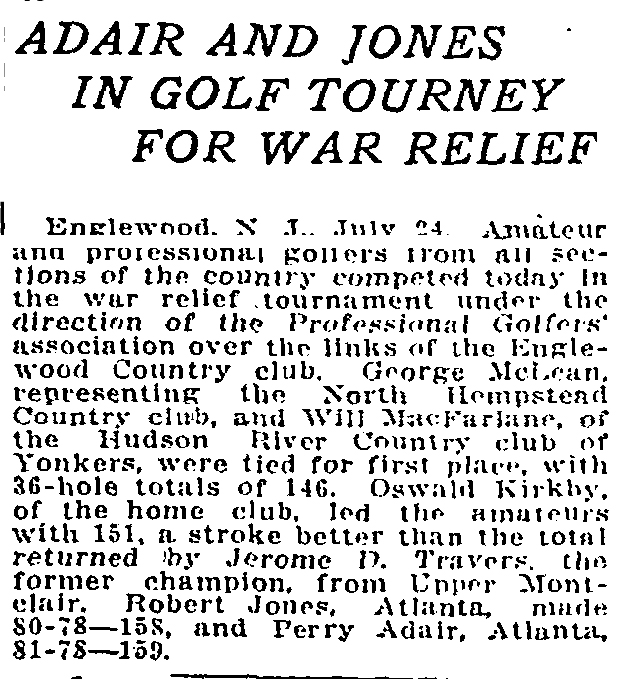 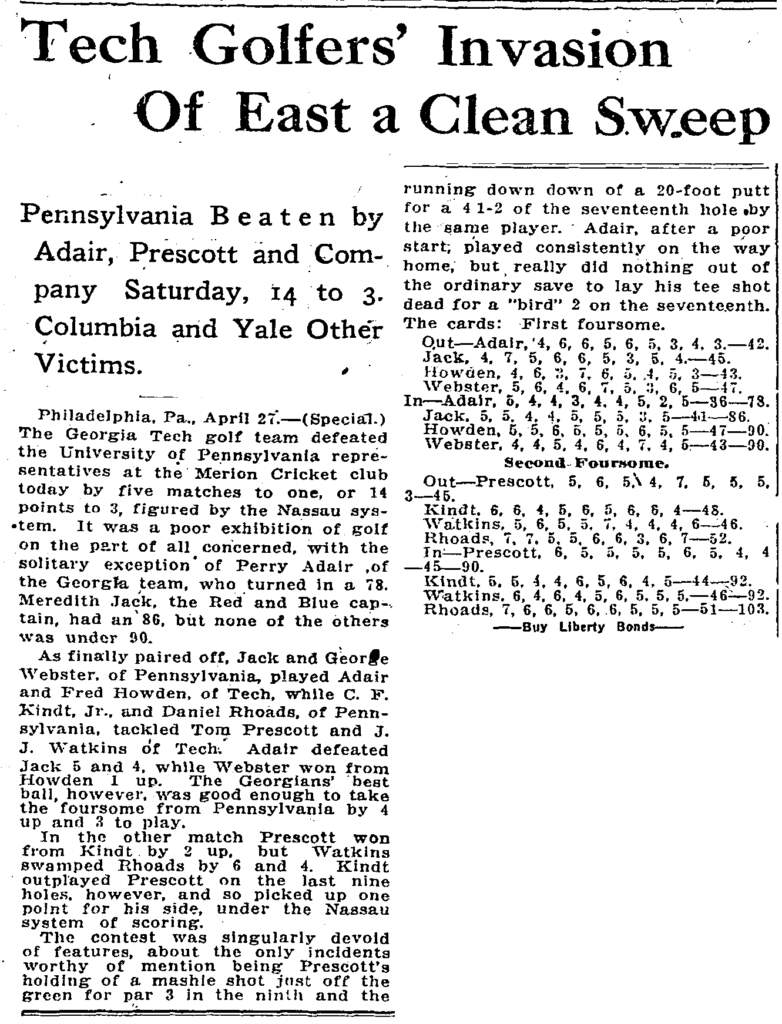 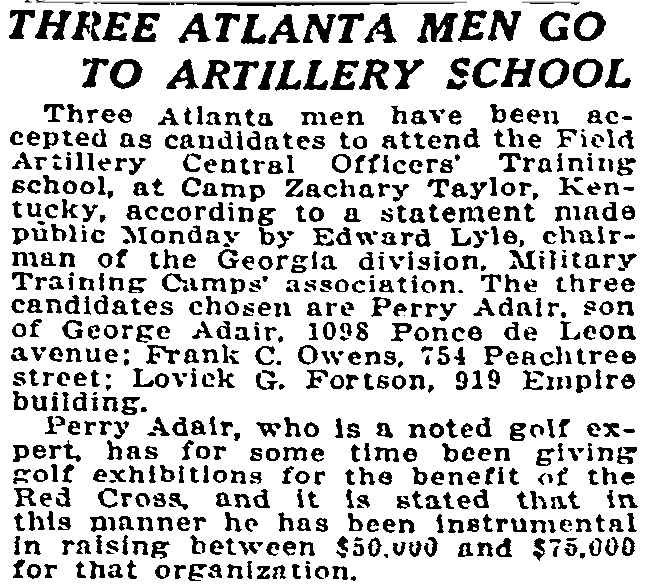 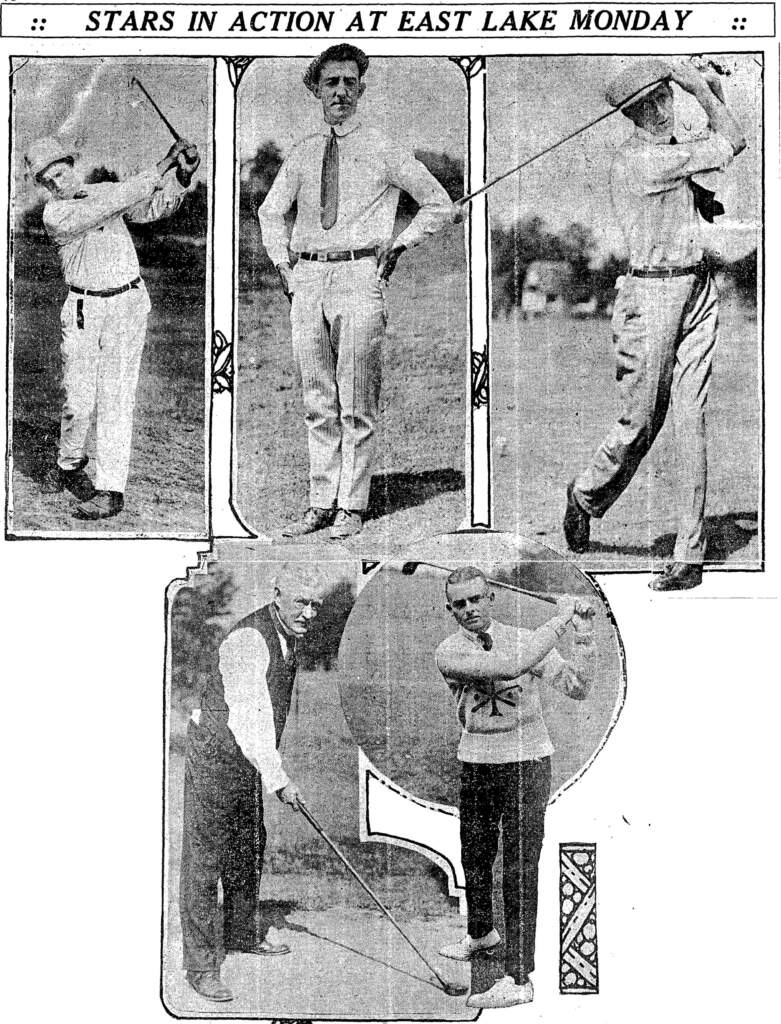 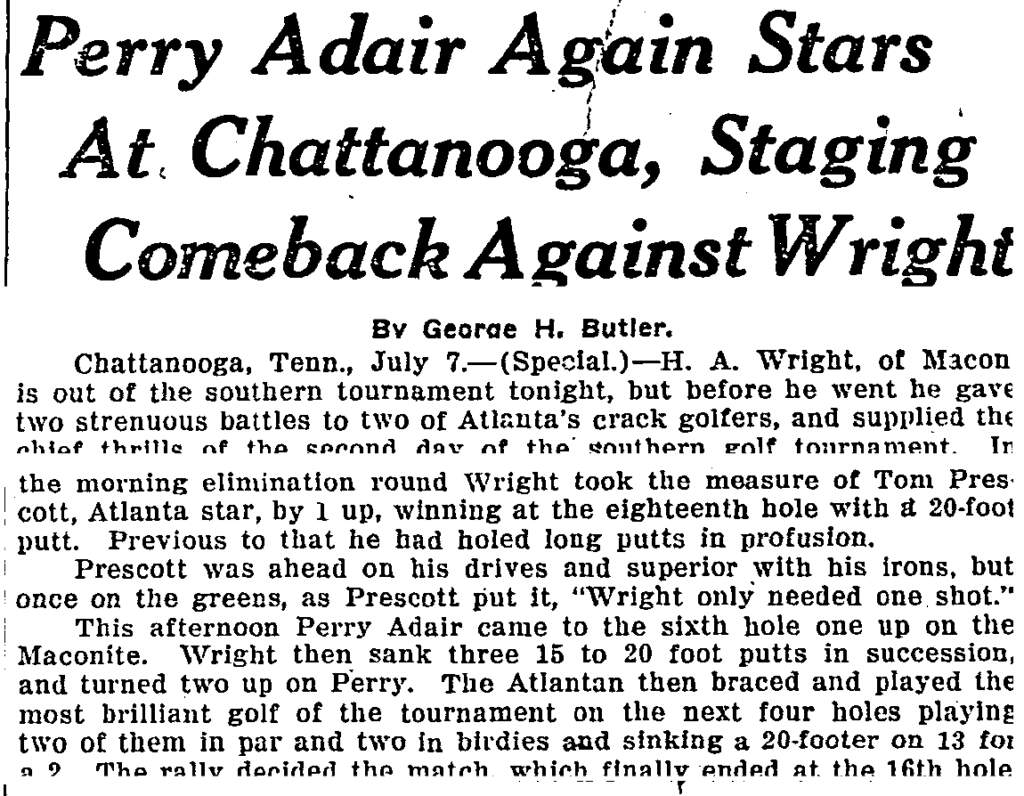 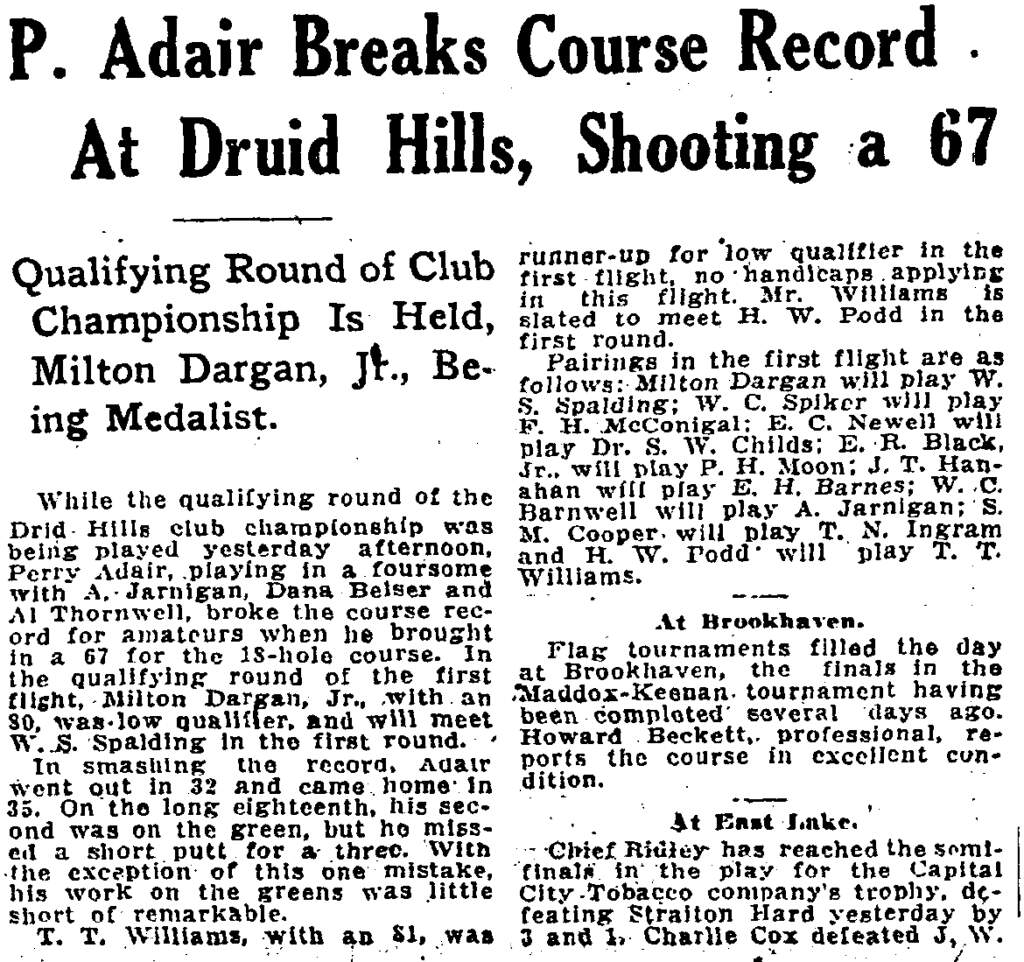 Chick Evans wrote of Adair in the Atlanta Constitution in 1920:

“Perry Adair, of Atlanta, is a promising youngster who will be heard from. He is not so stocky or so strong of build at his young neighbor Bobby Jones, but he plays a sound game and within the limitation of his strength he is an excellent golfer. It is more than an unique coincidence that the two foremost young players in the United States should be from the same Southern city … The golf instructor, James Maiden, at the East Lake course, where young Adair was practically brought up, was one of the best in the country and the Atlanta boys have had the soundest possible golf schooling … Perry, like the great British players, has golfed almost from babyhood. He is a very graceful player, and one of the best of his age in this country today. He does not drive so far now as he will when he is able to collect a bit more flesh, but even now his drives are of good length and considerable accuracy.”