The following story appeared in the Fall 2020 issue of Everyday Champions magazine. To read the entire magazine and also the current issue, click here.

Stewart Cink is a golfing immortal.

His bio includes a major championship title, two national college player of the year awards, PGA Tour Rookie of the Year honors, a 40-plus week run in the top-10 of the World Golf Rankings and seven professional victories.

In September, the now 47-year-old ended an 11-year PGA Tour winless streak by capturing the Safeway Open. As of Oct. 11, he had four top-25 finishes in his previous 17 starts and made the cut in 14. Every bit as dedicated off the course as on, Cink has been honored in recent years by receiving the Payne Stewart Award by the PGA Tour and the Silver Anniversary Award by the NCAA, both honors recognizing his work in the community as much as for his excellence in golf.

Like Toby Keith, he’s not as good as he once was, but he’s as good once as he ever was. Or once in a while. He credits a deep love for the game and for competition for his success.

Cink’s passion took root in his years at Georgia Tech. The 1995 graduate recently shared insights on college, golf and life with Everyday Champions.

EC: You were an accomplished junior player and a heralded recruit coming out of high school in Florence, Ala. What contributed to the elevation of your game once you arrived at Georgia Tech?

Cink: “That’s an easy one to answer — David Duval. He was the No. 1 player in college golf, and he was two years ahead of me. Our coach, Puggy Blackmon, was always telling me to ‘get in his back pocket.’ By that he meant for me to follow Duval around and figure out what separates him from everyone else. I knew I was a good golfer, but I went from being the big fish in a small pond to being the smallest fish in an ocean. Thanks to Duval, I found my way.

EC: How did David Duval take to that role? Did he enjoy it?

Cink: “I say this with nothing but love for him in my heart, but Duval was a crappy mentor. He didn’t go out of his way to teach us. But he would let us learn from him. Lots of times it was through him beating your butt. I can remember being in many a side match with him and having to pay out. No, he wasn’t very open to mentoring. Golf is a singular type sport in that way. But he understood the situation and why Puggy wanted him to be that role model for the younger players. He led by example.”

EC: You pretty much assumed Duval’s crown once his college career ended. Did you like playing the mentor?

Cink: “Oh yeah, it was a source of pride for me to know Puggy was telling all the freshmen to ‘get in Stewart’s pocket.’ I enjoyed the role and sharing my knowledge — I still do. And for me, mentoring translated to better scores on the course just because it affirmed my belief in myself. Belief is what separates the good pro golfers from the average ones. Having those underclassmen look to me as an example really meant a lot to my confidence.” 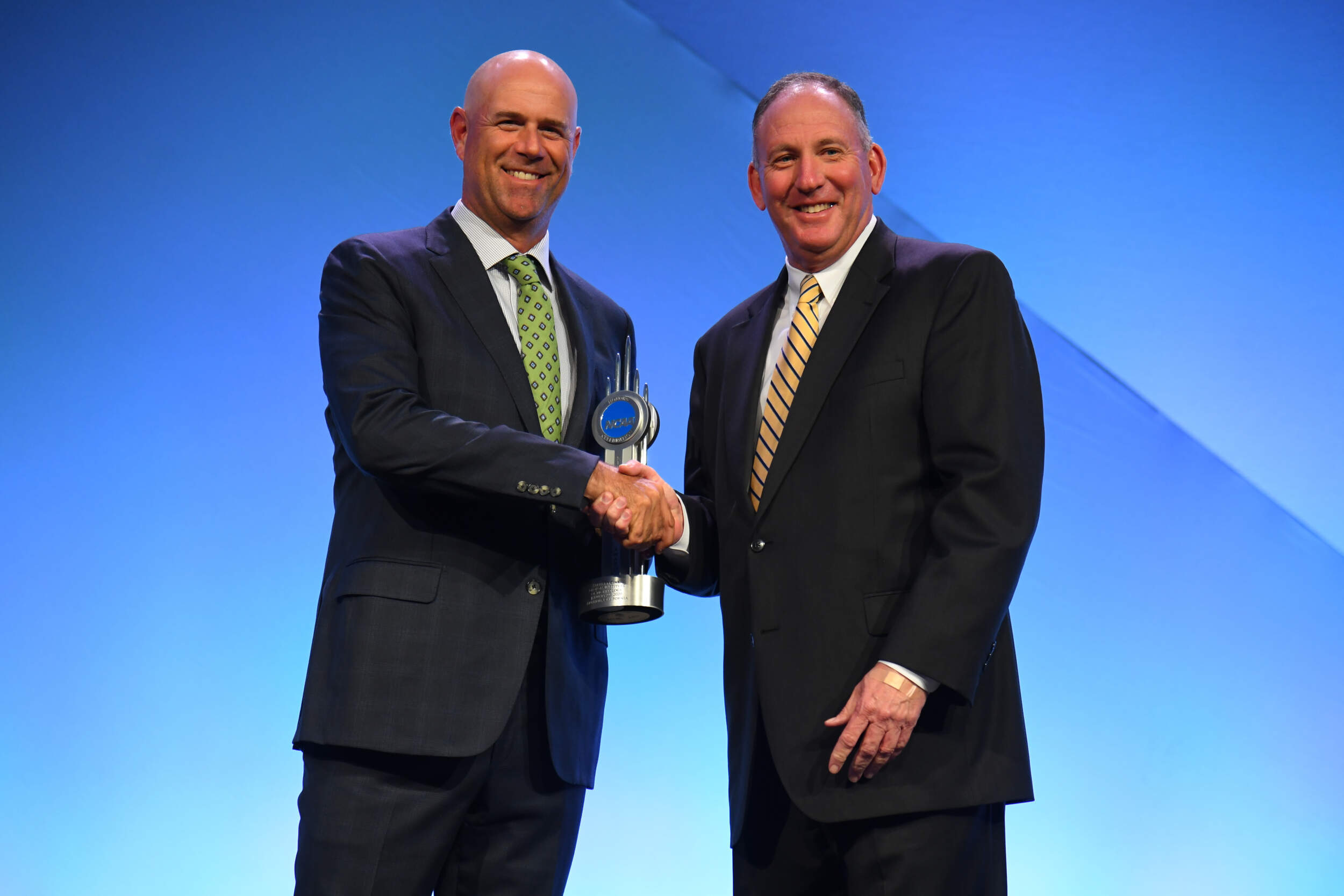 Cink was honored in 2019 with the NCAA’s Silver Anniversary Award.

EC: Away from the golf program, what did your Georgia Tech experience instill in you that you’ve applied throughout your life?

Cink: “Tech’s not easy. It throws a lot of stuff your way that you just aren’t prepared for. Academically, it forces you to deal with situations that just aren’t fair and teaches you to handle those kinds of moments in your life. As an adult, you feel like things aren’t fair all the time, right? Tech is not a school where you can get through by regurgitation. You aren’t going to take a test where all that is required is for you to fill out some answers you memorized and get an A-plus. You learn to apply things and compete. It’s just a highly competitive environment.”

EC: Your PGA Tour career has been marked by sustained success. You just won a tournament at age 47. What is the key to longevity in golf?

Cink: “You have to realize and accept that you shouldn’t expect to be competitive every time you go out, because the fields are just too deep. Even the best players in the world are going to throw in missed cuts here and there. I have had a long span of mostly good results, and that’s the way you have to manage your golf career. It’s not how you played at one tourney, but how you’ve played over the last 100 tourneys.

“The intangible for me is I just really love playing, yet I really hate playing bad. I love the challenge of playing and practicing and getting a little bit better. Without that passion for it, I would not have seen this career stretch this long.” 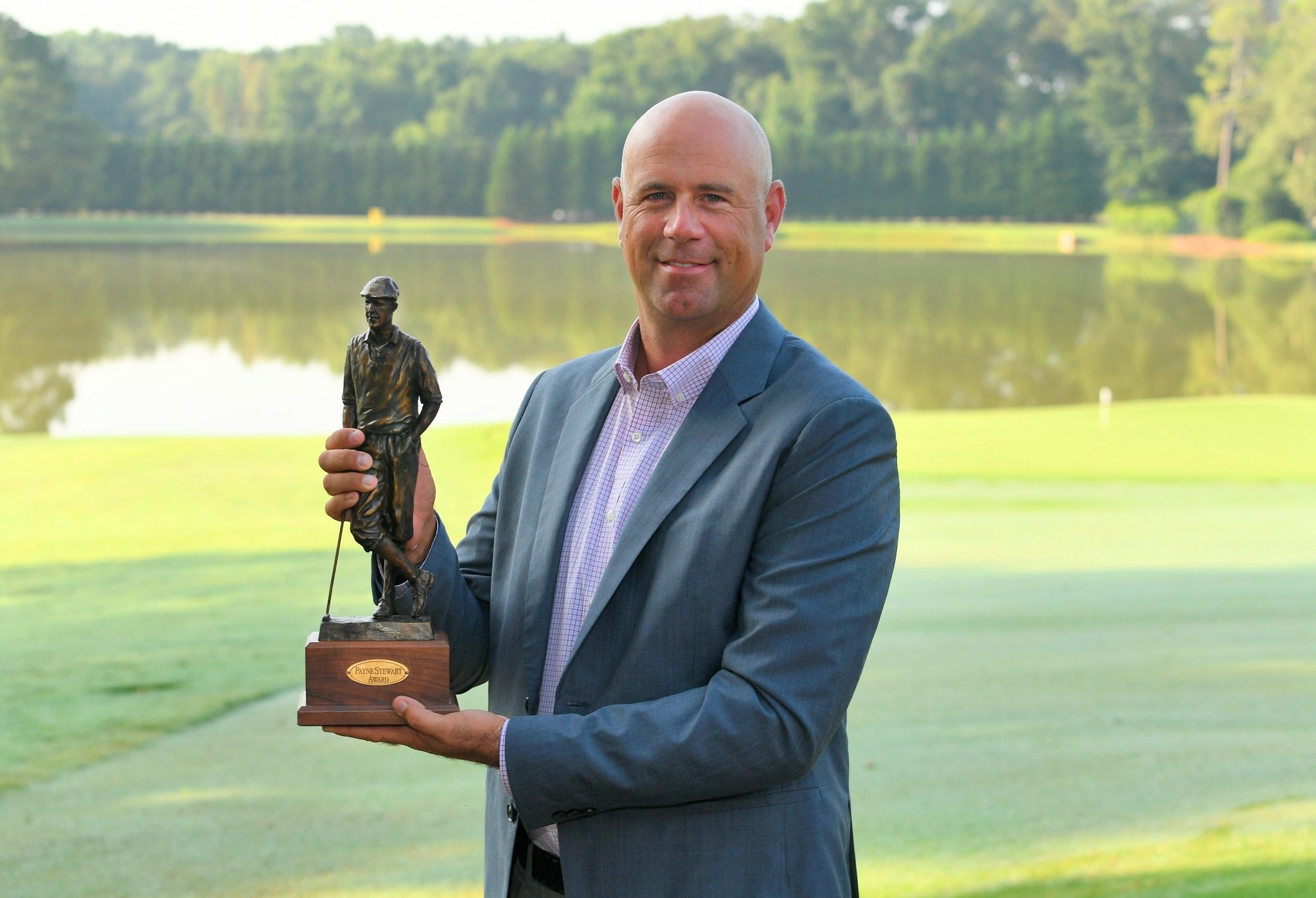 The PGA Tour bestowed its Payne Stewart Award on Cink in 2017 for his many contributions and service to the community.

EC: Looking back, what are the highlights of your golf career?

Cink: “I have three favorites: The British Open win in 2009; the 2013 PNC father-son tournament I won with my son Connor; and the recent win at the Safeway when my other son Reagan caddied for me. So a major championship and two on-the-course experiences that end with victories with one of my sons. I may be the only golfer in history to do that. Jack Nicklaus might have, too, but then that’s good company.”

EC: Speaking of the Safeway win, that snapped a long drought for you. Does that alter your thinking in terms of your future as a player? You’re not far from Champions Tour eligibility.

Cink: “Before the win at Safeway, I would have said I’ll never think ahead to the senior tour because once I do, that mindset will be the end of my PGA Tour career. But by winning Safeway, I am now exempt on the PGA Tour right up to my 50th birthday, so I don’t have to sweat whether I have a spot in the next tournament or not. So now I can just transition when it’s time. I’d rather stay on the PGA Tour as long as I can.”

EC: Your pro success has given you the means to give back financially to many causes, including the Georgia Tech golf program. You gave generously in the creation of the Noonan Golf Facility, which opened in 2017. How special is your continued relationship with your alma mater to you?

Cink: “When the COVID-19 pandemic hit and everything shut down, I got involved in helping put together a series of events for players looking to play. I got to spend some time with many of the Georgia Tech players during that time, and I really enjoy that closer connection. I was able to share so much of what I have learned over the years with them. Experience is a hard-knocks thing, but it doesn’t have to be. I enjoyed the opportunity to help them become better players so Tech golfers can succeed. And I love the practice facility. We’re moving to a condo down near there, and there’s no place for me to keep my smokers so I’m going to leave one over at the golf facility. I’m going to do some cooking down there, and smoking is a slow process, so I’ll be spending plenty of time around the team.” 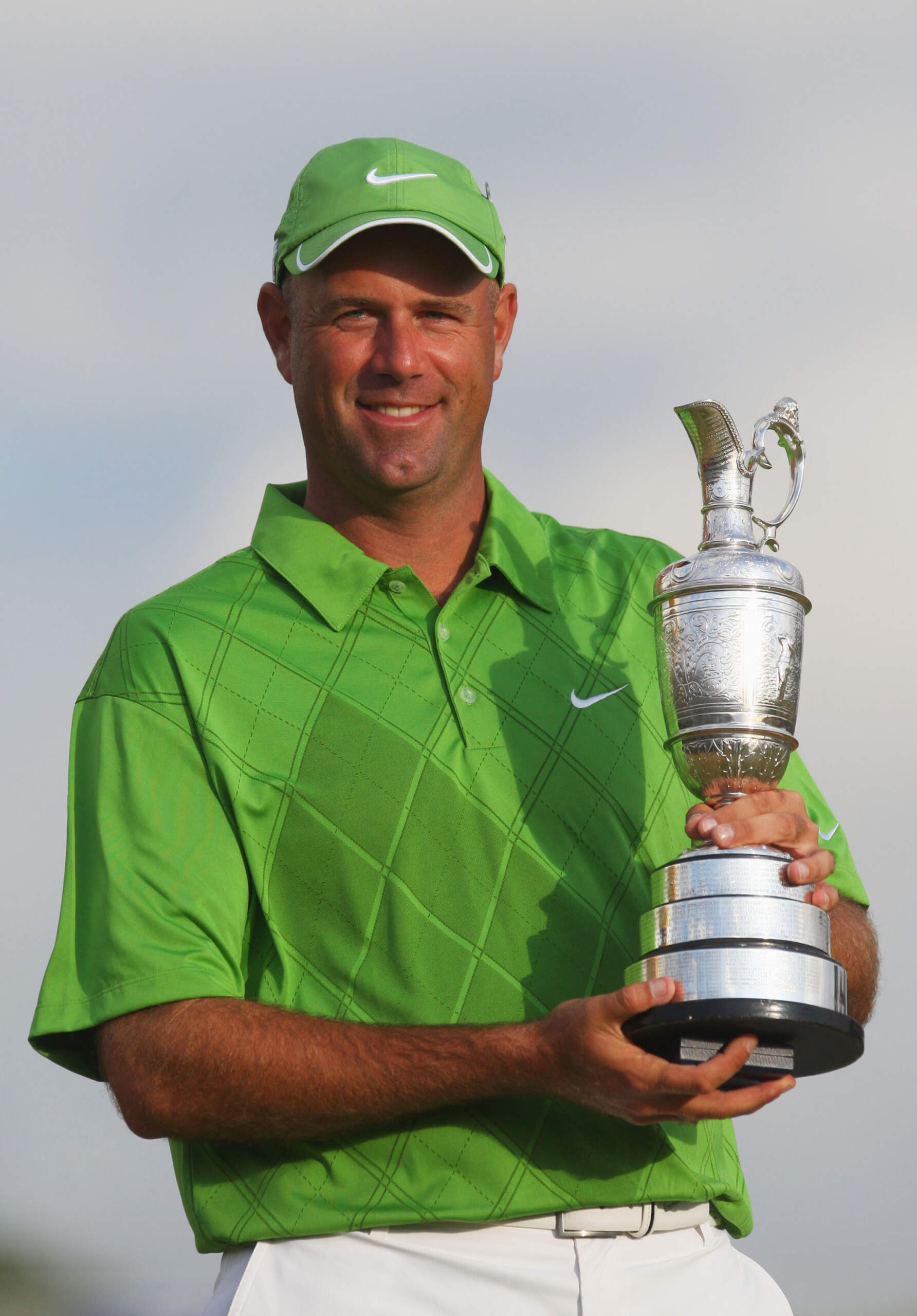 Cink outlasted Tom Watson to win the Open Championship in 2009.

EC: You talked about your sons Connor and Reagan earlier, and I know you are married to your high school sweetheart, Lisa. What’s the most rewarding part of your family life?

Cink: “Lisa and I have been through a lot going back to high school, but the most impactful has been Lisa’s cancer battle. She was diagnosed with breast cancer in 2016 and it’s in remission, but it was in Stage IV when they found it, so she’s on indefinite treatment. She’s our No. 1, the most important part of the family.”

EC: How has Lisa’s cancer struggle changed your life?

Cink: “You hear someone has been diagnosed with breast cancer and is in remission, but that doesn’t tell enough of the story. You can’t grasp all the peripheral things that take a toll. I try to mentor the caregivers I meet because I’ve been through that. It’s constantly two steps forward, three steps back. You think you are doing a good job, and you’re just not. It’s the simple stuff that no doctor or anybody else — except those who have been through it — tells you about.

“Amy Mickelson was a great source of that for us. She beat breast cancer, and she told Lisa, ‘You’ll have cape days where you feel like Superman, and you’ll have cave days where you don’t want to get out from under the covers — don’t be afraid of either.’ A lot of things you learn that you don’t think you’ll ever have to learn. Sometimes being brave means admitting how unbrave you feel.”