#TGW: What We Learned - Offense

There is still plenty of room to wonder about what Georgia Tech football will look like in the fall, but a few things seemed to be made clear as the Yellow Jackets wrapped up spring practice on April 26 in front of a GT spring game record crowd of 21,194 at Bobby Dodd Stadium.

This team is going to utilize the forward pass much more than the past 11 squads, the quarterback is not always going to be under center. Those are not shocking proclamations, but some numbers make it more amazing.

The White and Gold teams combined to attempt 61 passes when adding sacks to actual passes thrown (and not counting scrambles from pass situations), to complement 55 rush attempts.

That kind of thing hasn’t happened at Georgia Tech in a long time.

For context, look at the last two years, when new head coach Geoff Collins was the head coach at Temple and new offense coordinator Dave Patenaude was in the same role in north Philly.

These Jackets are going to be more balanced.

“It felt great to let the nation know that we can throw the ball, not just run it every down,” said redshirt freshman James Graham, who threw 10 passes, including a picturesque 39-yard touchdown pass to wide receiver Adonicas Sanders. “I’m glad we’ve got a new system.”

The Jackets aren’t going to abandon the run, but they’re sure going to embrace the pass.

The leading receiver in the game was running back Jordan Mason. He banked five receptions.

The aerial display started right away.

On the first play of the scrimmage, Gold quarterback Lucas Johnson (below) lined up under center and the Jackets were in the very formation that Tech rode the past 11 seasons under now-retired head coach Paul Johnson. 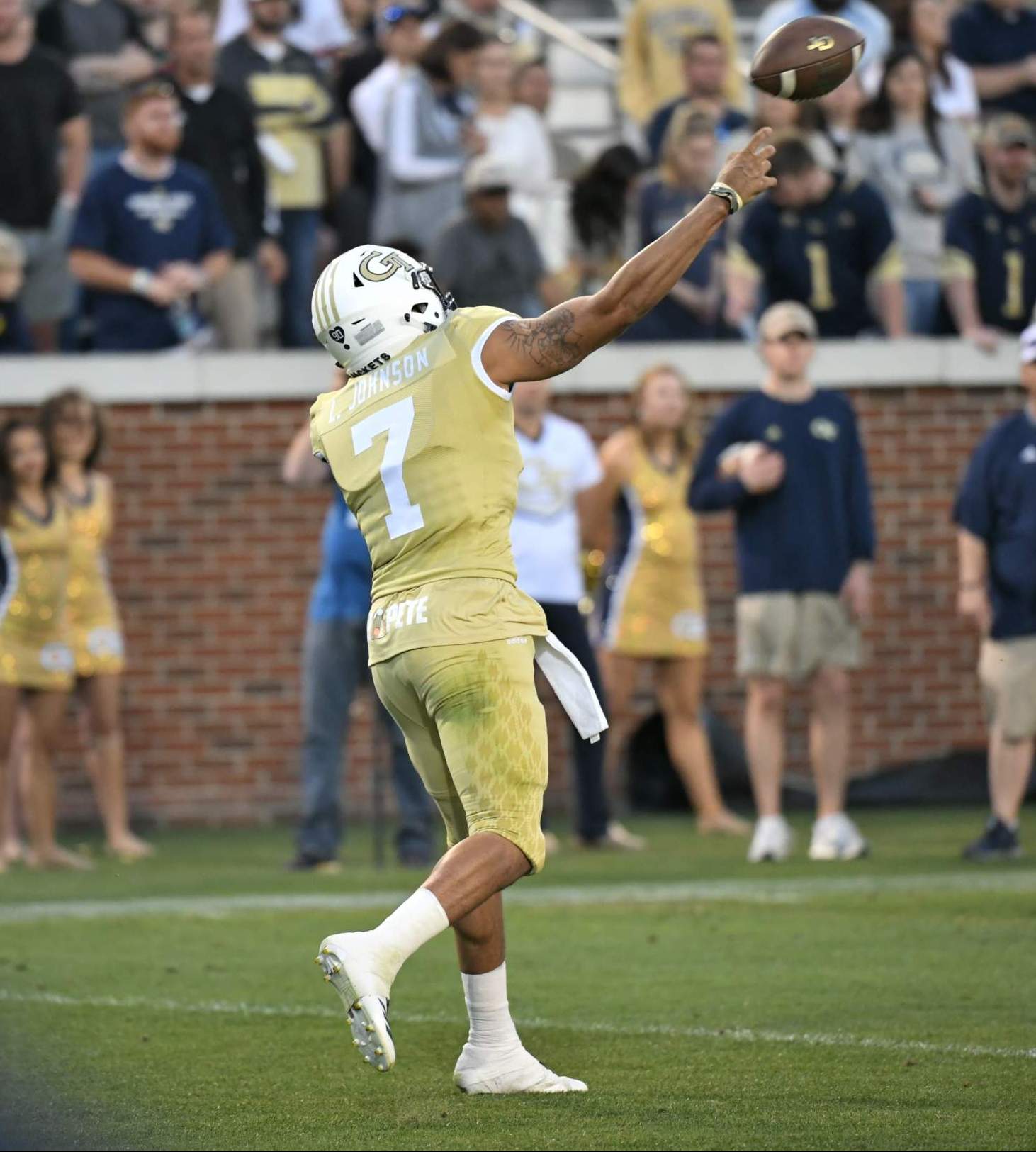 Then, the young Johnson audibled out and dropped into the shotgun as the formation spilt. The record crowd cheered, and when he threw over the middle for 12 yards to tight end Tyler Cooksey (a former linebacker – remember, Tech didn’t have tight ends for 11 seasons), fans cheered yet again.

“A little homage to the past on that first play,” Collins said. “Line up in double slot, shift in to empty, to shotgun, throw to a tight end . . . “

It’s prudent to suspend complete judgement given that the defense coordinated by Andrew Thacker was limited by Collins’ decision to keep defensive play calls simple. There were no fancy blitz packages. But still, you could tell that the Jackets are going to throw the ball in the future with regularity.

“Let’s be honest. People want to come to the spring game and they want to see some points, they want to see the ball being moved,” Collins said. “As a defensive guy for my career, that’s a tough pill to swallow at times, but I’m the head coach and we’re going to spread it out and limit what the defense does.”

Tech legend Calvin Johnson (below), who was in attendance, surely was proud. 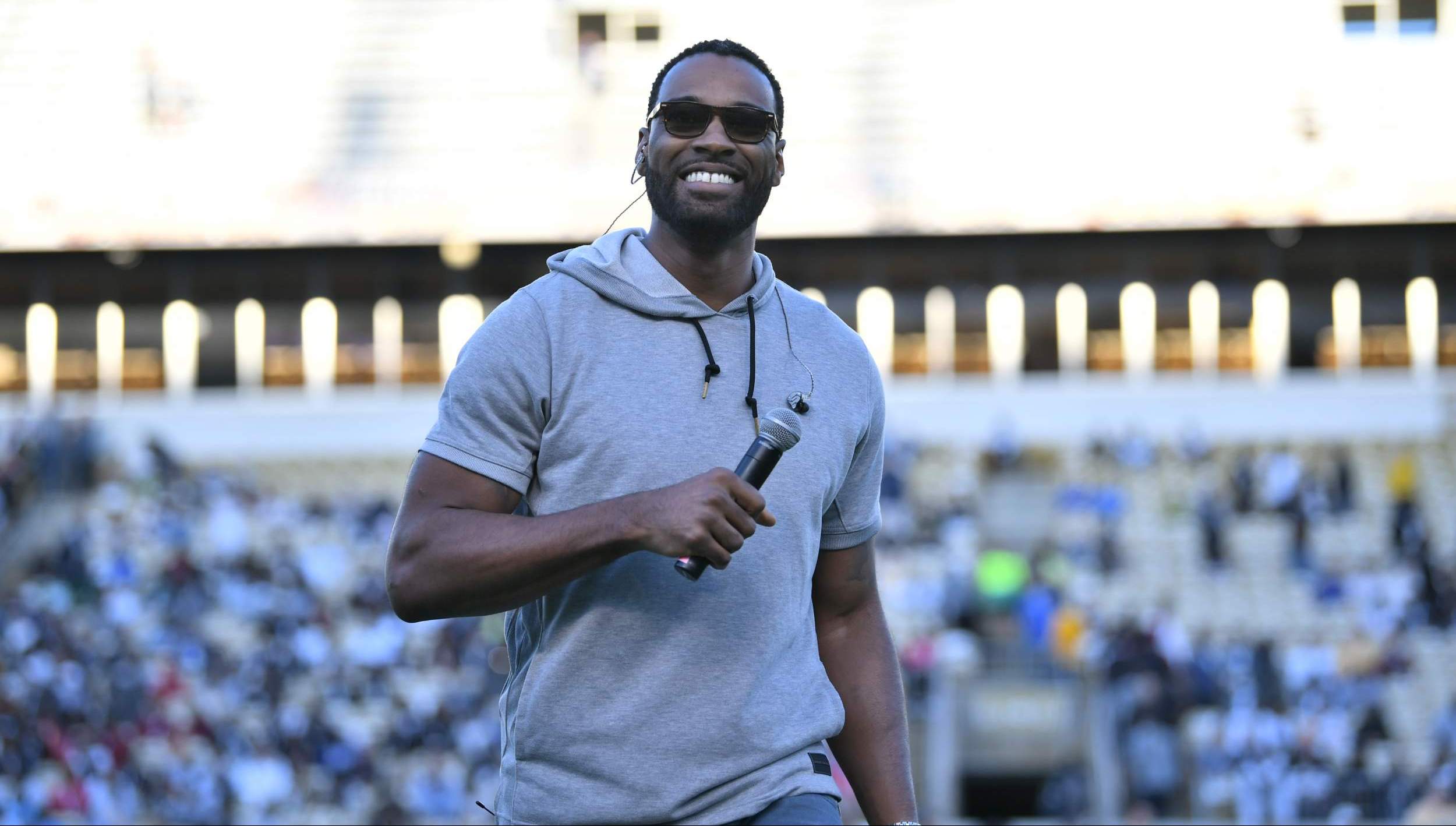 On the White’s second offensive play from scrimmage, Graham took the snap, looked left, waited a moment for Sanders – a third-year sophomore — to gather speed, and heaved the ball toward the southeast corner of the stadium.

When was the last time you heard anything like that from a Georgia Tech football player? That’s the way Reggie Ball – who was at the game – used to do it when he had Calvin Johnson on the other end.

Sanders pulled the ball in for a 39-yard touchdown. Everybody, except the defense, was happy.

“In the last offense, I didn’t really have a chance to showcase my talents. Now that Coach Collins came in we started to run the spread offense, and that’s my kind of offense . . . “ he said. “All spring, me and James had a great connection . . . Now in the spread offense, [I’m] getting targets.”

Up front, the offensive line may remain unsettled but it’s far from untalented or inexperienced.

Roster juggling will likely continue to some degree during the season. That was Collins’ history at Temple.

Truth be told, it’s impossible to say what the Jackets are going to look like offensively at any position in the fall.

Several offensive players flashed in the spring game, particularly among those catching footballs. Cooksey, the converted linebacker, caught three passes. Ahmarean Brown, the early-enrollee from Tampa who was allegedly crazy fast, caught two, including a 4-yard touchdown. The allegations have been proven – the young wide receiver is definitely fast.

Among the 13 who had carries jumped out, redshirt freshman Christian Malloy (below) had a few moments for the Gold team. 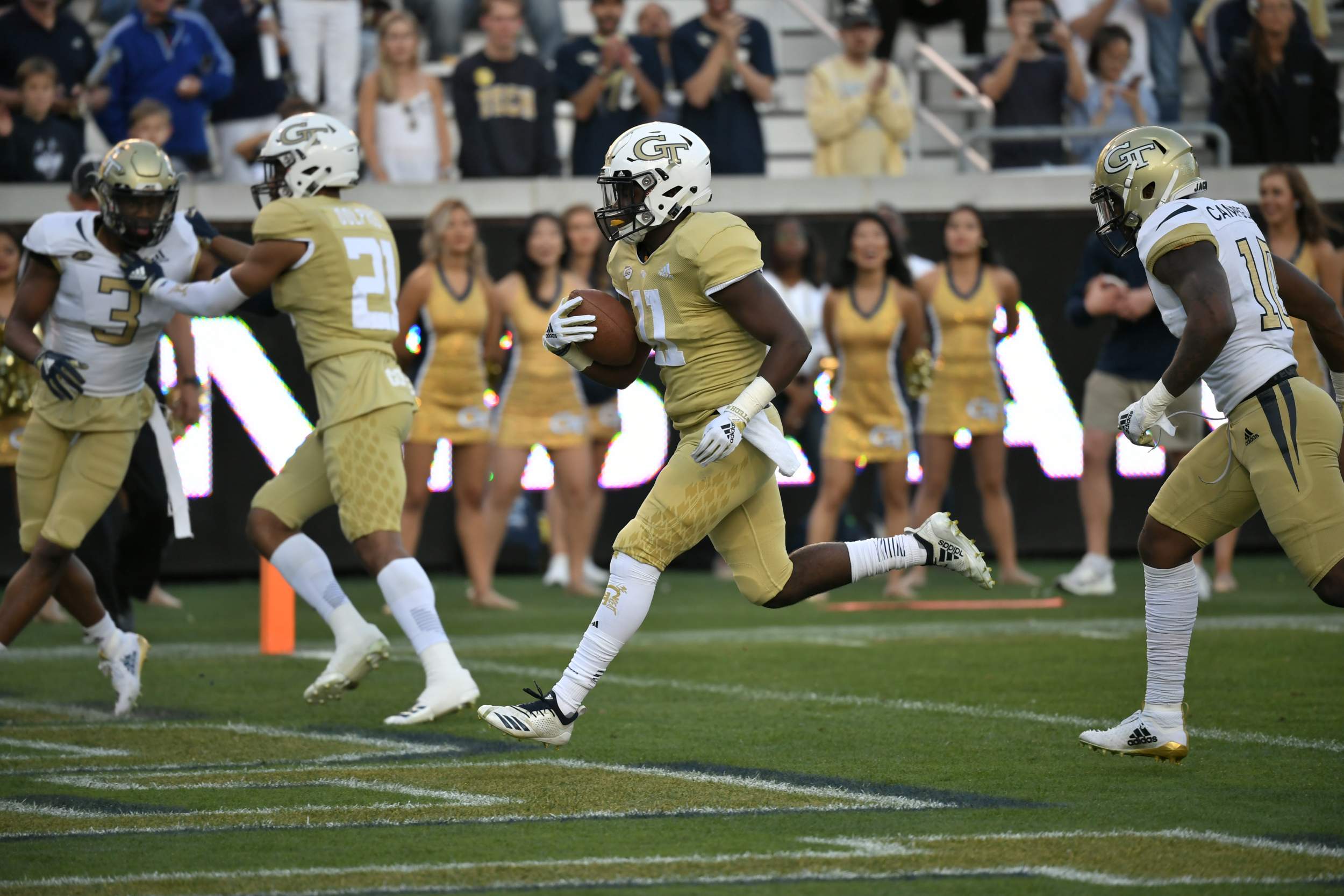 Odd thing was, Graham had 10 carries, which tied Malloy (who rushed for 38 yards) for the game high.

That’s like old Georgia Tech football. But new Tech football will rely on more than QBs and fullbacks to carry the brunt of the offense, that’s for sure.

Coaches are on the recruiting trail now, and support staff is figuring everything out.

“That will be our task of quality control, the [graduate assistants], the analysts for the next four weeks while all the full-time coaches are out on the road recruiting,” Collins said. “They will dive into all of that data …