It was late by the standards of competition, and the thin air in Pullman, Wash., was stretched out even more by Georgia Tech’s recent history when Connor Howe – the freshman – found major oxygen in the NCAA regional and put the Yellow Jackets on his back.

Tech missed qualifying from an NCAA regional to nationals last year by that much.

And they were tickling the mess again in the home stretch last week. Then, Howe went birdie-birdie over the final two holes to push Tech into the NCAAs.

That will be a complex format. All 30 teams and six individuals will play rounds Friday-Sunday, and then the team field will be cut to 15 for another round to be played Monday. An individual champion will then be crowned and the low eight teams will go into match play over Tuesday and Wednesday seeded on the basis of stroke-play finish.

As he looked back on his final two holes at the Palouse Ridge Golf Club aside the Washington State campus, he recalled, “I knew we weren’t having an outstanding day.”

This is not supposed to happen to Georgia Tech golf, where the No. 7 Jackets made the big dance in 16 of head coach Bruce Heppler’s first 20 seasons, and finished runner-up three times. The most successful coach in all of Tech athletic history has 13 ACC titles on his resume, and the Jackets went west fairly fresh from winning their 18th overall ACC championship with a record score of 37-under par 827 a month ago at the Old North State Club in New London, N.C.

They won by 15 over Virginia. 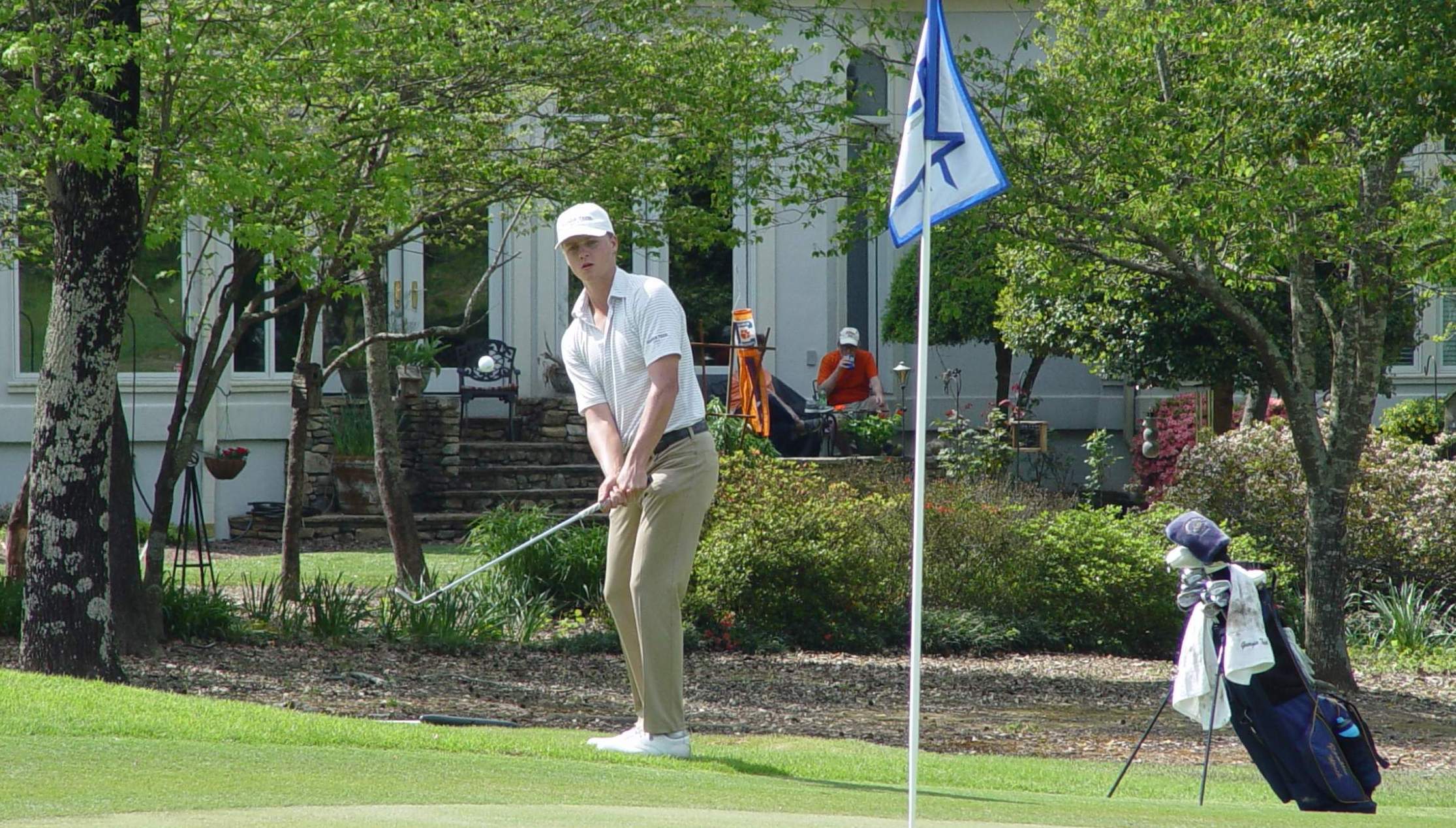 Connor Howe posted his best finish at the ACC Championship with a tie for 14th place.

But recent history was breathing down their necks like a dragon might, as they were locked in a battle with Colorado State and South Carolina for the fourth, fifth and six spots. Five would qualify out of the regional for NCAAs. The sixth-place team would put the clubs away for good.

In Heppler’s 24th season at Tech, Howe, the longshot from Ogden, Utah, went birdie-birdie on holes 17 and 18 and Tech avoided a playoff with Colorado State and South Carolina by one shot as every other older Jacket parred the last.

Connor pushed Tech over the edge and into the Natty at the Blessings Golf Club in Fayetteville, Ark.

Tech missed the NCAA’s in four of Heppler’s first 20 seasons as head coach, and then three straight before Pullman.

This was a big deal, and Howe made it bigger. The Jackets avoided a playoff with Colorado State and South Carolina by one shot.

And Howe, the lean, 6-foot-1 impossibly unflappable twin from Ogden, Utah, turned out to be the Jackets’ best closer.

“His body language has been as flat-line as anyone we’ve ever had,” Heppler said. “His composure is as good as anyone who’s every stepped in the door here.

“You come to every trip, you couldn’t tell whether he’s 5-under, 6-under, had a bad day, had a good day … it’s total flat line. I think it’s his greatest asset. It allows him to birdie the last few holes. He just doesn’t get discouraged.”

It’s little bit funny for Heppler to say that.

At times in the past he’s lamented the fact that most Tech golfers have fit their school. They’re usually calculated. They less frequently take risks, and rather play numbers and percentages. Heppler’s been known to admire – gasp! – Georgia golfers who go for it, like, say, Bubba Watson.

His best three finishes of the school year have come in his last three events – he tied for 22nd in the Clemson Invitational, tied for 14th in the ACC Championship, and tied for 17th in the NCAA regional after shooting 66-70-68=270.

On the one hand, this ought to be considered a surprise.

Beginning with Tech’s victory at the Clemson Invitational, Howe (second from right) has shot a cumulative 14-under-par over his last nine rounds.

Howe joined a really good golf team, as juniors Tyler Strafaci, Luke Schniederjans and Andy Ogletree were entrenched in the lineup and sophomore Noah Norton was locked in after a solid freshman season. Oh, and fifth-year senior James Clark – Tech’s MVP in 2017 – was coming off a redshirt year.

And yet Howe showed right away upon arriving on campus that he was perhaps different.
When strength and conditioning coach Steve Tamborra tried to ease him into a weight-lifting program, Howe basically said, “Nah!”

“Steve tries to bring them along in the workouts and not put them in the grave right away as they’re going through qualifying to go to Dalton (the first tournament of the fall), and he just wanted nothing to do with that,” Heppler said. “Get rid of the kettle ball squats and get me a bar. He just didn’t want to be a freshman.”

“That’s right. Before I got here, I’d been working out back home for a couple years just trying to get stronger. I didn’t feel like I needed to start at the beginner level,” he said. “I wasn’t being rude to Steve, I just felt like I knew what I was doing. I just wanted to get started. I think he kind of saw as I first got in there that I was comfortable around the weights.”

And he had no patience for the idea of redshirting, like fellow freshmen Bartley Forrester and Luke Karaulic, nor Ben Smith and Will Dickson in the class ahead of him.

“I think he just had his mind made up that he wasn’t going to redshirt and he was going to play and that’s what turned out to happen,” Heppler said.

Howe missed Tech’s first tournament, the Carpet Capital Collegiate, then played three straight as an individual, and he’s been counting for the Jackets in the last six.

He beat out Clark, who is a very good golfer.

Howe didn’t make the Tech lineup for its first fall event, the Carpet Capital Collegiate, but has played every tournament since.

Heppler had an idea when he first saw Howe that he might be special.

The first recruiting stop every year is at an American Junior Golf Association (AJGA) even in Ringgold, Ga., the first week of June. Right after the NCAAs.

There, he first saw Howe in the summer before his junior year of high school. Howe and his twin brother, Hunter, had grown up playing a lot of sports and with a lot of college athletic history in their ancestry. By high school, Connor zeroed in on golf. Hunter nailed basketball.

There is not much AJGA action in their part of the country, so Connor came east to compete.

“It was funny. I’m just up there [in Ringgold] watching, and here comes a kid from Utah who’s got a wrap hat, flat bill, high white socks, and I’m thinking, ‘What is this kid doing all the way out here from Ogden?’” Heppler recalled. “So I’ve got to check him out, and he looked pretty good.”

Maybe Howe stuck in Heppler’s mind just a little bit more because the coach is from Utah, St. George to be specific.

“Coach being from Utah, and I kind of did well, and I think coach said, ‘Maybe I’ll give him a shot.’ I just kind of caught his eye,” Howe said.

Howe had his best junior finish in Ringgold, a top five, and Heppler changed his schedule to see Howe play more over the summer. And the next summer.

And the coach called Howe’s coach, Boyd Summerhays (brother of PGA Tour pro Daniel Summerhays). Boyd splits time coaching golf between Scottsdale, Ariz., and then Ogden, Utah in the summer. It didn’t hurt that Heppler recruited Boyd to Oklahoma State when Bruce was an assistant there in the early 1990s.

Bruce wanted to know: This guy doesn’t have much of a track record on the AJGA circuit, so what can you tell me about him?

Summerhays gave a gold review, and he remains central to Howe’s development. “The relationship with his teacher goes on,” Tech’s coach said.

Perhaps it helped that both Heppler and Howe are Mormon.

“Honestly, I’m a member of the church and so is he, so there’s a bit of a ‘let’s go find out what this is all about.’ His family would trust him away from home,” the coach said.

Even with all of this, it was never a slam dunk that Howe would come to Georgia. He blew away fields in high school, and had scholarship offers from a slew of programs.

He chose Georgia Tech, and that was made more difficult by the fact that his twin brother had fewer opportunities, and it became clear they would split.

Connor Howe surrendered basketball in high school, but his brother kept grinding at the sport, hoping to make more of it. Eventually, Hunter turned back to golf, and stayed home. He now plays golf upon partial scholarship at Weber State in his hometown of Ogden, Utah.

Howe is an interesting Yellow Jacket.

He’s traveled, and he’s all in on golf.

“He wanted to be like [the upper classmen], not looking to ease into stuff. He just wanted to jump in head first, and he’s been that way all year,” Heppler said. “Everything we’ve done, he’s done as much or more than everyone else.

“He just played his way into the lineup. After a year of learning how to go to school and do all that stuff, his best golf is coming out.”