There’s not a whole lot you can ever REALLY count on when it comes to sports drafts.

That certainly should have been especially true in last week’s Major League Baseball Draft.

Adding to the usual unpredictability that comes with every draft was the limit of five rounds — it’s usually 40 — and that teams had an extremely small window to scout players, a window that slammed shut on March 12 due to the Coronavirus.

Yet, evidently, even with the most unpredictable of unpredictable events, one thing has proven something of a given. That’s that at least two Georgia Tech baseball players will be selected by the time it’s over.

When the 2020 Draft was over — even with only five rounds — left fielder Michael Guldberg (Third round, No. 98 overall by the Oakland A’s) and right fielder Baron Radcliff (Fifth round, No. 146 overall by the Philadelphia Phillies) were off the board. It marked the 20th consecutive year that more than one Yellow Jacket was selected. It’s the nation’s seventh-longest current streak.

“I had a number in my head that we’d lose more than we lost for sure, but it was a crazy draft — only five rounds — and it looked like it got really crazy late (Thursday) night,” said Hall, who has now had 128 players selected some 145 times during his tenure. “We had a lot of guys in the mix and it just worked out that we only had two of them get the opportunity to go.”

The opportunity to get drafted was a dream-come-true for Guldberg and Radcliff, yet both were left with different perceptions of this draft night as Guldberg, who’d never been through a draft, couldn’t wait, while Radcliff, who was selected by the Braves in the 40th round in 2017, couldn’t wait any more.

“I felt going into the Draft that things were looking good but that Draft was an absolute roller coaster,” said Guldberg, a Marietta native who never batted below .355 in any of his three seasons, led the Jackets in hitting his last two seasons, was second in the ACC in 2019 and was leading the conference at a .450 clip in 2020 when the season was called. “With it cut down to five rounds, we didn’t really know exactly how all the teams were going to approach the situation. It was very back and forth the whole time and so I just had to stick with it, try not to worry about it too much and just enjoy it.

“When I heard my name called, I was just glad to be there with my family and a few friends,” he added. “It’s so much excitement. I’m so excited to get started with the A’s.”

Guldberg admitted he had his nerves calmed with an approximate 10-minute heads-up when his name was about to be called. Radcliff, on the other hand, endured round-by-round “any second now” calls from his agent. It resulted in his going from excited anticipation to exasperated anxiety, even wondering if he’d hear his name at all.

“I kind of slid way down lower than they were expecting me to go from talking to my agent beforehand,” said Radcliff, who was setting career-highs in batting average (.259) and slugging (.550) when ‘20 was cancelled — a 79-point jump in average and a 198-point spike in slugging from freshman year. “Once those picks were kind of flying off the board, it turned into, ‘Alright, who’s going to realize that I’m still sitting here?’ I got that Phillies call and that was a huge relief. It’s an opportunity for me to have a foot in the door in professional baseball. So I’m excited.”

Thoughts about what team they’ll represent have now been replaced by where — and maybe more important, when — they’ll begin representing.

When you think about it, the A’s are Guldberg’s perfect team. It’s certainly something with which he’s been associated at Georgia Tech. In fact, hours before hearing his name chosen by the A’s in the Draft, he was rewarded for his A’s in the classroom, becoming only the second Yellow Jackets baseball player to earn multiple First-Team Academic All-America selections, joining L.J. Yankosky, who did it in 1997 and ‘98.

Beyond excited to be a part of this organization! So thankful for this opportunity, and I can’t wait to get started on this journey with the A’s! https://t.co/daOYgePQUn

“It really has been like a dream. The Academic All-American means the world to me,” said Guldberg, who had a 3.90 GPA in industrial engineering this year to complete the back-to-back first-team academic all-America. “Everybody at Tech has given me every opportunity to be both and be as good as I can possibly be at both. I can’t thank my coaches and my teammates and all my support staff enough for doing that for me.

“I take my academics very seriously, I took everything that I’ve done here very seriously,” he added. “The group of, particularly first-team academic all-Americans at Georgia Tech is just unbelievable — I mean L.J. Yankoski, Nomar Garciaparra, Mark Teixeira and then I think, me. To be grouped in with those names is, I can’t even tell you how great of an honor that is.”

Guldberg also is serious about finishing his degree.

“Right now we’re in a holding pattern,” he said. “Wait and see what they want to do. So we’ll just have to see how the A’s want to approach it.”

He admitted that he liked the A’s approach and likes it even more and more based on what he’s heard from former Jackets teammate Kyle McCann, who was selected by the A’s on the fourth round (No. 134 overall) of last year’s Draft. 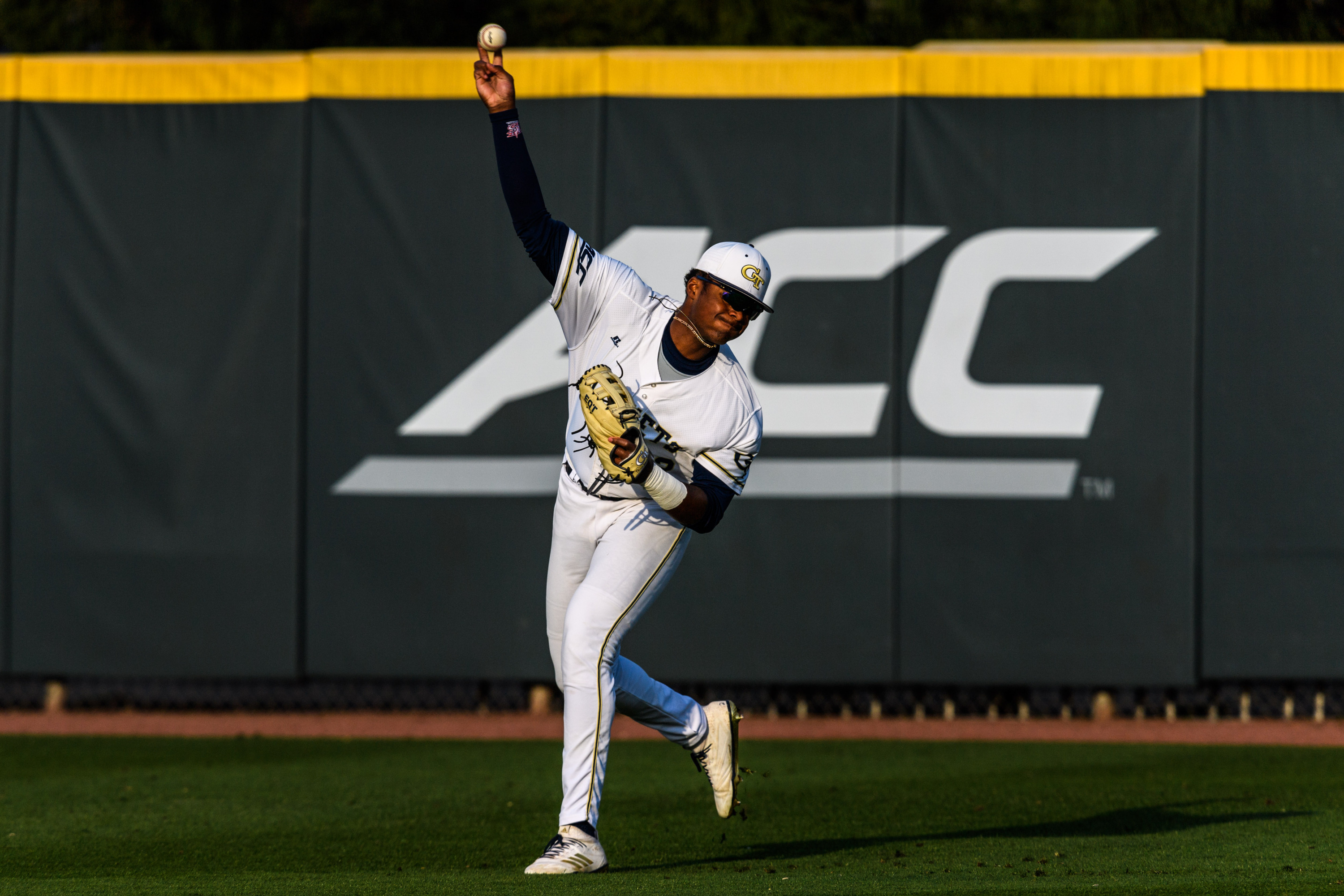 While Radcliff enjoyed the phone call he answered from Philadelphia, it wasn’t nearly as enjoyable as the one he DIDN’T answer from Las Vegas, which turned out to be Phillies All-Star outfielder Bryce Harper.

“It’s crazy because at like 11:30 (Thursday) night I got a call from a Las Vegas number, so I didn’t answer it,” Radcliff recalled with a laugh. “Then I saw that he tweeted me and I was like, ‘Wait a minute.’ So I called the number back and it was HIM on the phone, so he FaceTimed. When I saw his face I dropped my phone on the floor. Bryce Harper is one of my favorite players. So for him to Tweet at me, then FaceTime me, it was unbelievable.”

“He said he couldn’t wait to have another power lefty bat up in ‘The Bank’ with him,” he said. “He commented on the 470-foot home run (May 16, 2019 against Pittsburgh) and then I said, ‘I’m just trying to get like you, man.’ He said, ‘I don’t even know if I can do that.’ It was really cool. I’m going into my rookie year so that gives me all the confidence in the world that this guy knows what I can do. That was really cool.”

Radcliff also found the reception he’s gotten from Phillies fans really cool, noting that he got more than 700 followers on his Twitter account following Harper’s tweet.

“These Phillies fans are blowing me up talking about me and how excited they are that they got me,” he said. “I thought ‘Alright, people might be mad because they picked me,’ but I haven’t seen one negative comment. Their fans are blowing up my social media, showing a lot of love. I know they get hostile to a point but at the end of the day, those are still going to be MY fans. I’m still going to do everything I can to please them. You can’t please everybody but it’s definitely something that I won’t take personally. They just want their team to win.”

The ultimate goal for Baron is to one day take aim at Citizens Bank, which is 330 down the right-field line, four feet shorter than Russ Chandler Stadium. That’s what he’s working hard for and waiting for another call, which he’ll certainly answer.

“As of right now, it’s basically we just know that whenever we get out of quarantine, we’ll be going to Clearwater, which is their Spring Training facility down in Florida,” he said. “I’ve been working out three days a week — long-toss three days a week, I hit every single day. I’m trying to do as much baseball activity as possible.”

When Radcliff gets to Clearwater, he, like Guldberg, will have a former Yellow Jacket teammate to talk with, as he’ll get to team up with Hughes. 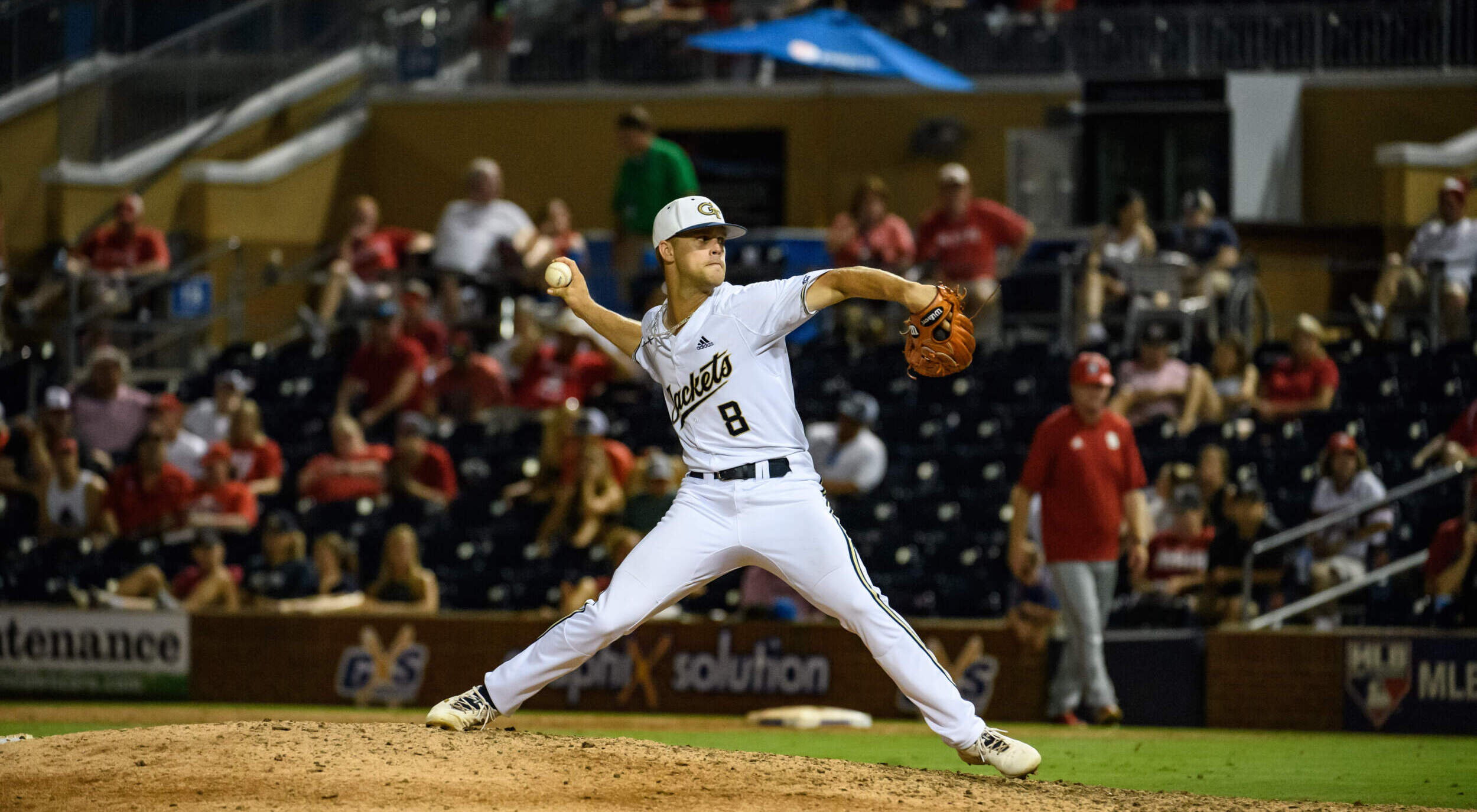 The 6-2, 195-pound right-hander, from Flowery Branch, a second-round pick of the Baltimore Orioles in 2015, may have been victimized by the shorter draft but didn’t have to wait long to get over any disappointment.

Of course, overcoming adversity is what Hughes is all about. He came back from non-Tommy John elbow surgery his freshman year, re-invented himself from overpowering starter to solid late-game arm out of the bullpen (9-2 in 2019), then came back full-circle as a starter in 2020. He was 2-1 in 2020, with a career-low 4.15 ERA. More important, his control was impeccable. He put up a 20:6 strikeouts-to-walks ratio and was holding hitters to a career-low .221 batting average. His trending upward led to his signing as an undrafted free agent, much like Hall predicted on a Zoom call on Friday.

“I think he’ll have every opportunity to sign as a free agent. I think his best days are still ahead of him,” he said. “I would expect, hopefully by next week, he’ll have some offers on the table. I think he’ll get more than one offer.”

The Phillies offer may not have been the only offer, but it was the right one.

Guldberg, Radcliff and Hughes believe their time is right and it’s time to play ball!