All three games are scheduled to be video streamed live on the ACC Network Extra (link located above).

The three ACC contests will also be broadcast live on WREK 91.1 FM radio and online at WREK.org.

Live stats for all three games at Virginia can be found above or on the baseball schedule page at RamblinWreck.com.

Monday night’s prime time contest will be televised on ESPNU.

The midweek conference tilt will also be broadcast live on WREK 91.1 FM radio and online at WREK.org.

Live stats for the home game can be found above or on the baseball schedule page at RamblinWreck.com.

Yellow Jacket fans can now pay for parking ahead of time by going online to Park Mobile (Click Here). Klaus Deck (across from Cherry Street and the third base side of Russ Chandler Stadium) will be open for fans for $5.

There are just two ACC weekend series remaining for the Jackets in the 2018 regular season. Tech, who enters play at UVA this weekend at 11-13 in league play, needs to win both series to help assure themselves a .500 league record and a chance at making an NCAA regional.

No. 3 Wade Bailey is looking to close out his four years on The Flats with a career milestone, as the second basemen is chasing down career hit No. 300. He enters play this weekend with 276 base hits, 24 shy of the career mark. He would be just the fourth Jacket to reach 300 career hits at Tech.

Georgia Tech is 14-4 this season when posting a big inning offensively, meaning scoring four runs or more in an inning for the game. The Jackets have totaled 23 big innings this season, including scoring a season-high seven runs in the fifth inning of a 16-3 win versus Florida State (April 8).

The Yellow Jackets are 6-6 in ACC Coastal Division play this season with series wins over Virginia Tech (March 16-18) and Miami (March 30-April 1). Five of the six wins have come at home, while the lone Coastal Division road win came in the Friday night series opener at Pitt on April 13. Tech went 3-0 versus Miami, 2-1 against Virginia Tech, 1-2 at Pitt and 0-3 at North Carolina in division play this year.

To close out the 2018 regular season, the Yellow Jackets will play seven games over nine days. Tech will play three games versus Virginia over a four-day span from Friday to Monday, May 11-14, turn around to host SEMO on Tuesday, May 15, before taking off Wednesday prior to a three-game series at home versus Duke on May 17-19.

After getting swept on the road at then-No. 8 North Carolina on April 20-22, the Jackets have bounced back to go 5-3 over their last eight games with two of those losses coming to the nationally ranked Georgia Bulldogs. The five wins include two over Wake Forest in ACC play and a three-game series sweep of Radford in non-conference action to start the month of May.

The Yellow Jackets’ pitching staff is averaging 9.0 strikeouts per game this season. Tech’s arms are also averaging 9.1 strikeouts-per-nine innings on the year.

Tech has a total of 13 different players this season that have hit at least one home run, highlighted by double-digit home runs from Kyle McCann (14) and Joey Bart (12).

Following three games at Virginia and a home tilt at home versus SEMO on Tuesday night, the Yellow Jackets will wrap up its 2018 regular season with a three-game ACC series at home on Thursday, Friday and Saturday, May 17-19, versus the Duke Blue Devils. 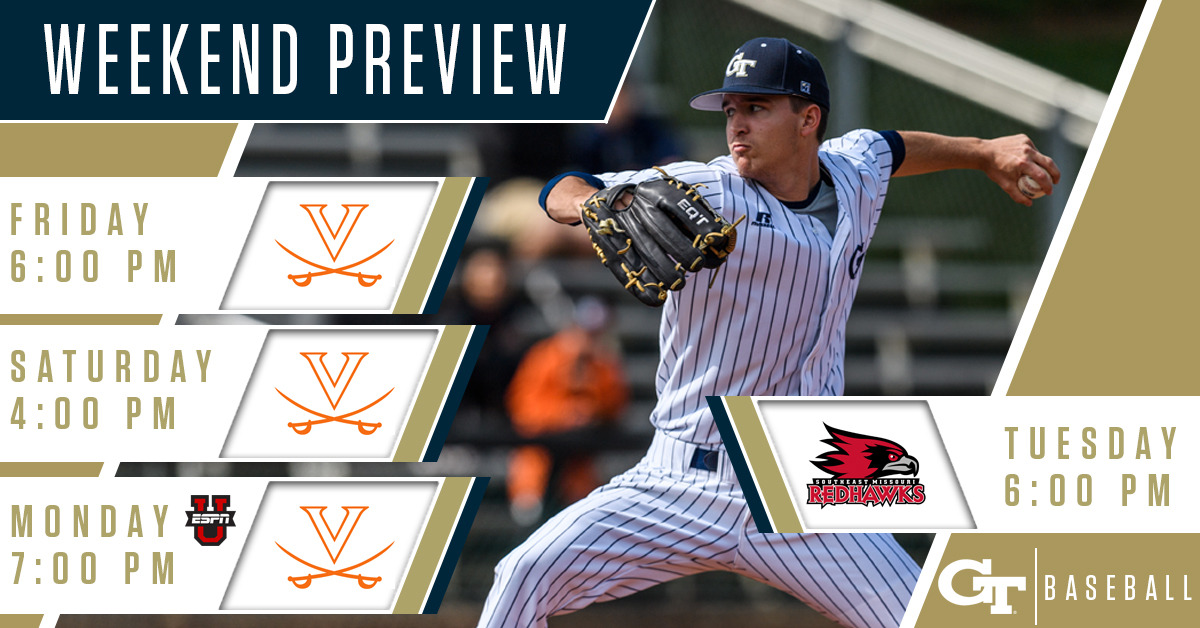