Inside The Chart: Plenty to Prove

The sophomore had just taken a seat inside Geoff Collins’ office, ready to begin his 15-minute meeting with Georgia Tech’s new head coach. In the frenzy of those first few weeks, Collins had asked to meet with each of his returning players in informal, 15-minute, “getting to know you” sessions. He wanted to learn more about the players he inherited; get their thoughts on the program; maybe answer any questions they had.

Collins, it turns out, had a question for Thomas.

“He was like, ‘How do you feel about being a leader?’ I was shocked,” Thomas recalled.

“I didn’t think that would be the first thing he’d ask me. I really wasn’t even sure if he knew me or not.”

Collins, of course, had already done some scouting on the 6-3, 216-pounder.  He knew about Thomas’ exploits as a kick returner, where he scored a pair of touchdowns and earned freshman All-American status in 2018. He saw his potential at safety, where he returned an interception 95 yards for a touchdown against Louisville.

But even before that first face-to-face, Collins knew Thomas’ personality, as much as his playmaking, could be a cornerstone for his culture. Becoming an impact player seemed a given. Getting Thomas to become an impact leader, Collins thought, could be just as valuable.

“Everybody can reward a great player if they want to. But the leadership, being a great teammate, being competitive, being tough, giving relentless effort – those are the things that really move the needle for us as a coaching staff,” Collins said. 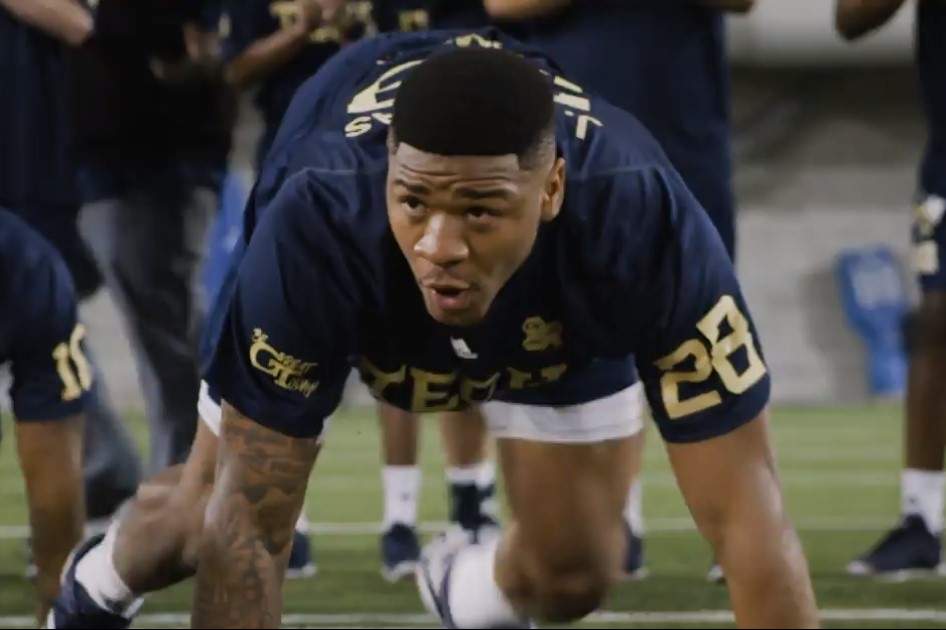 According to Thomas, the tests started almost immediately.

“He had me go to meetings with the older guys and stuff. He was letting me get the feel of it. It helped me get in that role more,” he said.

Thomas studied the veterans, how they carried themselves and connected with teammates. Always ebullient, he tried to channel his charisma into something deeper. He embraced the challenge of becoming a stronger voice on the team – ironic, Thomas admits, since he has dealt with a stutter since he was “four or five” and took speech therapy lessons as a kid.

(For the record, he’s completely unbothered by it – he and teammate Tariq Carpenter have taken to calling themselves the “Stutter Gods” on social media. He says it only flares up when he talks fast.)

“He’s got great energy, great body language. He carries other people with him. He affects other people some players as much as we talk about positively affecting your teammates – he’s one that just naturally does it,” said defensive coordinator Andrew Thacker.

It wasn’t always a smooth process. Thomas initially earned one of Collins’ coveted single-digit uniform numbers, changing from No. 28 to No. 1 at the start of spring practice. In addition to wearing it in high school, Thomas says the number is an extension of a personal mantra.

“Honestly, I have my own slogan – ‘One-Way Juanyeh.’ There’s only one way, and that’s the right way,” Thomas explained.

Collins, though, didn’t see Thomas living up to his slogan.

“Little-known fact about Juanyeh:  he had [the No. 1] in the spring, lost it over the summer, and had to earn a 3.0 GPA to get it back for preseason camp. And he did it, because everything in our program matters – academics even more so. He put the time and put the dedication in to earn that jersey No. 1 again,” Collins said.

He’s now focused on more pertinent numbers, like the ones that drew him rave reviews during his rookie season. Thomas set five school records in 2018, becoming the first Tech freshman to return two kickoffs for a touchdown in a season. His 100-yard runback against Georgia (below) was the longest by a Yellow Jacket in Clean, Old Fashioned Hate since 1978. 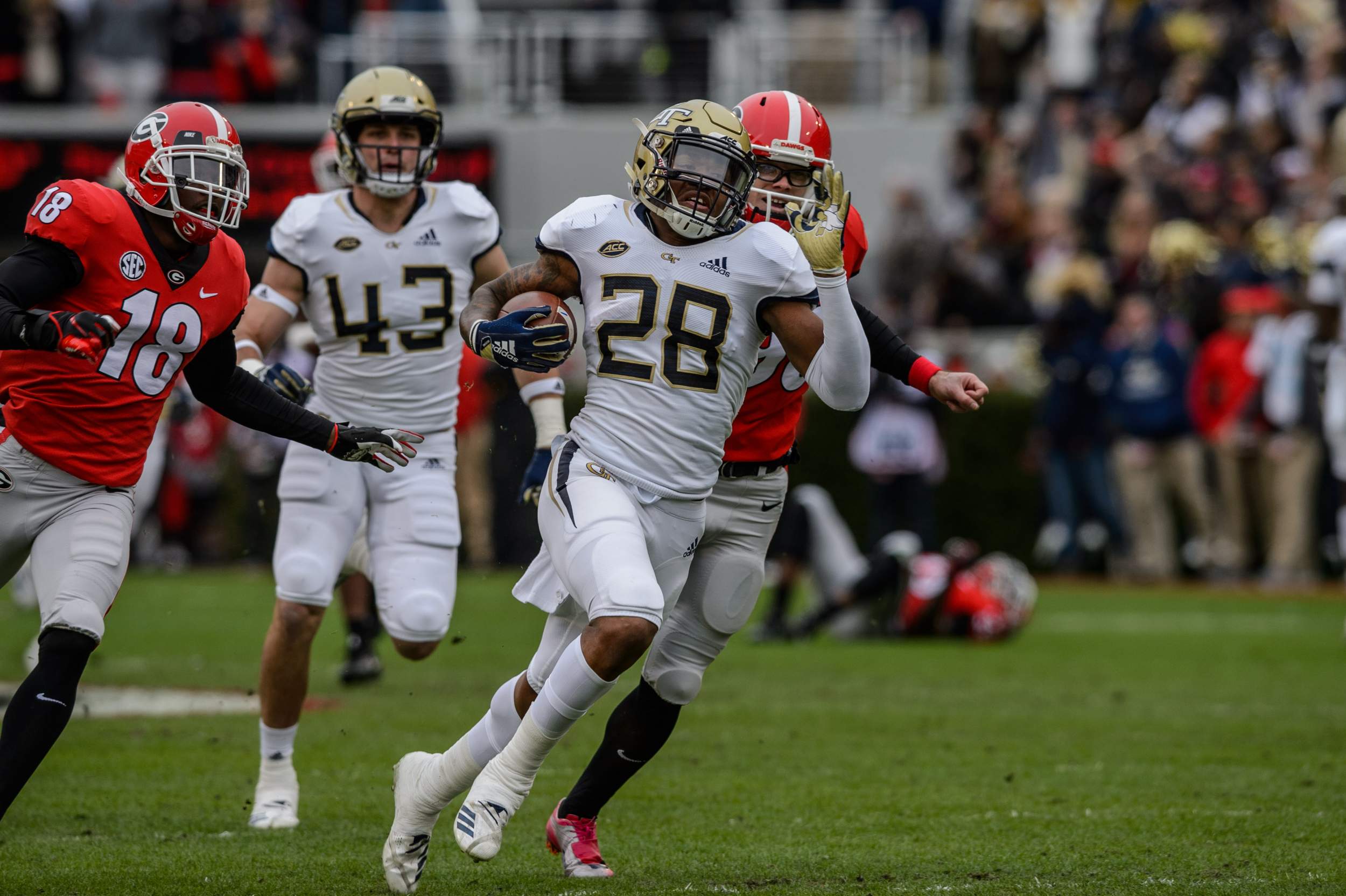 Yet for all his talents on special teams, Thomas is hungry to show he’s just as dangerous at safety, where he once set a national high school record by returning an interception for a touchdown in five-straight games.  As a freshman, Thomas found himself backlogged behind graduate transfer Malik Rivera, a cerebral veteran who was already well-versed in defensive coordinator Nate Woody’s system.  Rivera finished the year as the Yellow Jackets’ leading tackler; Thomas only finished with three defensive tackles.

He knows how meager those numbers look compared to his fireworks on special teams.

“Honestly, I have a lot to prove to people,” he said.

Yet Thacker, a former four-year starting safety at Furman, sees the speed, size and change of direction that can make Thomas a dominant tackler at safety. A full offseason, he says, has allowed the mental side to catch up with the physical side.

“He was acclimatizing to college football, and all the communications that you have to make, and all the pre-snap information you have to know and process to be able to play fast. So that’s the biggest gap that he’s bridged,” Thacker added.

The process of cashing in on those expectations starts Thursday. But Thomas knows a breakthrough may not come had he not accepted the challenge that Collins laid on him in that first 15-minute meeting.

He dedicated himself to growing as a leader. Come Thursday, he’s ready to show how much it made him grow as a player.

Said Thomas: “It’s one of those things, you’ve got to watch me work.”